At this time of year I don't often write about food, because I normally want to describe what's going on in the garden. It doesn't mean that I'm not cooking though. For practical reasons Jane does most of the cooking, but I try to cook at least one main meal a week. So here is one of my offerings: Stir-fried Beef with Black Bean sauce and tomatoes. I'll admit straight away that I used commercial Black Bean sauce from a packet!

This was the first stage of the proceedings - prepare and marinate the main ingredients. 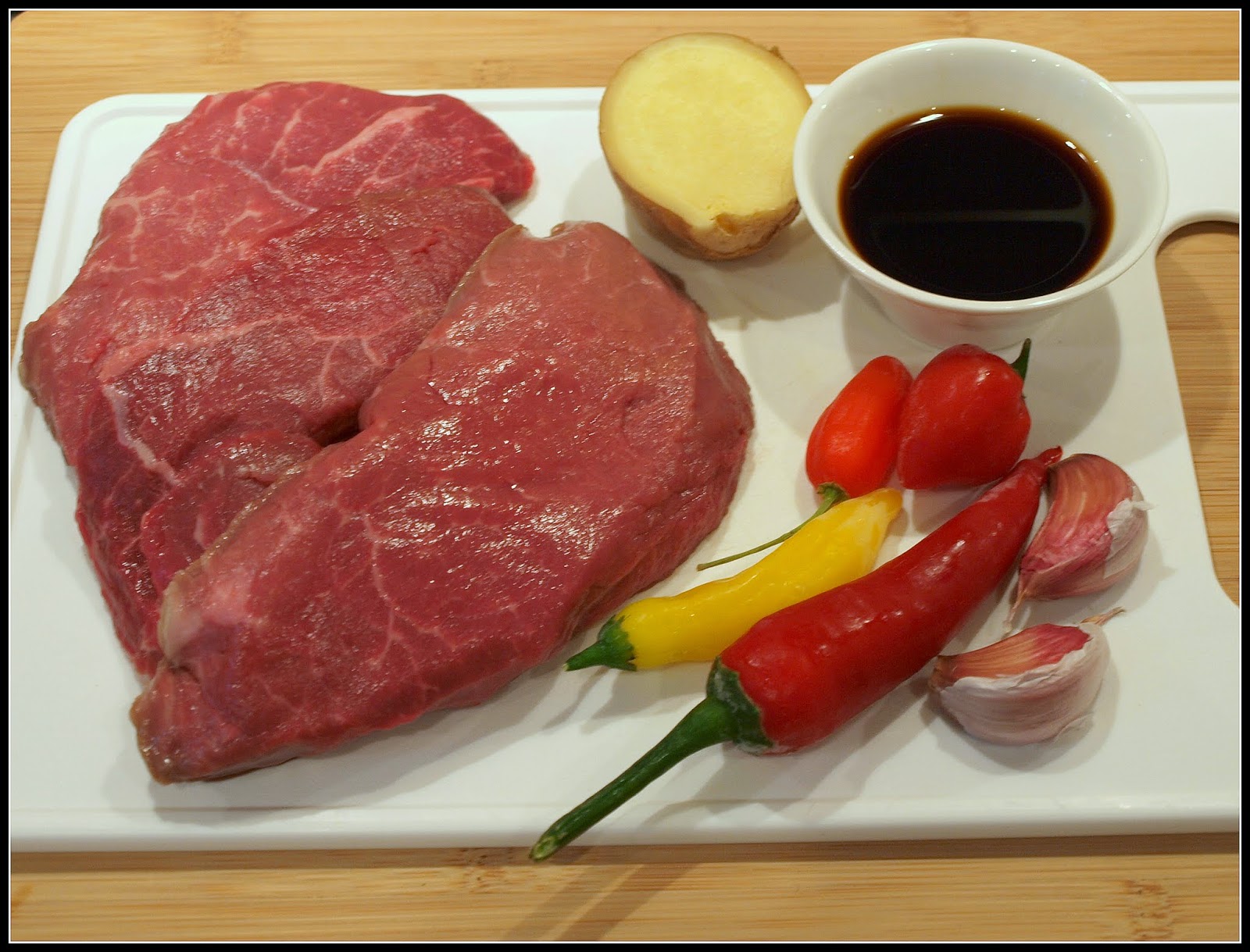 The meat I used was described as "Frying Steak". I sliced it into very thin strips so that it would cook quickly. My marinade included Garlic, Chillis and fresh Ginger, and was moistened with Soy Sauce. I used a number of different chillis, some to add flavour (especially the yellow "Aji Limon"), and some to add heat (e.g. the "Scotch Bonnet"). My intention was that the chillis would be discarded before cooking commenced, so I marinated the meat for about 12 hours so that the flavours had plenty of time to permeate it.

I made sure to chop everything up small and I used my hands to mix everything very thoroughly before covering the bowl with clingfilm and placing it the fridge. 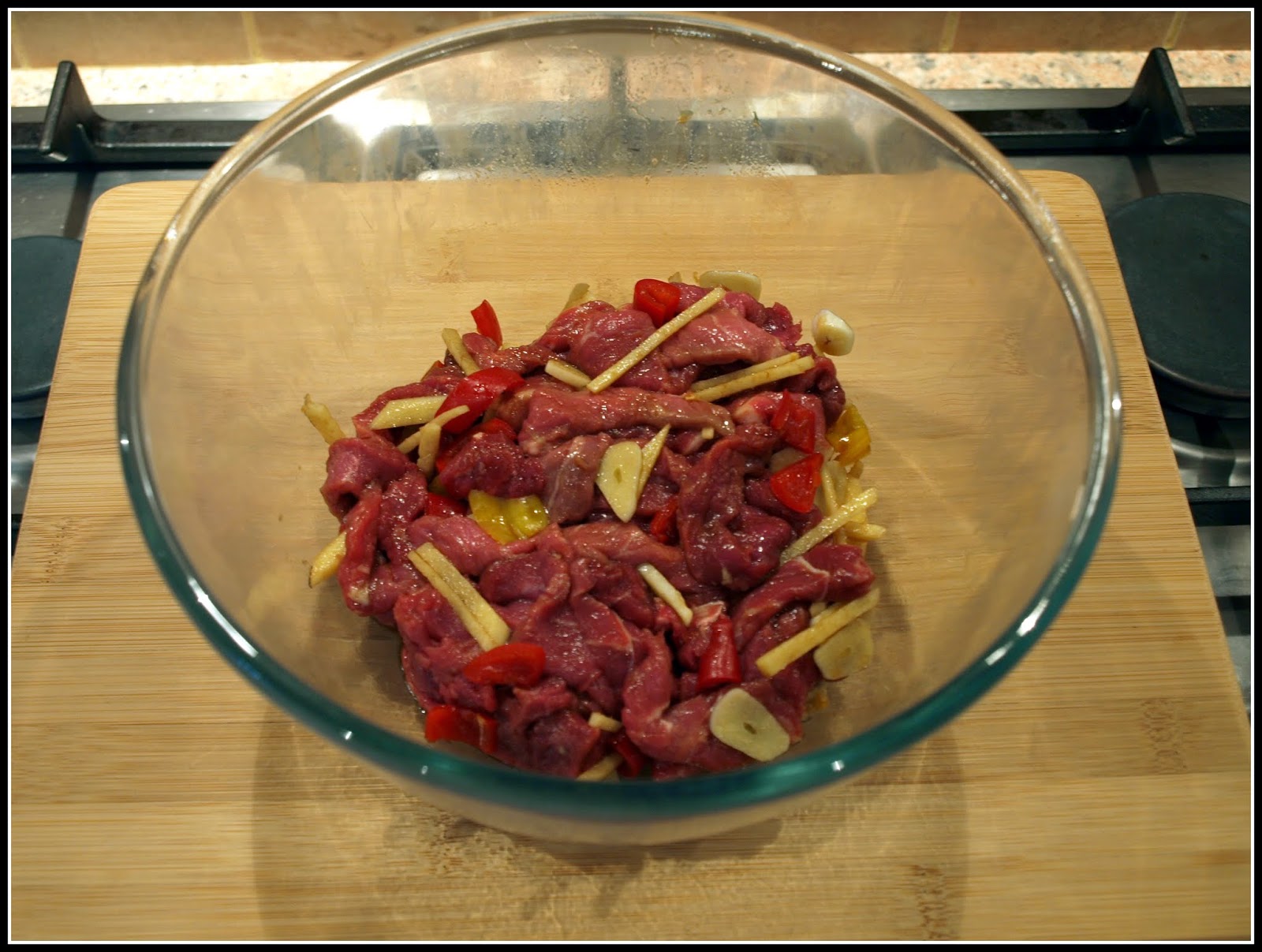 ﻿
I lifted my marinating meat out of the fridge about an hour before cooking-time, to allow it to come up to room temperature. When you use the stir-frying method of cooking you need the wok/pan to be very hot so that things cook quickly, and putting very cold meat into the wok would reduce the temperature too much. At this stage I also fished out the bigger pieces of chilli from the marinade. I didn't fancy the idea of munching-down on a large chunk of Scotch Bonnet!

This meal was just ridiculously easy to cook! I cooked some rice in the electric rice-cooker. You put in the dry rice, add twice as much water as the volume of rice and switch on. Half an hour later you have perfectly-cooked rice. What could be simpler?

Cooking the main dish took less than 10 minutes. I put a tablespoon of vegetable oil into the wok, and heated it up to a very high temperature. I then tossed in some thinly-sliced red onions, and stir-fried them until they began to soften. Then in went the beef, along with a large (mild) red chilli (de-seeded and cut into large pieces) and a bunch of Spring Onions (cut into 3-inch lengths), and stir-fried for about 3 or 4 minutes. 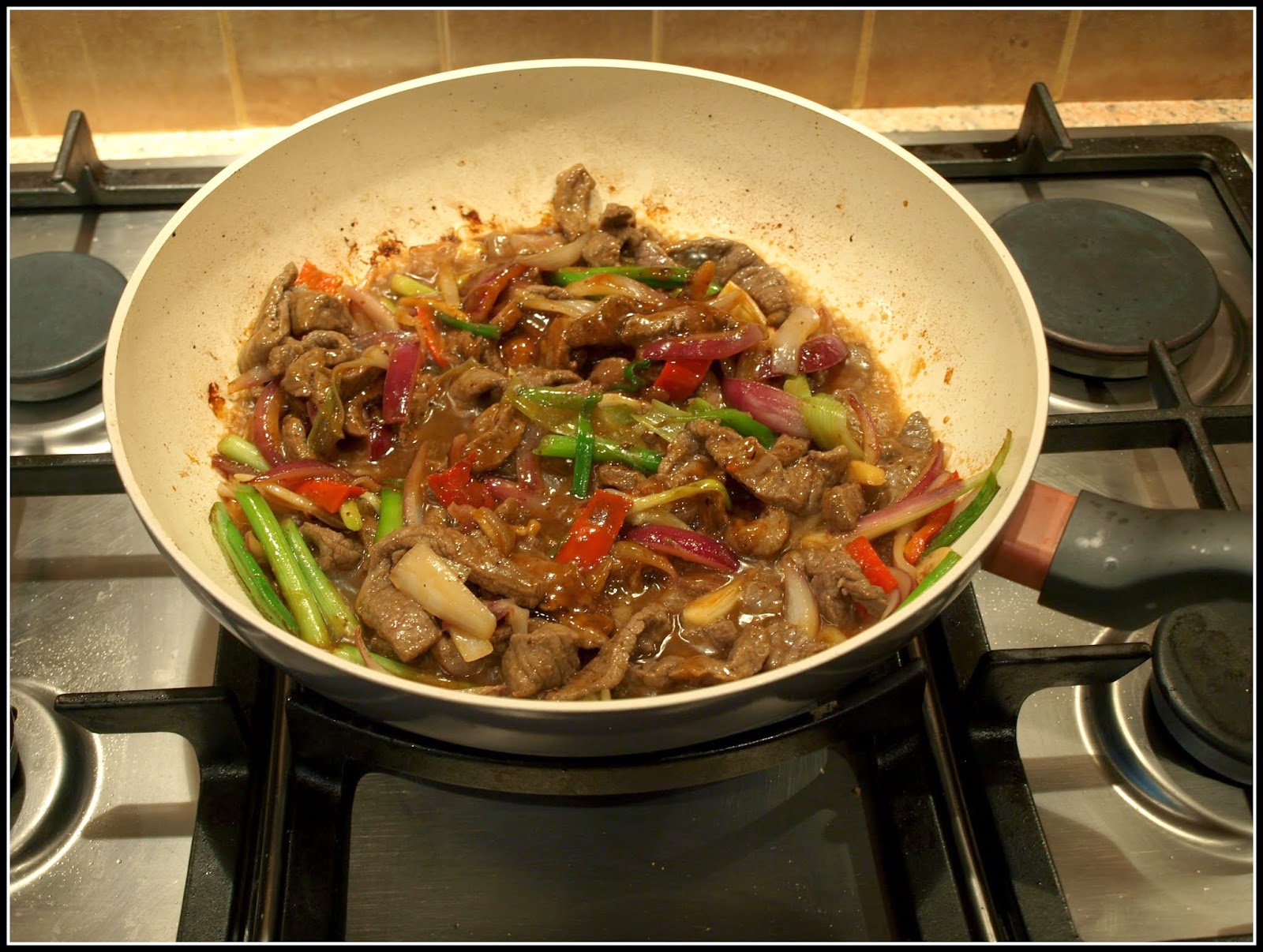 At this stage the dish didn't look particularly colourful, but wait till you see it after the tomatoes were added! 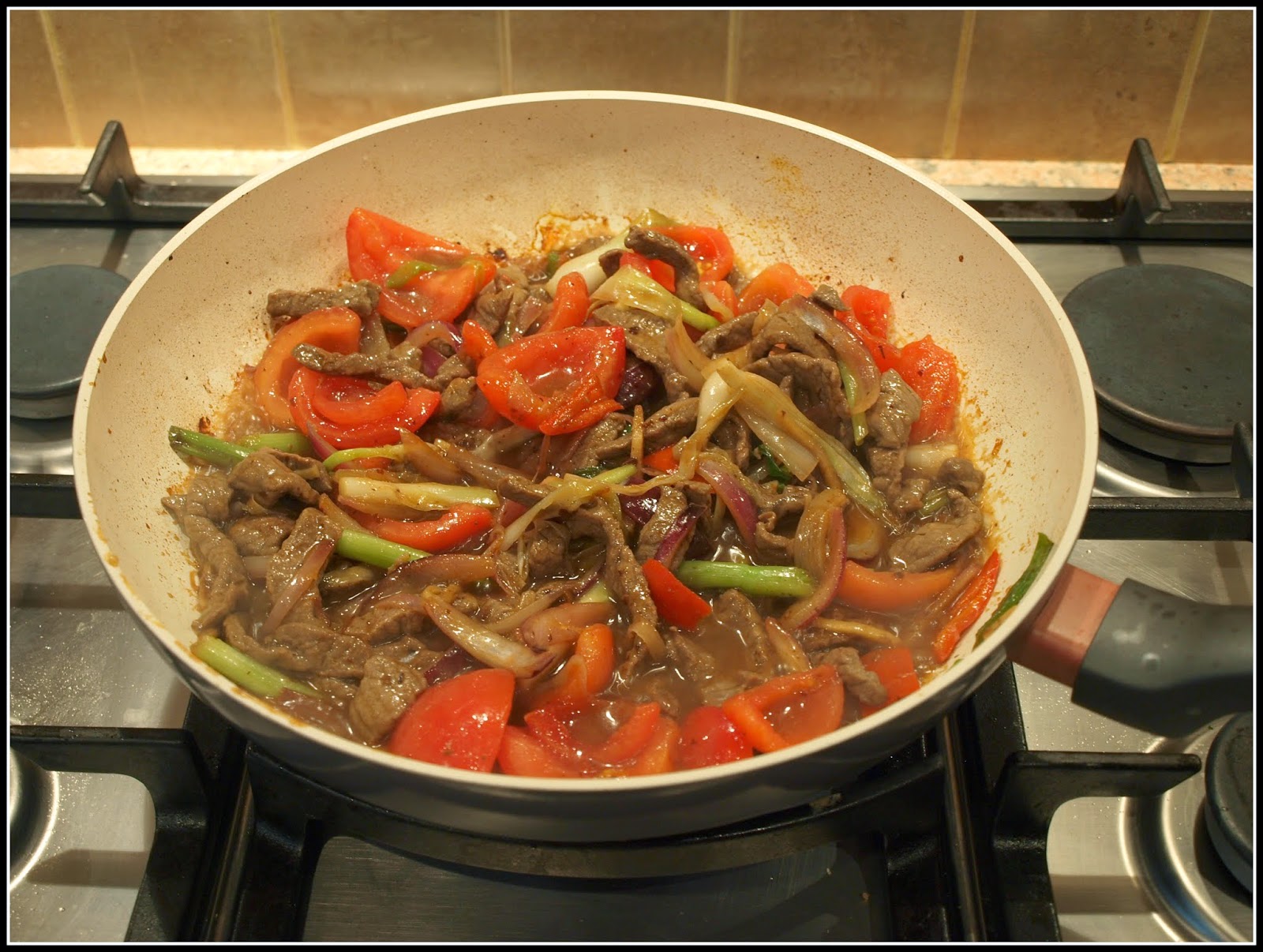 I had previously skinned the tomatoes, and removed the seeds. Incidentally, in case you don't already know this, skinning tomatoes is really easy. Cut a cross in the stalk end of the tomato, at least as deep as the skin; put the tomatoes in a deep bowl and pour boiling water over them. After 30 seconds, remove the tomatoes with a slotted spoon. You will find that the skins now peel off very easily. They may even slip off without the need to use a knife.

The final step was to add the shop-bought Black Bean sauce and cook the dish for a further minute or so, stirring all the while, until the sauce had heated through:


To serve, simply put some of the cooked rice onto a plate or bowl, and spoon the Beef over the top... 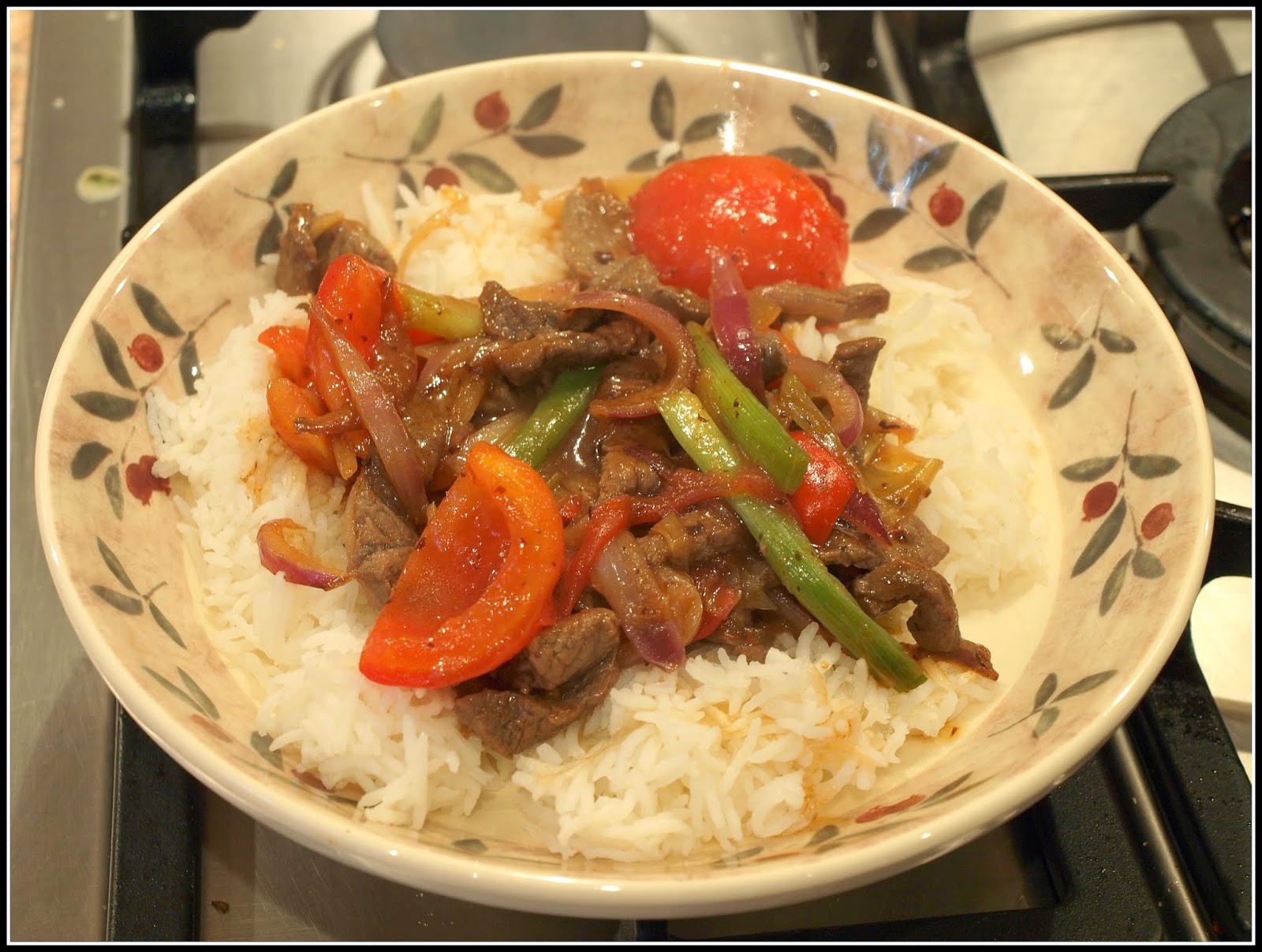 ﻿
I have to say that this meal was not the sort of thing I usually make. I tend to go for things that require longer, slower cooking, but my repertoire is expanding rapidly. I think the key to success with a dish like this is careful preparation of the ingredients in advance, and the courage to cook at a very high temperature. In respect of the latter I was considerably aided by the fab new Delimano ceramic wok that Jane recently won in a competition. It heats up very rapidly and maintains a very even temperature. It even has a thing to tell you when it is hot enough: there is a ring at the pan end of the handle, which glows red when the correct temperature is reached. You can see it in a couple of the photos above.

For all the chilli-haters out there - of course you can omit the chilli. Just add something that you like instead. Sweet Peppers / Capsicums would work just as well.
Posted by Mark Willis at 12:00