Shutting up shop for Winter

I haven't posted anything here for ages, so you probably guessed this: I'm shutting up my blog for the Winter.

My garden looks bedraggled and messy at present, and there is very little for me to write about. Who wants to see photos of my last few tomatoes, still holding out against the encroaching Blight? 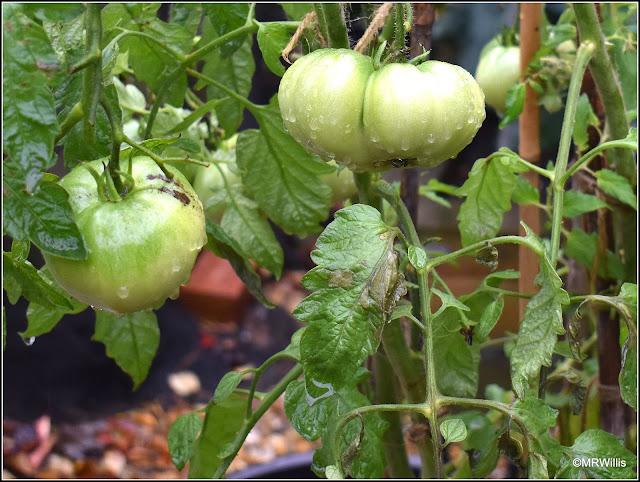 My remaining cucumber plants are still producing a few fruits, but they are not very appealing! 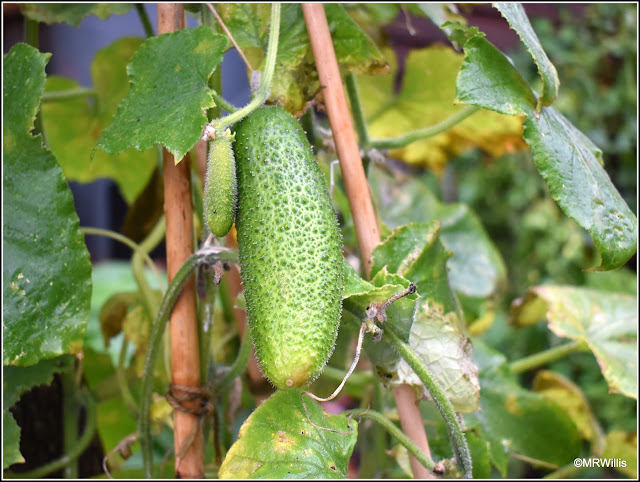 We've already made a few jars of Sweet Chilli Sauce, so even the incentive to pick more of the chilli crop is much reduced now. 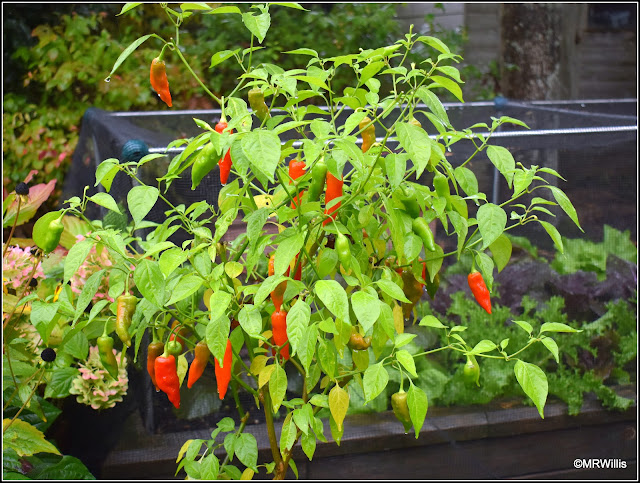 Fortunately, just as the gardening season tails off, the best time of year for my other hobby - fungi-hunting - begins. This is what I'll be doing for the next few months. Thanks for following, and see you next Spring!

About this time every year I do my best to sing the praises of a vegetable that is unfortunately very under-appreciated in the UK, even though it is much more popular in most of the rest of Europe (and maybe further afield too?) - it's the chicory, and more specifically the variant known as radicchio. 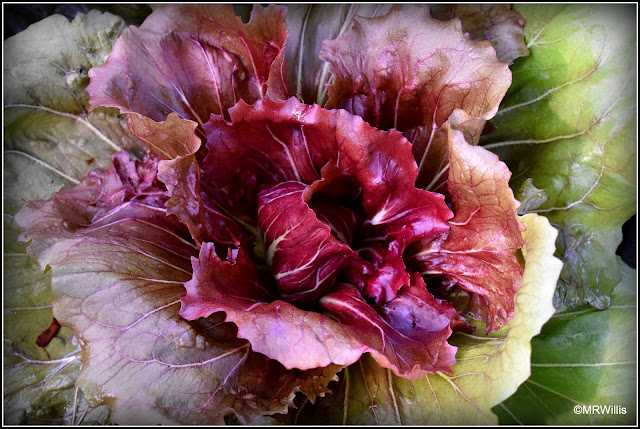 Although you can usually find this vegetable in the shops these days, as far as I'm aware few British amateur gardeners grow it, which is a shame in my opinion because I reckon that even if I didn't like the taste of it I would probably want to grow this vegetable in my garden just because of its spectacular good looks. 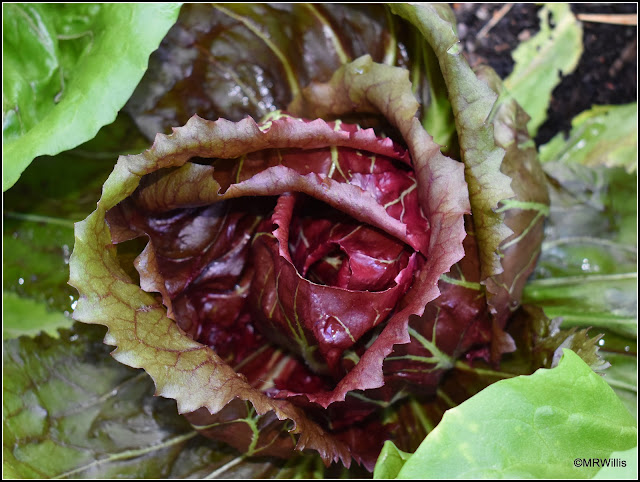 Radicchio is often grown as an Autumn-maturing crop, because it tolerates cool temperatures. In fact some varieties (e.g. Grumolo rosso) will survive several degrees of frost. Sown in Mid-Summer and planted out in say early August, it can be harvested in late Autumn. It is grown very much like lettuce, and forms a tight inner heart like Iceberg lettuce. The outer leaves generally remain green and tough, but their purpose is just to protect the more tender heart, and they get discarded at harvest. The heart is usually quite firm - crisp vibrantly-coloured red leaves with crunchy white ribs. 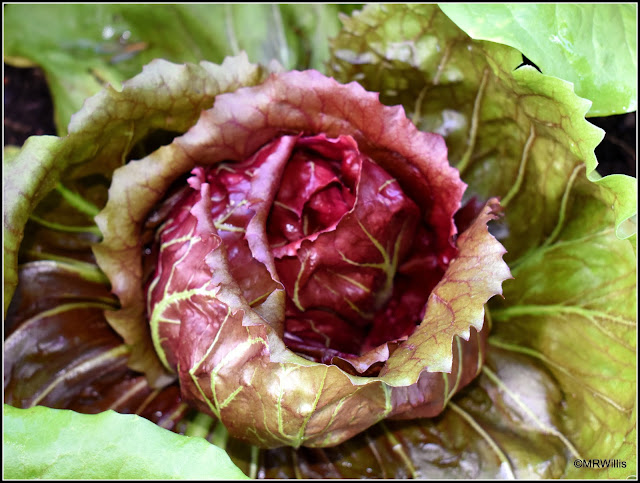 My radicchio are not ready for harvest yet. Many of the leaves are still quite green - they get redder as the temperatures fall. 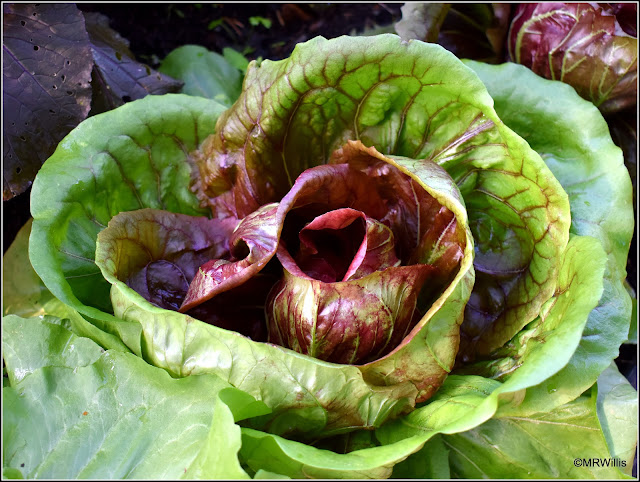 Actually, before we assume that all chicories are red radicchios, let's acknowledge the existence of varieties that remain green, probably with yellowish inside leaves, like this one: 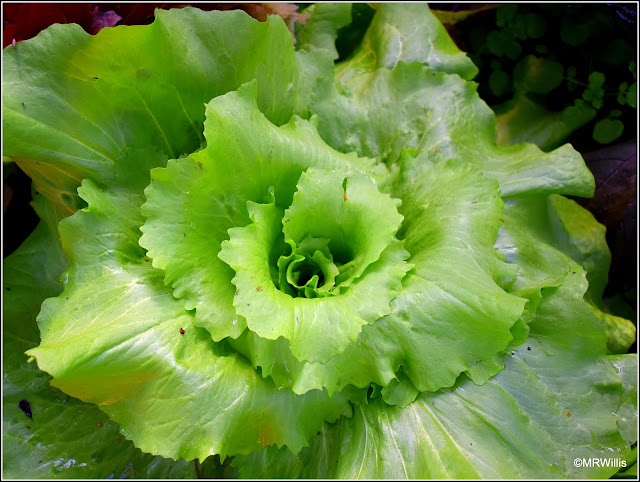 This year my chicories are a "mixed bag", grown from seeds out of several packs left over from previous years. I seem to have ended up with about 60% red ones and 40% green ones. 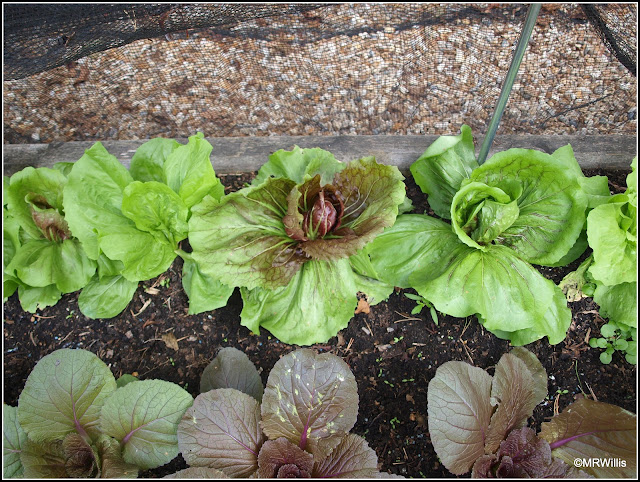 Some of them will be speckly ones, possibly the variety "Variegato di Castelfranco". I know there were some seeds of that one in the mix. 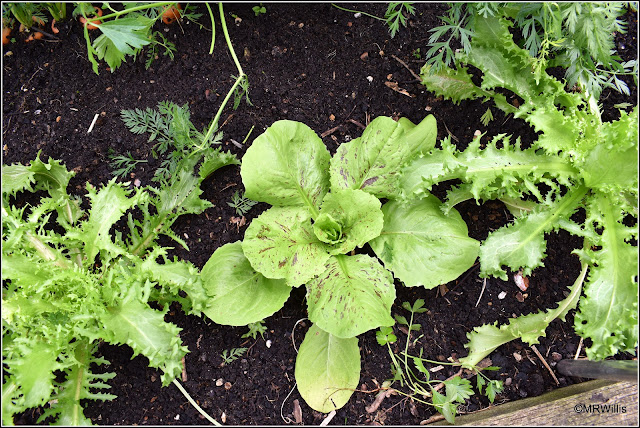 You can see that the chicory is interplanted with some curly endives, another of my favourite late-season salad vegetables. Last year I was late sowing my endives and I had to over-winter them under cloches (they did very well eventually). This year I remembered to sow at the right time - the first week of July - and they are much further forward than they were this time last year, although clearly not ready to harvest just yet. 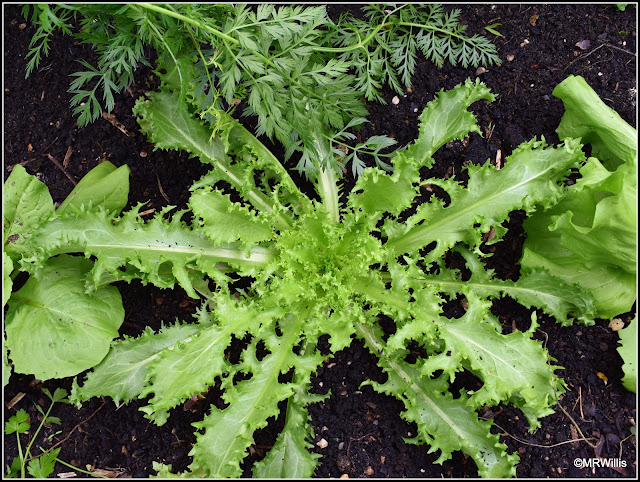 If you haven't tried these vegetables - either eating them or growing them - I urge you to give them a try. Both endives and radicchio are sometimes accused of being unduly bitter, but I assure you this is not the case. Modern varieties are a lot sweeter than you would think, catering for modern tastes. I suppose I shouldn't say this, but I think these days many people in the UK don't like strong tastes, and most frequently prefer what I'd call bland flavours.
Posted by Mark Willis at 12:30 5 comments: