This year, as usual, I have several different types of chilli on the go. I grow them not so much for their culinary potential (we eat a modest amount of chillis), but simply for the joy of growing them - and photographing them!

Over the Bank Holiday weekend just past, I had the chilli plants out in the fresh air and sunshine for several hours each day, acclimatising them to living outdoors. Up to this point I had been keeping them in the plastic mini-greenhouses during the day and bringing them indoors or into the garage at night. Early May has brought some very cold nights, and chillis don't like such things! 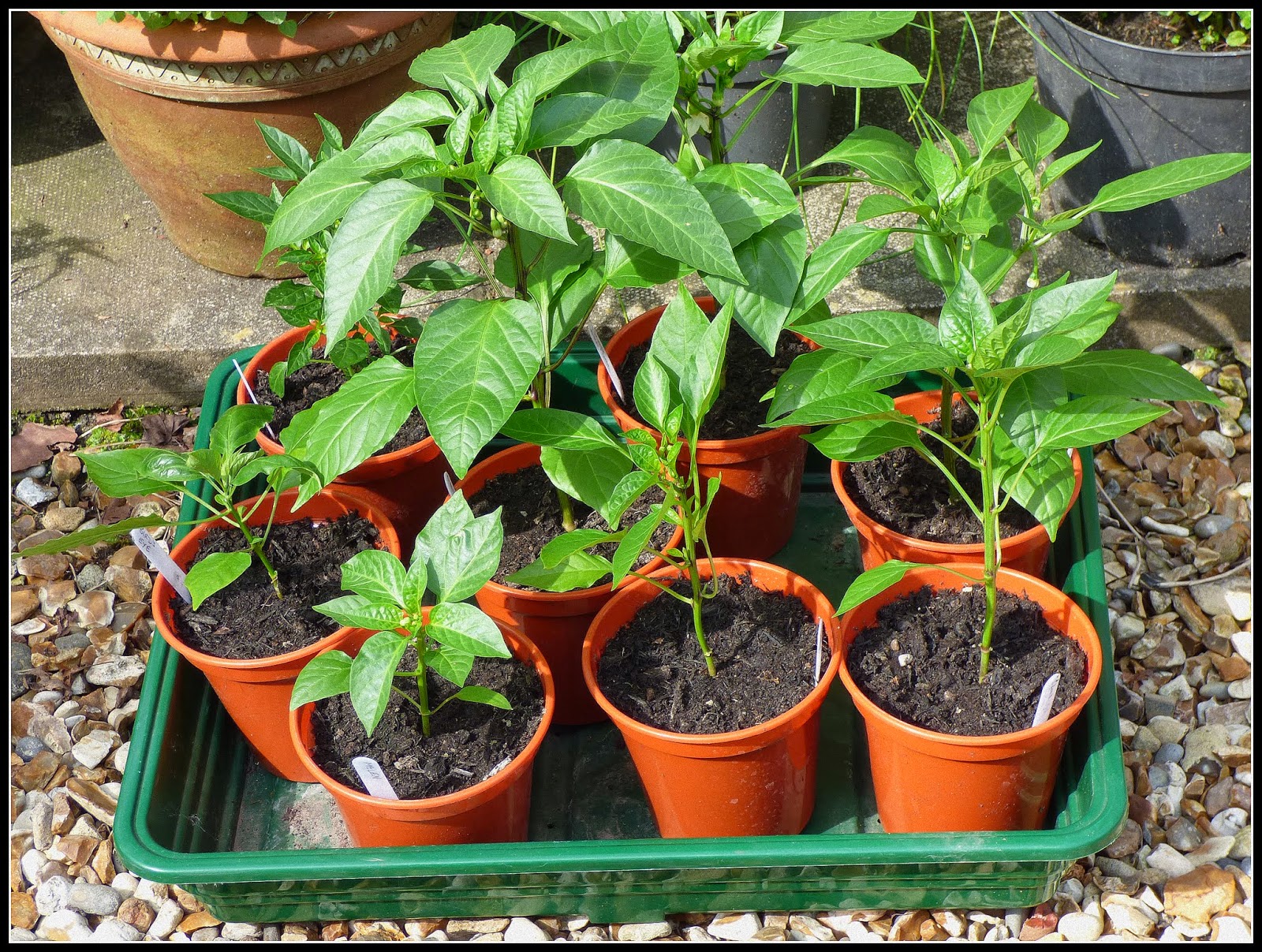 As you can see, the chilli plants are all different in terms of size. Part of the appeal of growing chillis is that there are so many types available, some growing very big and some remaining tiny. I normally prefer plants that are not going to be huge - especially not tall because I find those to be very vulnerable to wind damage. An ideal chilli is this "Red Jalapeno" grown from seed sent to me by a friend in the USA. 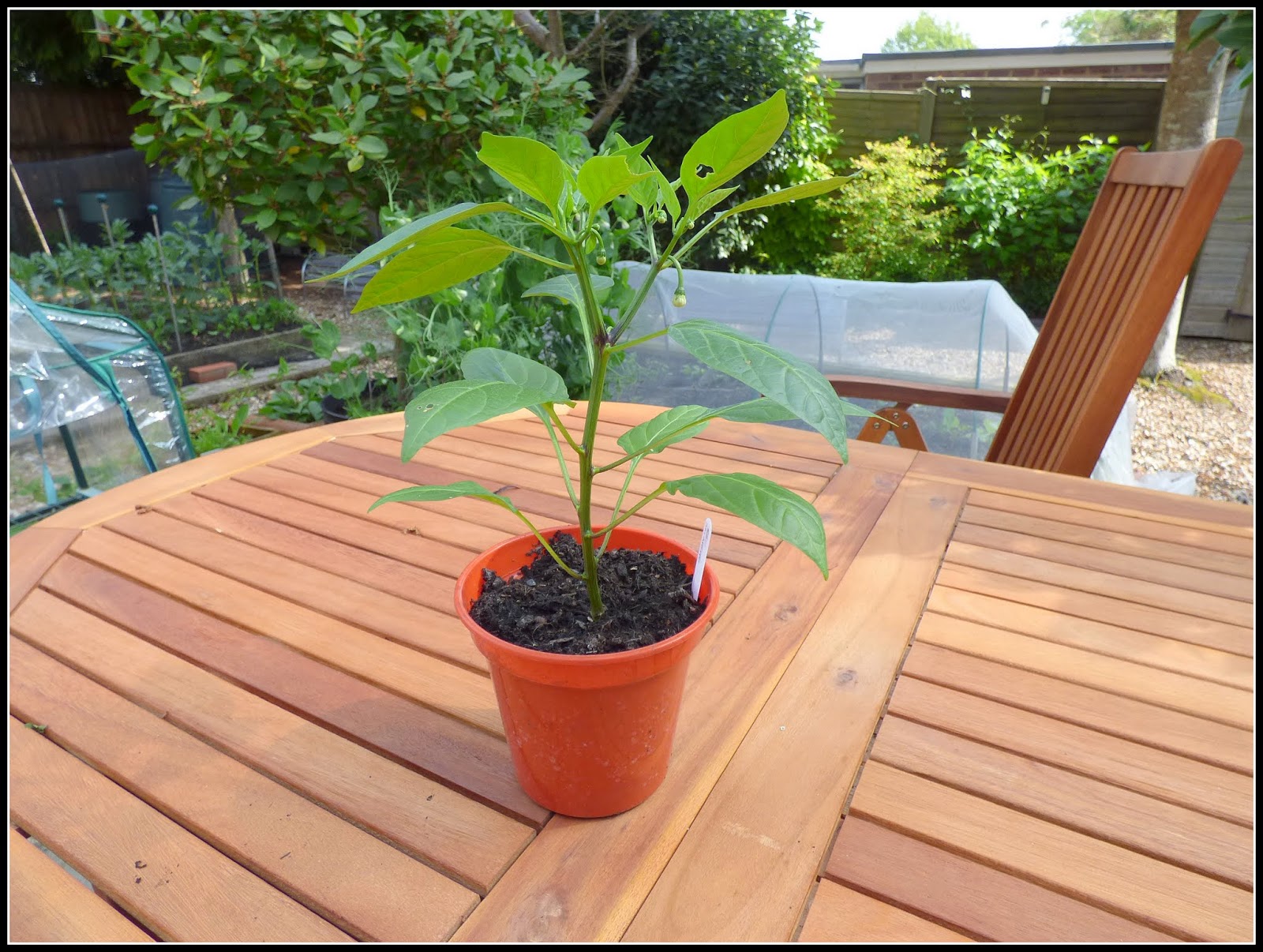 This type of chilli plant will naturally fork into separate branches when it reaches about 18" tall. If you want it to be even more compact, you can pinch-out the growing tip at an earlier stage. 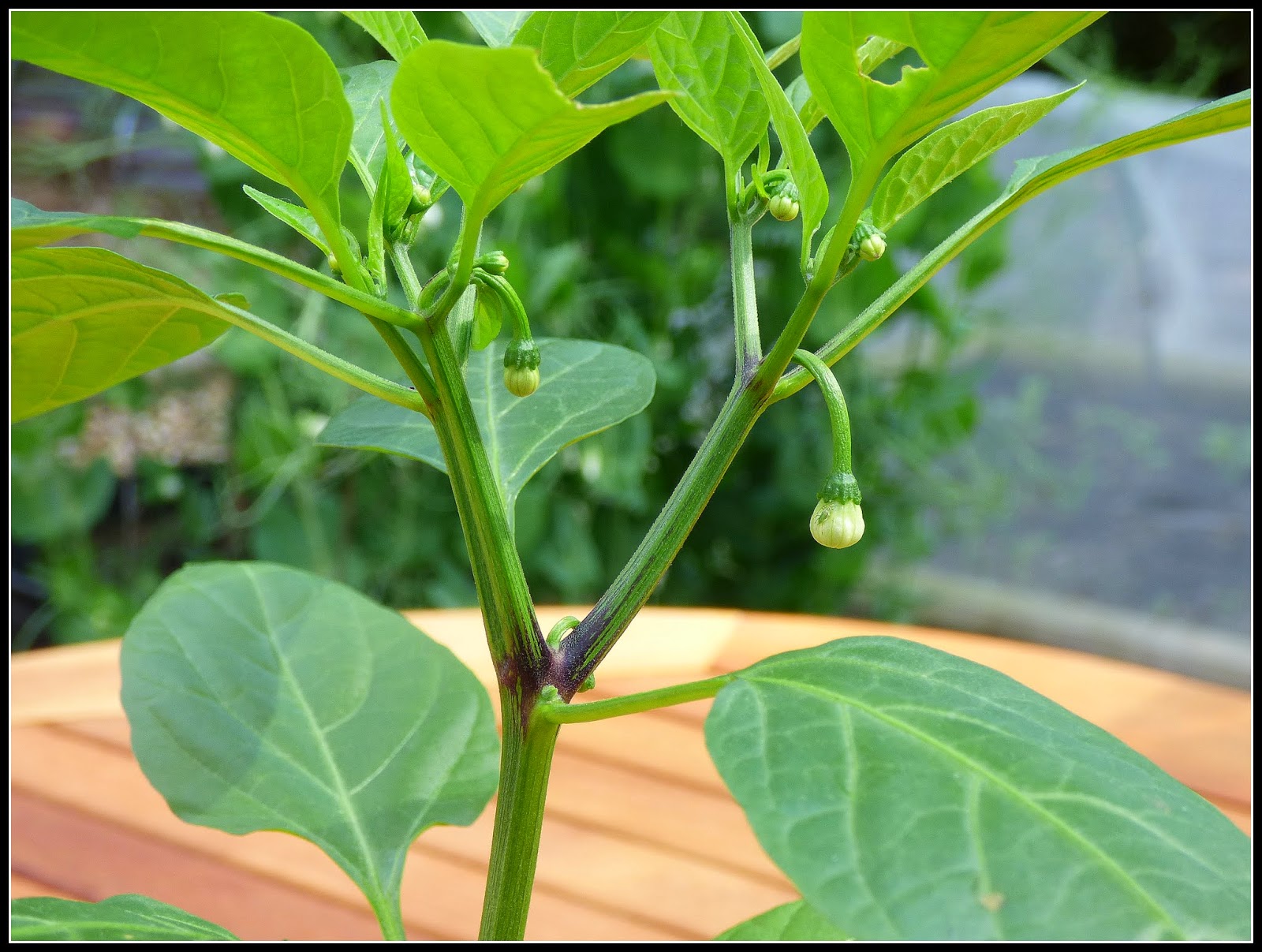 ﻿
The chilli flowers (and hence fruits) grow from where the branches divide, so having lots of separate forks is a good thing. This next one has got it down to a fine art: 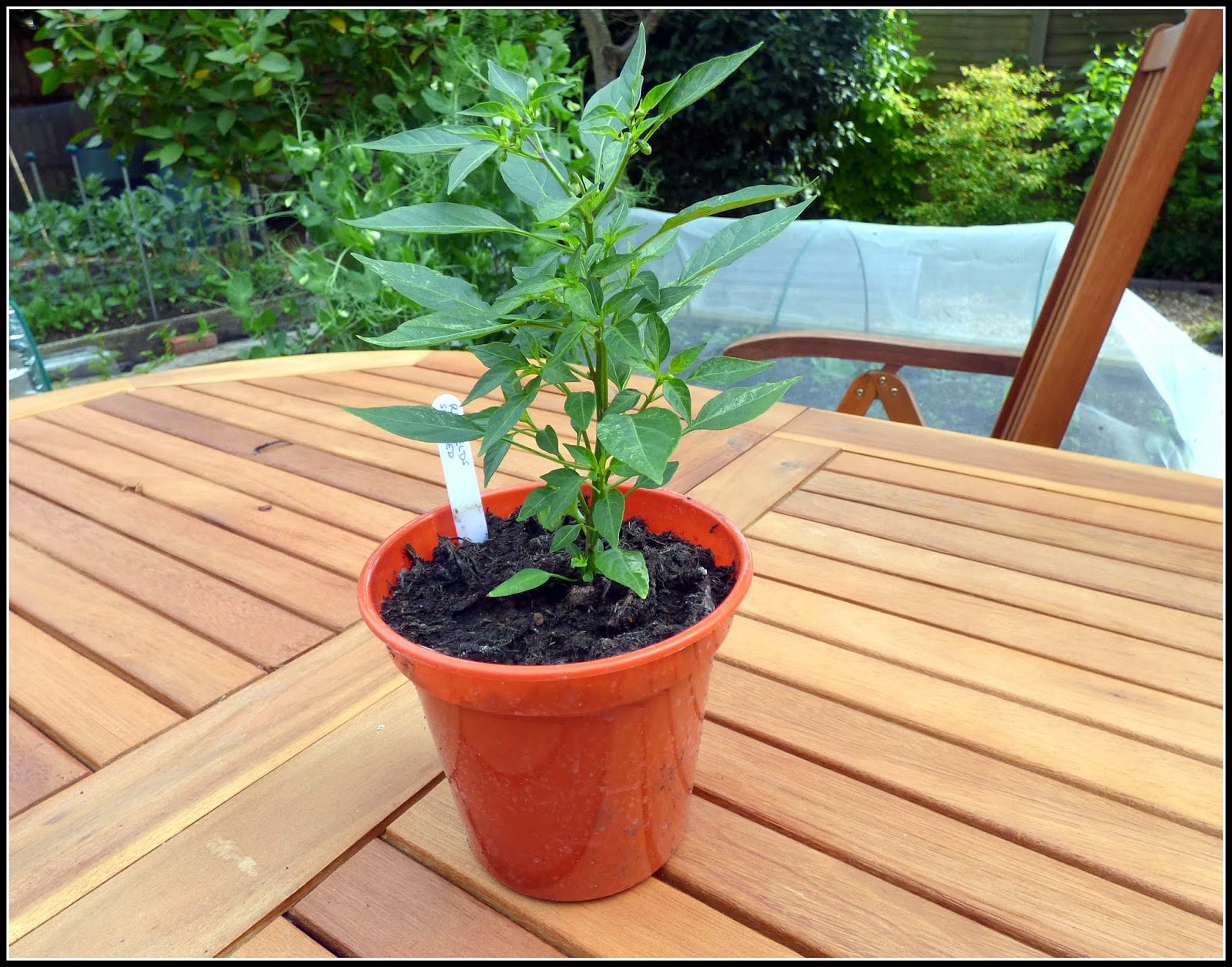 It's a tiny plant, but it already has loads of flower buds. I don't know the official name for this one, so I have nicknamed it after the Garden Centre where I got it and the type of fruit - "Redfields Small Red". 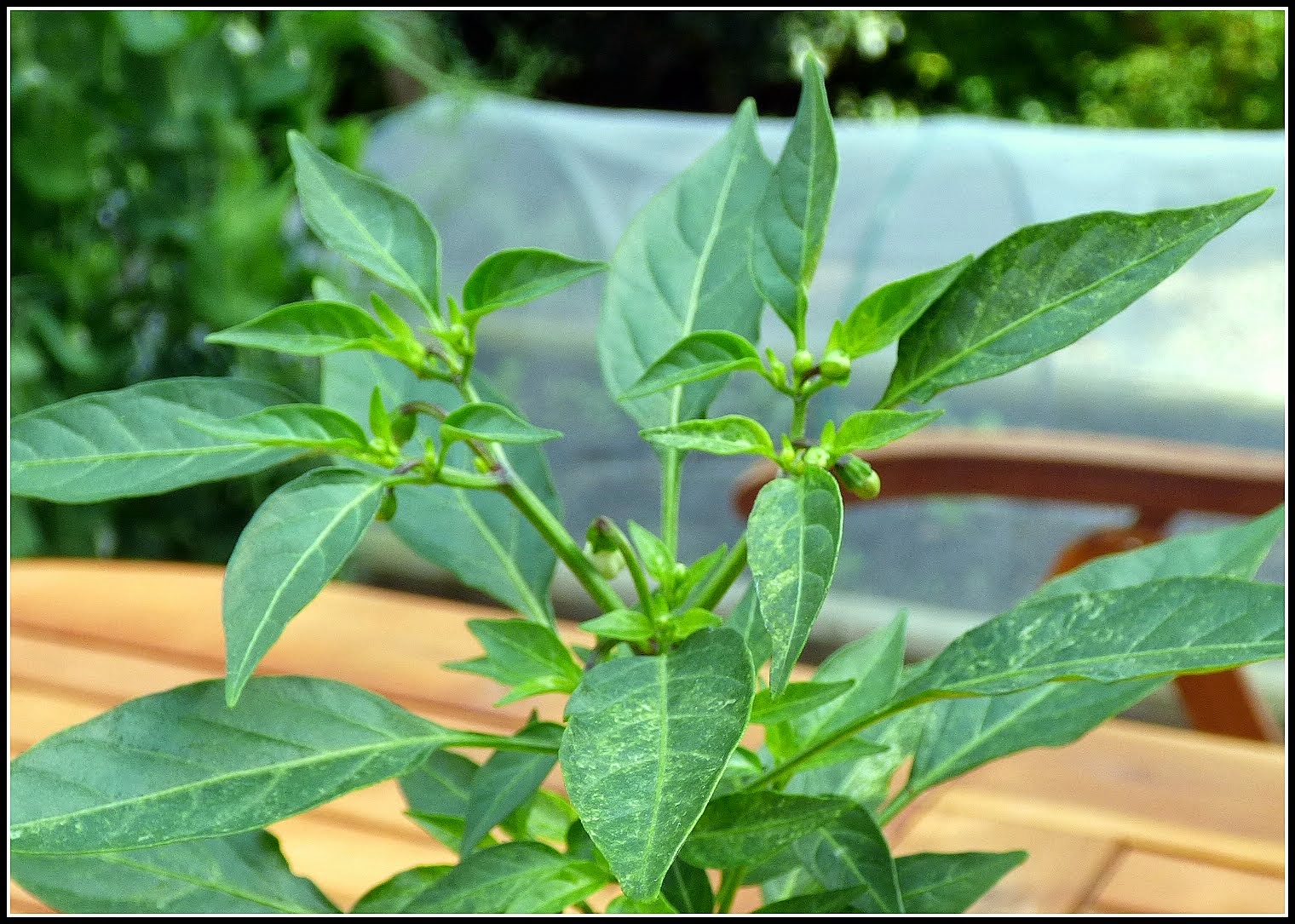 One of the strongest-looking plants I have is not a chilli at all, it is a pepper. By this I mean a variety of Capsicum that produces fruits with little or no heat. Although they are not sweet in the normal sense they are sometimes called "Sweet Peppers" or simply "Bell Peppers" because of their shape. This one of mine is an unknown variety grown from seeds I collected in Turkey. It produces small very pale green fruits, ripening eventually to red. 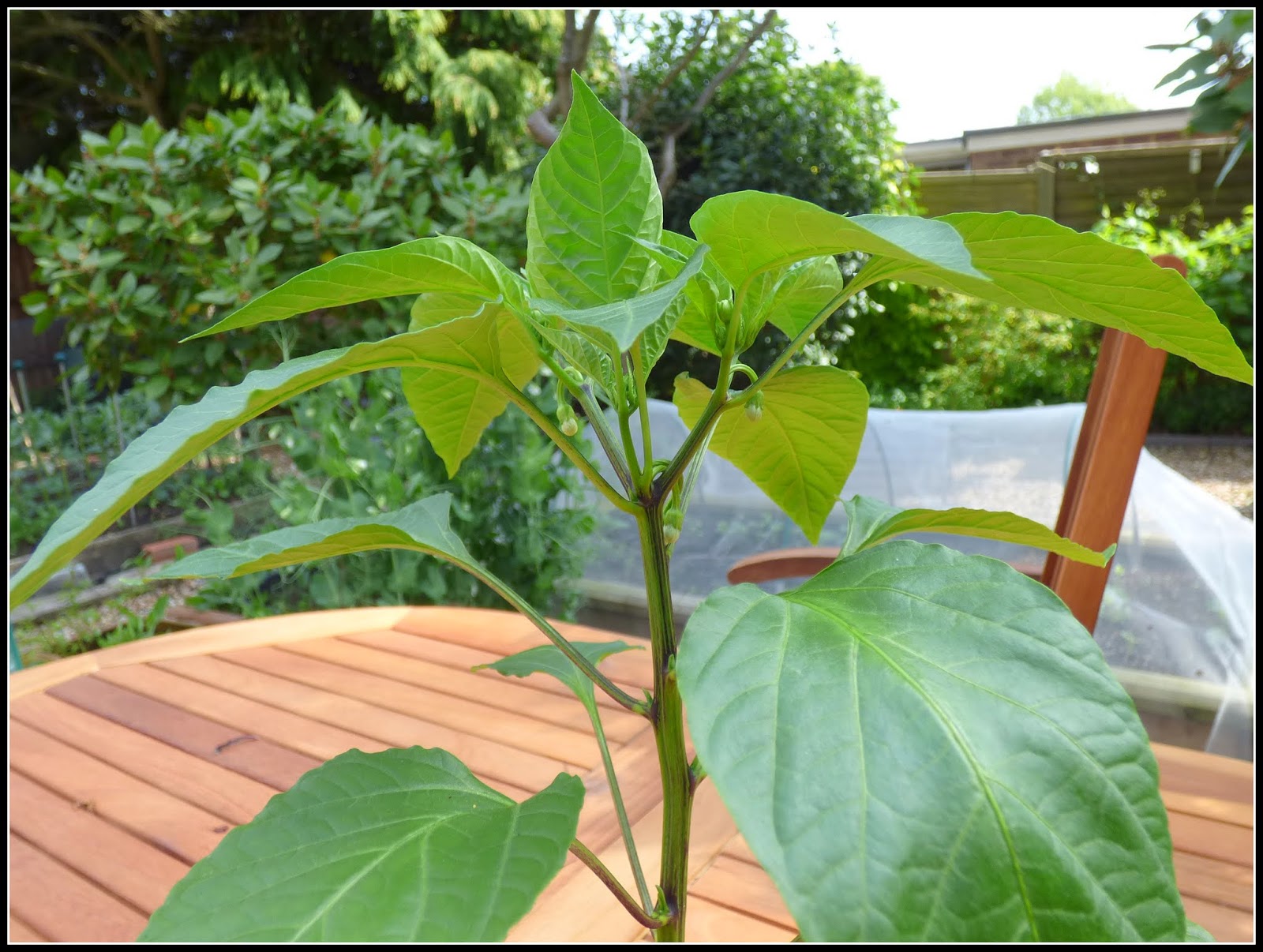 It looks as it will have plenty of fruit, and they won't be too long in coming either. 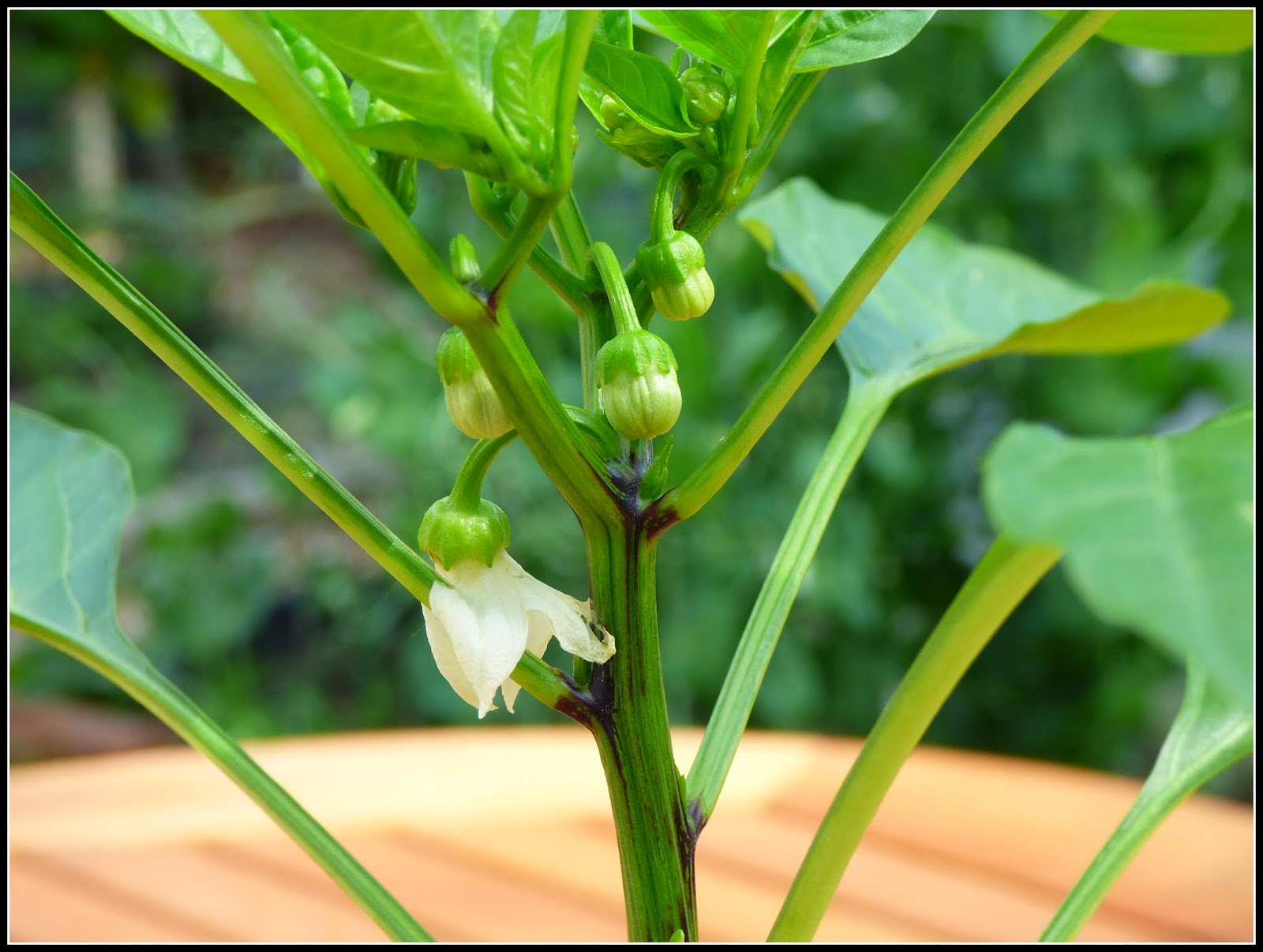 ﻿
Another variety showing great promise is one called "Ohnivec", grown from seed sent to me by a friend in the Czech Republic. So far both specimens I have are looking exceptionally healthy and sturdy. 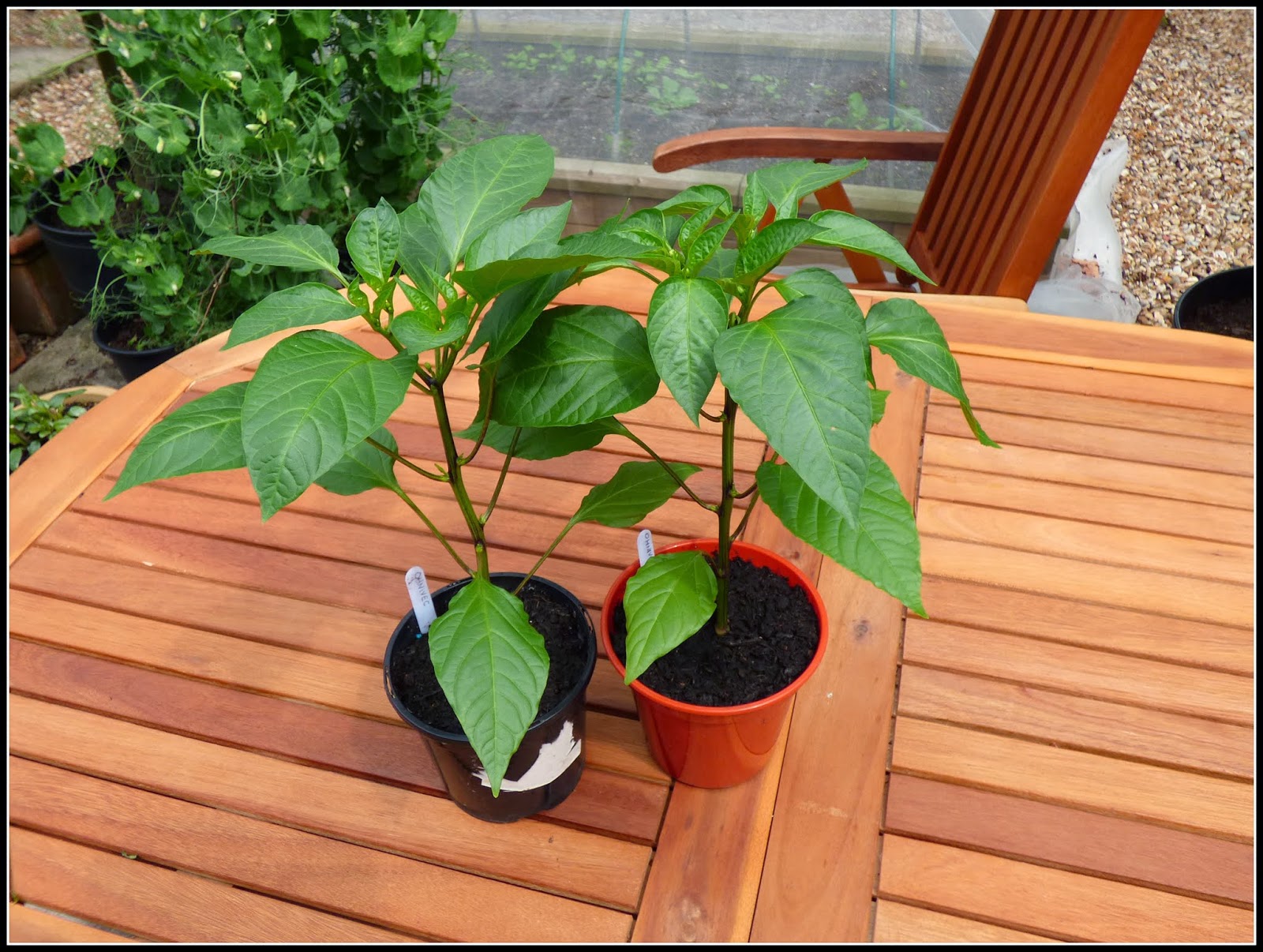 Here's a close-up of one of them: 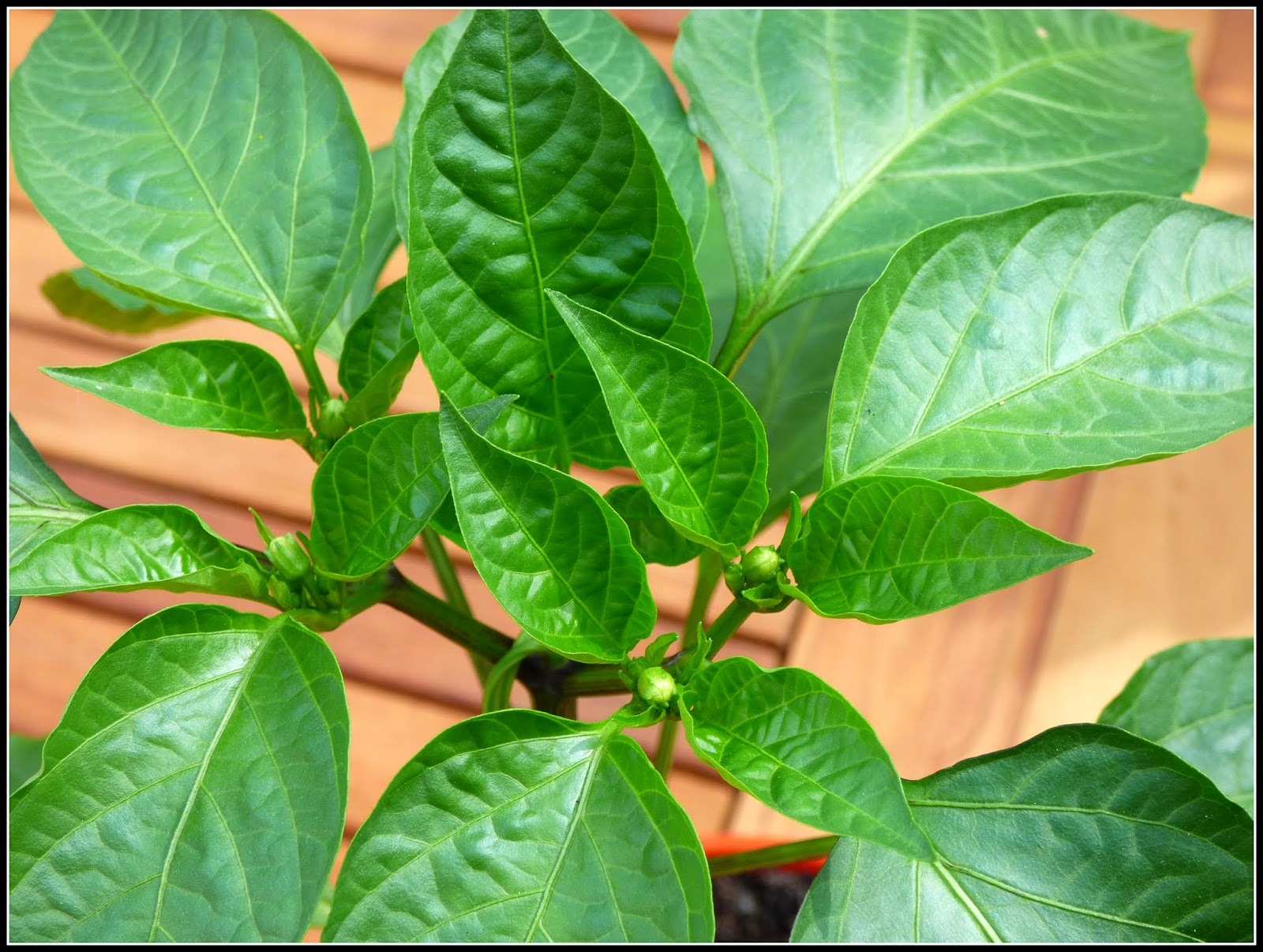 This pair of siblings is definitely NOT uniform. They are both "Ring of Fire". 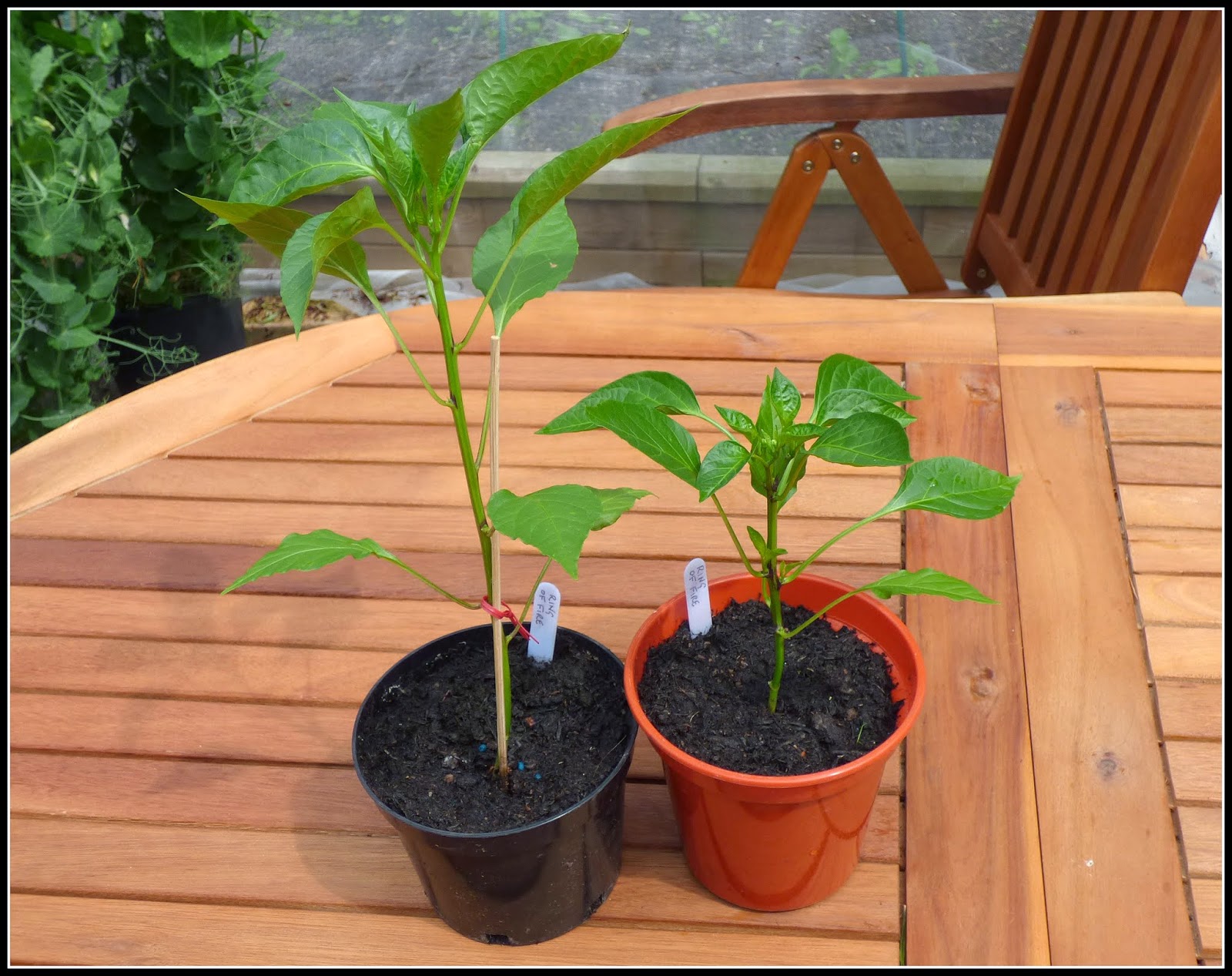 Likewise, these three "Bird's Eye" chillis were all sowed at the same time, but germinated several days apart and have grown at different rates despite being treated in exactly the same way: 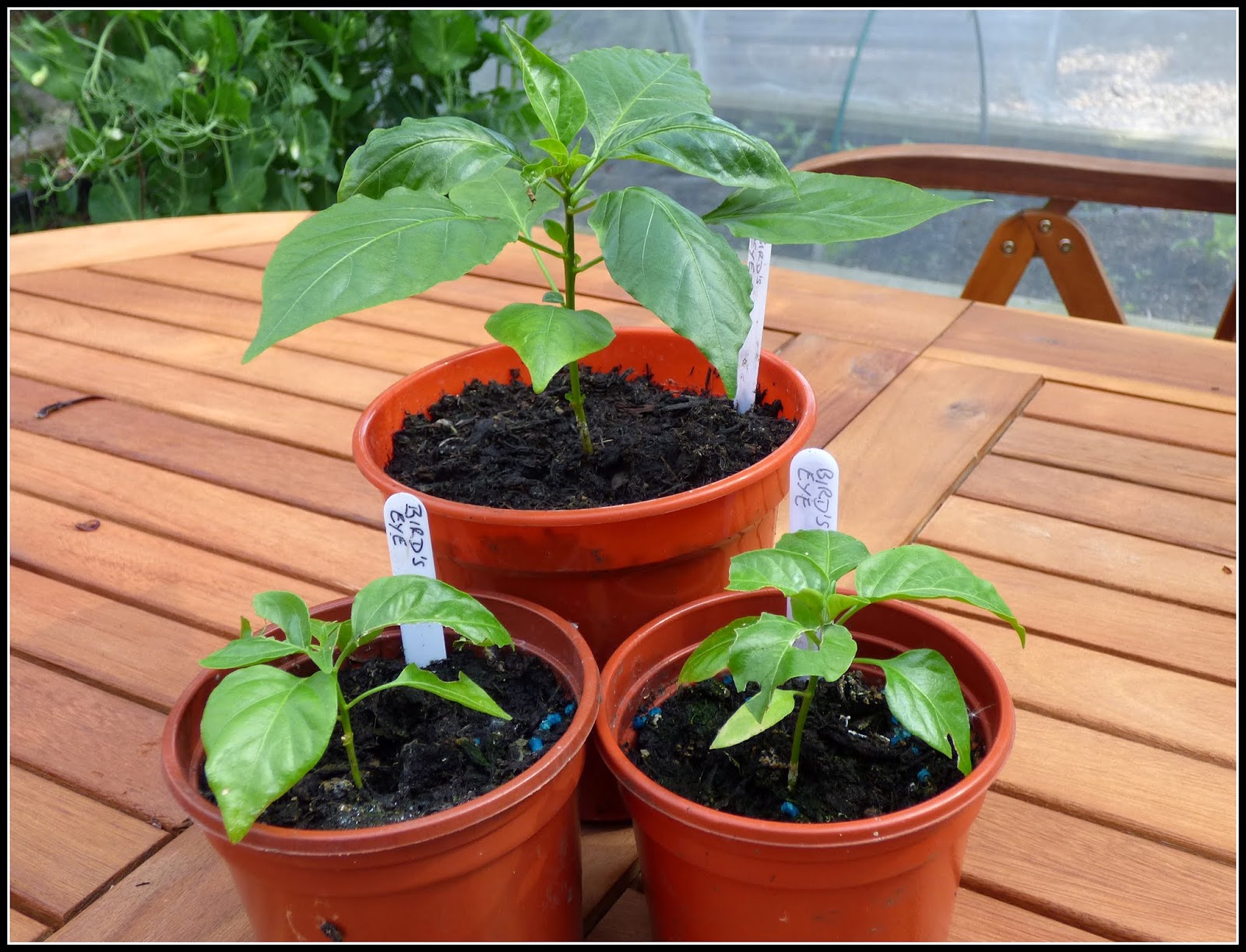 This next one is "Piment d'Espelette", a very mild chilli or perhaps a stronger-than-usual pepper, grown from seeds kindly provided by a friend in Belgium. 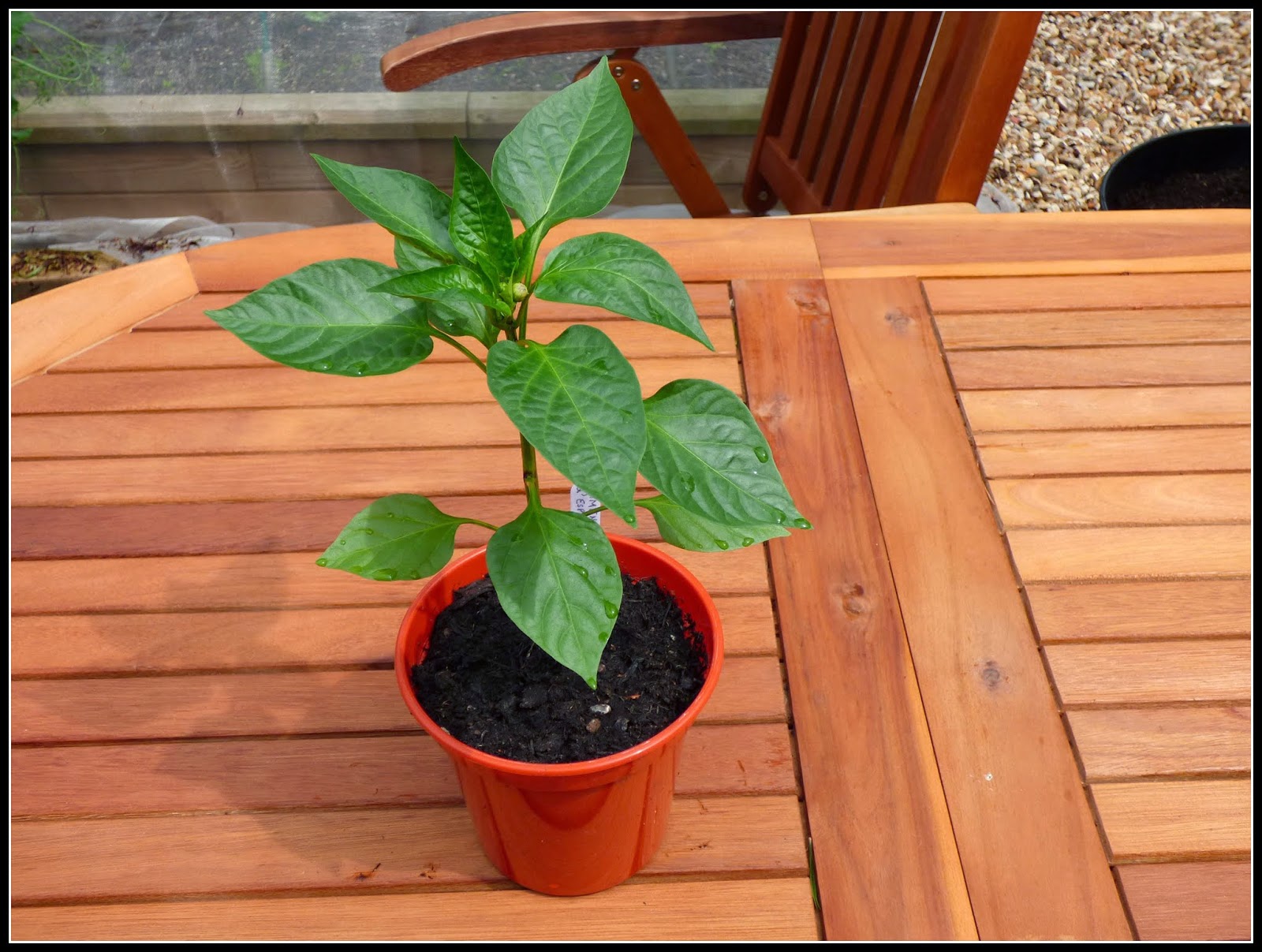 This diminutive "King of The North" pepper is much smaller than I had expected it to be by this time. It is supposed to be a variety well suited to growing in colder climes, so I had thought it would be romping away by now. Maybe it's just a slow starter... 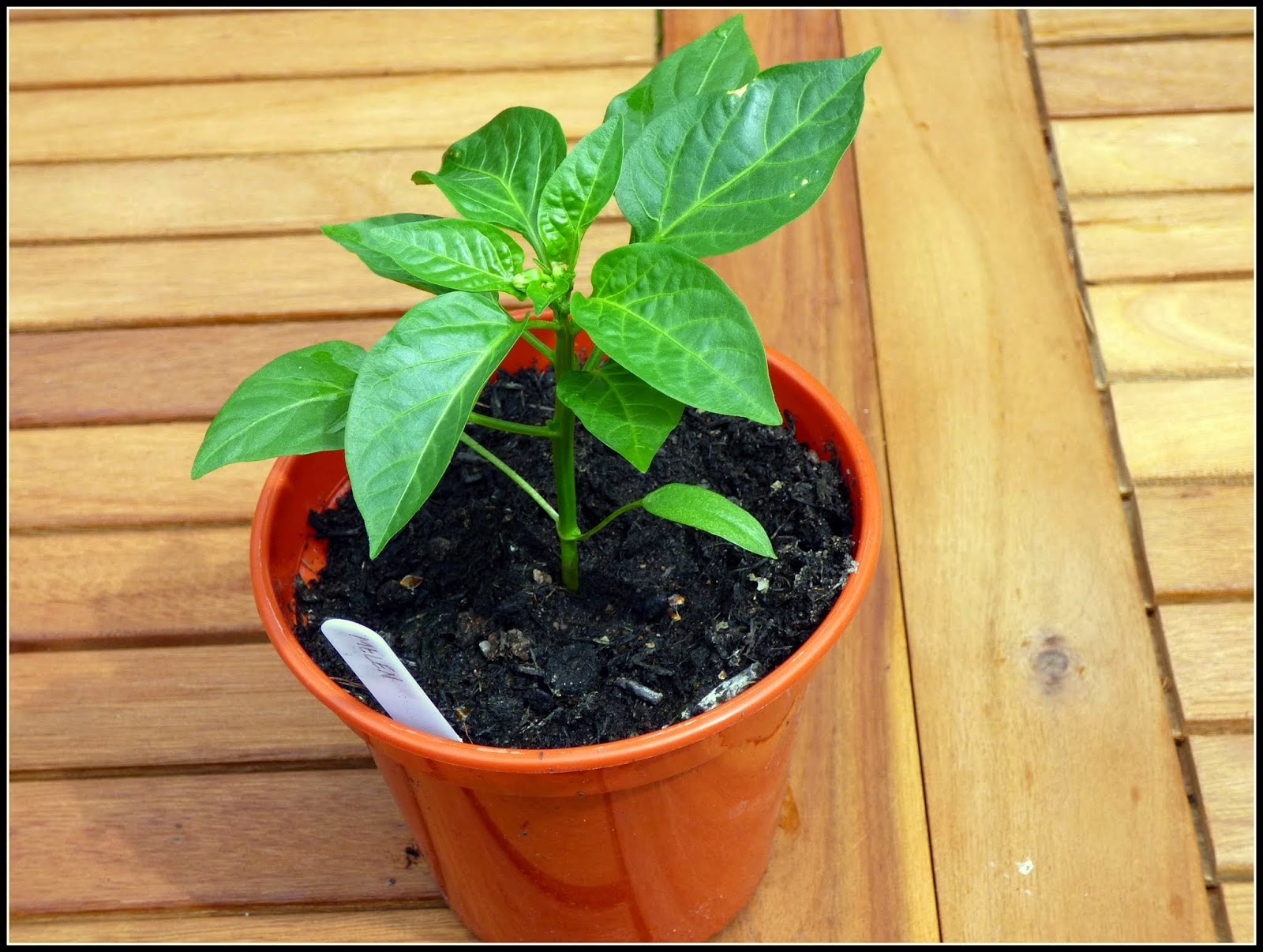 Meanwhile, indoors the over-Wintered "Nosferatu" plants (I have two) are producing a few fruit. Loads of flowers, but not many fruit just yet. This is normal for many chillis. The first flush of flowers often falls without setting any fruit, but later on they have another go, which is generally much more successful. The deep purple, almost black, fruits are certainly dramatic! 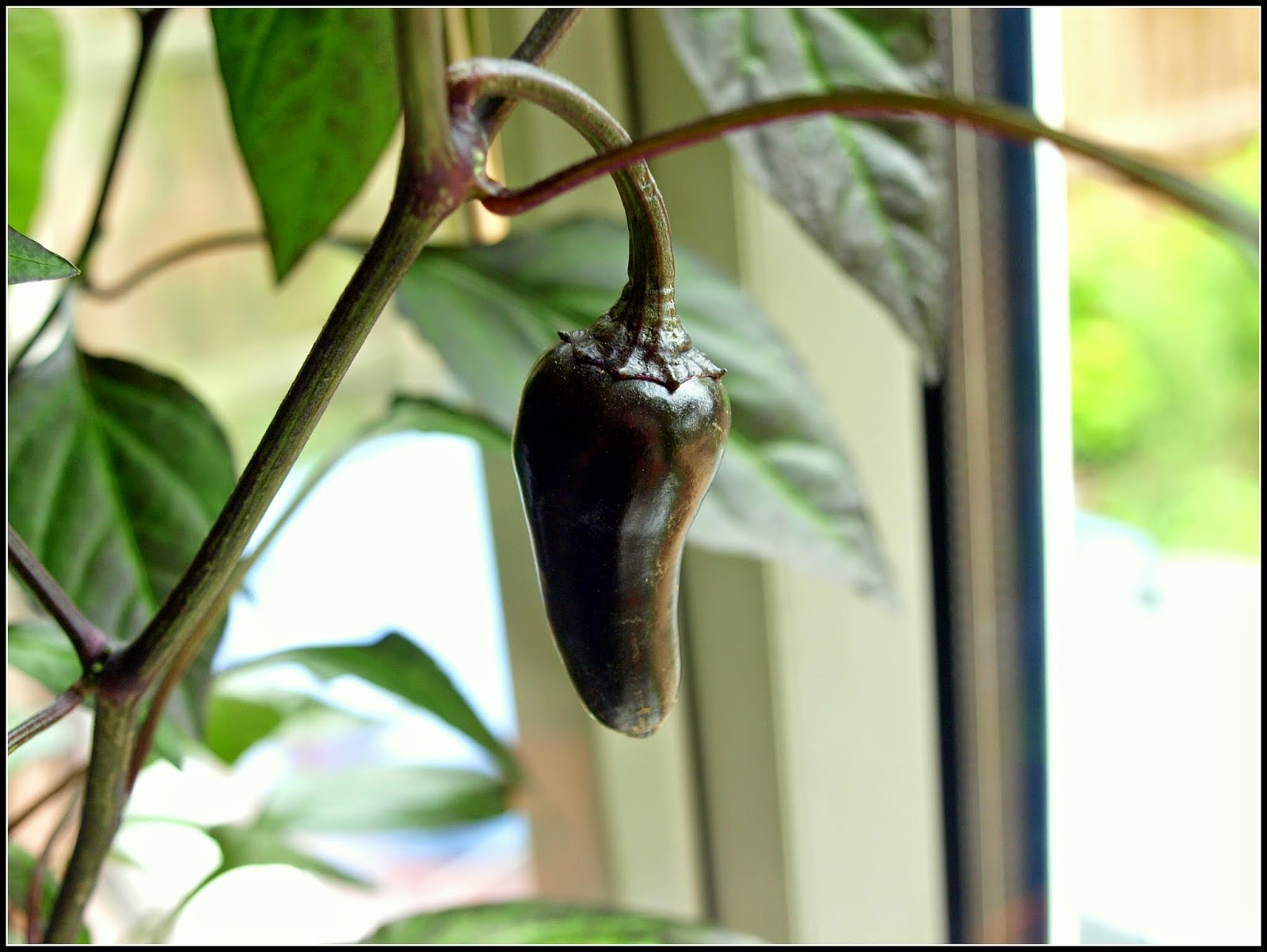 ﻿
As well as the chillis described above, I have a second "wave" of smaller ones coming along. They are a couple of weeks behind the first lot, so are spending most of their time indoors or in the little greenhouses.
Here we see in the terracotta-coloured pots (L to R) "Explosive Embers", "Aji Limon" and "Nosferatu", while in the little blue-and-white Elmlea pot is "Turkey Small Red"! 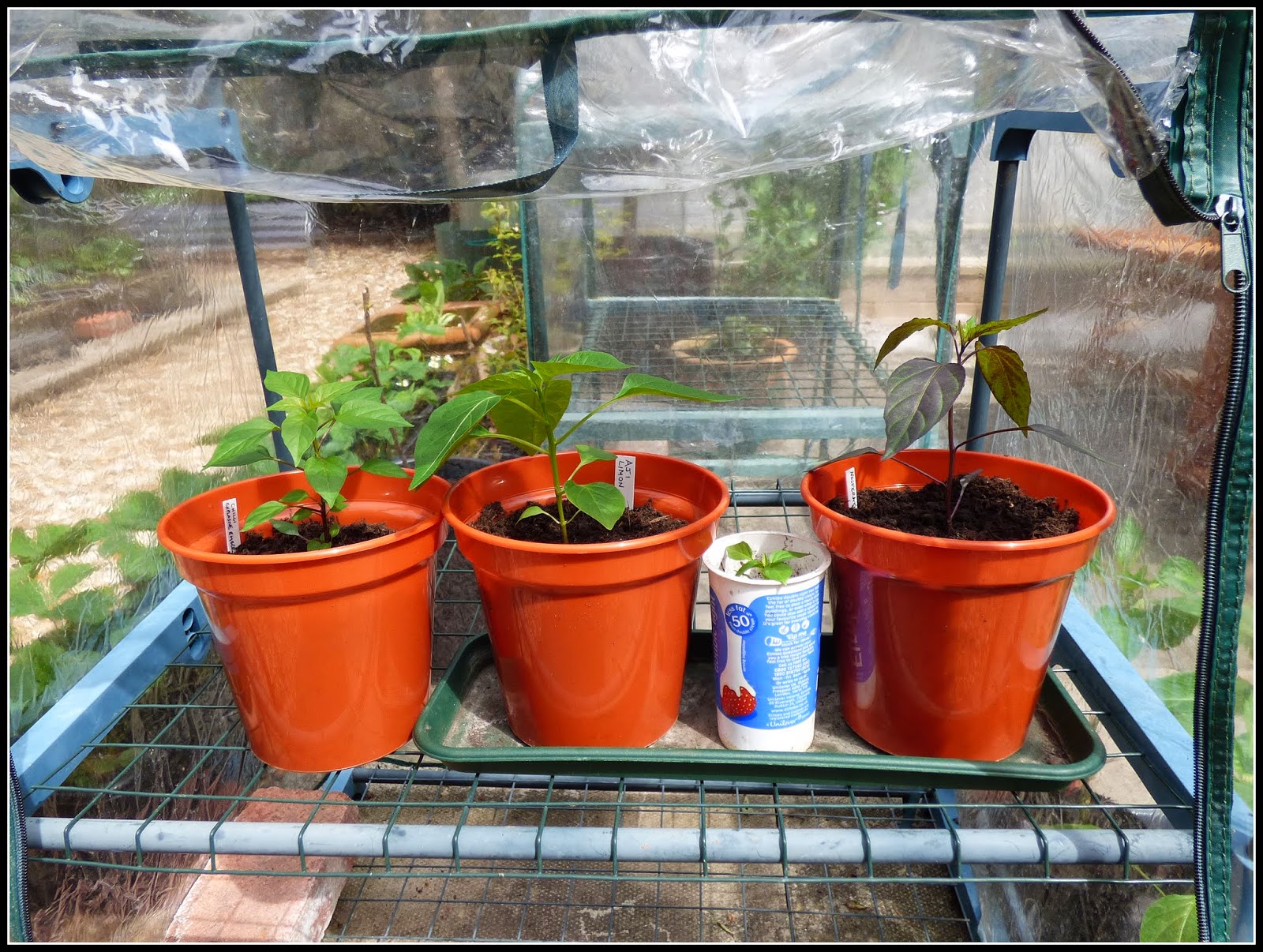 This one is so tiny still that it may not mature in time to produce fruit this year - but it will be interesting to see if I can help it along. 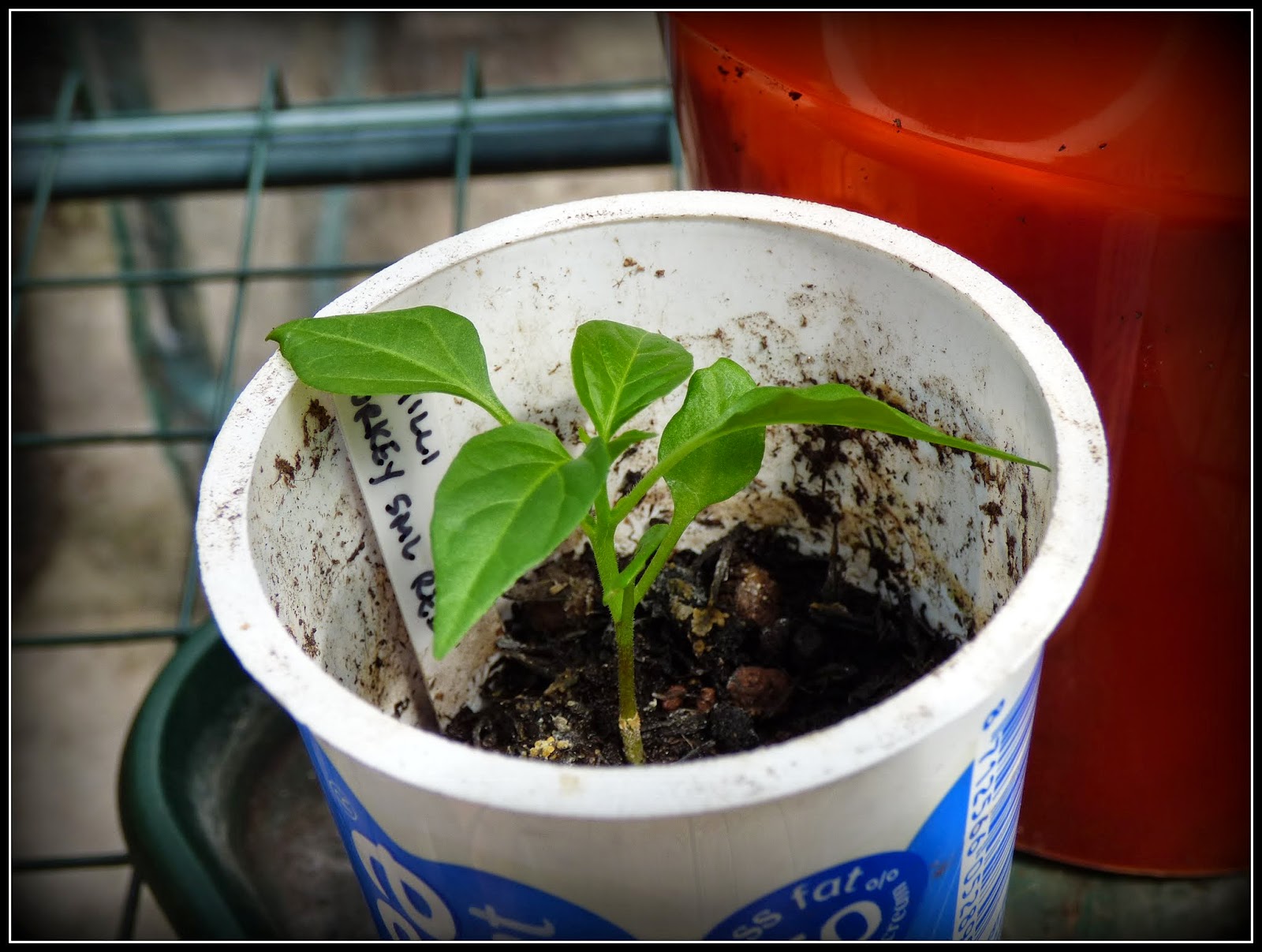 So that's the chilli sutuation at present folks. It may sound like a lot of chillis, but I am only growing 12 varieties, and in most cases only one example of each, so it's actually not an enormous quantity.
Posted by Mark Willis at 12:00