What's wrong with my beans?

Beans are an important staple in my veg-patch. It would be a disaster if they failed - especially the Runners! Unfortunately, I am very conscious that this year's beans are not normal. More than anything else, their colour is wrong. Their leaves are much paler and yellower than usual. Look at these:-

﻿
The shape and overall condidtion of those beans is OK, but the leaves are just not green enough, although I am relieved to see that over the last few days they have gone a bit less yellow - though this is probably because I gave them a dose of general-purpose liquid feed. I wonder what can be the reason for these pale leaves. I suspect it might be a compost-related issue, and that the compost I used (Westland multi-purpose) has inappropriate or insufficient nutrients in it. I am not particularly conscious of what compost I use for what plants, so it is difficult for me to correlate issues like this to the compost used, and anyway all my other seeds seem to have done OK.

Apart from the colour problems, there have been big problems with germination rates. The "Scarlet Empire" ones all germinated OK, (10 plants from 10 seeds)  but the others ("Red Rum") have fared much worse. I sowed only 5 seeds in a single pot, from which I wanted four plants. I didn't anticipate any problems, since Runner Beans normally all germinate, and I reckoned that one spare would be enough. But only four beans germinated, and only one of those is even approaching useable (even this one is tiny and weak): 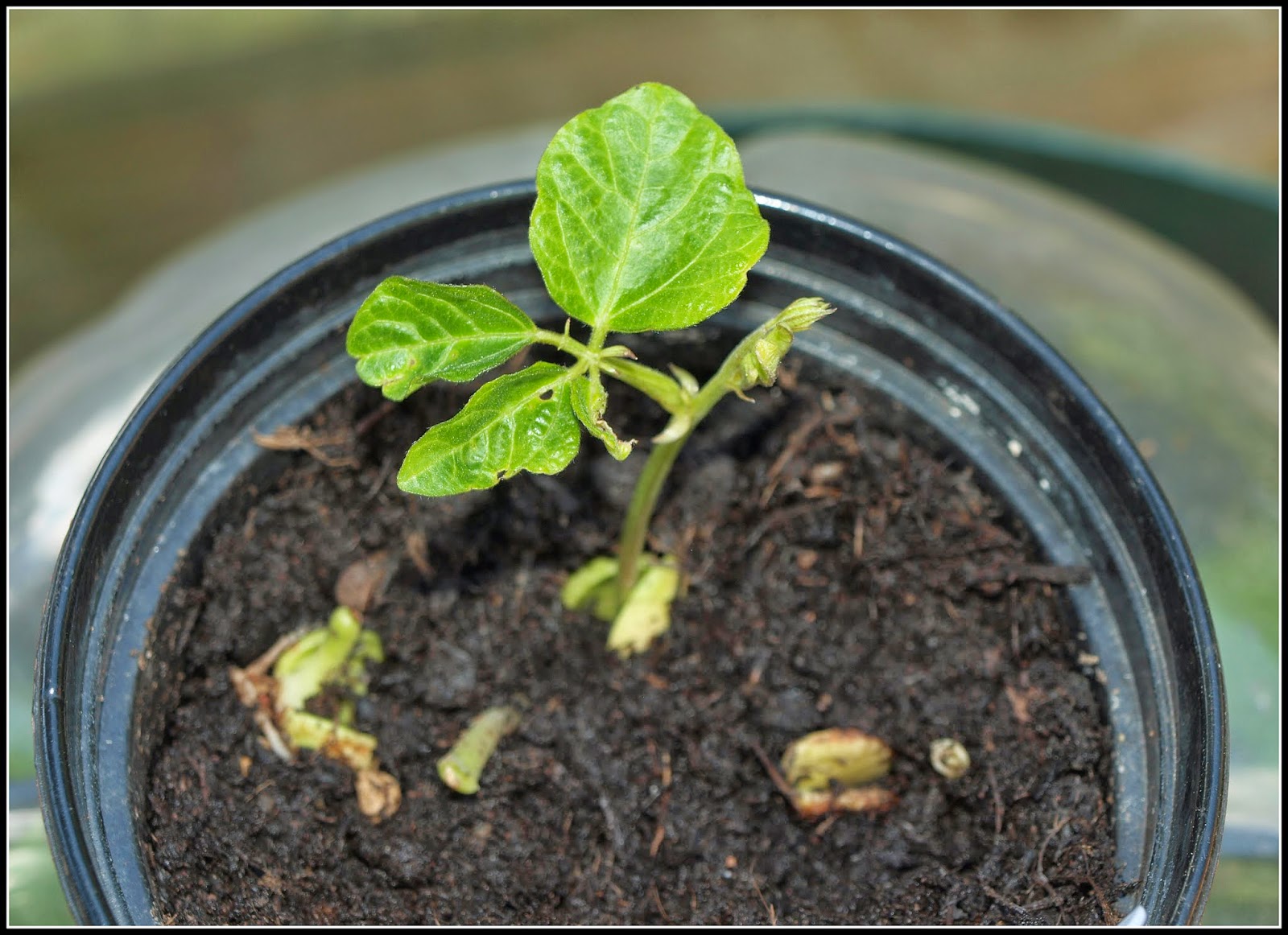 Runners usually form two large single leaves first, on opposing sides of the main stem, before branching-out with triple leaves like the one seen above. [See the second photo in this post for normal-style plants.] Very strange...

The others have come up "blind" - in other words they don't have a proper growing-point, only an abbreviated stump of stem: 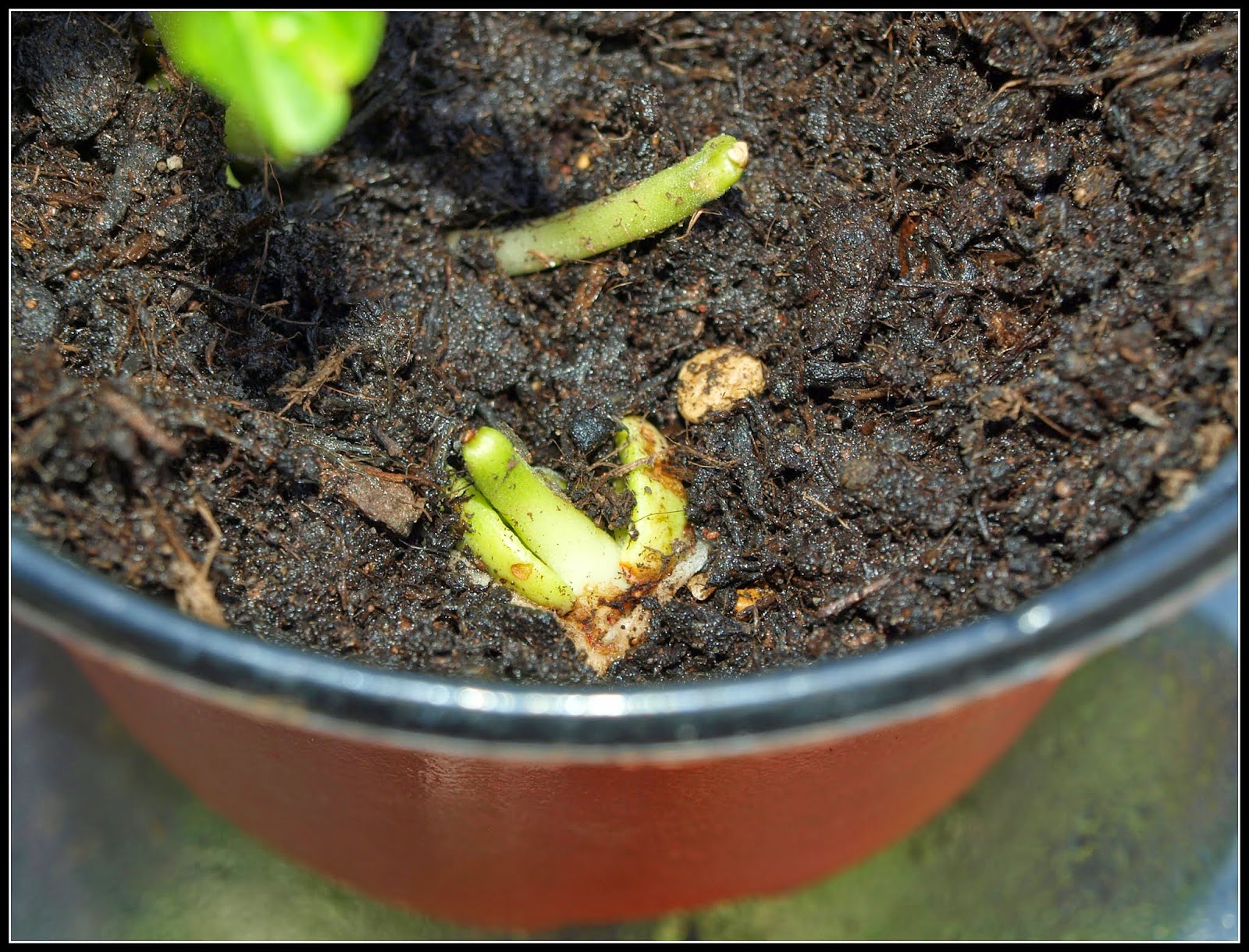 I am absolutely sure that this is not slug damage, by the way. The plants are just deformed. They were very slow in germinating anyway, and before they had even come up I feared the worst and sowed another batch of 5. Only one germinated and this one is very weak and spindly (though at least it has green leaves!).
In desperation I have sowed a third batch, but I don't hold out any great hope of success. It looks as if I will be growing just "Scarlet Empire" this year.

Talking of which, the "Scarlet Empire" have produced an aberration too -  a couple of them have developed two stems from a single bean: 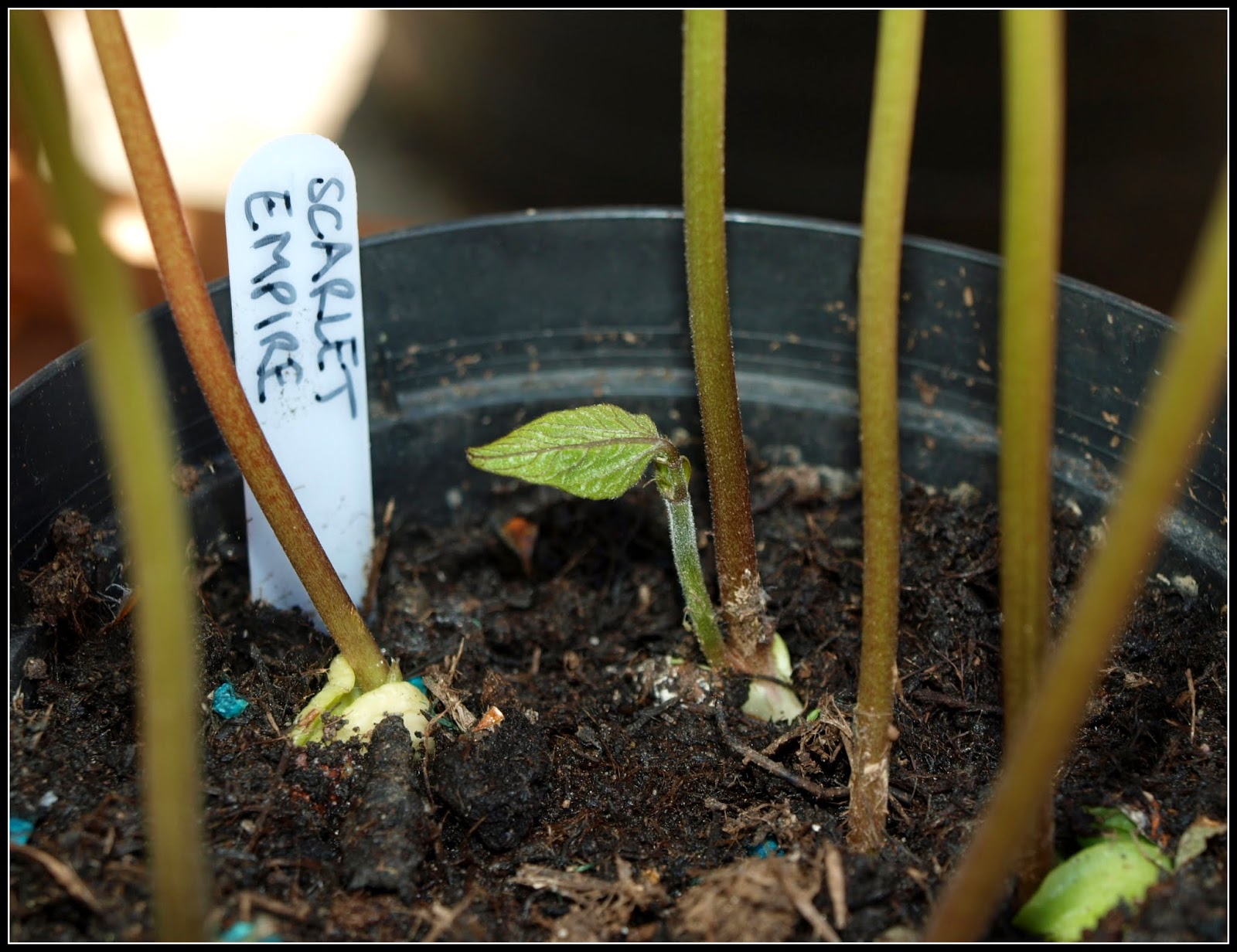 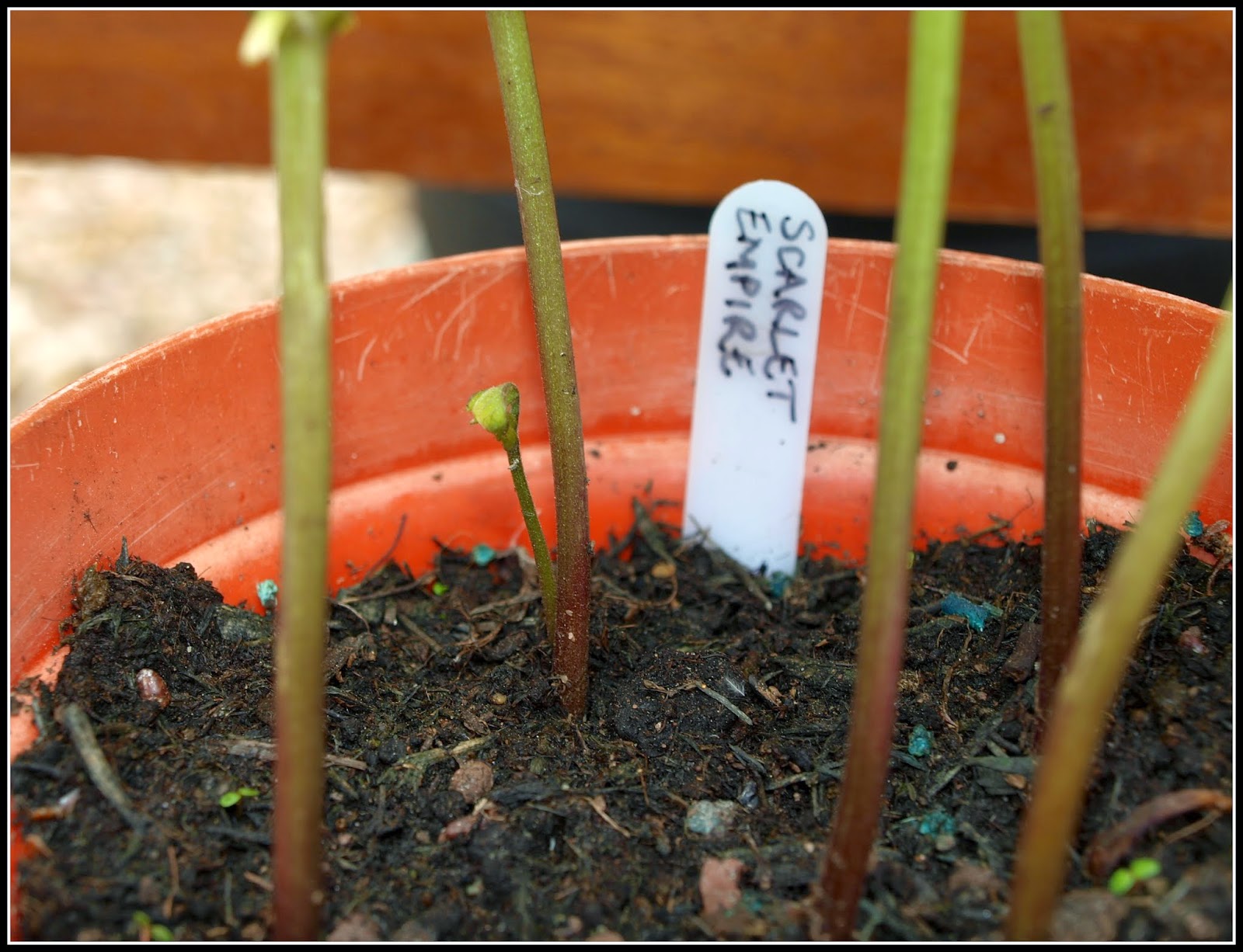 The "Cobra" Climbing French Beans have also germinated very erratically. My pots of these had six seeds in each. Look at the difference in these six:- 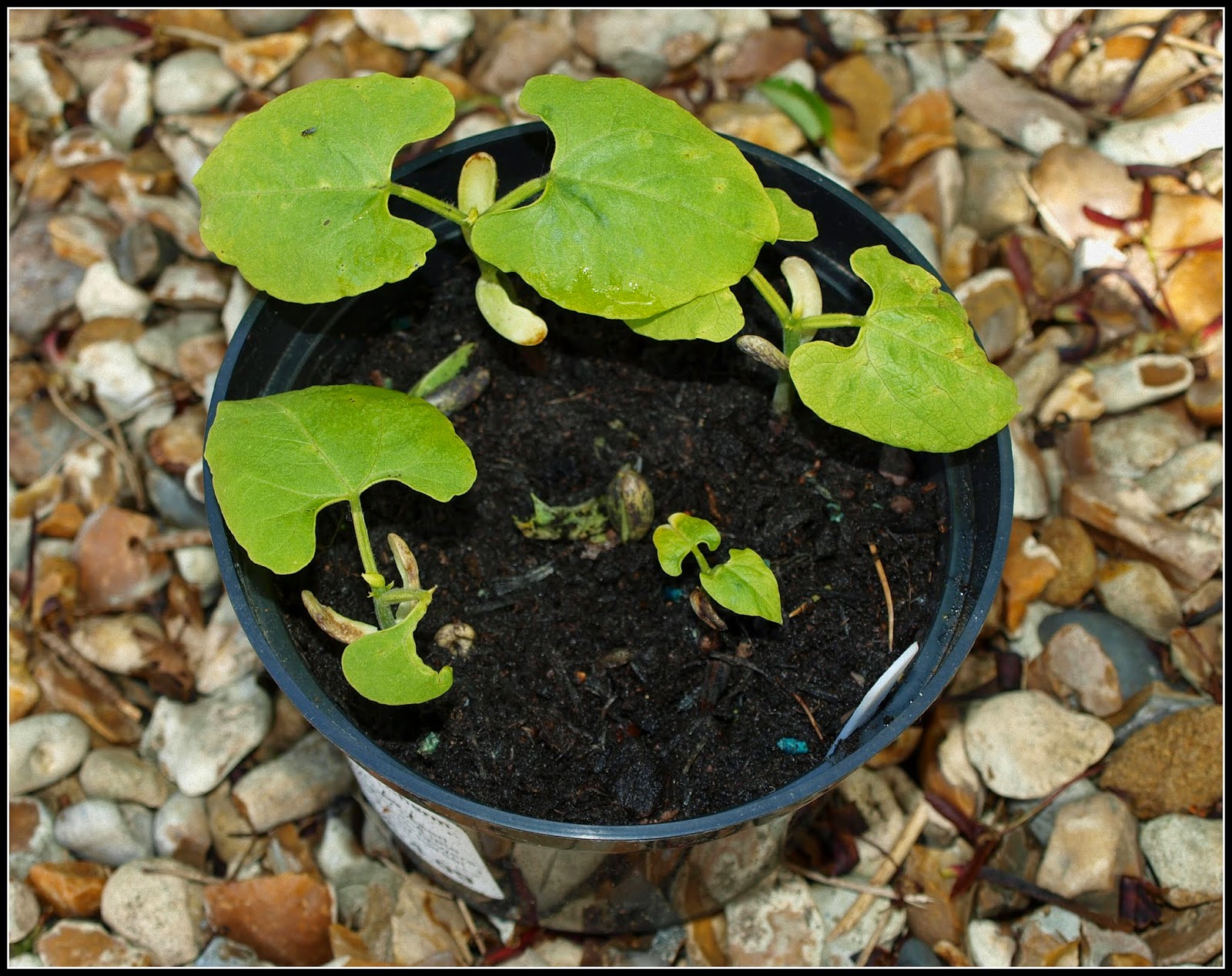 The one nearest the white label is very tiny and doesn't look as if it intends to grow any bigger; there is one only just emerging from the compost (at the 10-o-clock position), and the one in the centre looks as if it is going to produce two stems, just like those Runners. Normally the first leaf appears between the splitting two halves of the seed, but this one seems to have a second leaf coming up from down below: 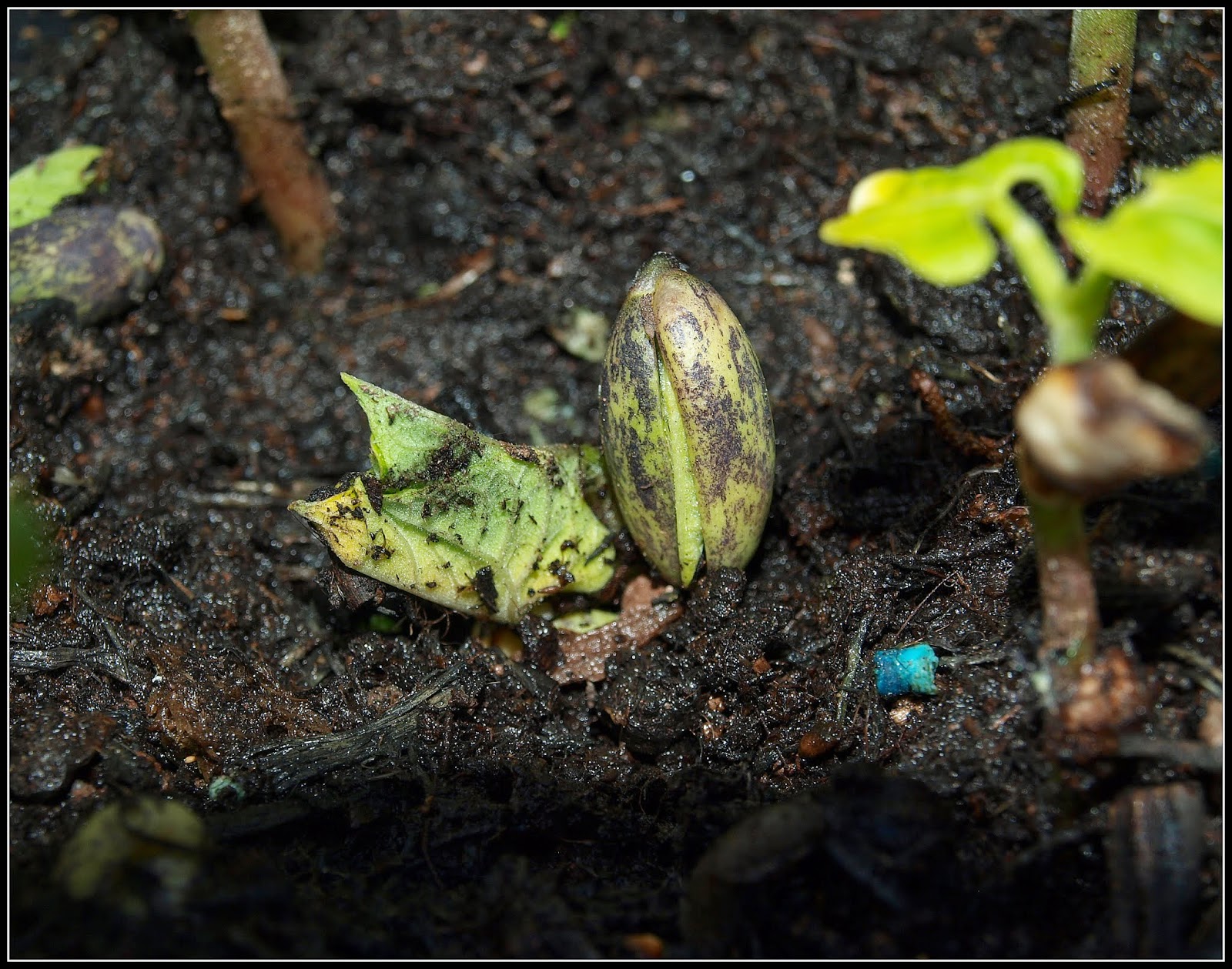 A factor in all of the above may be that the seeds were not fresh. Both types were from 3-year-old packs. This is not unusual though; I often keep seeds for at least that long and have seldom experienced poor germination with Runner Beans or French Beans. I don't know what to make of the situation. It may be just "a bad year for beans", beyond my control, but wouldn't it be nice to know??? The really frustrating thing is that this year I deliberately sowed fewer bean seeds because in the past I have ended up with far too many plants and had to give lots of them away!
Posted by Mark Willis at 12:00