In common with many other gardeners I'm sure, I spent most of last weekend up to my elbows in compost. On this particular occasion, I was actually in the garage, potting-up tomato plants. This was because the wind was so strong I couldn't bear to do the job outside as I would normally do. The tomato plants had got to the stage where they really needed to be transplanted. They had outgrown their little 6" pots, and were very much in need of more space to spread out. Keeping them too long in pots that are too small can administer a check to their growth which will potentially damage them permanently, leading to lower yields in the long run.

This year, the majority of my tomato plants have gone into big (40cm) self-watering pots. I have acquired 12 of these over the last three years, and I have equipped them all with strong metal supports for the canes to which I will attach the plants. 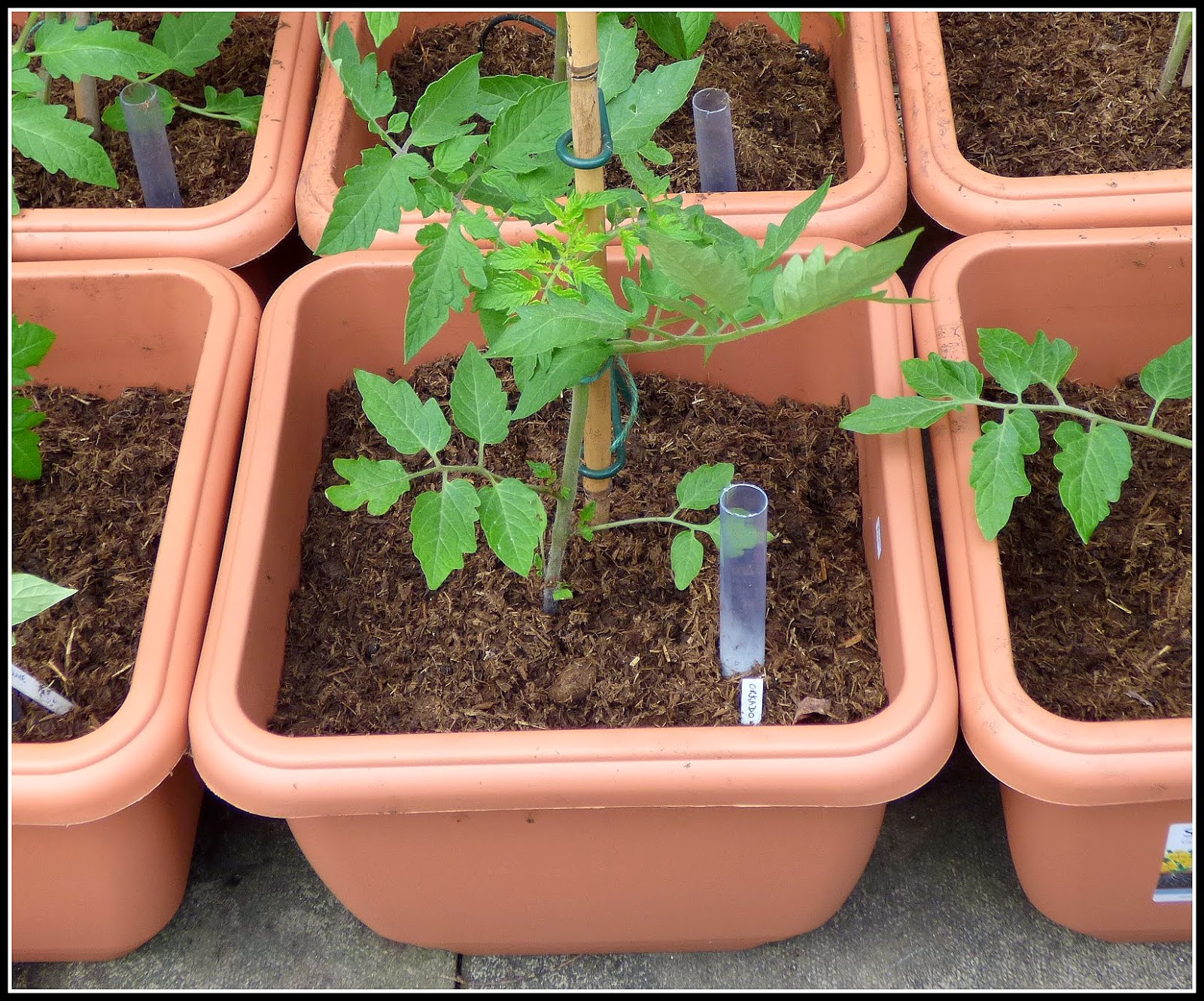 I put the tomatoes in their big pots on Saturday, and got them all ready to go, but I kept them in the garage for the next 24 hours because the wind was so fierce. On Sunday afternoon I decided that I had to put them outside, because if I didn't I wouldn't get another chance till Friday, and this was not a real option because they really need maximum light. So, in great trepidation I ferried them out into the garden, where I arranged them all close to the wall of the house, and erected a barricade of sorts with the wheelie bins and the mini-greenhouses to shelter then from the wind as much as possible (which was not a lot!) 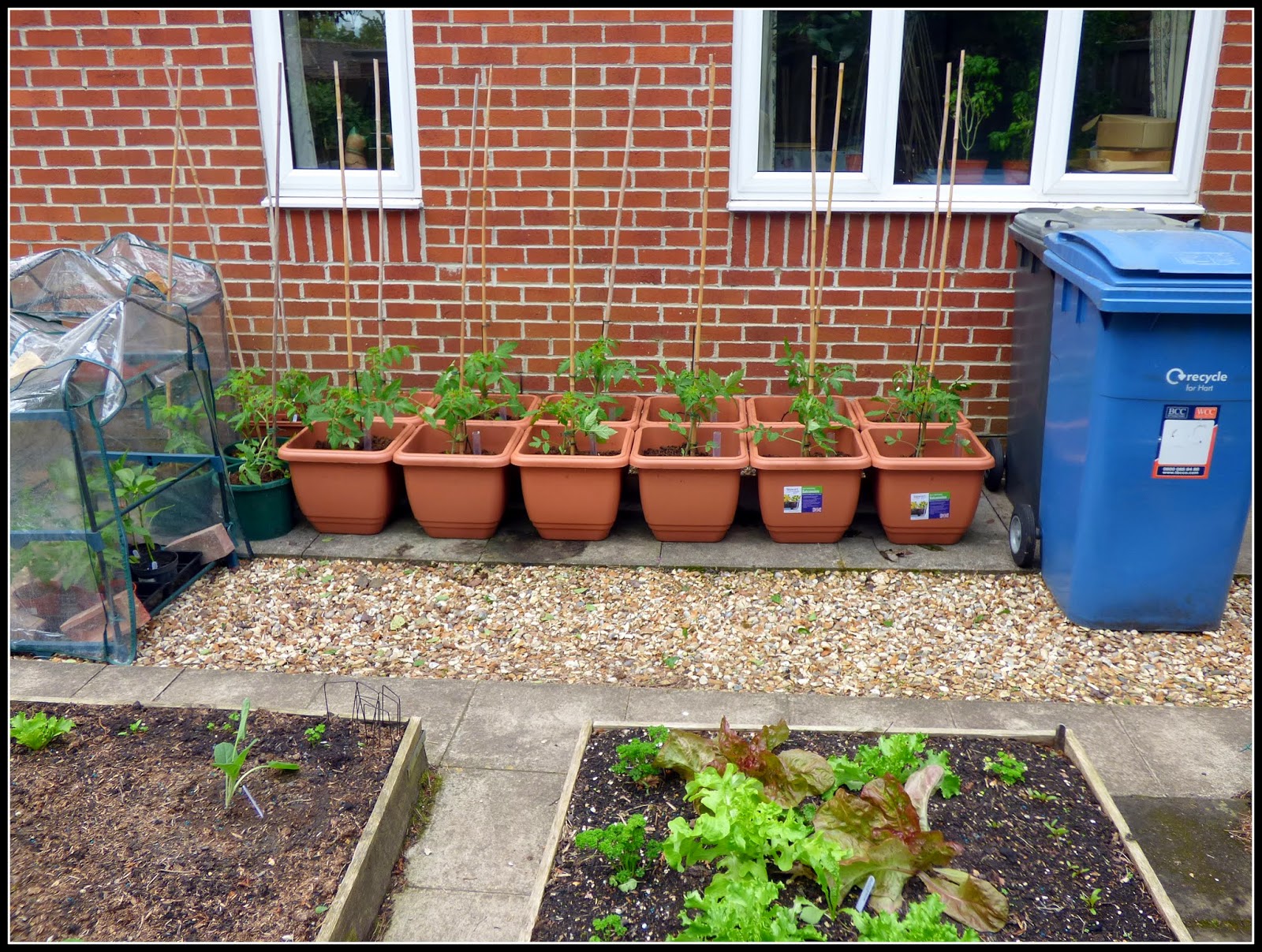 Not all the plants have the luxury of huge pots, unfortunately. Actually, I think that no matter how many of the big ones I had, I would probably squeeze in a few more plants in smaller containers anyway! 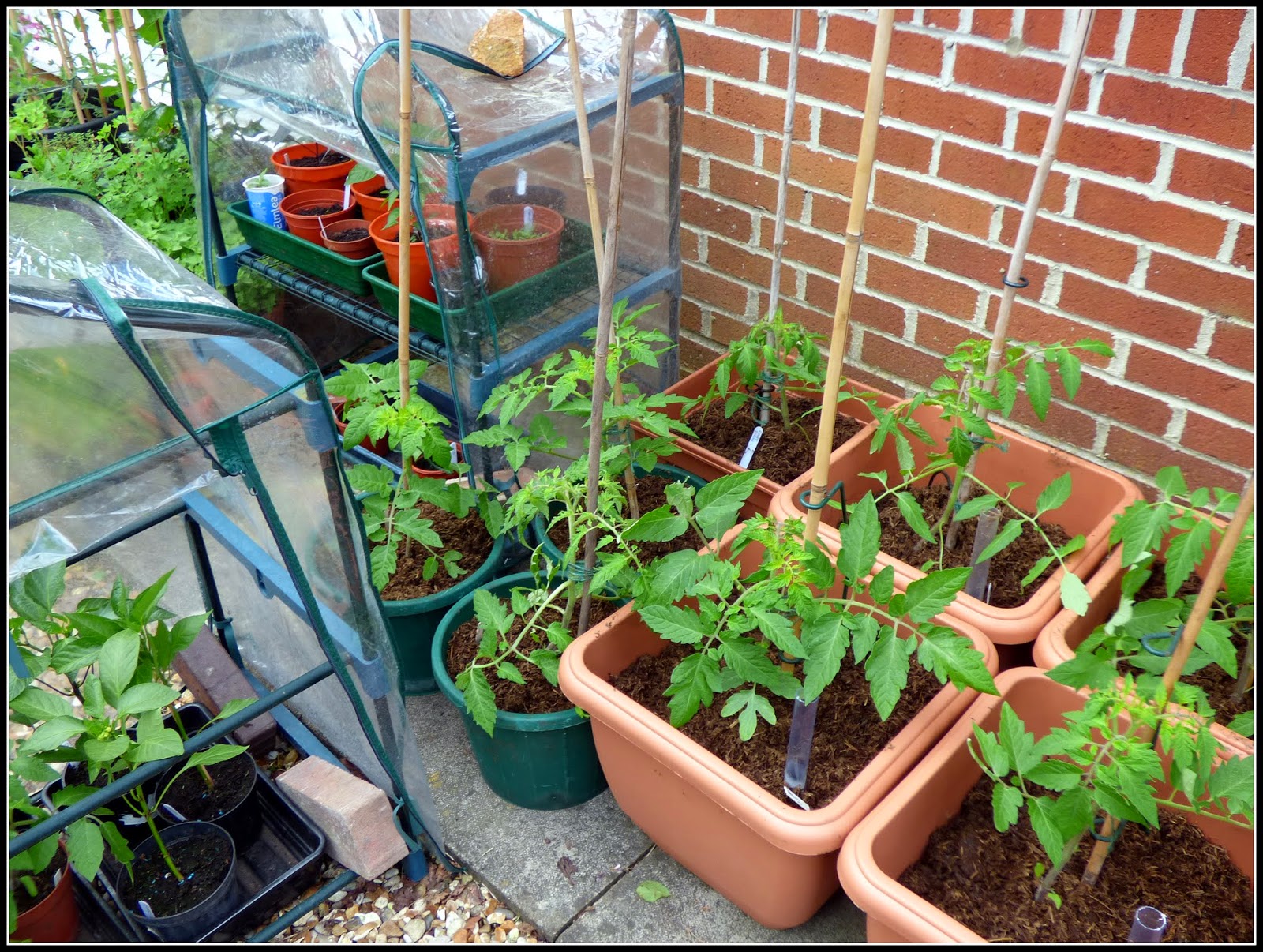 Some of the smaller (bush) tomatoes are temporarily pushed up against the pots of potatoes. The two in black pots, for instance, are "Maskotka", my favourite bush tomato variety. 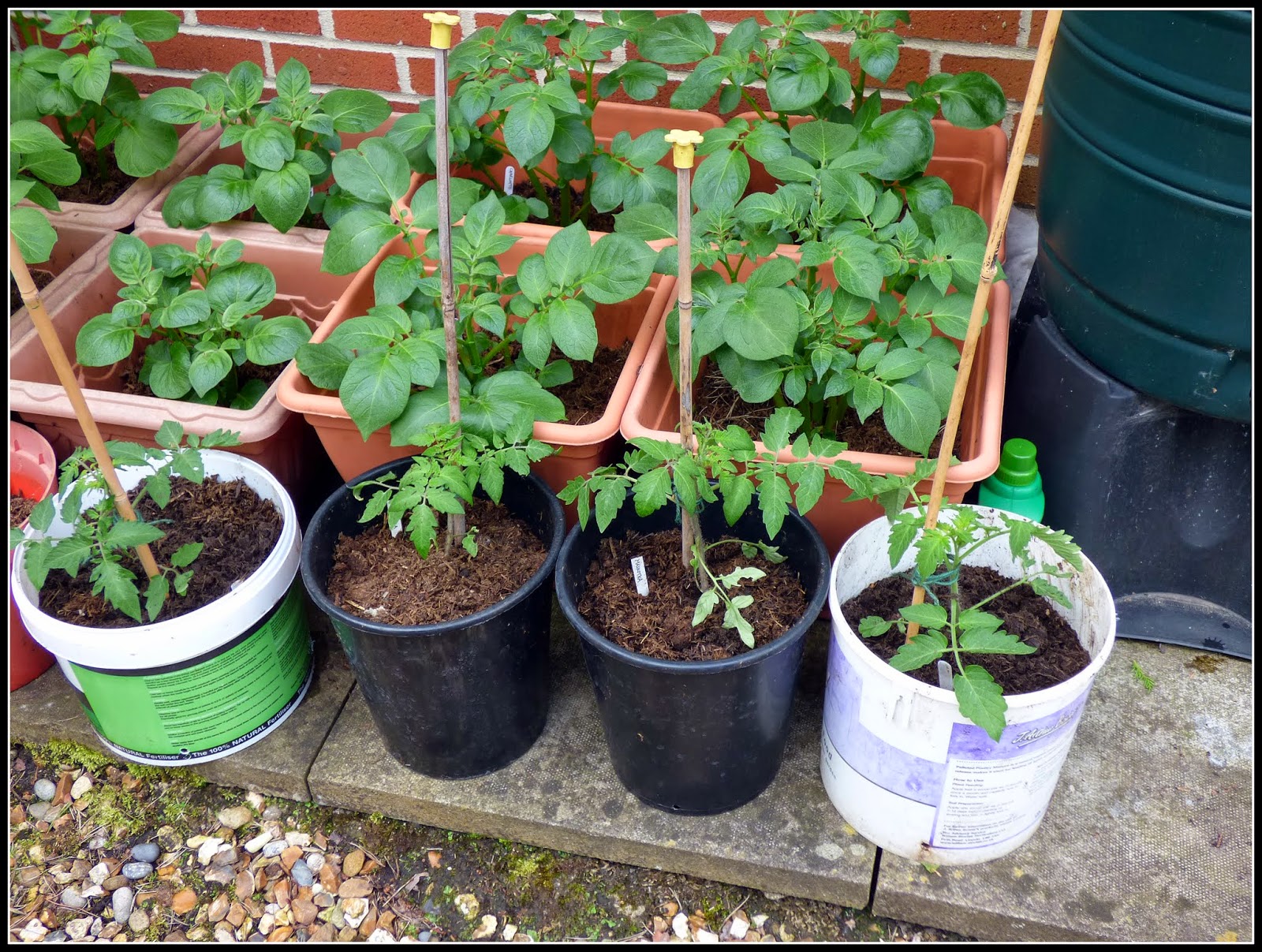 The advent of the tomato plants has caused a certain amount of shuffling-about of the potatoes too. The ones in the terracotta-coloured pots are "Nicola", a maincrop variety. In front of them, in black and green pots, are "Pink Fir Apple", the last ones to be planted. The bushes also seen in this photo are Blueberries. 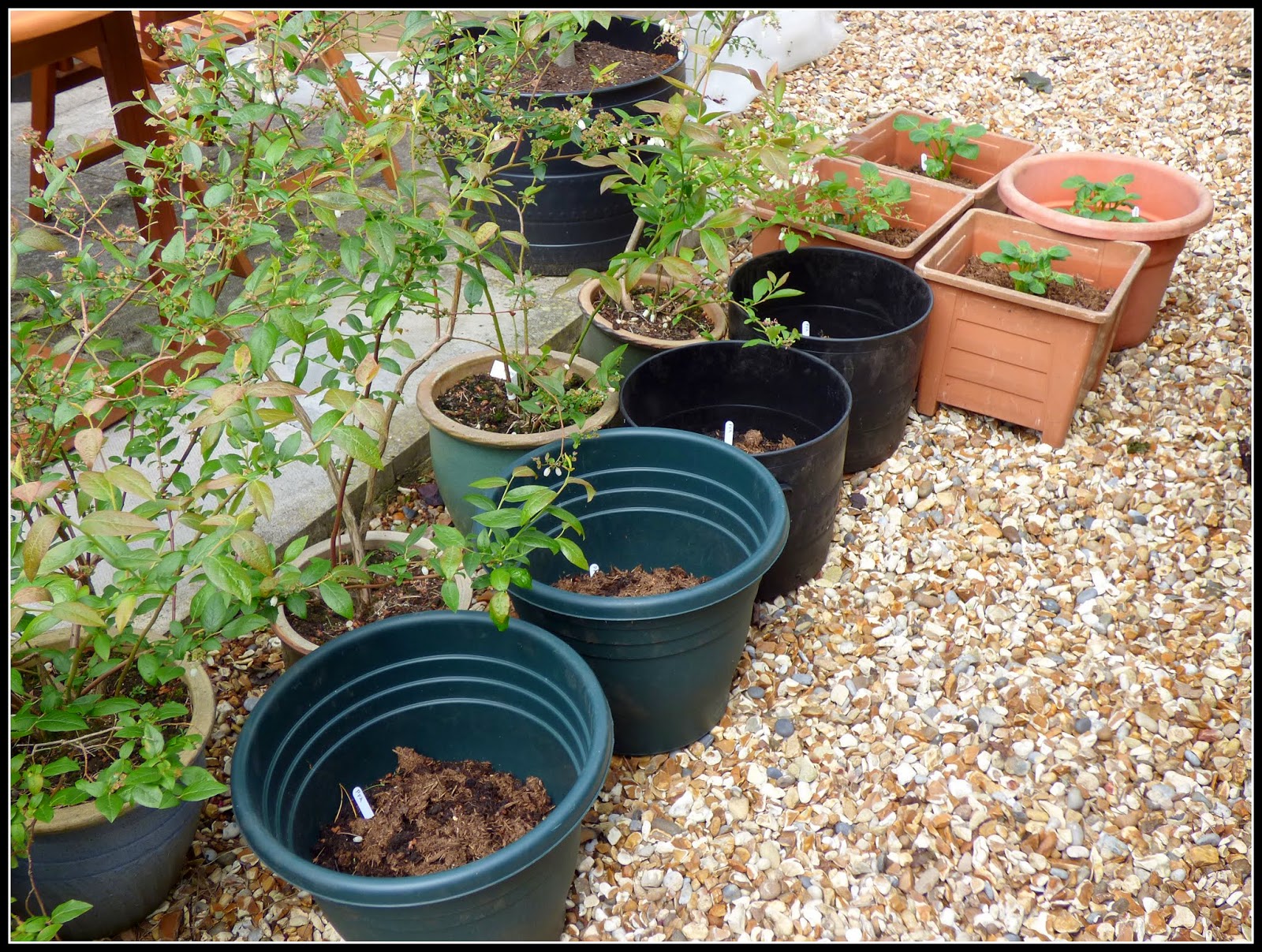 ﻿
I have kept back a few spare tomato plants which I don't intend to grow to maturity, and they are currently accommodated in one of the mini-greenhouses which is acting as a windbreak: 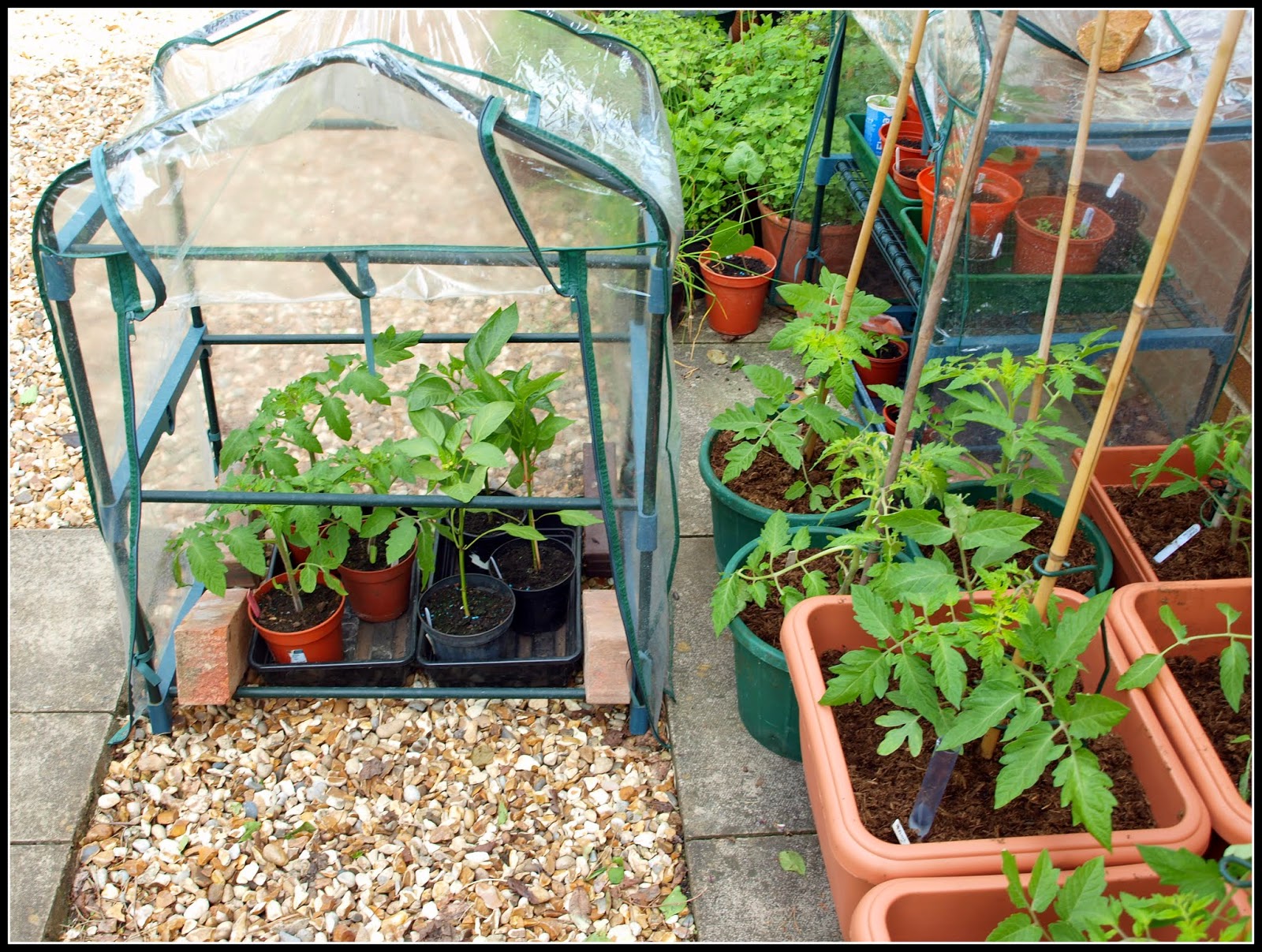 I had been intending to pot-up my chilli plants as well, but in the circumstances I thought it would be unwise to do so, and I have postponed that task till next weekend. The chillis are mostly not as big as the toms, so potting them on is not so urgent.

My garden is now pretty much full of pots, and I still have to find room for the chillis!﻿
Posted by Mark Willis at 12:00