I harvested the first of my Perpetual Spinach a couple of days ago. I grow this variety of Spinach (which is somewhat similar to Swiss Chard) because it is more tolerant of dry soils. I find that the traditional types of spinach always bolt before I get much of a crop. In the UK we have had an exceptionally dry Spring and the soil is really parched, so this year the Perpetual Spinach is even more relevant than normal.


Anyway, I judged that the time was right to take the first few leaves from my young plants. They look bright green, almost yellow, in contrast to the much darker green Swiss Chard. And the individual leaves are much bigger than most types of spinach. You can eat small leaves raw if you like, but the big ones need cooking.
Jane doesn't like Spinach, so I only picked enough for one serving. 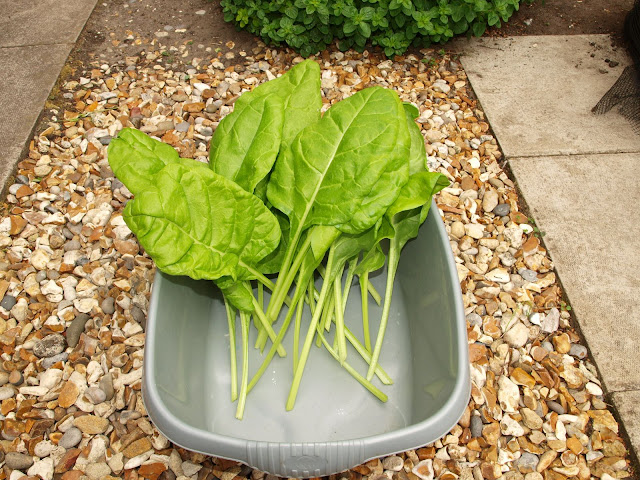 This may look like a lot, but when you cook it it shrinks a LOT. The leaves in my picture went down to about two tablespoonsful. Of course, when I say "cook" what I actually mean is "wilt". Here's a recipe for you...
Preparation:
Serving suggestion:
Serve the warm spinach with a poached egg on top, seasoned with lots of freshly-ground black pepper, and accompanied by some buttered toast.
Posted by Mark Willis at 17:30 11 comments:

Thanks to all those who commented on the "Salads ingredients" post from yesterday. Looks like there are many others out there with a similar interest...

Today's subject though is a Winter veg. Flower Sprouts. You remember Flower Sprouts? They are a new type of vegetable created by crossing Kale with Brussels Sprouts, and they mature in Late Autumn / Winter.

I transplanted my Flower Sprout seedlings into individual pots on 7th May. At that time they mostly had just two true leaves in addition to the cotyledons or "seed-leaves". This is a task that needs to be done carefully, to avoid damaging the roots. Also, make sure that the compost into which you are transplanting is thoroughly moist, in order to reduce stress to the young plants. 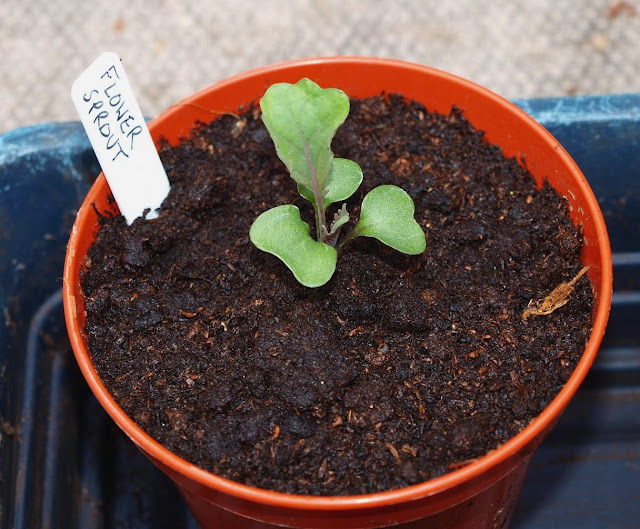 After transplanting, put the plants in a cool shady place for a while, to allow them to recover. (It's like a human spending some time in the Recovery Room after a surgical operation!). They may initially go droopy, but should pick up after a few hours, after which they can go out in the light again. 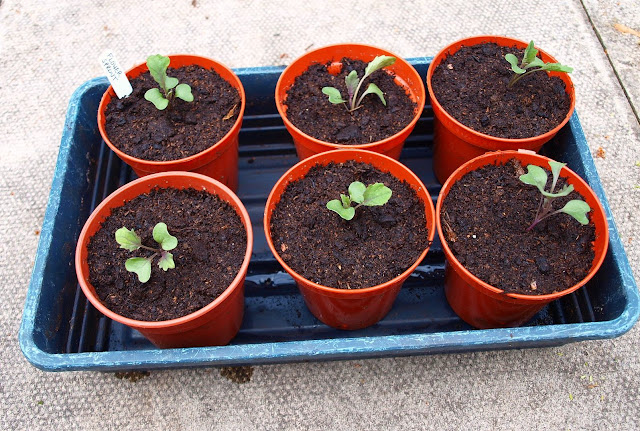 ﻿In the last three weeks my plants have grown a lot. 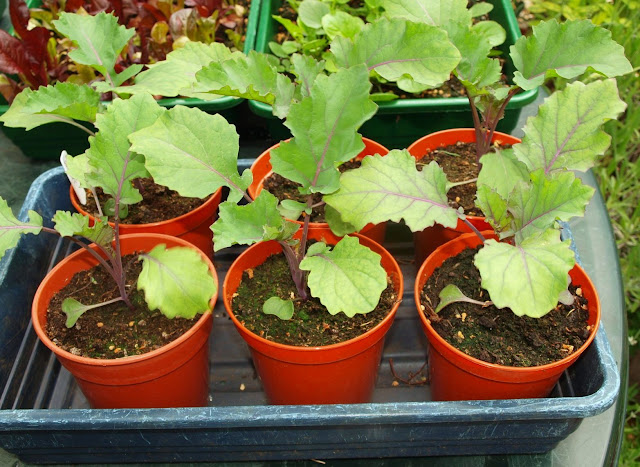 Some of the leaves are looking a bit pale and yellow. Perhaps this is a sign of insufficient nutrients. If so, they are probably ready to go into bigger pots, with some fresh compost. 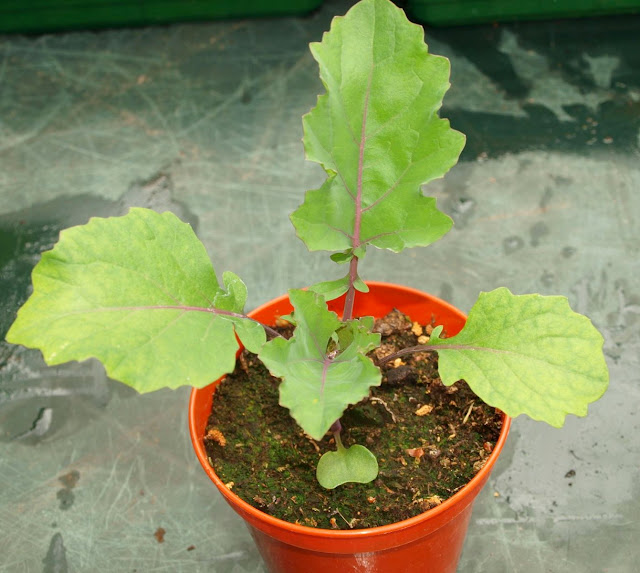 The challenge for me is to keep the plants in good condition until such time as I have space to plant then out in their final growing positions - which will be the place where the Broad Beans are now. If at any stage their growth is checked by perhaps being under-watered or having insufficient space to expand, they are likely to be less successful, and may even bolt. "Why not sow them later?" you may ask - well, the answer is "because the plants wouldn't be big enough to mature before the Winter." This next photo shows the difference that just one pot size can make: the two plants were transplanted on the same day, into the same type of compost, but one is in a slightly larger pot than the other. The one in the big pot looks not only bigger, but healthier too. 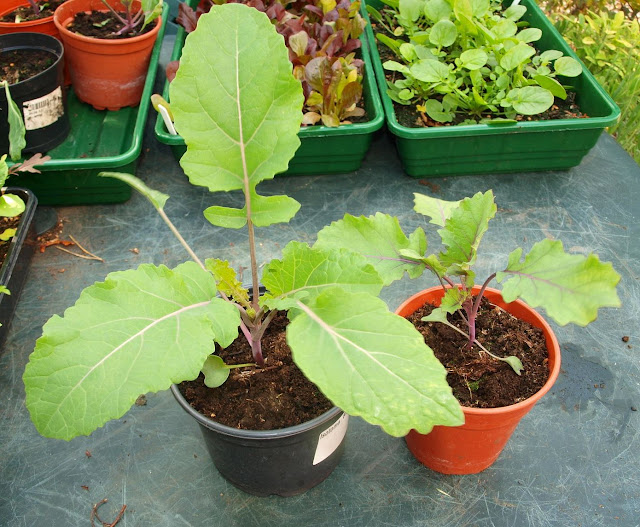 Of the ten plants I kept, I think one is an impostor (plant at left in the photo below). It is different to all the others. The leaves are a different shape, and the stem is a different colour. Is this maybe the result of a stray ordinary Brussels Sprout seed having accidentally crept into the Flower Sprouts seed-packet, or is it a unique new hybrid? 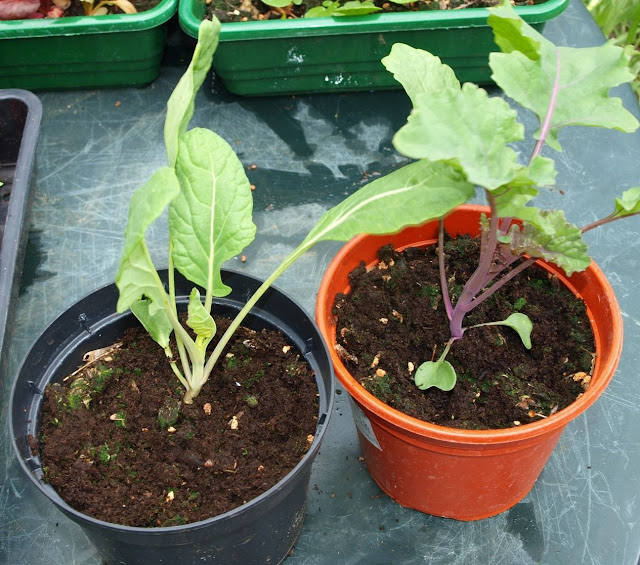 We eat a lot of salad. Which is just as well, when you see how much of it there is in my veg plot...

This post is aimed at demonstrating the variety of interesting and easy-to-grow salad ingredients you can produce in a very limited space. Even if you only have room for one seed-tray, you can still grow a viable quantity of salad! 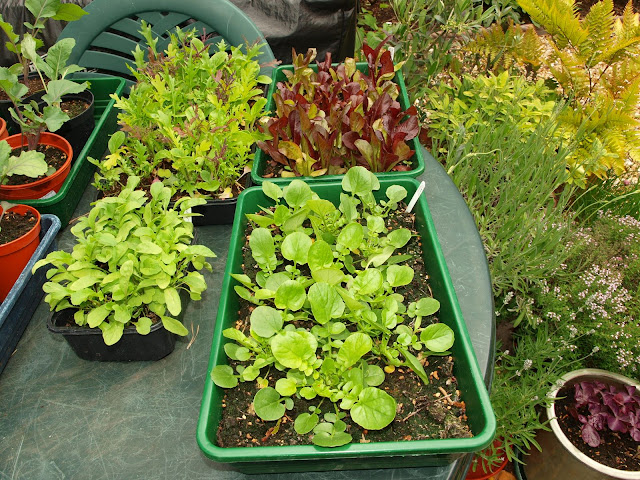 ﻿ These lettuces growing in one of my raised beds are planted far too close by normal standards, but I find I can get a decent crop this way nonetheless. Most often I pick individual leaves of lettuce rather than a whole plant at a time. If I wanted to grow good-looking specimens I would space the plants further apart.

﻿ ﻿ ﻿ ﻿
﻿ ﻿
Much as I would like to devote another whole bed to growing lettuce, I cannot afford the space, so some of the plants have to be squeezed in amongst some other things. They won't get as much light as they would like, but they will still produce a reasonable harvest.

OK, you've seen mine, so what salads have YOU got growing in YOUR garden...?
Posted by Mark Willis at 17:30 15 comments:

I consider myself to be primarily a veg gardener. However, having now discovered the joys of photography I have realised that I am also keen on plants that are primarily ornamental. This post is about some of the non-veg plants in my garden at this time.

Halfway between the edibles and the ornamentals (for me at least) are the ferns. Mostly green (like many vegetables) and with no flowers as such, they are still hugely decorative. I love their symmetry. 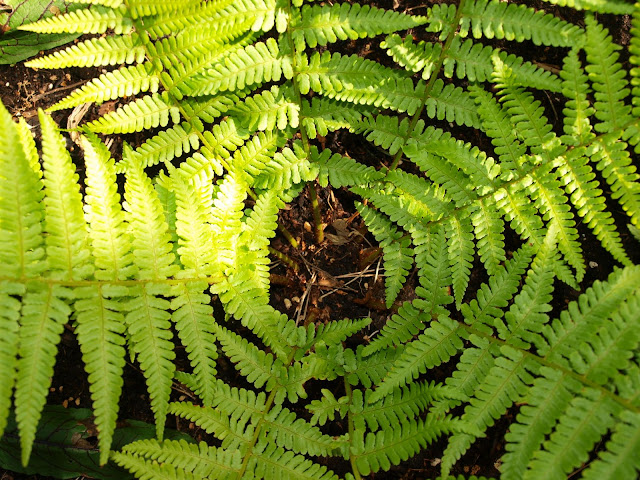 I have planted these ones in a place where they will serve a useful purpose - screening the rather unsightly plastic tub in which my cucumbers are growing. 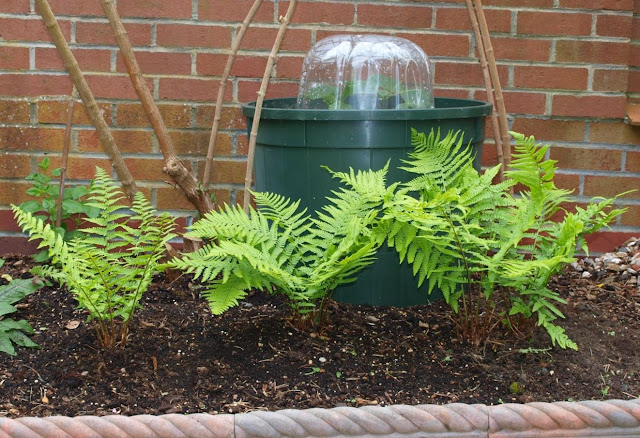 This fern is one half of the one I divided and re-potted in the Autumn. It looks pretty handsome to me!You'll notice that I have put gravel around it to suppress the moss. 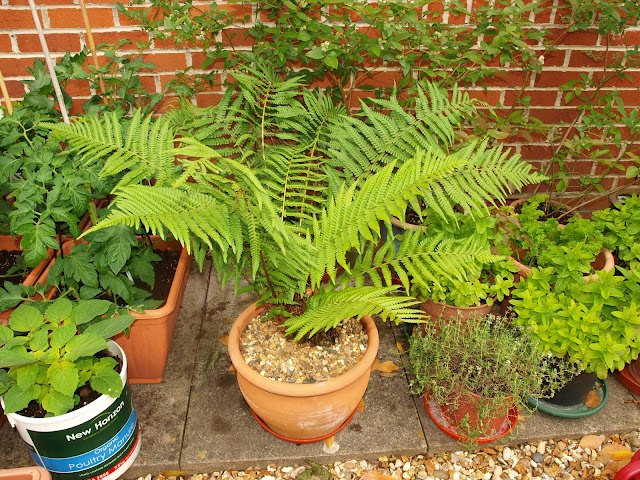 More traditionally decorative are the Roses, the archetypical flower of the English cottage garden . This white one was in my garden when I bought the property in 1991. I don't know its name. 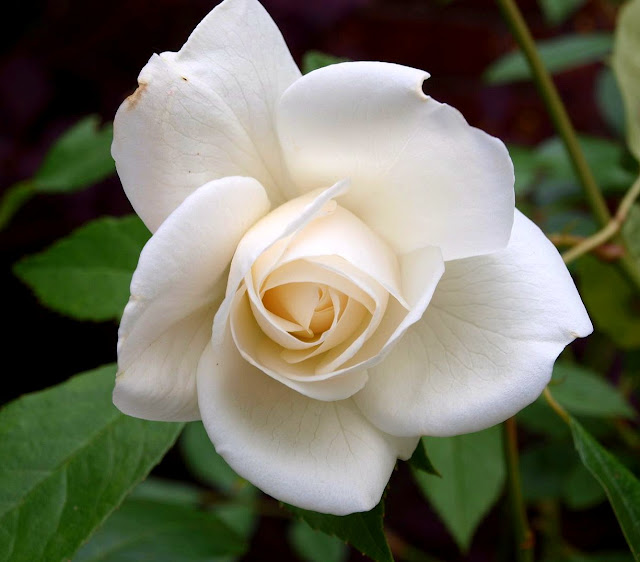 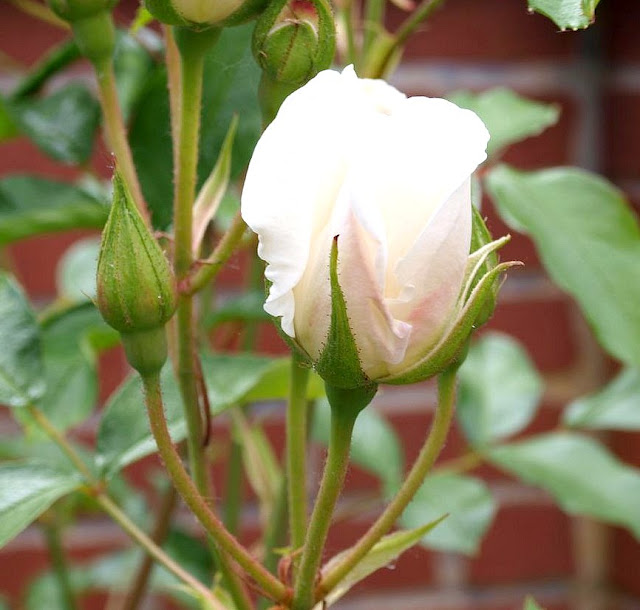 This is a rose called "Sunset Boulevard". Jane won the plant for me in a competition some years ago. 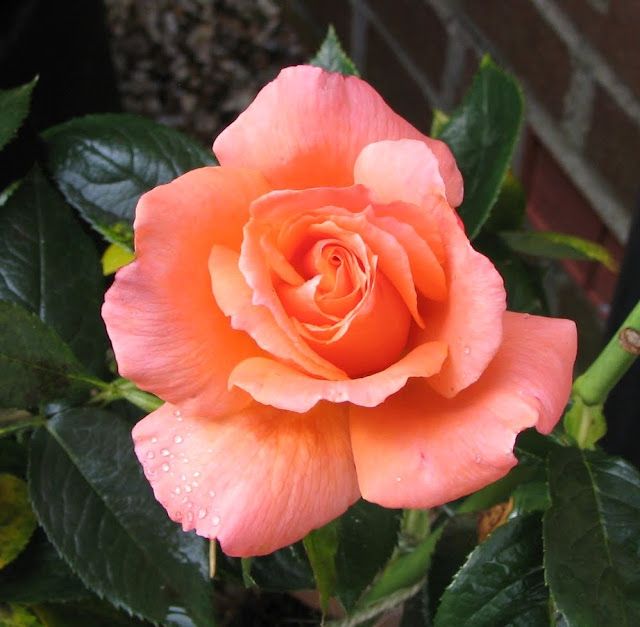 Another favourite of mine is the Geranium. To me it epitomises the Mediterranean. I know that I do not live in the Meditterranean area, but I have striven to create a Mediterraean effect in the patio part of my garden: Lavender, Bay trees, an Olive tree, lots of herbs - and Geraniums: 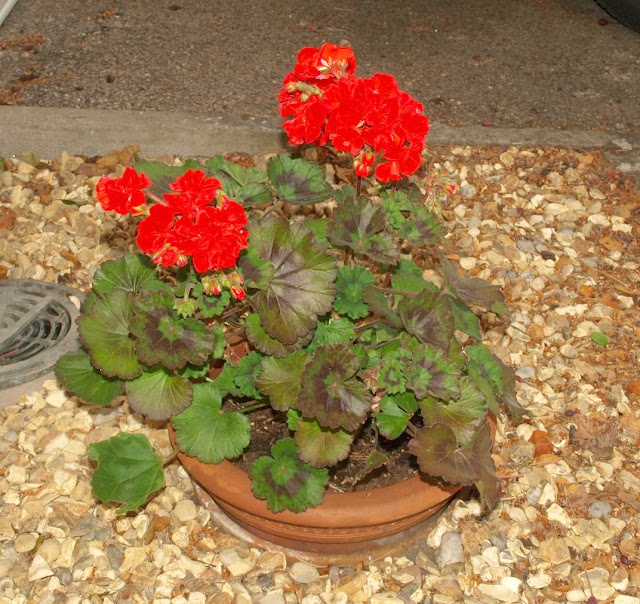 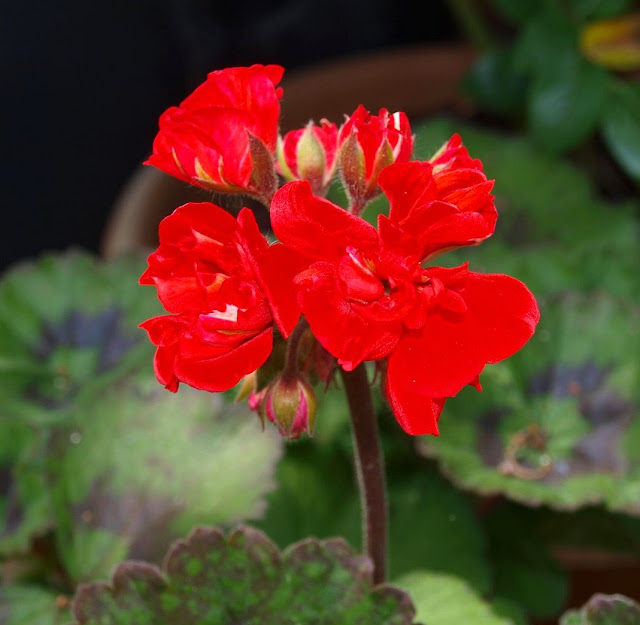 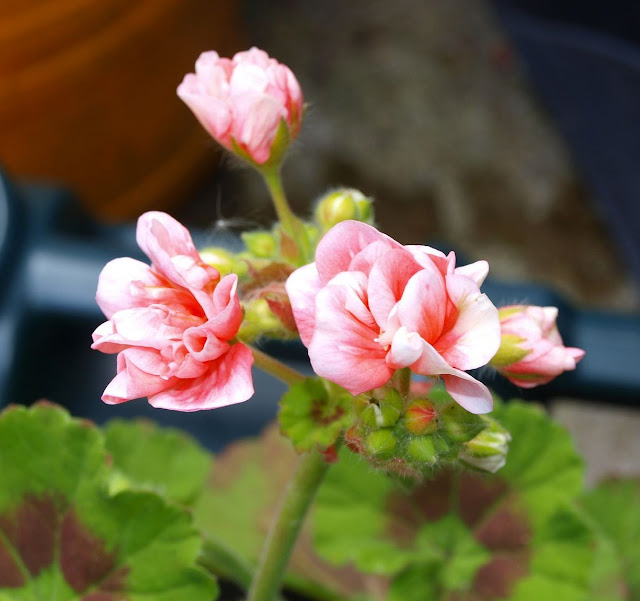 ﻿Lavender. This one is "Hidcote". Still at the tight bud stage - it will be showier in a few days' time.
P.S. Have a look at my daughter Emma's blog Mellow Mummy  -- it's normally about parenting and baby stuff, but this time she has written about Lara's gardening exploits. I shall have to look to my laurels...
Posted by Mark Willis at 17:30 8 comments:

Progress - despite the weather!

I think we may have scored a "hole in one" with the Marrow, if you know what I mean. In order for a fruit to "set" or begin to grow, the female flower has to be pollinated with pollen from a male flower (this sounds like a sex lesson...). In order for this to happen you obviously have to have both types of flower mature at the same time, and for some reason this often doesn't happen at first, and the different genders of flower come on at different times. Not this time, it would appear. 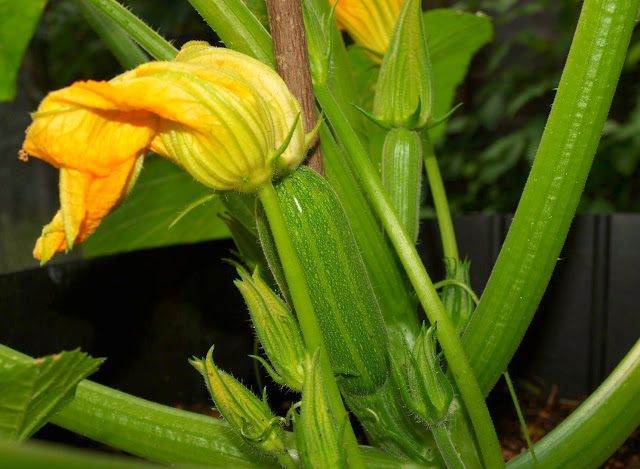 In the picture above you can clearly see the male flower (understandably looking a bit droopy) in front of the embryonic fruit underneath its equally droopy female flower. Of course we don't see here the crucial Third Party in the affair - the bee which may have helped make the transfer of pollen.  If (and I emphasise IF) the bees have done their thing, this marrow will soon be swelling. On the other hand, if pollination has not occurred the fruitlet will turn yellow, go soft, and eventually fall off the plant. We should know within a day or two...


The Cucumber plants have taken a battering at the hands of the sustained strong winds we have had recently. Several of the leaves have gone brown at the edges. Not major damage, but it will check the plants' growth for a while. 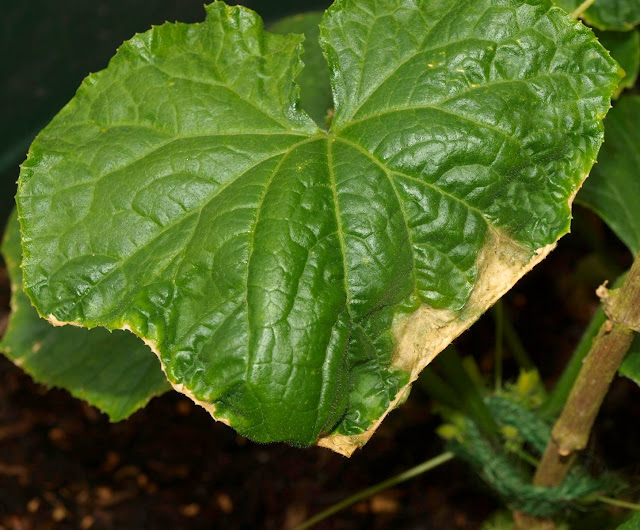 As regular followers will know, my climbing beans also suffered severely from wind damage, and several of them have been attacked by underground "beasties" of some sort, so I am thankful that I sowed another batch of bean seeds just in case. I may have to use a few of these:- 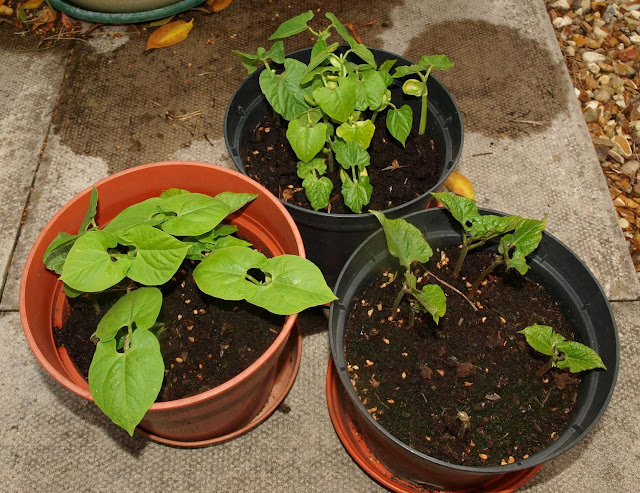 ﻿The two types of Savory have been making progress too. Perhaps unsurprisingly, the ones that are most advanced are the "spares" which didn't get transplanted to individual pots - hence didn't have to endure so much root-disturbance. This one is the annual Summer Savory. Hopefully it will be mature at about the same time as the Broad Beans with which it goes so well.
The Winter Savory has grown comparatively slowly, but then it's a perennial, so it can afford to take its time more than the annual Summer version.
﻿

﻿Here's an example of how I maximise the use of my limited available space. I have planted a few lettuces at each end of my rows of climbing beans. I anticipate that they will be ready before the expanding foliage of the beans blots out their light. This is why I have only put them at the ends of the rows, not all the way down the centre, where less light would be available. These red lettuces are the variety "Delicato", seemingly very similar to Red Oak Leaf. I'll treat it as a cut-and-come-again lettuce, picking individual leaves rather than cutting the whole plant in one go. 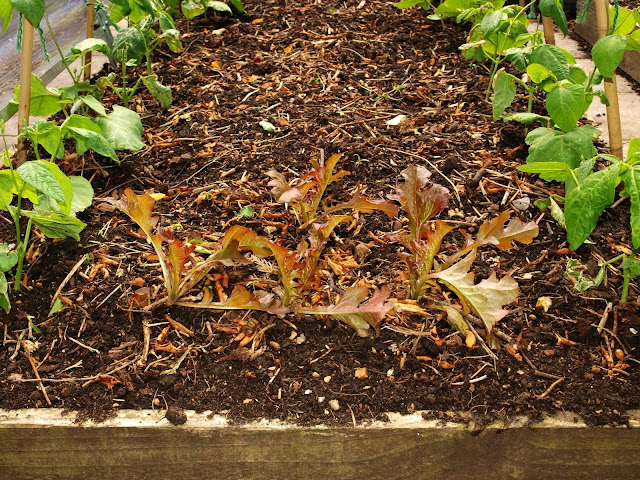 Unusually for us in the UK at this time of the year, I have had to water my beans (and lettuces) with the hosepipe every couple of days, because we have had very little rain. The strong wind has exacerbated the drought too. In circumstances like this I am very glad that my veg plot is right outside my Living Room window, and not on an allotment at the other side of town. It means that I can give it the attention it needs, every day.
Posted by Mark Willis at 17:30 7 comments:

﻿
﻿All the creatures in the photos above are "above-ground" ones, but I find that the worst enemies are the "below-ground" ones; the ones you can't see until it is too late. You usually only become aware of them when your plants wilt and die. I have had this problem recently with some of my bean plants. One day they look perfectly healthy, and the next they are dead. When I dig them up I find underground a squishy stem riddled with small creamy-white maggots. I had thought these were the larvae of the Vine Weeveil, but having looked at several pictures of Vine Weevil larvae on the internet I don't think they are. They look a lot like cabbage root fly grubs. Do Cabbage Root flies attack beans as well? Why would they do that when there are plenty of nice brassicas in my garden? I had this problem last year - except much more severely. I had to sow three lots of beans before I was able to get a viable set of plants. My remedy has been to apply Vine Weevil nematodes, and this year the problem has not been so acute, but maybe that is just down to luck - especially if the things are not Vine Weevils.
Posted by Mark Willis at 17:30 9 comments: