Many of you will be aware that I have recently spent some time helping my MIL to re-establish herself in her own home after a spell in hospital. Unfortunately, although she is better in many respects she still needs a lot of help with mobility. She is very fortunate to have a real friend living next door, who assists her with lots of things, on a regular basis. This is Jed Higson, who describes himself as my (deceased) FIL's best mate. "We were like this.." he says, crossing his First and Index fingers in the traditional sign of closeness. 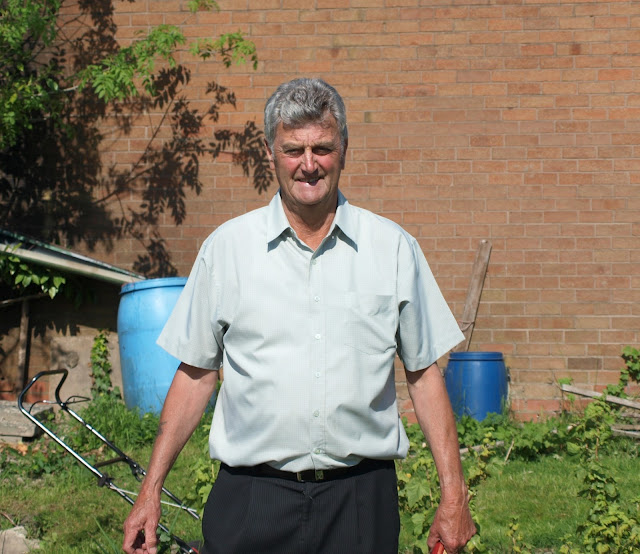 Jed is the best sort of neighbour you could possibly wish for, and even better (for me at least), he is an avid veg-gardener! Even while we were staying he came round bearing gifts of leeks and rhubarb. Jed and I (obviously) got talking about gardening and he offered to give me the guided tour of his allotment, and this of course was not the sort of thing I would ever refuse...

Jed and I evidently have some things in common when it comes to gardening  - for instance his preference for growing edible plants - but we also differ in some respects. Case in point: Jed's shed: 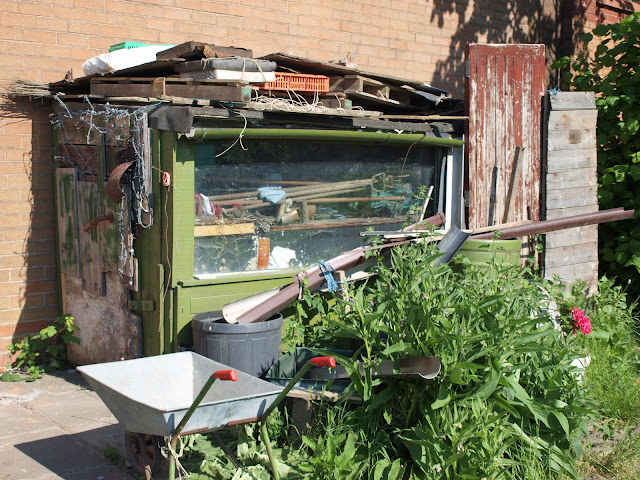 I think this is what you might call "boutique style" or "eclectic"! Certainly nothing like my bog-standard 6x4. Notice the rainwater collection arrangement on the front. Jed told me that once he found a couple of down-and-outs ensconced in his shed supping the stale beer he was saving for slug-traps.

Jed grows a wide variety of crops on his plot in the Allotments. Actually he has several small plots within the same Allotment area, so for me it was hard to identify exactly which was his bit, and which belonged to someone else. No doubt about these potatoes though:


Jed's gardening style is one of "Laissez faire". He doesn't rigorously remove all the weeds. He just takes out the biggest ones and lets the veg fend for itself. I was surprised though to find that Jed does not support his peas in any way; they are left to sprawl - which is in a sense more natural - but probably makes them more vulnerable to slug damage.


This is a general view of the corner of the Allotment area in which Jed has most of his ground. 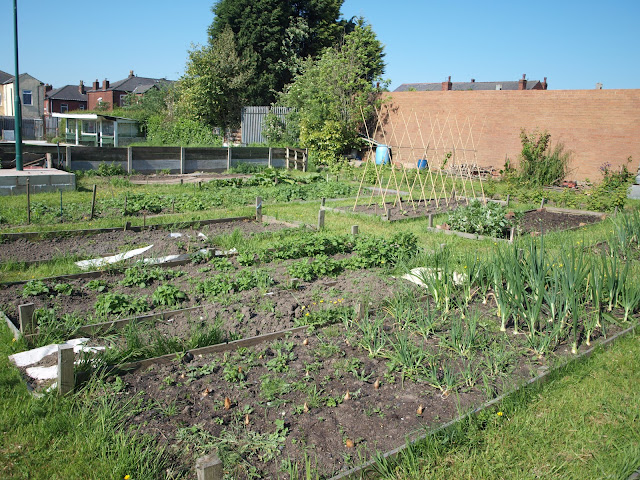 See that brick wall in the background? It is the last remaining part of a recently-demolished factory. I commented to Jed that it must be a useful feature for providing shelter to the plots, but he was more concerned that the demise of the factory had brought an end to their previous water-collecting arrangements. Apparently all the water from the factory roof had been diverted in to a series of water-butts to provide a supply for the Allotments, but now that is no longer possible. Allotment people are normally pretty ingenious types, so I expect they will soon come up with some suitable replacement method!


This well-organised coldframe and raised bed set-up belongs to one of Jed's plot neighbours. (You can see Jed's shed in the distance). Just look at the depth of that raised bed! You ought to be able to grow some prize-winning parsnips in that. 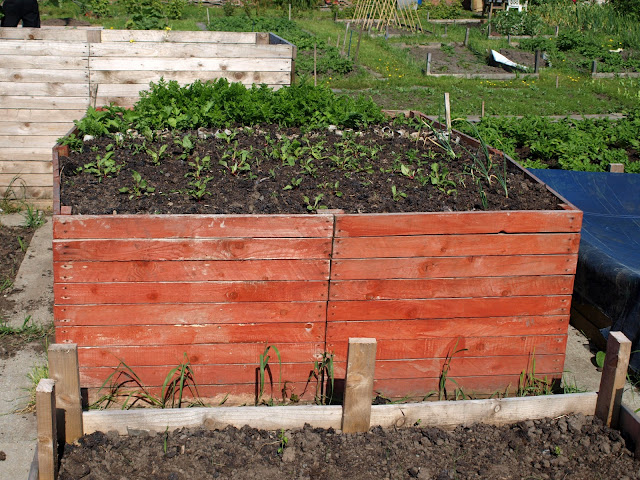 Good use of recycled materials has always been a primary characteristic of Allotmenteers - as is well demonstrated in the next photo. (Nice scarecrow leaning on the fence too.) 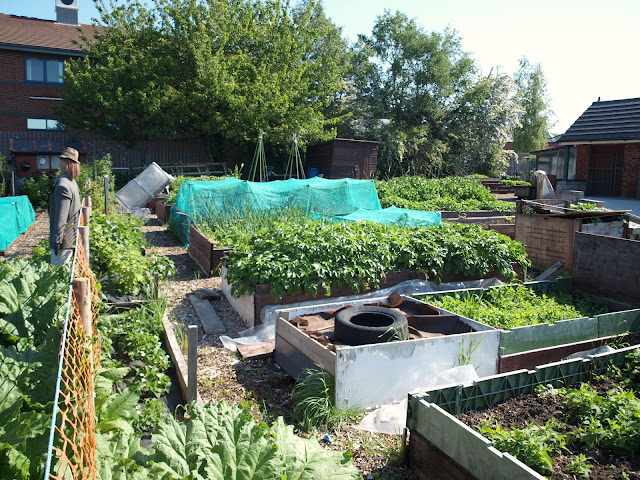 ﻿At the time of our visit, Jed was busy trimming his Leek seedlings ready for planting out, "topping and tailing" them with a pair of scissors. [Why a procedure like this is good, I know not, but that's what leek-growers have done for ages, and it evidently works.] He was also proudly showing me the place where he is about to plant four Marrows. Not many people are particularly enthusiastic about the culinary advantages of the Marrow, but Jed is obviously knowledgeable here, since he was waxing lyrical about the virtues of stuffed Marrow.

On a rather less attractive note, it was a bit depressing to hear from Jed about the instances of vandalism and theft that the Allotmenteers have had to endure, but then this seems to be a very common problem, judging by what many fellow bloggers write. Nevertheless, we both agreed that veg-growing has to be one of the most rewarding (and healthy) pastimes you could hope to participate in.

Thanks for the tour, Jed. I hope the Marrows produce some whoppers.
Posted by Mark Willis at 17:30 14 comments:

You all know how fascinated by Rhubarb I am! I am avidly following the growth of the flower stalk on one of my plants. It is now about 4 feet tall 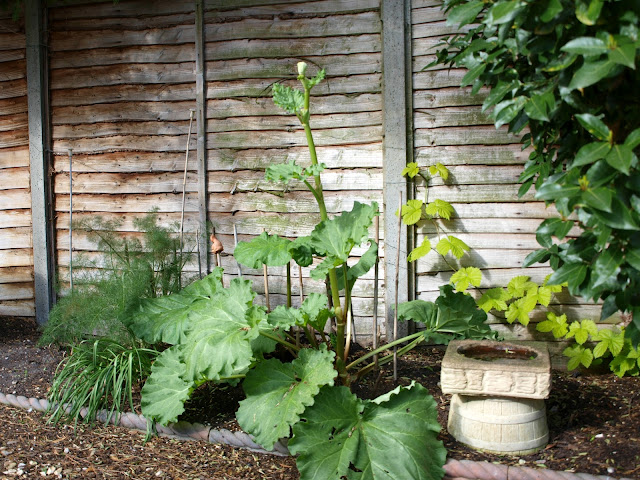 As you can see, I don't have a huge amount of Rhubarb (two crowns), so I have to squeeze the maximum value out of it - and that includes the photogenic potential of this flower stalk! I was tempted to remove it, as I have done in the past, but this year I thought it would be interesting to leave it to develop fully and see what the mature flower is like. 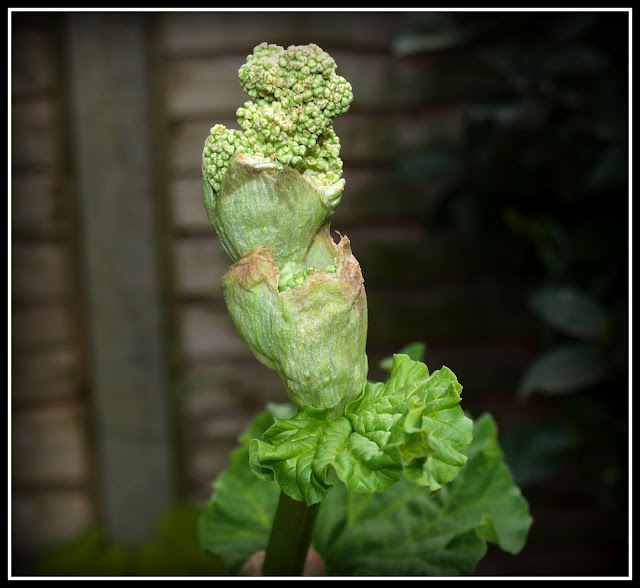 The flower stalk has a large number of tiny buds on it, which I think will eventually open out into cream-coloured flowers. It could turn out to be very attractive. 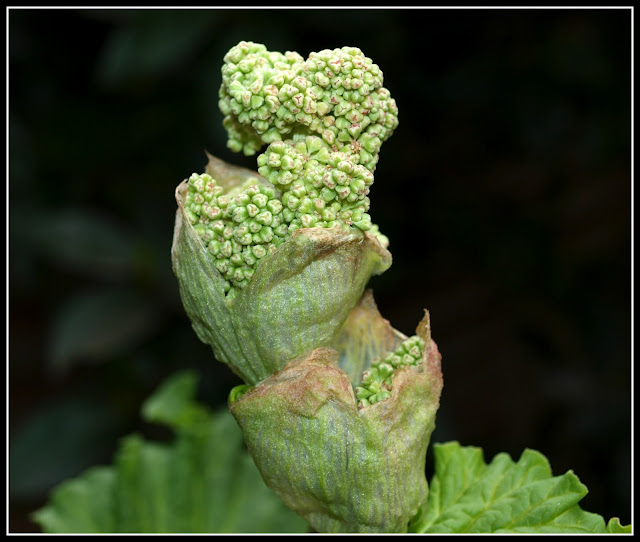 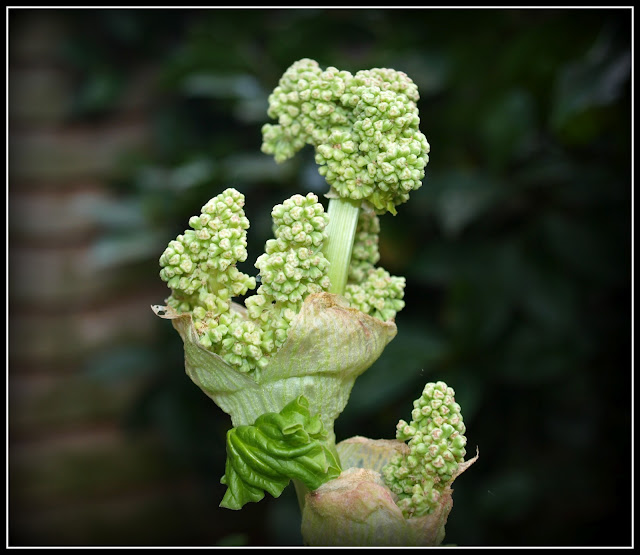 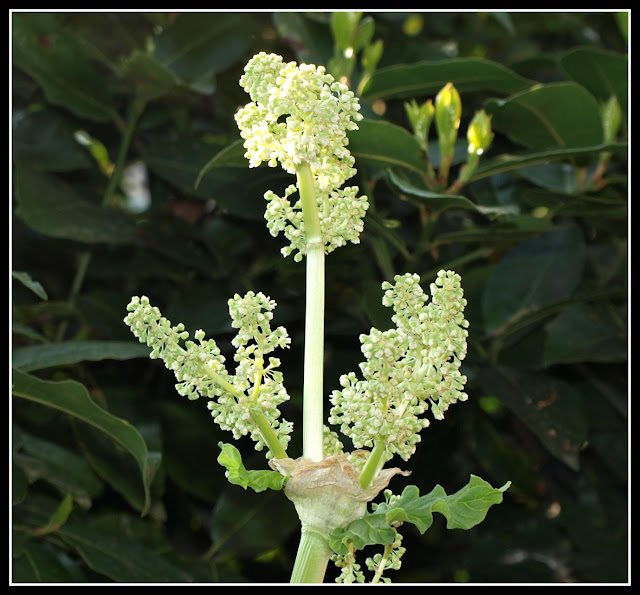 Birth of a Bean

Here are some close-up pictures of the early days of some beans:- 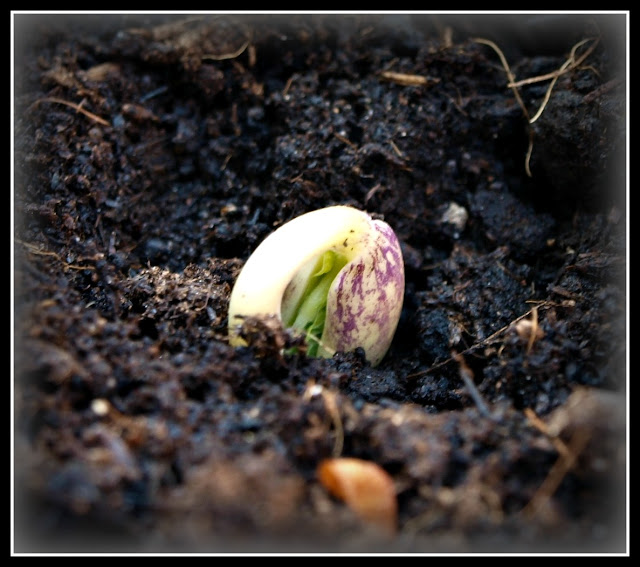 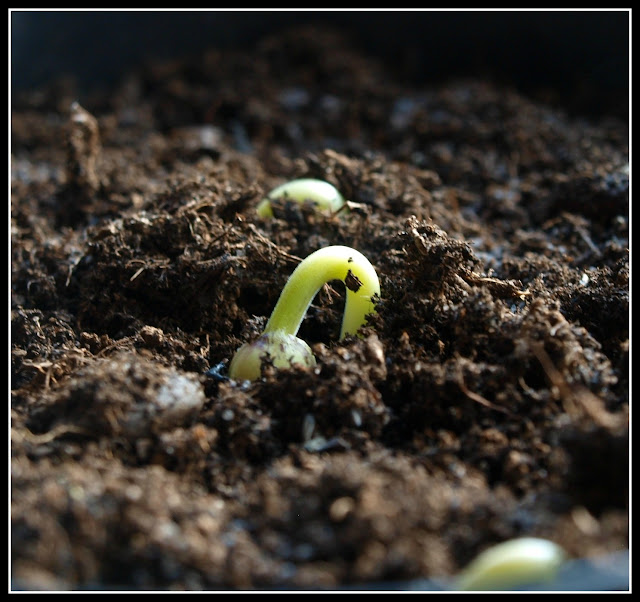 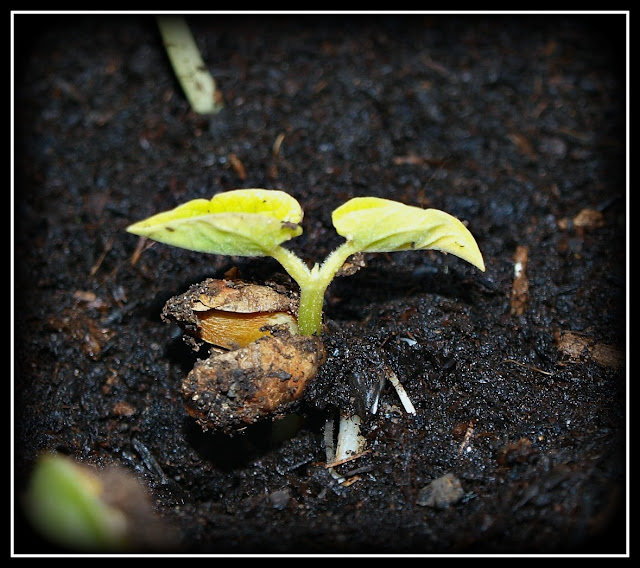 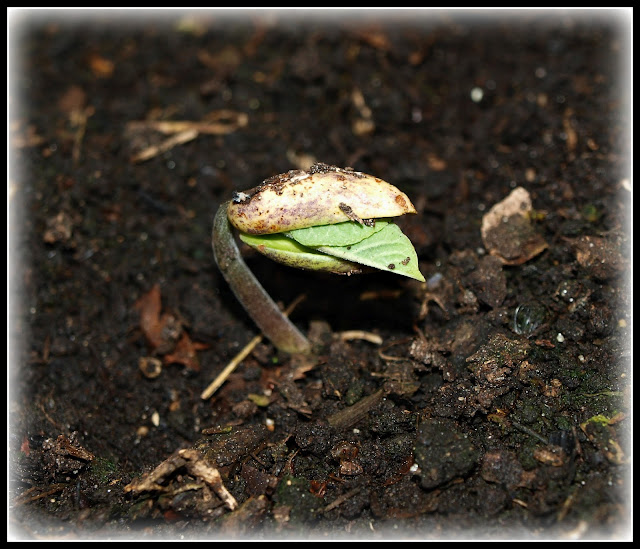 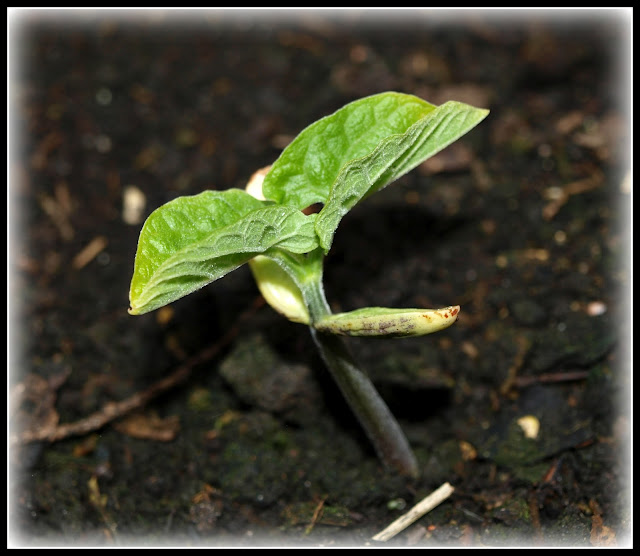 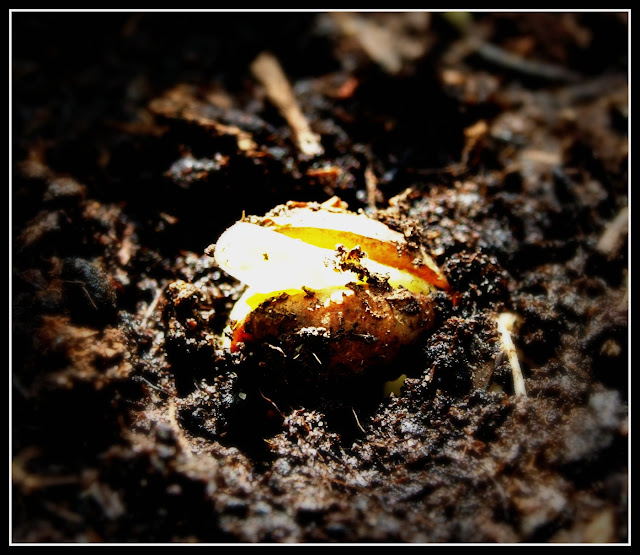 ﻿
Beans at this stage grow so rapidly, you can almost see them change within a few minutes - certainly overnight.

This is how my Broad Beans were looking last Thursday when I left home: 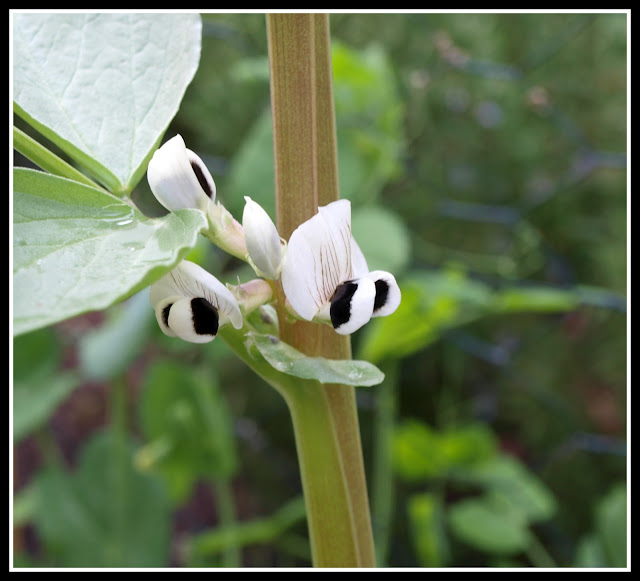 Maybe by now those flowers will have faded and given way to tiny little pods??? I hope so.
Posted by Mark Willis at 17:30 12 comments:

Ten days or so ago I published a post that was just a collection of photos, and it attracted some very complimentary comments, so I thought it would be good to give people more of what they like... See what you think of these:-


﻿Not much time for blogging at present - still condemned to "hard labour" at Mum's house! Making progress, but there's a lot to do. Sorry I have not had time to explore your blogs and contribute any comments. Hopefully I'll be back to the normal routine within a few days (though I expect my own garden will be in need of some TLC by now...)
Posted by Mark Willis at 17:30 6 comments:

As some of you will know, Jane and I are currently staying with her mother, assisting her to get settled back into her own home after a spell in hospital...

Well, you know me, I've been out in her garden already, with my camera at the ready. Her garden, though currently very negelected, has lots of nice plants in it. During our time here I will try to restore it to some semblance of order. With a bit of care and attention these could be really nice plants...

The most spectacular one is definitely not in my garden (yet!). I shall be taking a root cutting with me when we return home, that's for sure.

﻿Flowers are all very well, but what Jane's Mum really missed most during her spell in hospital was this: 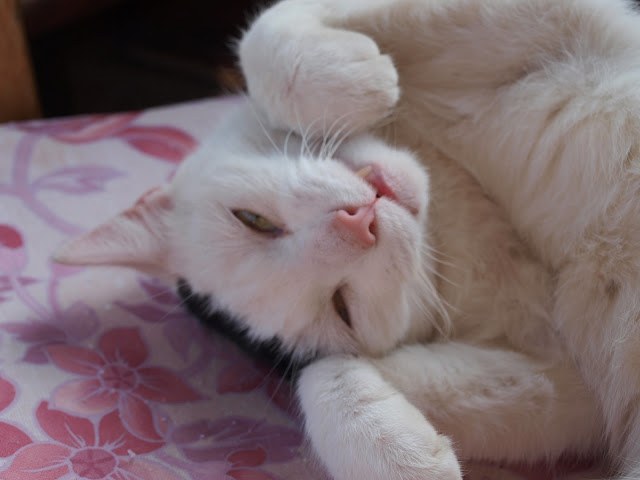 The funny thing is that this cat doesn't even belong to her. It is a neighbour's cat, but she feeds it (frequently), so unsurprisingly it comes to visit very often.

The internet connection here is SOOOO slow, it has taken me ages to get these photos loaded, so that's all the blogging I have patience for just now.
Posted by Mark Willis at 17:30 14 comments:

I can really believe that Summer is on the way now, because I have planted out my Runner Beans. 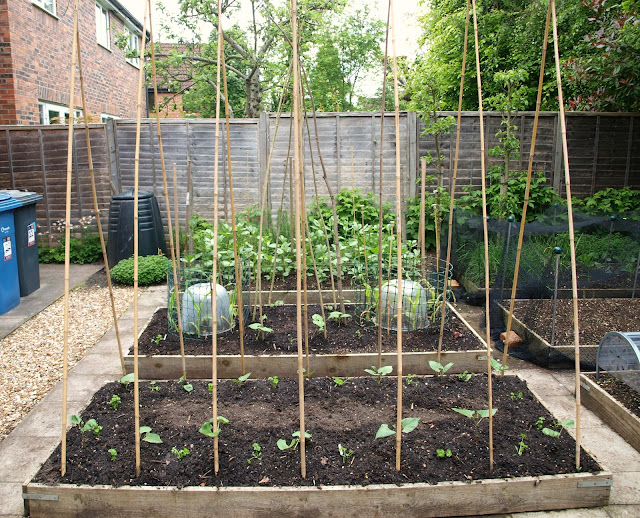 You can see that I have erected a support structure made from 8-foot bamboo canes. In that one raised bed I have used 14 canes in 7 pairs, and one more along the top to keep the whole thing rigid. Runner Beans grow very tall and produce a lot of foliage, which can get extremely heavy, so it is worth preparing some substantial support for them before they get big. I prefer to use bamboo canes because they have a fair degree of elasticity and will bend rather than snap, when subject to a heavy load. 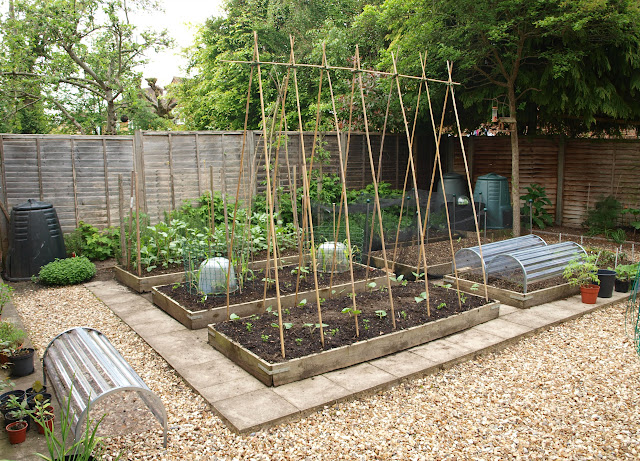 At the base of each cane I have planted one Runner Bean plant. Along one side there are 7 "Red Rum" and along the other there are 7 "Scarlet Empire". Both of these varieties have red flowers. This year I am being really restrained: usually I put two beans up each cane, but I think that sometimes "less is more" and a single bean with no competition may produce a better crop than two vying with each other for space, light and nutrients. 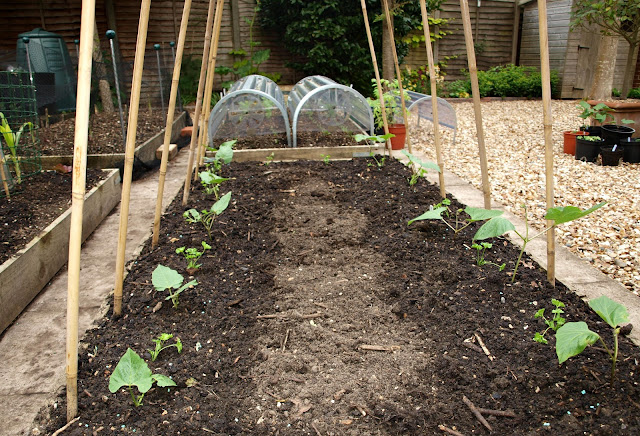 However... To make full use of the space I have put a couple of parsley plants in between each pair of canes. I now have 24 little clumps of Parsley, each with 2 or 3 plants. Maybe for once I'll have enough Parsley to keep our kitchen well supplied? 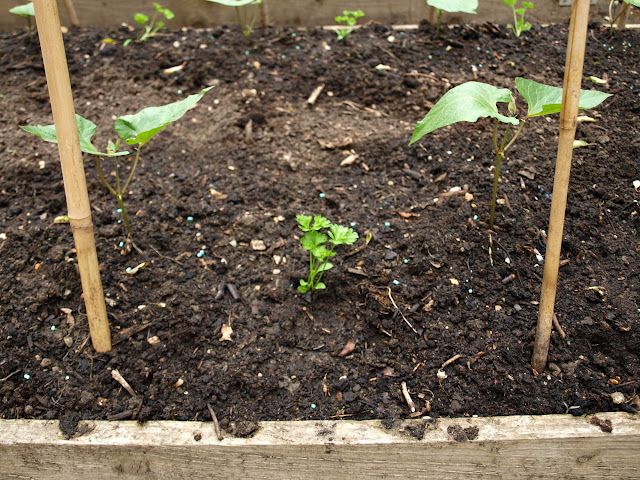 ﻿I know there is still a long way to go, but once I have got the beans in the ground I feel as if I have surmounted a significant psychological hurdle. I feel as if I've done my bit, and it's now up to Nature to do the rest! 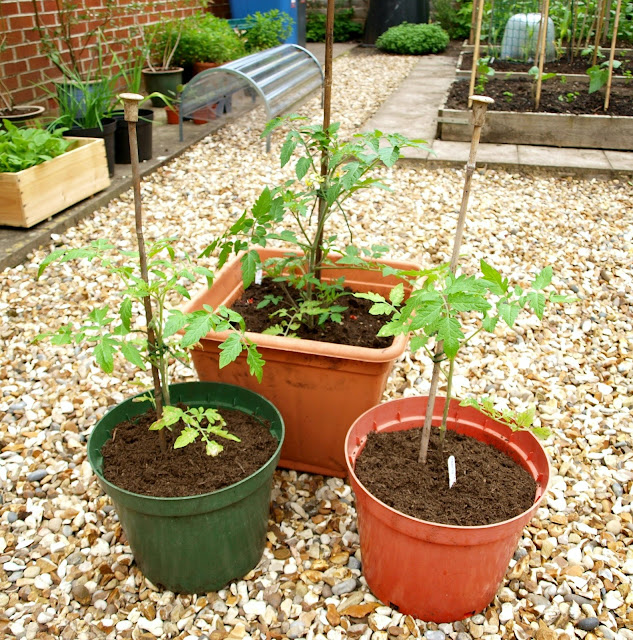 In order to release these I turfed-out rather prematurely some Daffodil bulbs that are now drying out in the garage, hopefully to be re-planted in the Autumn. The pots are not as big as I would like - you can see that they are considerably smaller than the square container behind - but they will probably be OK since Maskotka is a low-growing, bushy type.
Posted by Mark Willis at 17:30 9 comments: