Today we are "confined to barracks" by the snow. My planned trip to Edinburgh failed to materialise because my flight was cancelled - part of the major disruption at Heathrow airport, which I'm sure you all heard about.

In circumstances like this we did what any sensible people would do: spent the day cooking and eating! To be fair, most of the cookery was done by Jane (my turn will come at Dinner time: we're planning to have Mixed Game hotpot, with Spring Greens, which is very much in my department); my role during the morning session was to record the proceedings...

First on the agenda was a batch of Mince Pies. I'm not going to provide a recipe for this very well-known item. Suffice it to say that contrary to what its name suggests a Mince Pie does not these days contain any mince (as in "minced meat"), although in its original form it did. Apparently the spices used in these things were originally added to disguise the strong flavour of some rather rank meat remaining from animals that had been slaughtered a couple of months previously, at the beginning of Autumn! A modern Mince Pie is a sweet item - basically a pastry casing filled with "Mincemeat" which is made with suet, or vegetable shortening if you prefer, dried fruit and spices, usually moistened with brandy or another similar spirit. In Britain, the Mince Pie is traditionally eaten at Christmas-time, accompanied by Brandy Butter. 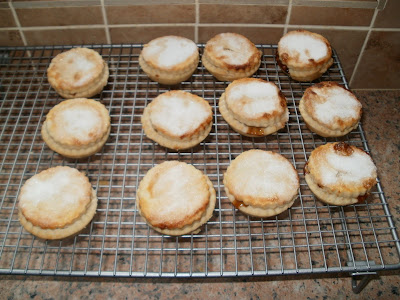 ﻿
After the Mince Pies were done, Jane made a batch of Palmiers.
The Palmier is made from puff pastry in a distinctive shape said to resemble palm leaves, or perhaps an elephant's ears. It is normally made as a sweet item, but can also be done as a savoury. On this occasion Jane decided to use some of our home-made pesto from the freezer to make savoury Pesto Palmiers. This technique works equally well with a filling of cinnamon & brown sugar; any type of jam; sundried tomato paste; tapenade; grated hard cheese; or even Marmite - pretty much anything you like really!
Stage 1. Roll out some puff pastry to form a long thin sheet. Spread the pesto over the pastry 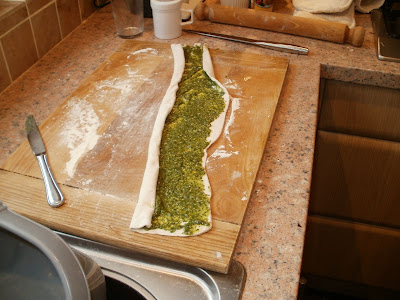 Stage 2. Roll up the pastry from both edges equally, to form a long thin sausage shape, and cut this into discs about 2cm thick and lay them flat on a baking sheet covered with silicon paper. 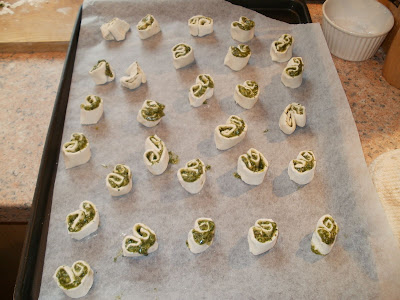 Stage 3. Bake at about 200C for about 15 mins (keep an eye on them to ensure they don't burn. They need to end up golden coloured, not dark brown). This is what the finished product looks like:- 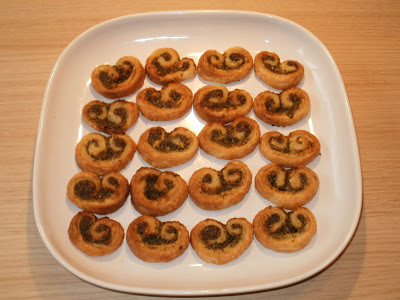 We had a few of these at lunchtime, served as croutons with a bowl of French Onion soup. It was a fabulous combination! [Note added the next day:- These Palmiers are also good with today's soup - Tomato!]
That's it for today folks, now dinner beckons...
Posted by Mark Willis at 16:00