In 2010 I grew a couple of plants of the outdoor cucumber variety "Marketmore", which produced a very good yield. I aim to do even better in 2011. 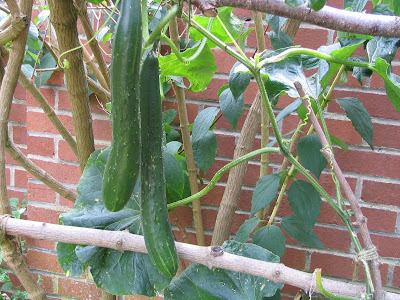 The 2010 cucumbers were grown in a redundant compost bin. It was one that I had made myself from scraps of timber, several years ago. Over the years it had become very dilapidated and the wood was rotten, so I ceased using it for making compost - and by this time I already had three plastic compost bins anyway. This is what it looked like 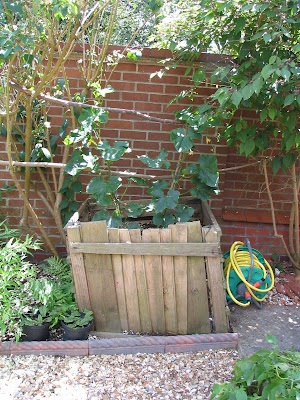 I decided recently to remove the old compost bin altogether and replace it with a rather more "scientific" arrangement for growing cucumbers. The plan is to have a couple of big containers that will provide a good depth of compost for the moisture-loving cucumber plants without relying on the poor, dry soil in the border. This way I will be able to provide completely new compost each year. There is also a secondary motive for removing the compost bin: I want to make enough room to plant a Buddleia bush, which will be not only decorative, but also good for attracting butterflies.

So today I removed the bin. First - off with the woodwork (a two-minute job with the aid of a large hammer!) 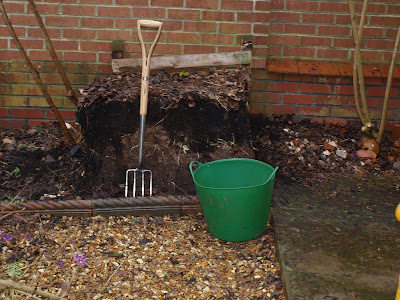 You can see that there was a nice depth of compost. However, apart from the top few inches it was very dry and crumbly, because the roots from the nearby shrubs had grown upwards into the rich compost, sucking out much of its moisture. I used my trusty Trug-tub to re-distribute the compost around the garden, as a mulch.

I also pruned VERY hard the overhanging Philadelphus (Mock Orange) shrub, which had got very gangly, and the Callicarpa bush. These two had provided the uprights for my cucumber-support frame, so I have left suitable branches to make this possible again. In due course I will construct a trellis of canes or branches, over which the cucumber vines will be able to climb. 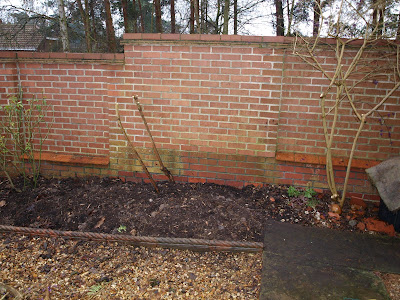 There we are then - job done. It's too early to think about planting cucumbers or Buddleias just yet, but when the time comes I'll have a head start. I must make a trip to the garden centre again soon, to identify some suitable containers...

Isn't it a shame that the brick wall you see in my pictures faces North? If it was South-facing, it would be a brilliant place to grow peaches or nectarines. Still, I love that wall because it gives me privacy, and makes my garden feel much more secluded.

While I was removing the bin today I had to re-locate a couple of plants. Some of them were Lemon Balm. They had some lovely purple-coloured roots and shoots:- 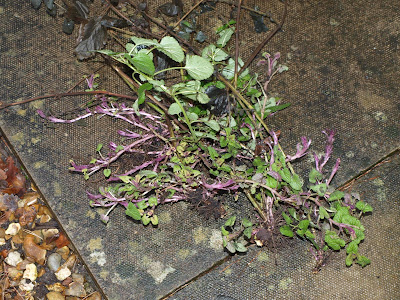 Lemon Balm self-seeds very freely, so even if these particular plants don't survive the trauma of re-location, I know I'll never be short of it in my garden.
Posted by Mark Willis at 17:30