This post, originally published on Monday 27 December, has recently been slightly adjusted in order to qualify for the Blog Carnival called How-To-Find-Great-Plants hosted by Eliza on Appalachianfeet ...


Regular followers of my blog will have seen that we have a bit of a family tradition in relation to our Boxing Day meal...for which a huge piece of ham like this 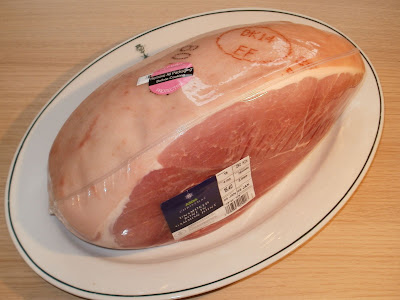 is converted into the ultimate object of gastronomic desirability, like this 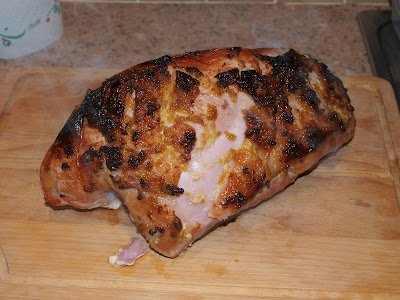 As it happens, it is not the ham that I want to write about today. I'm the gardener of the family, so I want to concentrate on my contribution to the proceedings - the parsnips.

Parsnips are vegetables that have had a bit of a bad press. For many people they fit into the same category as Brussels Sprouts - i.e. the least popular. In the UK, lots of people only eat Brussels Sprouts at Christmas time, and then only because they feel they ought to, not because they like them. Parsnips too are often envisaged as dull and tasteless - which they can be if kept for too long and cooked badly. But when you grow your own parsnips and eat them within hours of picking them (or a day or two at most), they will be a real treat. We like to eat them roasted. This way they are less likely to go flabby (as can happen if you boil them). If you drizzle the parsnips with some honey, brown sugar, or some maple syrup when you put them in to roast this will caramelise and make them even sweeter and more.....well, yummy.
﻿
﻿
On Christmas Eve the temperature was not quite as low as it had been for the previous few days and I managed to dig up some of my own parsnips. Their raised bed was still covered with snow, and the soil was frozen to a depth of a couple of inches, so I had to use my Border Fork to ease them out of the ground. This was not easy and regrettably I accidentally speared the biggest parsnip on the tines of the fork. No major harm done though - a slightly damaged parsnip will be OK if used within a couple of days.

So, I peeled the parsnips and smeared them with some goose fat left over from the previous day's turkey meal, and then drizzled them with a generous spoonful of runny honey 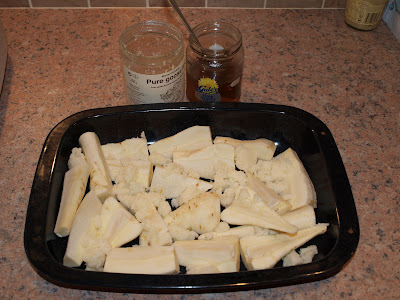 ﻿
When the meat was having the last stage of its cooking (at high temperature - about 200C - uncovered, to brown the fat) I put the parsnips in. They had I suppose a total of about 40 minutes' cooking time, but this is only an approximate figure. The cooking time will vary, influenced by the freshness of the veg and the size of the pieces of parsnip. You just have to keep an eye on them and judge when you think they are ready. Test them by poking them with a knife if you're unsure.

This is what they looked like when they were done. In case you think they look overdone, bear in mind that much of the colouration is in fact the honey, caramelised.


OK, so off they went to the table... Other accompaniments to our roast ham were Savoy Cabbage, boiled new potatoes, parsley sauce and Cumberland sauce - and a bottle of Rosé wine. A meal in the same league as our Christmas Day turkey meal I would say!

The gardeners amongst you may want to know what variety of parsnips mine were: they were "Cobham Improved Marrow" (what a lovely old-fashioned name!)
Posted by Mark Willis at 17:30