I despair of ever getting any Winter cabbages. In late July I sowed some seeds of the "Tundra" cabbage variety. When they germinated, I kept only the best ones, and potted-up eight, which I thought would be plenty for my small plot. Four seedlings eventually went into each of two of my raised beds.

﻿
﻿
Since then, these cabbages have been through a whole series of trials and tribulations: the young seedlings were attacked by slugs (one didn't survive); they were attacked by caterpillars (three were stripped down to little more than bare stalks); they were buried and squashed under several inches of snow (which broke off many of their leaves)...

The latest in the series of assaults they have had to endure is that of the foxes. This is not a one-off event. Over a period of several weeks, the foxes have attacked my fleece covers again and again in their eagerness to get at what lies inside. I have repeatedly done my best to repair the damage - replanting the dug-up cabbages (several times); patching the ever-deteriorating fleece with odd bits and pieces, trying to plug the holes. I've been fighting a losing battle. Sometimes it has just been a question of re-planting an uprooted cabbage or two... 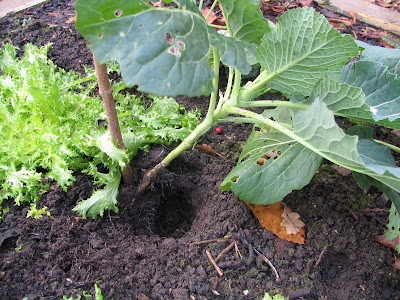 Other times it has been more serious. This is the scene that greeted me today:

﻿I was ready to lose heart. I actually dug up the remains of the four Tundra cabbages in this bed 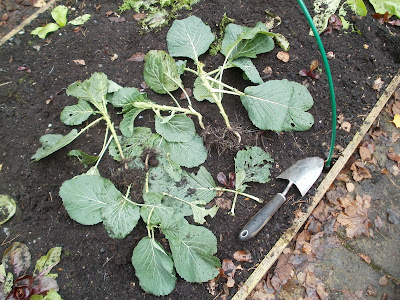 ...and put them in the compost bin. I then sat down, rather dispirited, to write this blogpost, and then I had second thoughts. Maybe, just maybe, those cabbages would survive one more re-planting if only I gave them a chance. The brassica family is a resilient bunch and I ought to let them have a try. So off I went to rescue the plants from the compost bin. I tidied them up as best I could and re-planted them again (very deeply). The fleece was completely beyond redemption, so I resorted to the netting I had used earlier in the year. This won't provide any protection from the weather, but I'm hoping it will keep the foxes off. Maybe at the weekend I'll be able to buy some more fleece (and put it on over the top of the netting?)

The three remaining Tundra in the other covered raised bed are looking marginally better, though with all the constant re-planting they have endured they haven't had much of a chance to form any heart! I may end up using their leaves as "Spring Greens" or simply as an ingredient in some soup... 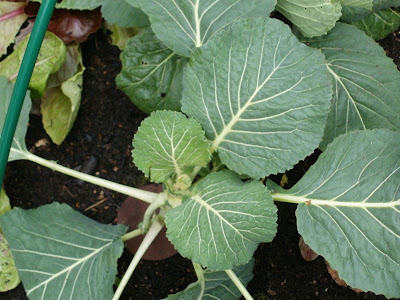 At least I haven't given up yet! We gardeners are a persistent breed.