Readers in the UK will be all too well aware of the fact that we have been experiencing a spell of abnormally low temperatures and heavy snowfalls. We are not used to this -- certainly not this early in the year. We usually get a few days of really cold weather once or twice each year, but normally in January or February, not November or December. When adverse weather is unusual it is hard to justify spending a lot of money on being prepared to cope with it, and this is our problem in the UK: cold conditions always give us a lot more problems than seems reasonable. After all, they cope with much worse conditions every year in Russia and Scandinavia and places like that.

﻿
This week I have had to travel to and from London three days in a row, and it has not been easy. I have to drive two miles to the railway station, get on a mainline train to London Waterloo, travel on two separate lines of the Tube (underground railway), and then walk the last half mile or so to the Training Centre where I have been working. In normal conditions, the journey takes me about 1 hour 45 minutes. This week it has been longer! Most of the trains have been running late, many have been cancelled, and the railway timetable has been in complete disarray. Every train that has run has been grossly overcrowded. The result for me is that I arrive home in the evening physically and mentally exhausted -- "frazzled", you might say.  In such circumstances it is a great relief to come home to a lovely hot meal cooked by for me by by wonderful wife Jane. This week's meals have been very much in the category "Comfort food". Not sophisticated, but hearty and sustaining.

This BBC Good Food Magazine book may have had an influence! 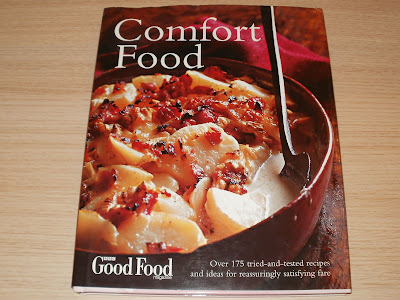 Sunday (appropriately, after returning from our trip to Golborne - originally in Lancashire, now in Greater Manchester) - Lancashire Hotpot, with beetroot and Savoy cabbage.

Monday - trip to our local Chinese restaurant "Wala Wala", for their so-called buffet, which simply means eat as much as you like, from a menu of about 60 dishes, for £15. We had 14 different dishes! One of our favourites is roast duck in steamed pancakes, with hoisin sauce, cucumber and spring onions.
Tuesday - roast chicken, roast potatoes, mashed Swede turnip, steamed leeks, and most importantly real gravy made from the juices in the roasting pan!
Wednesday - "Spag Bol" - pasta with meat sauce, and salad. The meat sauce was livened up with some of our home-made pesto from the freezer.
Thursday - Chilli con Carne (minced beef with red kidney beans and loads of tinned tomatoes) with brown rice and green beans (home-grown ones, from the freezer).

Friday - Cornish pasties, with brussels sprouts, and fresh (shop-bought) tomatoes, the whole garnished with onion marmalade. Jane makes her Cornish pasties from a recipe in the Cordon Bleu cookery series. The filling includes diced beef, onions, potatoes, swede and carrots, with plenty of salt and pepper. Here's a picture of the raw ingredients: 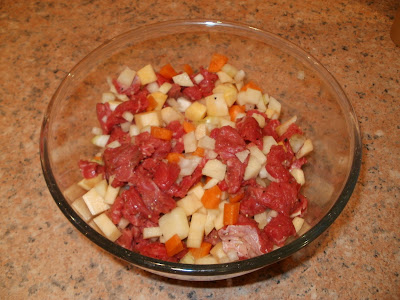 And here's a picture of the finished items: 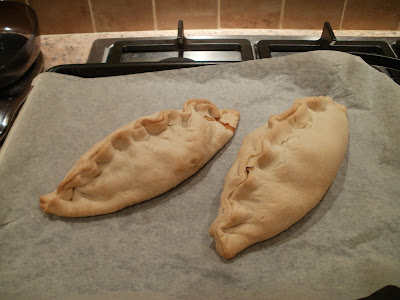 Saturday - roast pork, (with crackling, I hope!), apple sauce, roast potatoes, and a vegetable medley to use up the remainder of the veg we had earlier in the week, like cabbage, leeks and turnip.

Isn't it ironic that Jane (who comes from Lancashire) made the Cornish pasties, but I (who come from Cornwall) made the Lancashire hotpot? In our household Jane does most of the cooking (probably 6 days out of 7), though I do try to get involved with most meals, even if it is just prepping the veg. At weekends when I have more time I do like to cook something on my own, but my repertoire is fairly limited in comparison with Jane's. I claim the bragging rights on the casseroles though -- this is what I'm best at making. My "signature dish" is a pork casserole with tomatoes and cannellini beans, with lots of garlic and parsley. I serve it with taglietelli. That reminds me: I must make it -- we haven't had it for a while, and it would be perfect in current weather conditions...
Posted by Mark Willis at 17:30