Hi Everyone, and a Happy Christmas to you all! 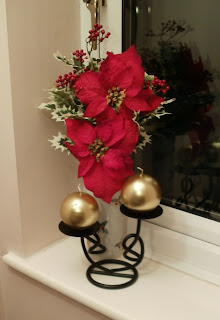 I'm publishing my "Christmas Special" post well in advance, because on Christmas Day itself I expect to be heavily engrossed with family festivities -- and eating & drinking of course! And all of you would be too busy to be browsing other people's blogs anyway...

Actually, some of you will have seen (most of) this post already... A few days ago I accidentally hit the PUBLISH POST button instead of the SAVE AS DRAFT button. Arrrrgggghhhh! I tried to withdraw it straight away, by changing the post's status back to DRAFT but the damage was done - it had escaped into cyberspace. Those of you who use Google Reader will therefore have been able to read the post in its entirety. Before you get all smug, I bet most of you have done this yourselves at some stage, or nearly done it, so don't you gloat!

I thought I would make the theme of my post a Review of 2010. A lot has happened for my family this year, for instance:-

1. I started my blog on 15 August. Initially I envisaged this being merely a means of showing friends and family what I had been up to -- mainly in terms of fruit and veg produced in the garden. It has turned out to be much more than this. It has given me a completely new interest (actually two interests, since you have to include not only blogging, but also photography, which I had never seriously indulged in before), and it has given me a wide circle of contacts and friends around the world. Some of these are now my constant "cyber-companions", with whom I interact more-or-less daily. I feel that I should mention a few of them (no offence meant to those not listed here)


and then again in a less formal, but bigger affair at Palenville, New York State, in June


3. Fiona and Juan moved to Geneva, where they acquired a flat with some balcony space for growing things - which ultimately led Fiona to write for me a famously successful guest blogpost entitled Balcony Composting   They also acquired a lovely, but mischievous, cat which they named Voltaire.


4. Lara, our first grandchild, daughter of Emma and Dave, ceased to be a baby and became independently mobile. Her first birthday coincided with Fiona's (June) wedding festivities, which Lara probably thought were laid on just for her. During the Summer she discovered Grandpa's tomatoes, and proceeded to devour them voraciously at all subsequent opportunities.

5. Emma, Dave and Lara moved to a new house (no picture available at present), where they are even closer to us - about 25 minutes' drive - so we are able to see more of them than we used to. Here's a Family Group showing them with Jane and myself.


Actually, there is another member of their household I must mention -- their cat Wallace. More mature than Voltaire, but no less cute!

6. Jane won a fabulous holiday for us to Vancouver, Canada, and another one to Turkey for herself and our long-time friend Rosemary.


Here's a view we don't often see -- the Gardener and the Chef both in the same picture (here exchanging some very knowing glances!)


And then there's this one... Me with Fiona's friend and Spanish-teacher Nacho (who was the official photographer at her wedding). By this stage of the proceedings, I think we were both VERY, VERY  drunk! What price the Blues Brothers, eh?

﻿Finally (I suppose I ought to end on a gardening note),  a picture of the thing that all this blogging is really about - Mark's Veg Plot. Here it is as I imagine it in my dreams - it's High Summer, and the garden is bursting with produce. Roll on Spring-time, I say, so that I can get sowing and planting once more.
Happy Christmas everyone, and best wishes for a successful and productive year in 2011.
Mark.
Posted by Mark Willis at 16:00