Some of you tried (unsuccessfully!) to identify the mystery object pictured in my post of 20th December. Thanks for having a go. I feel that the time has now come to reveal its true identity. 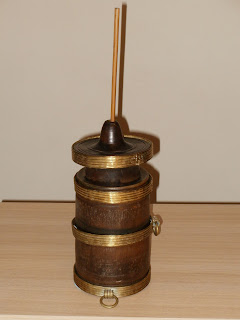 It is used for DRINKING millet beer

It comes from NEPAL

It is called a TONGBA

Actually, the alcoholic drink made from fermented millet, correctly known as "Jaand", has itself come to be called "Tongba", and I don't think I ever heard anyone use the word "Jaand". This is a bit like the way in which British people refer to beer as "a pint", after the vessel in which the beer is drunk.

The way it is used is basically this: a lump of fermented millet "mash" is placed in the wooden container and hot water is added. The lid is replaced and the assembly is left to stand for a few minutes. After this the liquid is sucked up through a hollow bamboo "straw" about 30cm long, inserted through a hole in the lid. You can see the bamboo straw in my picture. You can keep adding more hot water until all the alcohol (and taste) has been exhausted.

If you are interested in the whole business of making and consuming Tongba, a good place to start is Wikipedia. Here's the link Wikipedia - Tongba

The Tongba in my pictures is one that I bought many years ago when I was touring ("trekking") in Eastern Nepal, paying out pensions to retired Gurkha servicemen from the British Army. I tried drinking Tongba, and my opinion is that it is entirely appropriate in the hills of Nepal - very warming and relaxing after a hard day walking up and down mountains - but probably not something that would be hugely popular in Britain!

As you probably gathered, my Tongba is these days purely ornamental, though it was in active use the day I bought it.
Posted by Mark Willis at 22:30