A short while ago Jane won a bottle of Argan oil in a competition. Prior to this we had not been much aware of this product. It is quite expensive to buy in the UK - hence the fact that it was being offered as a competition prize - and you seldom see it in the shops. I suppose you could get it in an upmarket Deli, or perhaps in Fortnum & Mason or Harrods! 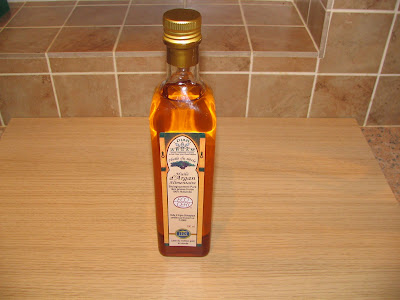 I did a bit of research on Argan oil and found that it is produced from the fruit of a tree that grows predominantly in Morocco. It is used for a variety of culinary, cosmetic and medicinal purposes. Truly a Wonder product! If you look closely at the label of our bottle you will see that it is billed as "Huile du siecle" (Oil of the century). [Double-click the photo to enlarge it]

Here's a link to the Wikipedia entry for it...

On one of my training courses recently I had a delegate whose family is from Morocco, and he told me that the Moroccan government subsidises the production of Argan trees, because they want to boost the export of the oil, which presumably is more or less unique to Morocco. He said (not sure if this is true...) that the government will give each person a free plot of land as long as they commit to growing Argan trees on it.

Wikipedia tells me that "For centuries before modern times, the Berbers (indigenous people of Morocco) of this area would collect undigested argan pits from the waste of goats which climb the trees to eat their fruit. The pits were then ground and pressed to make the nutty oil used in cooking and cosmetics. However, the oil used in cosmetic and culinary products available for sale today has most likely been harvested and processed with machines in a verifiably clean and sanitary way." Sounds interesting - a bit like that "Civet Cat" coffee that you can buy. 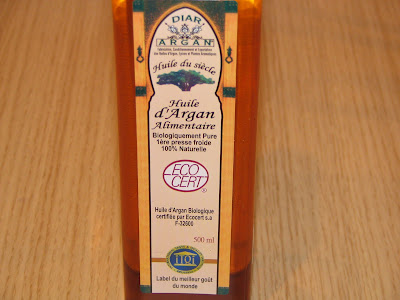 Anyway, we have used the oil for culinary purposes, not cosmetic. You can evidently use it in circumstances where you would use your best Extra Vigin olive oil -- i.e. perhaps in a salad dressing, but not just for frying!
It has a taste that is different to olive oil. Hard to describe, but definitely "Middle Eastern" rather than European. Does anyone else use this stuff, or know about it?
Posted by Mark Willis at 17:30