On Friday we indulged our hobby by visiting the BBC Good Food show at the National Exhibition Centre (NEC) in Birmingham. Jane had won the tickets in a competition run by Loseley, a well-known producer of premium dairy products http://www.loseley.com/  [One of the by-products of Jane's own business http://www.compersgrapevine.co.uk/ ]

This show is a twice-a-year opportunity for food and drink-related businesses to showcase their products and services to a huge audience. The Winter show this year ran from Wednesday 25 to Sunday 28 November. The NEC itself is a massive complex of halls capable of hosting even the biggest exhibitions. I don't know how many businesses were represented at this week's show, but it must have been many hundreds. As for visitor numbers, who can say? Certainly numbered in the tens of thousands over the 5 days of the show.

Regular readers will know that we planned ahead for attending this show, and we stayed overnight just a few miles away from the NEC so that we could arrive at the venue before it got too busy. Jane particularly wanted to have a few words with Kate Jenkins of Gower Cottage Brownies http://www.gowercottagebrownies.co.uk/ with whom she is friendly via email correspondence, though until Friday they had not met. Kate very kindly gave us some samples of her delicious brownies. Heavenly! 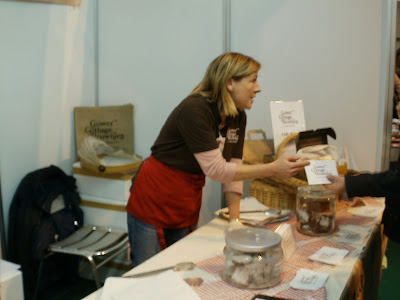 We stayed at the show about three hours (this was about as much as we could take, because it is actually quite physically demanding being on your feet most of that time and jostling your way through vast crowds of people). During this time we inspected hundreds of stalls selling all manner of goodies, and we sampled the wares of dozens of them. I lost count of the number of cheese samples we consumed! Actually the show had earlier hosted the 2010 World Cheese Awards, and the entries were on display in a separate part of the exhibition. I have never before seen so much cheese in one place. There must have been literally tons of it. 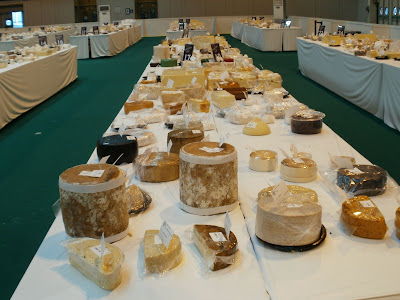 Being a veg gardener I was on the lookout for vegetable products. There was not much in the way of fresh veg on display, mainly because of the time of year, but there were still a few to be seen, such as this Veg-box delivery business. 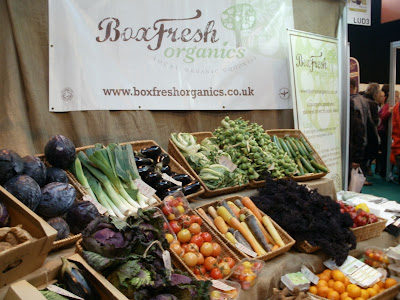 After cheese, I think the next most popular food item was the chilli 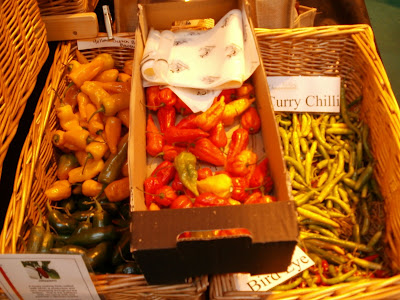 This stall selling Mediterranean foodstuffs caught my eye. They had fabulously-fragrant dried oregano still on the plant, rather than crushed into tubs. I love it like this, and it goes so well with a good olive oil. 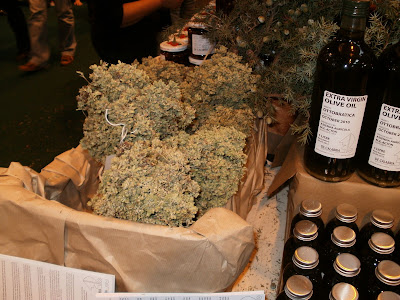 Naturally there were lots of chocolate products on offer... 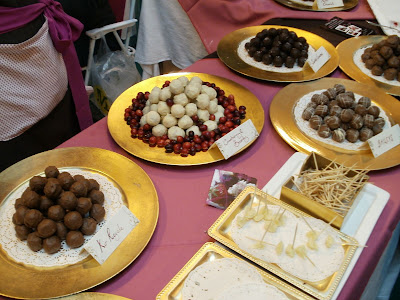 Since this show was taking place in the heart of England, you would expect there to be pies aplenty... 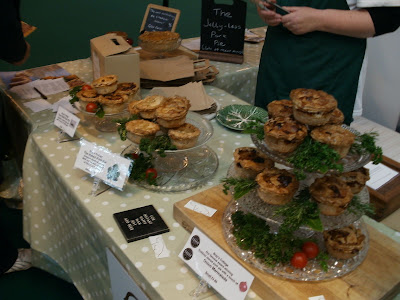 As a Cornishman, I was happy to see a few stalls selling pasties. This one was serving them hot. The smell was out of this world! [For those of you who do not know the Cornish pasty, it is a savoury pastry filled with beef, potato and Swede turnip - an unsophisticated product but, if done nicely, a real gastronomic treat.] 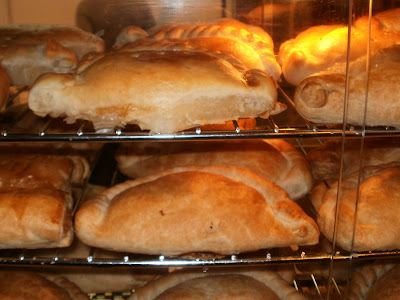 We bought a few things, most of which I cannot mention here because they are going to be surprises for certain people at Christmas, but I will admit that we did splash out on two new kitchen knives for ourselves. They are from Zwillings Henkel - pricey items, but worth every penny. One is a 15cm Cook's knife, and the other is a filleting knife. I'm sure they will get plenty of use very soon.
One other feature of this show that Jane appreciated more than most was the opportunity to enter loads of competitions. Many of the manufacuturers were running competitions to promote their products, so you never know, we might be lucky and win something. Our daughter Emma once won a fitted kitchen at this event!
All in all, a very interesting and rewarding day out!
Posted by Mark Willis at 17:30