For much of this week I have been away from home, for work purposes, and got home yesterday afternoon. Jane knew that I would have to negotiate a significant stretch of the M25 Motorway (The "London Orbital" -- sometimes referred to as the UK's biggest carpark), and the journey time would therefore be unpredictable. She decided to make for our dinner a Steak Pudding, which is a dish whose timings are not critical, and could easily be cooked or kept warm for another hour here and there without spoiling. As it happened, the M25 was uncharacteristically quiet, and I got home in near-record time!

Steak Pudding is another member of our "Comfort Food" repertoire -- a reassuringly satisfying dish admirably suited to our current Wintery conditions. 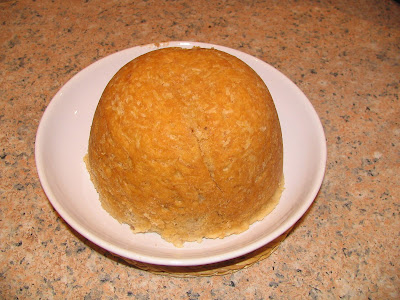 This is a dish that is made with succulent suet pastry, containing an unctuous mix of stewing steak and onions, encased in rich gravy. We like the pudding cooked in a steamer for about 4 or 5 hours, until the pastry is golden and relatively dry, though the dish is more normally served when it is still pale and moister.

Jane used meat from our local butcher for this pudding. It was a LOT nicer than the meat she used last time we had this dish (which came from the supermarket). We find that supermarket meat is often pretty tough and tasteless, and meat sourced from smaller outlets is almost invariably superior.

Here's a view of what the inside of the pudding looks like... 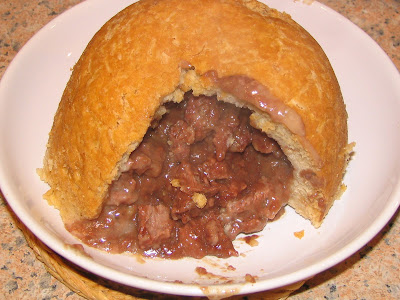 We normally serve this dish with traditional "old-fashioned" vegetables like boiled potatoes, carrots and Brussels sprouts. I wish I could claim the credit for growing these veg, but unfortunately I can't. 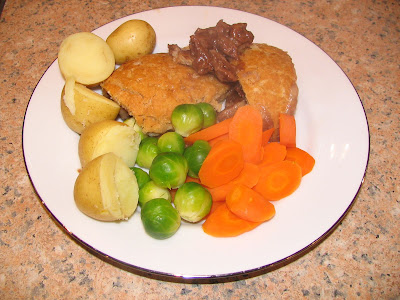 I would consider this to be good example of classic British food (except perhaps that many people would include kidney - which Jane and I both detest). Who in their right mind would want a take-away pizza when something like this is on offer???
Posted by Mark Willis at 17:30