Please can someone tell me what this bird is? I saw lots of them at the top of Blackcomb Mountain, near Whistler in Canada, whilst on holiday earlier this year... 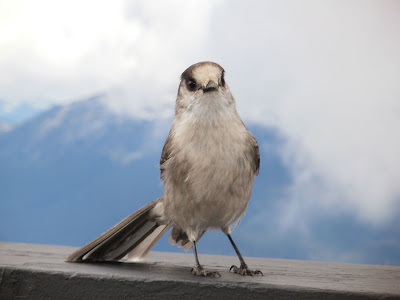 Actually, that was just a ploy to get us onto the subject of birds...

Today my garden has been teeming with birds. I don't know why there have been so many; it's not as if I have put out any new and particularly attractive food for them. Because I was conscious that there was a greater than normal amount of bird activity today, I decided to list the different varieties I spotted:

1. Robin  - very annoyed by the influx of interlopers to "his" territory
2. Blackbird - chirping furiously - also apparently considers my garden to be his
3. Thrush - looked panicky; evidently startled by the masses of other birds today
4. Bluetit - tiny and acrobatic, perching delicately on the flimsiest of twigs
5. Great Tit -  several of them - the most frequent visitors
6. Dunnock - shy and wary, flitting around mostly on the ground underneath the bushes
7. Collared Dove - a pair, as usual. They're a very devoted couple!
8. Goldfinch - a huge flock of these; maybe 20 at once, which is really unusual. Normally only see 1 or 2
9. Jay - a very wary and nervous visitor. Swoops in for a quick take-away morsel
10. Magpie - probably 4 or 5 - noisy and aggressive as ever
11. Wood Pigeon - dozens of them, as always (surprised they haven't attacked my cabbages - everything else has!)

Most of these were in the garden simultaneously, or within a very short period at about 0930!

Other birds I frequently see in my garden (but not today):-
Chaffinch - there are usually plenty of these around
Greenfinch - occasional visitors in Winter
Nuthatch - only see these three or four times a year
Green Woodpecker - more often heard than seen
Spotted Woodpecker
Wren
Starling
Jackdaw
Long-tailed Tit - usually arrives in a flock of maybe 10 or 12
Sparrow - not sure which type (probably House-Sparrow)
Posted by Mark Willis at 23:30