Very few of the peas I sowed out in one of my raised beds have germinated. 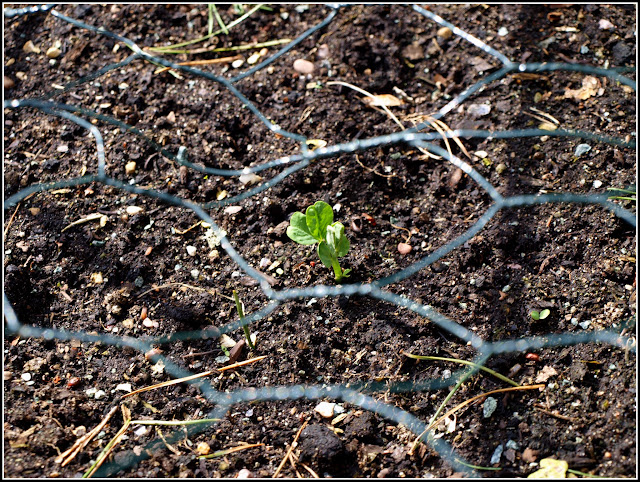 I think I was perhaps a bit optimistic sowing them in February, even though it was on the 26th. They probably rotted in the cold wet soil (Yes, I should have known better!). However, the ones I sowed in pots have done a lot better. One batch of "Early Onward" was transplanted into the same raised bed on 29th March, and is doing well in its new home. Some of the plants have grown so much that they are now beginning to cling onto the wire that I put over them as protection. 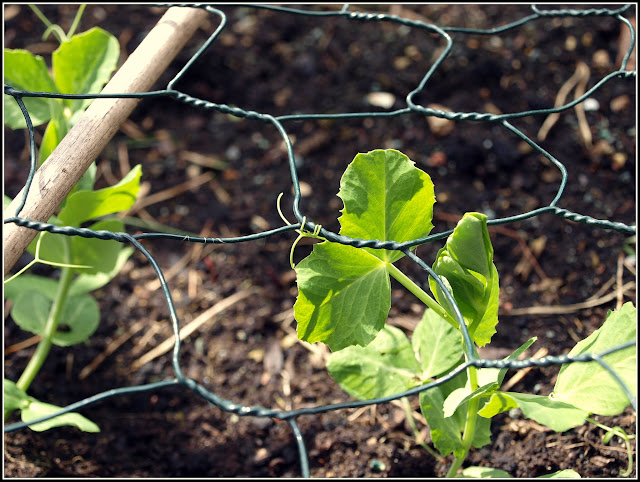 It's time to remove that wire and give the peas some support. 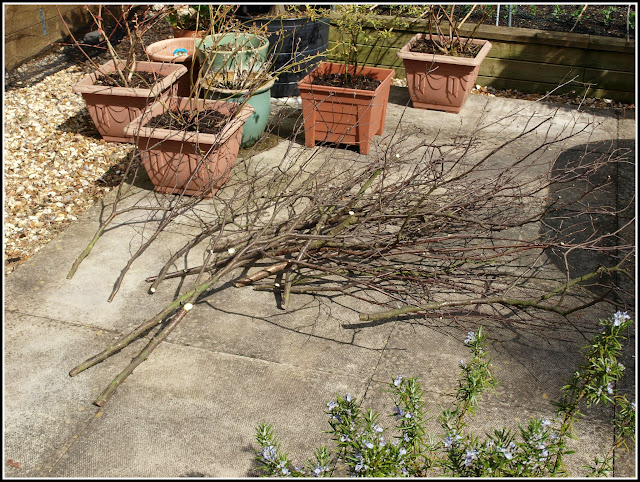 To some people that may look like just a pile of brushwood, but to me it's a bundle of peasticks. I "foraged" them from just across the road. Someone had dumped a pile of Beech branches (they definitely hadn't been blown off any nearby trees because there aren't any Beech trees in the immediate vicinity!) I felt that I was actually doing a good deed in removing some of the branches, and I have to say I'm disgusted that people consider it acceptable to dump garden waste in a public area. Well anyway, a bit of work with loppers and secateurs produced about a dozen twiggy branches (some straighter than others!), which I brought back into my garden. I removed the twigs from the lower parts of each branch, because this bit will get pushed into the soil. 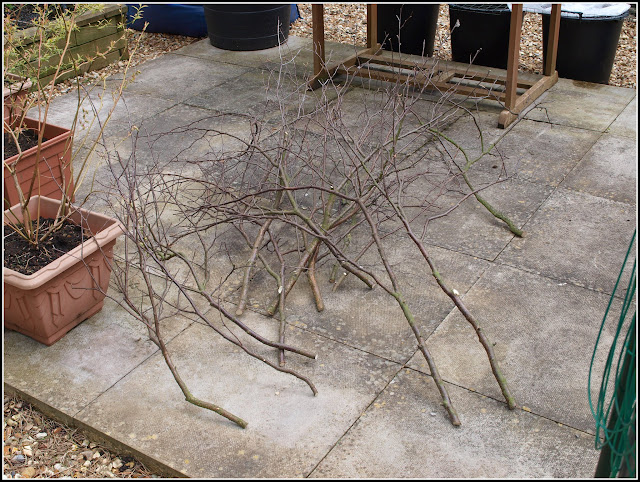 These are the peas that I planted out - some of the purple-podded "Desiree" and some of the ultra-sweet "Douce Provence". 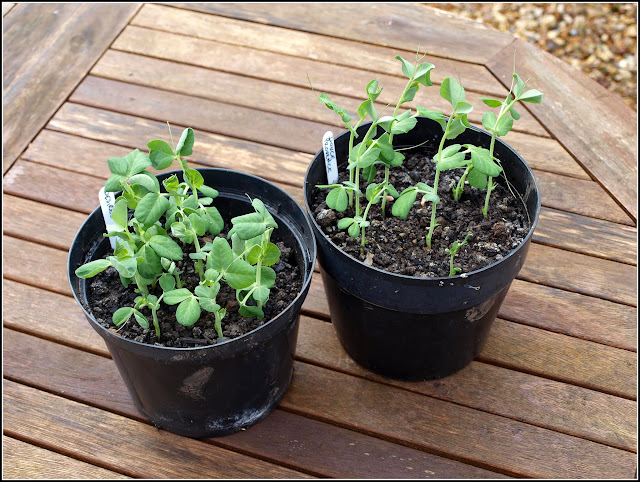 Digging very carefully, I put in 16 peas, spacing them about 6 inches apart. There were also four plants from my original sowing, so the row now has 20 plants. Here you can see the new row in the foreground, with the "Early Onward" ones I planted a couple of weeks ago in the background. 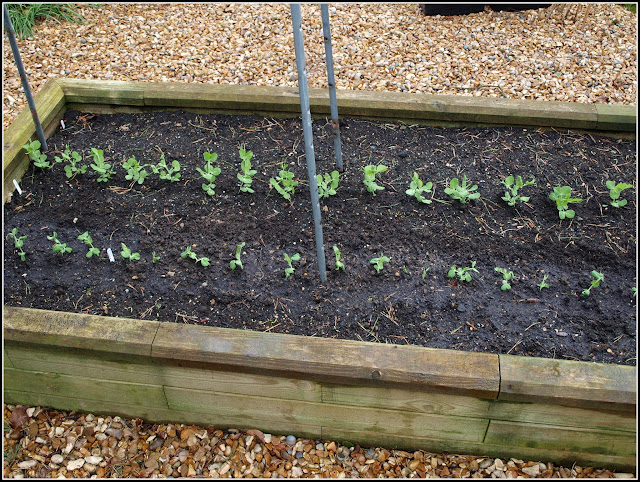 After planting the peas I watered them in to help settle them into the soil, and then pushed into the damp soil the above-mentioned pea-sticks: 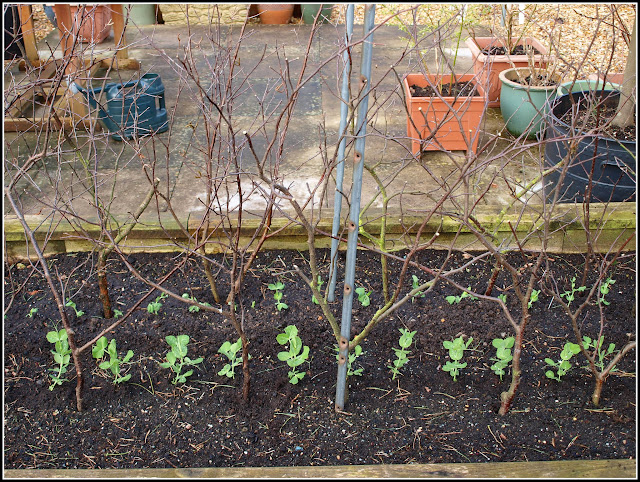 I want the sticks to be pretty steady, so I pushed them several inches into the soil. I was a bit worried that because of this they might not be tall enough, but I have subsequently looked up the typical height of the pea varieties I am growing, and the tallest one is 40 inches, so I think I'll be OK. 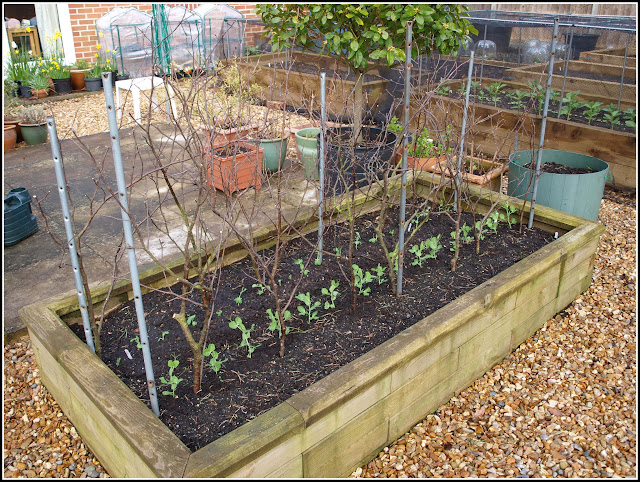 Alongside the peas there are some rows of Beetroot, which are just showing through: 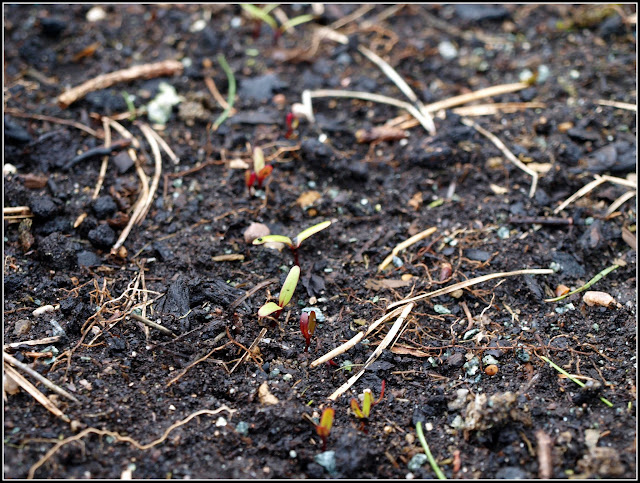 The two rows on the outside will probably be all right, but I optimistically sowed a row down the middle too, and I expect they will not do well, simply because they will not get as much light as they would like. Still, you never know... Maybe if I harvest them as Baby Beets before the pea plants get too big they will be all right? 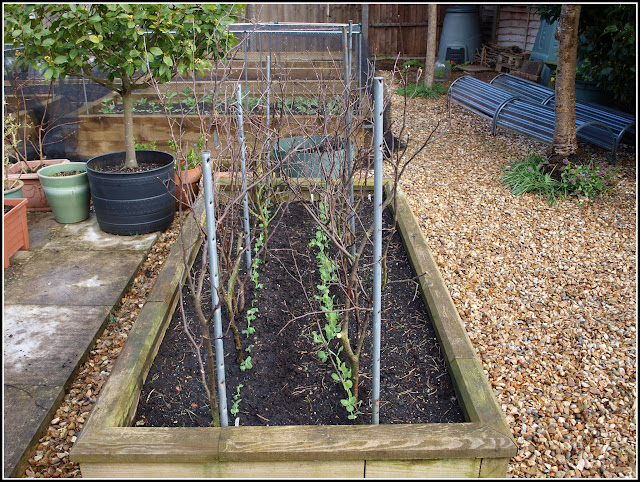 Right, so there we go: my peas are IN!


Just thought I would share with you a tip that my blogging friend David Velten suggested to me:- if mildew begins to appear on the peas plants, spray them with a mixture of milk and bicarbonate of soda. If this works, it might turn out to be my saviour, because in the past any peas I have grown have suffered a lot from mildew.