It's so easy to have too many Lettuces! When you buy a pack of seeds it normally has hundreds of seeds in it, and the temptation to sow them ALL may well be strong. However, unless you are a commercial grower you really don't need hundreds of Lettuces - certainly not at the same time. A better plan is to sow little and often (a technique called "successional sowing"). I usually try quite hard to follow this method, but I don't always succeed.


Look how many Lettuce seedlings there are in the seed-tray here:

Yes, far too many for my needs. So today I have been "pricking-out" a few of the best seedlings - putting them into separate pots. My technique involves easing the seedling out of the seed-tray with a piece of sharpened bamboo, and then gently dropping it into a hole made in the compost of the individual pot, prior to firming it in with my fingers. This one is a "Redin" seedling:

Notice that I have put a couple of slug-pellets in the pot as well. Young Lettuce seedlings are considered by slugs and snails to be a very desirable delicacy, and when I am only going to grow a few Lettuces I can't afford to lose any.

Immediately after pricking-out the little seedlings I give them a good drink of water and put them somewhere sheltered and out of direct sunlight for a while, which allows them to recover. When you uproot them like this they often go floppy because their roots temporarily stop picking up moisture (this is called "transplant shock"), but within a couple of hours they usually perk up again.


As well as the ones I pricked-out into pots, I also transplanted some slightly bigger Lettuce seedlings to their final growing-place in one of my raised beds. 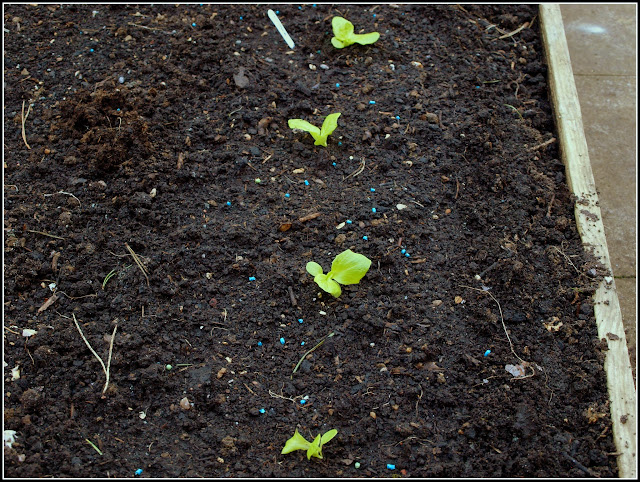 They are 4 specimens of a small Butterhead variety called "Tom Thumb". This is one kindly provided for me to try by Marshalls. Being a very small variety, it is one that will appeal to growers with little space available. 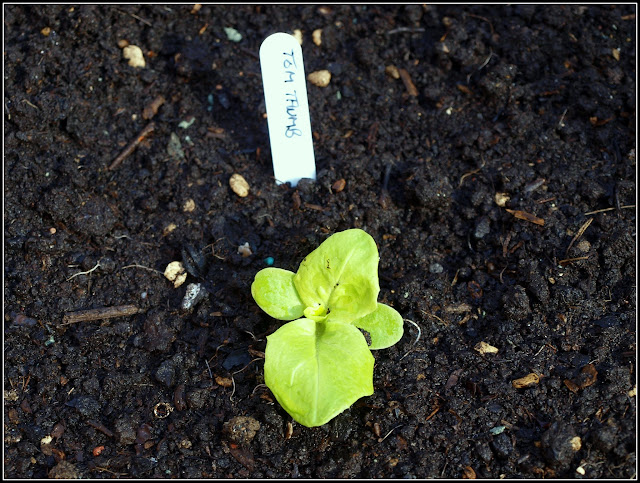 I have designated one of my beds as "The Salads Bed", and in it I have sown Radishes, Spring Onions, the "Daddy Salad" described a few days ago, and now these Lettuces. As the year progresses I will try to fit in a number of different salad crops, so that we always have something salad-ey available for harvesting until about October - or possibly beyond if the Endives and Radicchio perform better this year.


Waiting in the wings I also have these Lettuces too - a mix that includes some of the "Yugoslavian Red" sent to me by Elza in Holland. 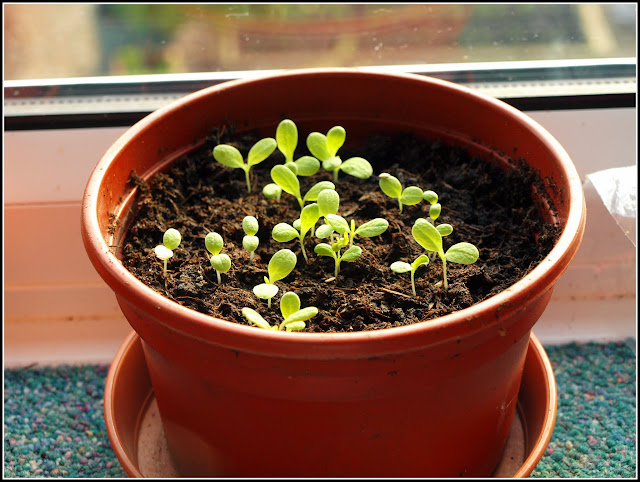 They are only very tiny at present, but that's just what I want - they fit very nicely into my "succession" plans.
Posted by Mark Willis at 12:00