Sorry if I'm boring you with more stuff about places in Kent! I'll be back to matters closer to home tomorrow...


Sissinghurst Castle is one of those places I have wanted to visit for years. It is one that everyone has heard of, and one that gets mentioned a lot in the Gardening community as a place that everyone should visit. As it happens (not a complete coincidence), the place where we stayed was only about 10 miles from Sissinghurst, so a visit there was a Must. Being so close, we were able to get there early on Sunday morning, before it got crowded. Actually, it was not crowded at all by most standards, and I'm sure that this was partly because the weather was again bloomin' 'orrible! The temperature that morning was 5C, under dramatically leaden skies: 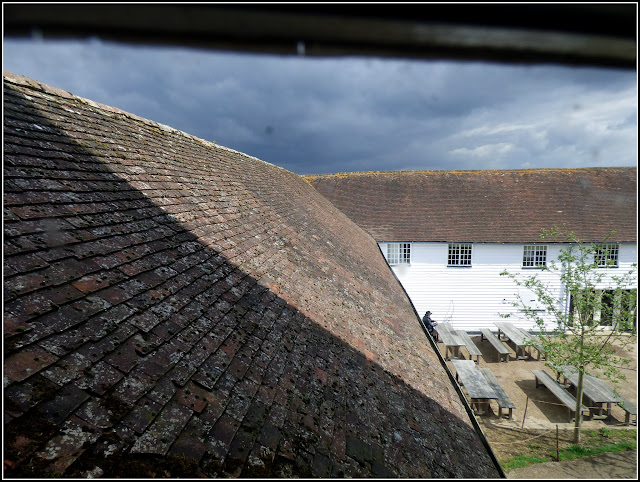 Sissinghurst is not really a castle any more. There was a castle there at one stage, but little of it remains. Mostly it is a very long low brick house, with all the attendant elements of a country estate - farmhouse, barns, stables, etc. (including Oast-houses of course!)


This barn was full of the chirping of little birds. I saw several nests up in the eaves - House Martins, I think.


At this time of year it is necessary to look pretty carefully at the gardens to appreciate their contents, because most of them are still dormant or only just beginning to grow, but I'm afraid that the weather was so cold that we didn't linger very long at any point. In the Summer it would be very different. In April it is Tulip time, and the Sissinghurst gardens were full of Tulips of every imaginable shape size and colour: 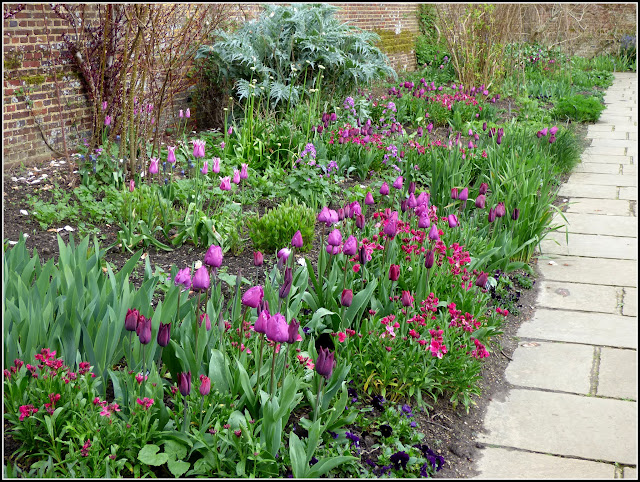 Under the archway of the main entrance was this little selection of perfect specimens of some very special Tulips: 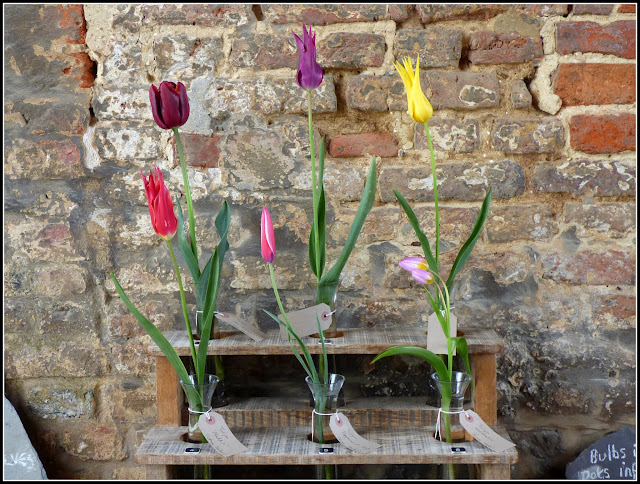 In normal (warmer) circumstances, we might have been tempted to go up to the viewing platform at the top of the tower, because this is where the best views of the gardens can be obtained, but we decided to leave that pleasure to some hardier souls... 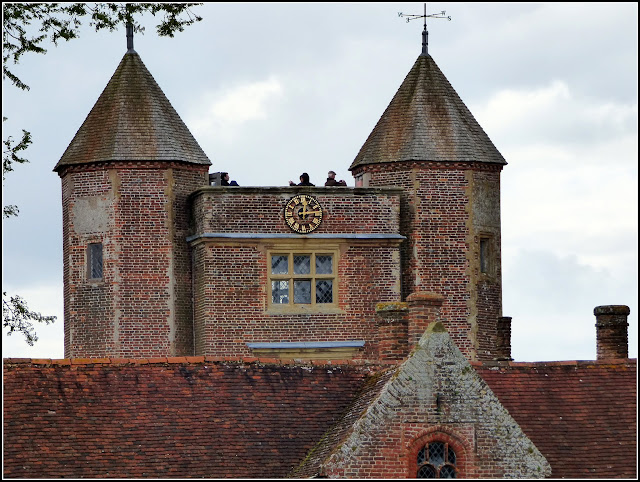 Perhaps the most notable feature of the Sissinghurst gardens is that although they are fairly big, they are divided into a number of smaller, more intimate "Garden Rooms", each with its own theme. This very beautiful Salmon-pink coloured Quince definitely grabbed my attention. 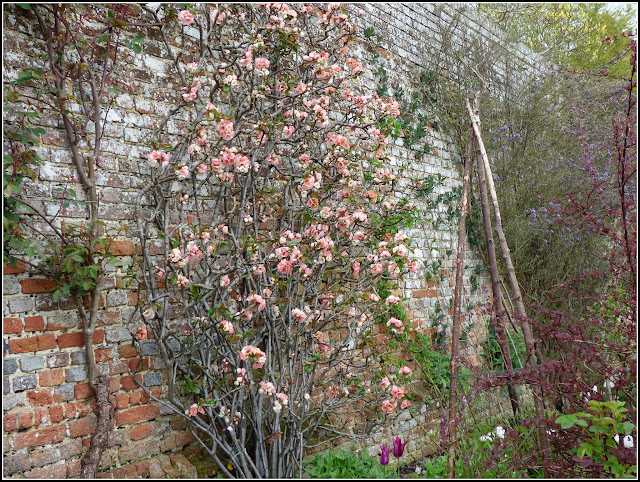 I also particularly liked the many huge containers full of bulbs, such this old lead water-trough. My photo is over-exposed and doesn't capture the white of those Narcissi properly, but there's no denying the dramatic effect that such a feature can contribute to a garden. 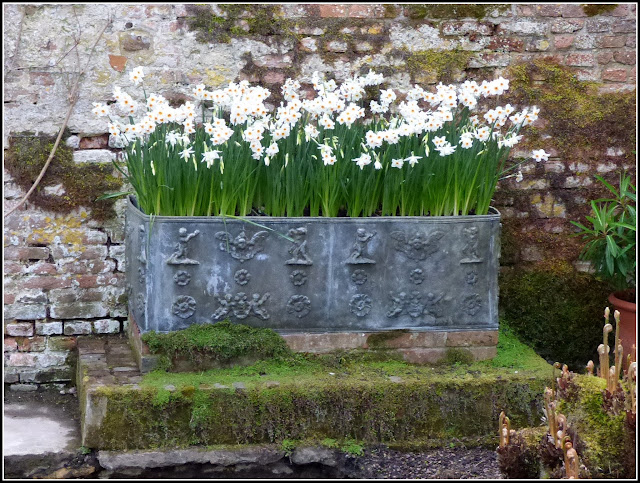 Having retreated to the shelter of the tearoom for a warming cup of tea, Jane decided to leave me to explore the vegetable garden on my own, an understandable decision.


I was very struck by the precision and orderliness of the veg-plot. Just like mine, but on a far grander scale, I thought! Look at these lovely neat rows of Garlic.

And a 50-metre row of Rhubarb! 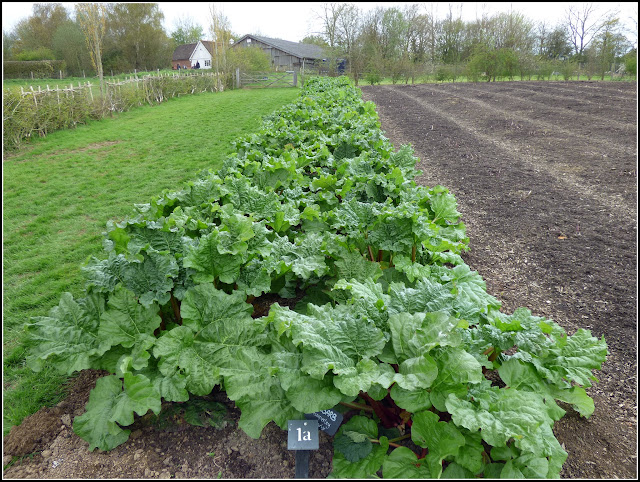 Signage informs the visitor that with the aid of 12,000 wheelbarrow-loads of "home-made" compost, the Sissinghurst veg garden produced 3300 kilograms of produce last year, most of which was used in the property's own restaurant. There was ample evidence to suggest the truth of this: 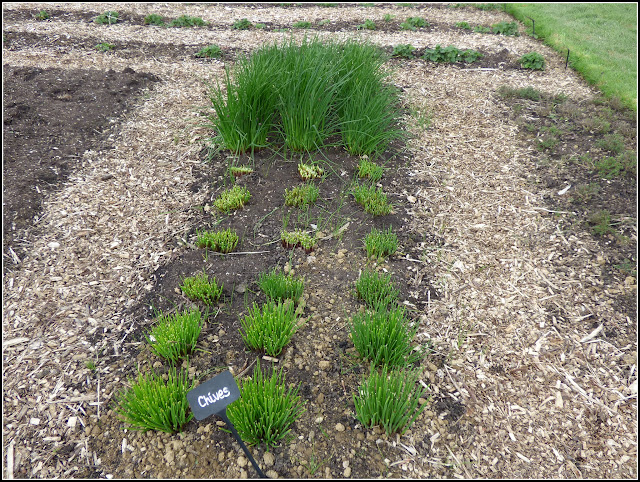 Most of the veg here is grown from seed and is therefore currently at a very early stage of its life, but this meant that there was plenty of opportunity for me to observe very clearly some of the plant-support methods being used, like the wooden poles here supporting strings up which pea plants are beginning to climb: 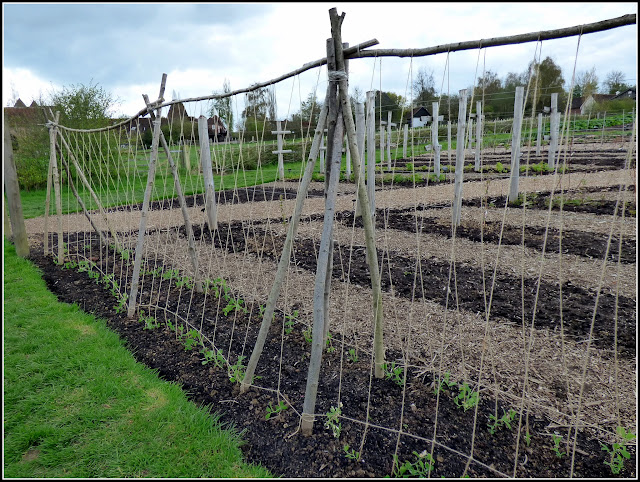 The shorter varieties of pea were supported by flexible Hazel pea-sticks and covered by netting to keep the birds off. 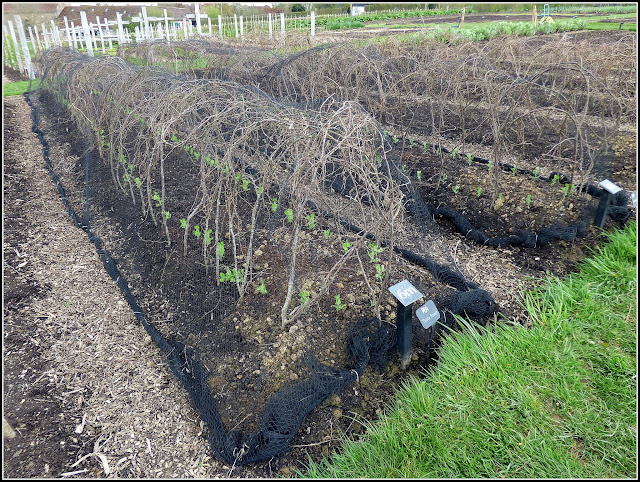 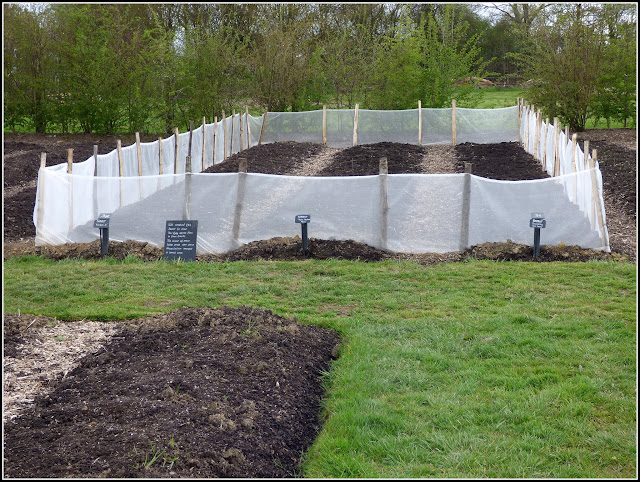 Right, now there is one more photo I want to show you. It is of a "flower arrangement" suspended from the ceiling in the exhibition centre that gives people information about Vita Sackville-West, the founder of the garden in its current form: 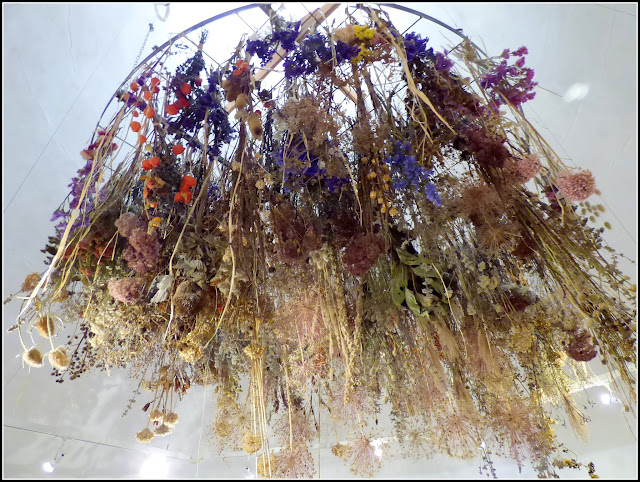 
My verdict on Sissinghurst: very nice indeed, but I want to see it again, in the Summer-time.
Posted by Mark Willis at 12:00