April is without a doubt the busiest month of the year for getting new plants started. Almost every day I sow something - Lettuce, Beans, Leeks, Radish, Beetroot etc - even some flowers (Calendula).


These are some Lettuces I sowed the other day. I sowed a small quantity of 5 different varieties, but look how uneven the germination rates have been! 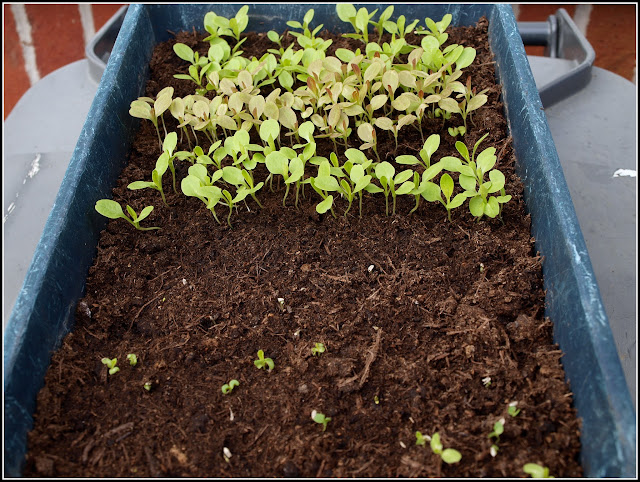 The ones nearest the camera are "Cervanek" and behind them are "Devin", both from packets that are now two years old. I suppose that clearly makes the point that using old seeds may not be such a good idea. Behind them are "Little Gem", "Redin" and "Dubacek", all of which have germinated well. The "Little Gem" is from last year, and the other two are from new packs. Despite the poor germination of "Cervanek" and "Devin", I'm not panicking because I really only need about three of each type! My plan is to sow a new batch every couple of weeks and keep just a few from each, so that I have lettuces maturing in succession throughout the Summer rather than a glut of them all at one time.


This is one of my batches of Leeks (They are "Toledo"). 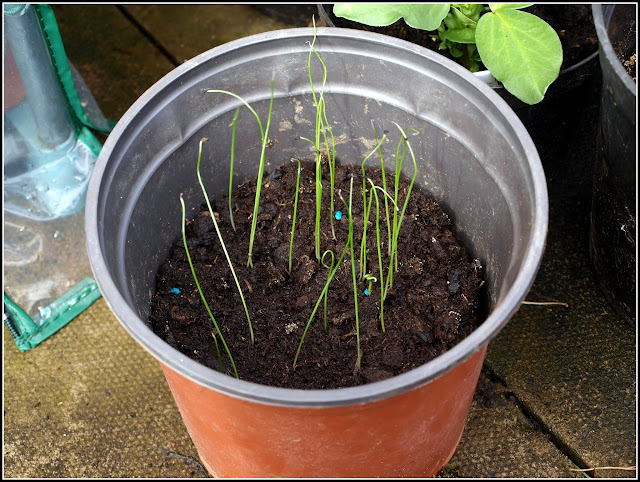 There are about 20 or so plants in that pot, which will be more than enough for my requirements, especially as I also have another pot ("Apollo" this time) at about the same stage, and one of "Winter Giant" which I only sowed a few days ago - successional sowing again.


My Broad Beans are all up and running now, but I can't bear to part with the spares (I have a few of each type, just in case of casualties) - they look such perfect, healthy specimens. I think I'll hang onto them for another week or two and if they are not required during that time I'll give them away. 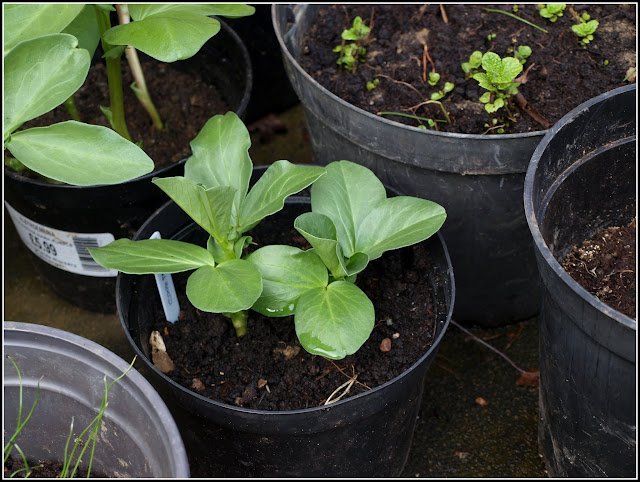 Earlier this week I bought two Thyme plants from my local Morrisons supermarket. They were in the ornamental plants section, but of course in my garden they are going to be treated as culinary herbs, not ornamentals. Here they are, planted out in front of some Parsley which is currently protected by plastic bell-cloches. 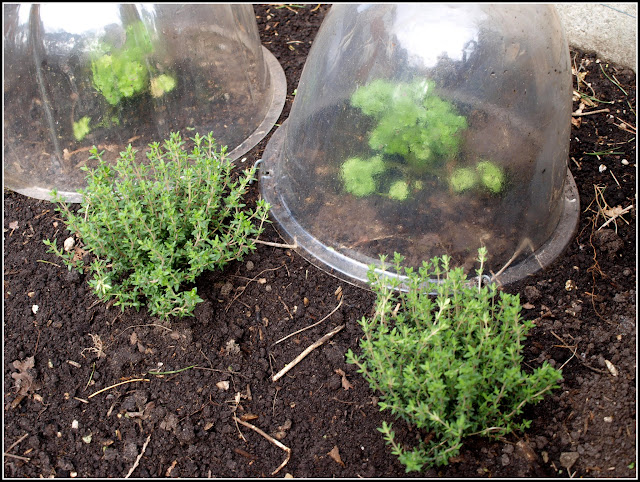 They are nice specimens. My only complaint is that they are twice the price of a similar pair I bought from the same source last year. That's "zero inflation" for you! 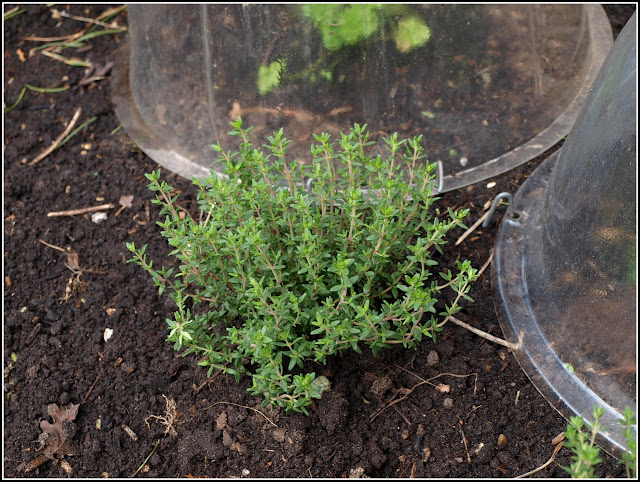 My chilli and tomato plants are now into the regular April routine: out into the mini-greenhouses at about 0900, to get as much light as possible (whilst being protected from the wind), and then back indoors at about 1800. Every one of my tomatoes germinated, but some of the chillis have not appeared. This may be because some of the seeds are old and have lost their viability (ones received from friends are seldom dated), but it might just be because they are not happy with their conditions. I don't have a heated propagator and it may be that the airing-cupboard isn't hot enough for them. I know that some of the Capsicum Chinense varieties like temperatures in excess of 25C for germination - which may be why I have not had much luck with the Habanero varieties. [heated propagator is on my official wishlist now...]


This is one of only two of the Panama chillis which have germinated so far: 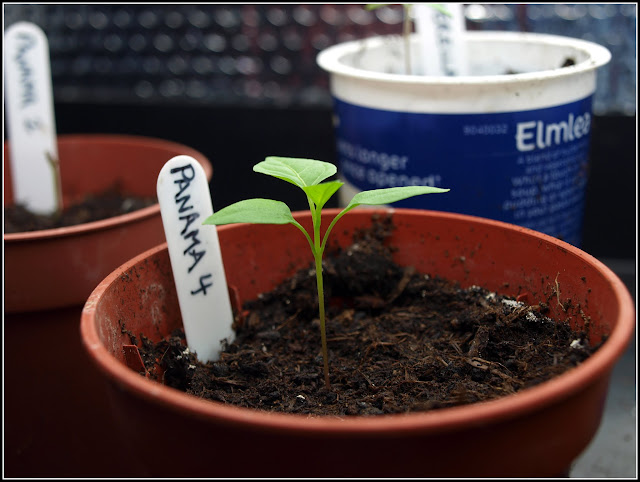 This is the other. Unfortunately it came up "with its helmet on", and in trying to remove said helmet I damaged the seedling beyond redemption! I have subsequently re-sown... 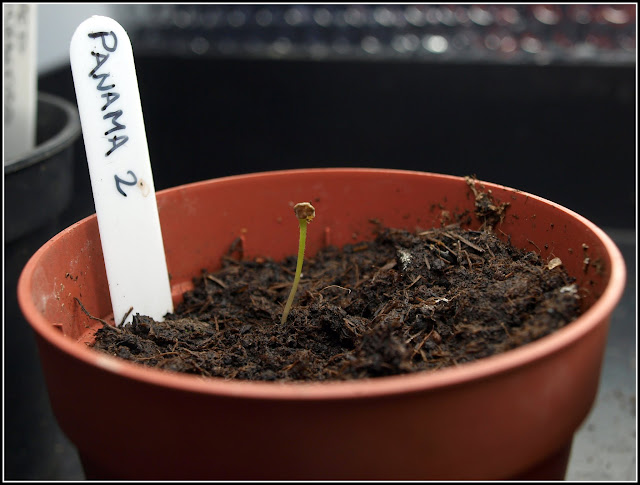 You remember that some of my early peas, sown in pots in the mini-greenhouses, rotted before germination? Well, their replacements (indoors from the start) are looking a lot better! 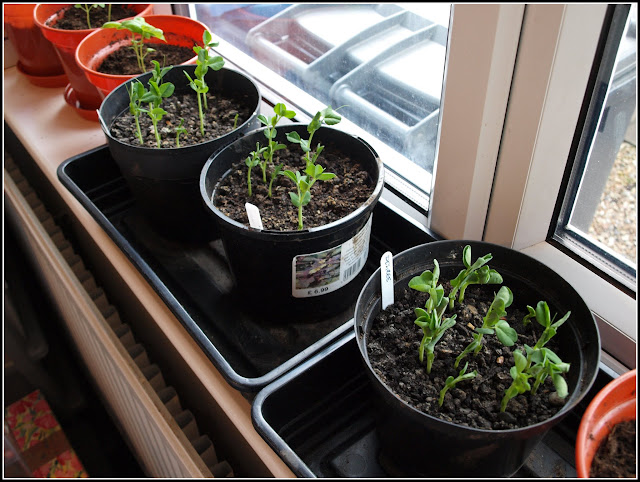 The "Desiree" (purple-podded) ones in the nearest pot are best - 14 germinations out of 16 sown, and the other 2 may yet appear. These ones, by the way, are a gift from a new-found friend in Holland (Thank you, Elza!). 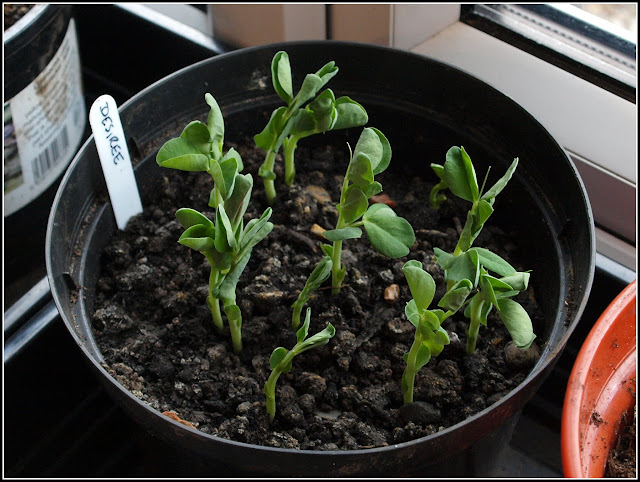 The last planting I want to mention today - just for the record, because there is nothing to see - is the last of the potatoes. I planted four "Pink Fir Apple" tubers. This time they got a pot each rather than sharing, because their pots are smaller than the 35-litre ones I have used for the other potatoes. At present I have them under cover in the garage. By the time their shoots peep up above the compost (probably about the end of April) it will hopefully be warm enough to put them outside without much risk of frost damage.
Posted by Mark Willis at 12:00