This year I am growing two varieties of Parsnip - "Duchess" and "Tender and True". I very seldom grow only one variety of any crop, simply because I like to hedge my bets. Sometimes one variety will do very well whilst another is poor. I thought until a day or two ago that this would be the situation this year with my Parsnips. I sowed them both on March 18th, which was a warmish, still day, so I was able to sow the seeds very precisely. If you know what Parsnip seeds look like you will know what I mean when I say that it is best to sow them on a still day. They have "sails" which are intended to help them spread far and wide, and this they do very effectively, if you let them!


Parsnips seeds often take a fair while to germinate (three weeks is about normal), but after a month had passed with no sign of any Parsnips appearing I was beginning to get worried. There comes that stage when you begin to contemplate re-sowing... However, early last week the "Tender and True" Parsnips appeared very suddenly, almost all of them simultaneously: 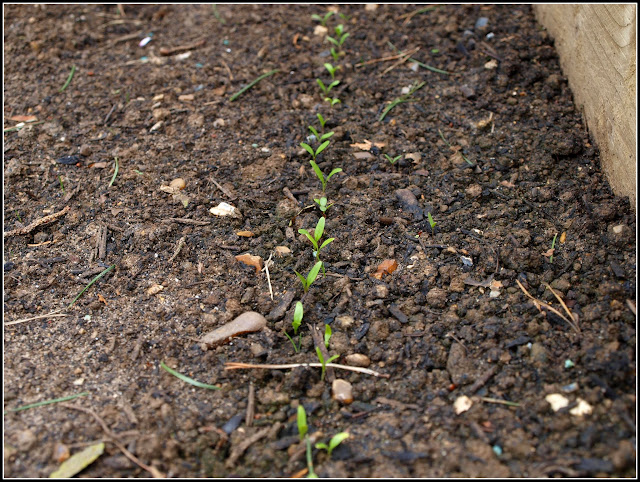 I am very pleased with the germination rate. It looks like more than 90%. This is a sure sign of fresh seeds. Parsnip seeds lose their viability very quickly, and although I have occasionally taken a chance and sown seeds from a part-used pack from the year before, it is usually best to sow seeds from a new pack - ones that will have been harvested the previous year.


The "Duchess" seeds were slower to germinate. In fact I was beginning to worry that they might be a complete washout. Every day I would scan the raised bed very carefully for any signs of life (usually several times a day!) Luckily, ten days after the appearance of the other variety, I can now see a few of the "Duchess" ones peeping through. You have to look very closely, but they are definitely there: 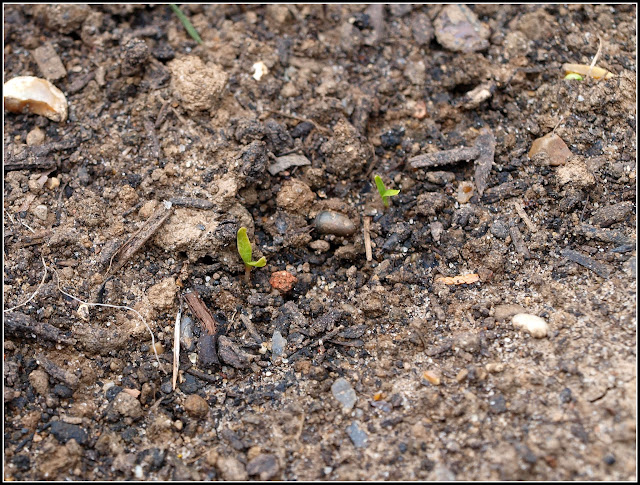 I think perhaps one of the reasons why the Parsnips have taken a long time to come through is that the soil in their bed had formed a "hard cap". The bed is one of the new ones I built a couple of months ago, and it contains a high proportion of that Norfolk loam I bought. Whilst the loam is good in some respects (for instance it's weed-free and stone-free), it does pack down very densely. It is going to need quite a lot of organic matter added to it. Germinating seeds may find it hard to penetrate the hard crust that forms on the top of the soil, where it meets the air. Now that I am aware of this I am taking care to water seed-drills very frequently in order to soften the soil. Over the next few days I expect lots more of the Parsnips to show through.


Although I sowed the Parsnips pretty densely, once the seedlings get a bit bigger I will be thinning them out to leave space for the roots to swell. I normally allow about 3 or 4 inches between plants. If they are too crowded you end up with just leaves and no roots. I also plan to plant some Leeks in between the rows of Parsnips. I'm not 100% convinced this is a good idea. If I had more space I wouldn't do it, but I'm trying to get the maximum yield possible from my space. I may decide to grow the Leeks only to the "Baby Leek" stage. It really depends how much foliage the Parsnips produce. it might turn out like this...


I don't think any Leeks would survive in amongst that!