At this time of year the badgers are a particular menace in my garden, especially since it is the time when my raised beds are rapidly filling up with seeds and delicate little plants. I find that without protection, it is almost a waste of time sowing anything, because within a day or two the seeded area will have been churned up by the black-and-white bulldozers! I have never actually seen a badger in my garden, but I reckon that if I were to sit up all night watching the garden I could pretty well guarantee seeing one.


It must be something to do with the availability or otherwise of food sources, but I seldom get badger damage in the Summer. I suppose that during the Winter many sources of food will have been used up, and by about March / April the badgers are desperate to find something edible. Or perhaps it's just that earthworms are particularly succulent at this time...? The badgers sometimes dig huge holes in my garden, but more often it's lot of little ones. There is often a long "furrow" ending in a hole, so I presume that the animals push their noses around in the soil until they detect a worm, and then dig down to catch it. Of course, the biggest accumulation of worms is in the compost bins. I have been very aware just recently that when I take the lid off one of the bins, it rustles as the surprised worms quickly try to hide. Just look at how many there are:- 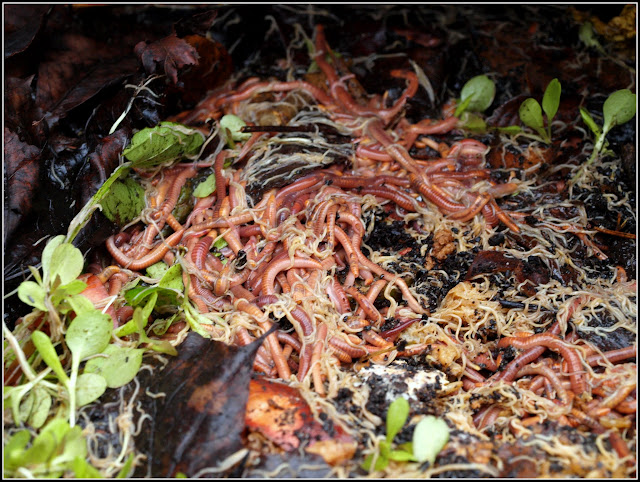 The worm population appears to be about evenly split between the red compost worms and the white potworms, which is strange since I have read that the two types like different conditions.

Naturally the badgers are also aware of those worms and they do their best to get at them, and if given half a chance they will unpack the whole compost-bin to do so, gaining access via the (pointless) little door at the bottom. Having had to re-pack the bins on countless occasions, I have taken to barricading those doors as comprehensively as possible: 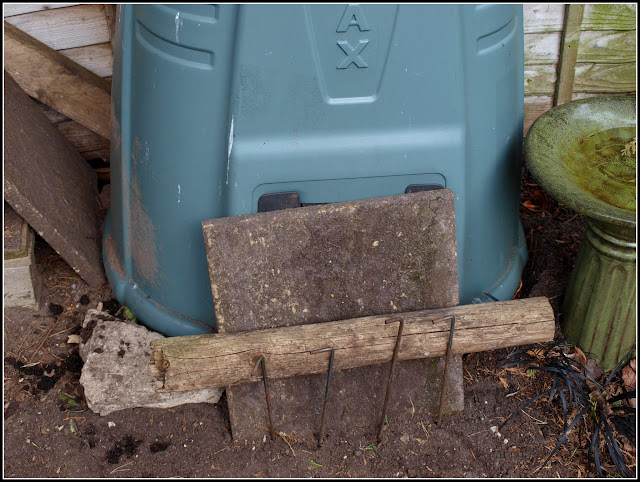 A badger is surprisingly strong for its size, and very persistent, so it will have no trouble moving a paving-slab unless it is held firmly in place!  Here's another variation on the theme... 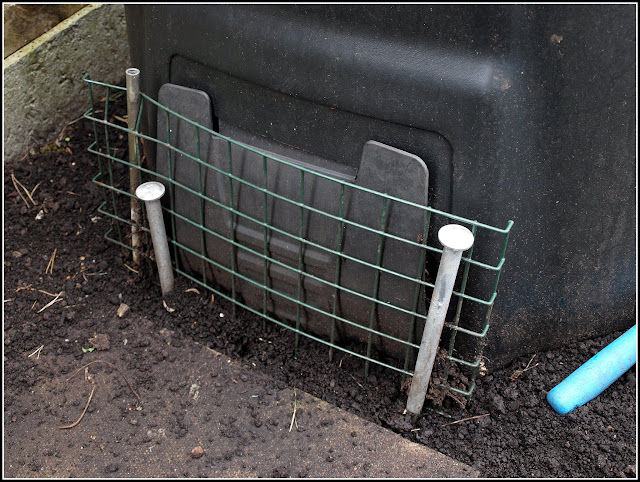 Those metal spikes are about 18 inches long! Notice here another use for those wire shelves from the mini-greenhouses.


Curiously, the badgers seem to be easily deterred by the netting which covers several of my raised beds, even though the nets are relatively flimsy. Perhaps badgers have a special fear of nets (which I could understand) and therefore give them a wide berth? I am gradually acquiring more nets and poles to support them and I look forward to the day when my whole plot can be properly protected!
Posted by Mark Willis at 12:00