It's a while since I wrote anything about food. That doesn't mean that I haven't been cooking - simply that during the Summer months there are more things happening in the garden that I want to write about, and cooking takes second place.


Today I want to describe a very simple recipe for a very RED meal... 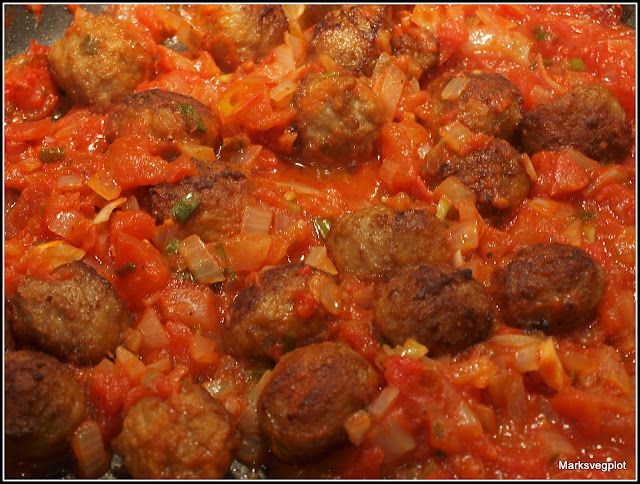 When we were in France a few weeks ago, visiting family, we bought some packets of Camargue rice, one red and one black. This type of rice is more akin to Wild Rice than to the normal Basmati or Long Grain that is more commonly encountered. It has a firmer texture and a nuttier taste, not to mention a different colour. In my recipe I combined some of both of the Camargue rice types with some ordinary brown rice, using equal quantities of each. The tricky thing is that they all supposedly have different cooking times - 45 mins for red, 35 mins for black and 25 mins for brown!


I cooked the rice a bit like a risotto, adding the different types of rice at the appropriate moments, and topping up the liquid as required. Initially I used home-made chicken stock, but I didn't have enough of it, so I then used plain water. Nominally, you use twice as much liquid as rice (by volume), but I found that it needed more liquid. [In retrospect, I think it probable that it would have been OK to just bung all 3 types of rice in the electric rice-cooker as normal!]. You don't see it in my photos, but when I wasn't photographing the pan of rice, I had it covered with a lid.


Judging when the rice was cooked was the most difficult part of this meal, but it was simply a matter of tasting a couple of grains every now and then until all 3 types were cooked. I found that the 25 mins cooking time suggested for the brown rice was over-optimistic: 40 was more like it.


While the rice was cooking I made a tomato sauce. I think this is the type of sauce that is referred to in some parts of the world (e.g. the USA) as a Marinara sauce.


I cooked some chopped onion for a few minutes in vegetable oil, until soft, then added a tin of chopped tomatoes and lots of home-grown herbs. I used Chives, Parsley and Savory, but you could use whatever you like. In my usual way, I also added a seasoning of salt, pepper and chilli. I don't generally put much chilli in my dishes, but I do put a little of it in many dishes. It adds a little gentle warmth... Leave it out if you don't like it. Many people would also add garlic and/or peppers to this sauce.


The meatballs were not home-made. Remember this was an easy mid-week supper. The meatballs came from Iceland - not the country, the frozen goods supermarket! We don't often shop at Iceland, but the other day Jane won a voucher to spend there and one of the items we got was these meatballs. They are actually very nice - allegedly as good as the world-famous ones served at Ikea! They de-frost quickly and only need a few minutes cooking. I cooked them in hot vegetable oil in a separate pan for 5 minutes to brown them before adding them to my sauce. 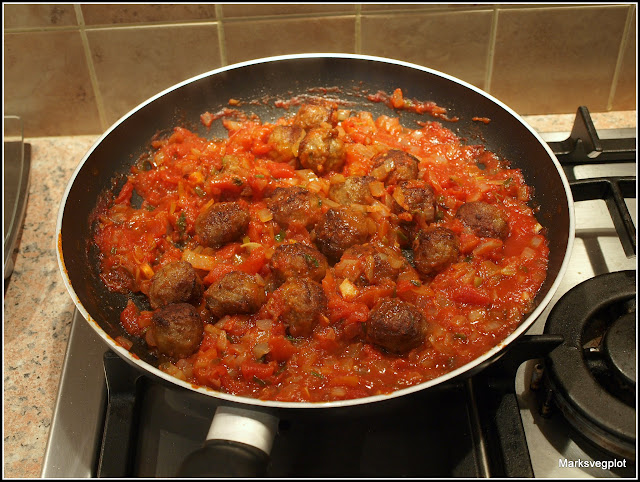 So, the only thing left to do was dish it up.


I chose to accompany our meal with a fresh green salad from the garden ("only" three types of lettuce in this one...), but I think a good alternative at this time of year would be green beans of some sort. And I should of course point out that if you want to simplify this meal, you could just use one type of rice instead of three.