This week saw me harvesting the first of my Beetroot:


They are quite late for a first picking, but they were held back by having to compete with the Peas. Now that the Peas have gone, the Beetroot are getting a lot more light, and responding accordingly.

The variety is "Boltardy", one of my long-term favourites. I have tried several others, but this one performs best for me. It lives up to its name too, and I get few bolters. Importantly, the taste is good too.

I have also picked the first of my "Processor" Dwarf Beans. Strange name, eh?


Just 115g, but very good-looking beans nonetheless. These are grown from seeds sent to me by a friend from the Netherlands. (Thanks, Elza!). Hopefully there will be more to follow.


There were more Runner Beans too. This is 360g of "Streamline" beans:

I haven't shown any Lettuces for a week or two, so I'm putting one in my post today. In truth we have been eating Lettuce frequently for weeks now, but it seems boring to keep including them in Harvest Monday posts. This particular one is "Tom Thumb", one of the best types I have grown this year.


This variety is sort of mid-way between a Butterhead Lettuce (such as "All Year Round") and a Cos. Almost like a "Little Gem" with softer leaves. Being small even when fully grown, it is an ideal Lettuce for growing in small gardens like mine.

During the week I pulled two more batches of the little cocktail Carrots, and as usual we ate them raw as a pre-dinner nibble. Carrots like this don't need to be peeled before eating, just given a good scrub with a stiff brush.

This is my first (and possibly my last) harvest of Blueberries for the year: 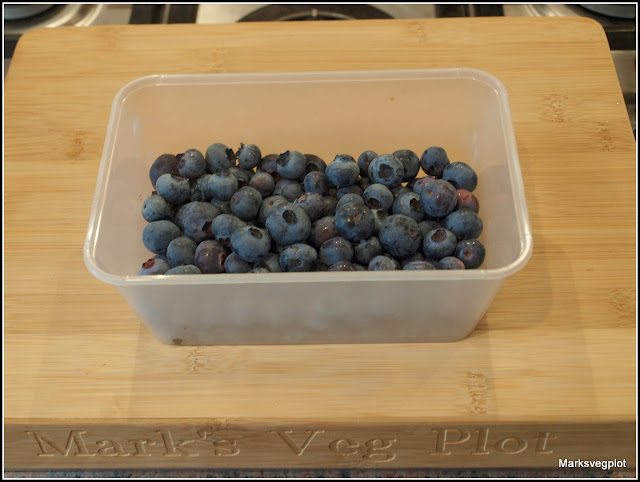 It was only 225g of berries, but at least it proves that my netting contraption worked, because these almost all came from the one protected plant. The three other, unprotected, plants only yielded a dozen or so berries between them. I know that if I want to have a bigger harvest, I will have to provide better protection, because the Blackbirds steal the fruit from the bushes when it is under-ripe - so they get it before me. Something to consider during the winter months, I think.


During the week I cut the first of my two "Gunma" cabbages. It was pretty big.

Once I had removed the outer leaves this is what it looked like: (at this stage it weighed 1.01kgs or about 2.25 lbs)

Another small picking of French Beans, both green and yellow: 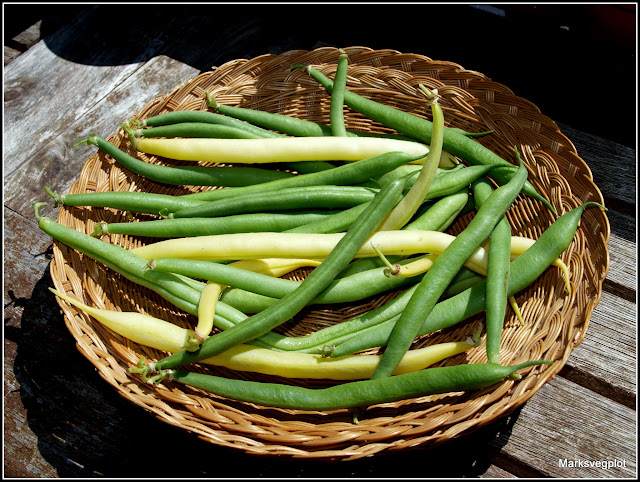 This week I'm also including in my harvest tally two huge bags of "Winterbor" Kale, even though we didn't eat the stuff.

Since Jane doesn't like eating it any other way, we have only used this a couple of times to make Kale Chips, but my four plants had got very big so I offered "Free Kale" on a local community Facebook page. Within minutes it had gone. One person had the choicest leaves for human consumption, another had the coarser leaves for her rabbit!


Well, that's my harvests for another week. Now why not go over to Harvest Monday on Our Happy Acres and see what others got...
Posted by Mark Willis at 09:00