Anyone who has been following my blog for a while will know that each year I grow little cocktail (aka Finger) carrots in a raised wooden planter that stands outside our kitchen window. 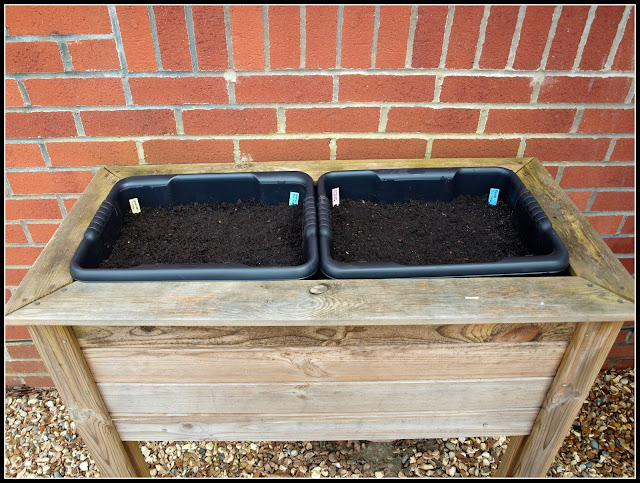 The planter conveniently holds two black plastic crates, and when filled with compost these make good containers for growing little carrots. They are about 8 inches deep.


Over the years I have learned that trying to grow carrots without protection from the Carrot Root Fly is futile, and after several experiments I have come up with this arrangement - a piece of Enviromesh supported by some rods, and held in place with pins pushed into the wooden frame of the planter: 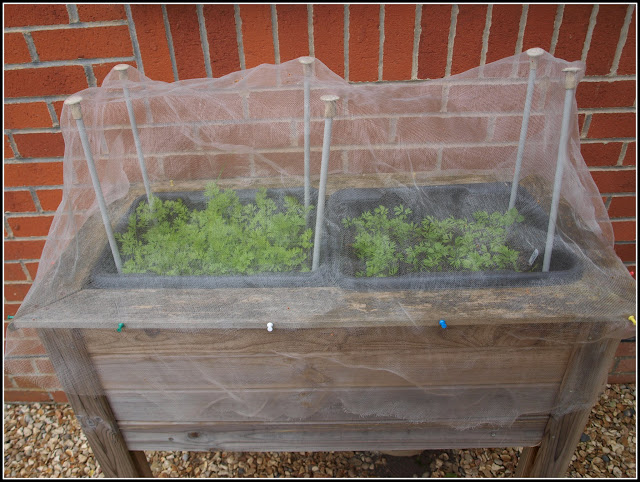 Another thing I have learned (the hard way) is that success depends to a large extent on the quality of compost or soil you use. One year I had a complete failure, due to compost contaminated with weedkiller. Such carrots as actually grew were tiny, stunted and distorted. However, most years I have managed to produce something acceptable!


I have tried several different varieties of carrot, including Chantenay, Mignon (short and fat) and Paris Market (small and round), but by far the best results have come from Amsterdam 3. There are many variants of this type, but to me they seem pretty similar.


On February 14th this year I sowed some each of "Amsterdam 3 Forcing" and "Amsterdam 3 Sprint". The latter failed to germinate (hardly surprising, I suppose, because I was using a 3-year-old pack of seeds), and I had to re-sow on 18th March. I discarded the old seeds and sowed a second batch of Amsterdam 3 Forcing. This year I used no compost (a rebellion against the disastrous results caused by the contaminated compost), but instead some of the Norfolk Loam I had bought for filling my new raised beds. The loam is very dense and does tend to get very hard unless rigorously watered. This makes harvesting the mature carrots a bit of a challenge, because when you try pulling them up by the leaves, the leaves often snap off and the carrot remains in the soil! I have found that watering the containers copiously shortly before harvesting makes a big difference.


I picked the first batch of these carrots on 2nd August. They were moderately good - not my best ever, that's for sure, but definitely OK.


I was a little dissatisfied with the shape. They are not as even and regular as some that I have grown. Nevertheless, in terms of taste and texture they are great! Since the preceding photo was taken, I have pulled two more similar-sized batches, all from the same container, and I will get at least one more before starting on the second container, which all amounts to a very worthwhile yield.

As I have written elsewhere, I think one carrot from the latest batch is an impostor. The short fat one in the photo above doesn't look like an Amsterdam 3 one to me. Still, it tasted just as good! As for the others, I think you can see what I mean about lack of uniformity. Not that it matters, since I'm not planning to enter them into a show. For me, the important thing is that there is no Carrot Root Fly damage.


Carrots like this are of course no substitute for Main Crop carrots, because they don't produce much bulk; they are a different thing altogether. I call them "Cocktail Carrots" because we almost always use them raw, eaten as a nibble with a cocktail before dinner. If I were doing a very special meal I might consider cooking a few of them, perhaps as part of a baby-veg medley, simply for their visual appeal.