Today's post is an update of progress with my two favourite types of veg- chillis and tomatoes.

Although I wouldn't say we have had lovely weather, it has for the last three weeks or so been significantly warmer and sunnier than it was in early to mid July, and the toms and chillis has responded well.

I picked my first ripe tomatoes about ten days ago. They were from two of my bush varieties - "Maskotka" and "Montello", both of which produce small red fruits which are great for snacking. A basket of them sits on the kitchen worktop and gets topped-up day by day. 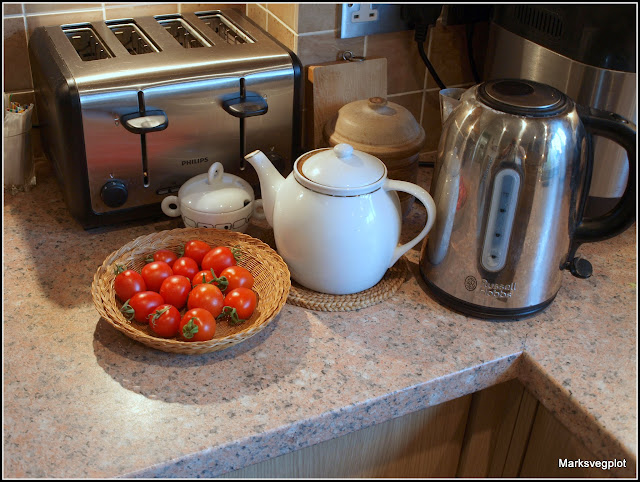 Now the bigger varieties of tomato are beginning to ripen. First to do so was this "Cherokee Purple":


The Cherokee Purple plant was initially very small and stunted, and lots of its early leaves were brown and shrivelled as a result of the weedkiller contamination. It eventually recovered, though it has not set many fruit. A plant that is under stress often responds by fruiting early, a sort of safety-mechanism ensuring that it takes the opportunity to reproduce before what might be an early demise.

The other plant most seriously affected by the weedkiller was "Stupice", which suffered major distortion of its leaves. The fruit seems unaffected though, and is ripening well now. This variety is reckoned to be an early ripener anyway.

The Larisa plant was one of the first to develop blight and regrettably the most promising of its big fruits was lost, along with a couple of others. However, I have managed to hold back the blight by rigorously removing any affected leaves, and the plant has produced more fruit. Some of them are getting quite big now, and I'm hopeful that I will be able to bring at least one or two to maturity.


These ones are "Dynnye", which will be orange-yellow when ripe. The big one is a bit of a shocker in terms of looks, but if it ripens successfully I'm sure it will be nice to eat. The fruits in this cluster have gone a lighter shade of green over the last few days, which is a prelude to ripening.

These are "Black from Tula", looking good and very uniform. Last year the ones I grew were very irregular, as black tomatoes often are.

I don't see any signs of ripening on them though.

One of the plants I kept from last year was "7-Pot Brain Strain", which produced just one fruit very late in the year. Despite being ravaged by aphids in the early months of this year, and being the victim of my Washing-up Liquid remedy, it has recovered and now looks pretty respectable:


Furthermore, it has just set its first fruit, fully two months earlier than last year, so there is hope of it ripening.

Another plant that over-wintered was this unknown variety. I think it is a no-name local hybrid because I grew it from a "volunteer" that came up in one of my raised beds.


The shape and colour of the fruit reminds me of "Purira". Some of them are black to begin with; others are a mix of green and black. However, it's not likely to be a hybrid of Purira because I am only growing that one for the first time this year!

This is "Purira". The fruits look similar to the previous one, but the flowers here are white, not purple. 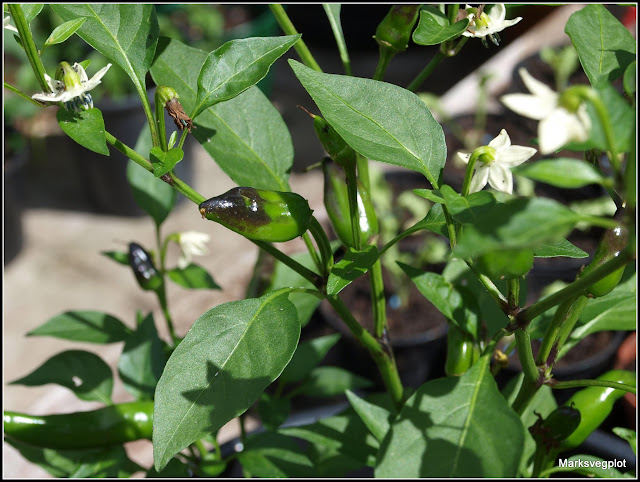 Now the experimental "Challock Chilli". This variety, as you may remember, is only in the development stage and is evidently not yet fully stable. The fruits have developed in a number of different shapes. Some are nearly round; others are wedge-shaped, or bullet-shaped.

This one is "Nigel's Outdoor". It was one of the first to produce fruits, though none of them have ripened yet.

I'm keen to show off this one too. It was supplied as a "Gusto Purple", but clearly isn't. However, it is a very good-looking chilli.


That's all for today, folks. If I showed you them all this would be a very long post! Hopefully before long I'll be able to post some photos of ripe chillis.
Posted by Mark Willis at 12:00