Watering of a different sort

Normally at this time of year I would spend a few hours a week watering my plants, particularly the ones in pots. I'd probably have to use the hose-pipe on the raised beds every few days. The water-butt might well be dry by now. This year is different. 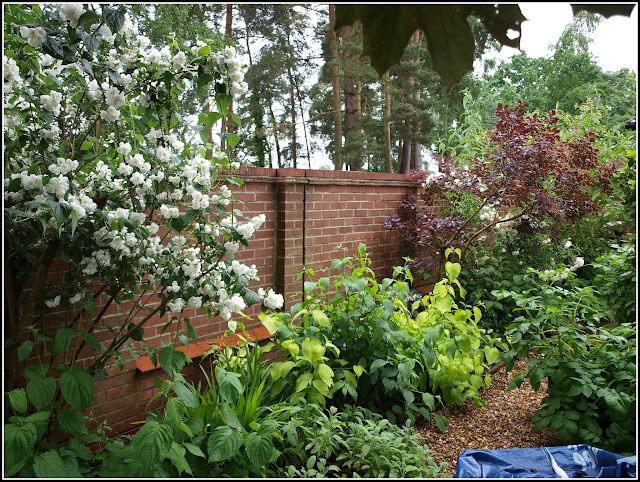 Overnight Wednesday / Thursday we had a really bad thunderstorm that lasted several hours. The amount of rain that came down in a few hours is barely credible. The sort of thing that prompts words and phrases like "the heavens opened"; "cloudburst"; "tropical downpour"; "a deluge of Biblical proportions" etc. The weather-station at Farnborough (3 miles away from us) reported that 46mm of rain had fallen in 8 hours. We're not used to this. Thank goodness that our house is built on a little (very little) hill. Otherwise we might well have been flooded-out.

Lying in bed at two-o-clock in the morning listening to the persistent rumble of thunder and the rain hammering down I was very worried for my garden. I had visions of all the plants being completely flattened. Things always seem worse in the middle of the night, and fortunately when it went light it became apparent that my fears had been unjustified. Yes, everything was bent double with the weight of water; yes, one or two pots were full to the brim, and the birdbath and micro-pond were overflowing, but no major damage. The worst damage was to some of my big tomato plants, which are lined up close to the house. Torrents of water falling on them from overflowing gutters had shredded many of their leaves. 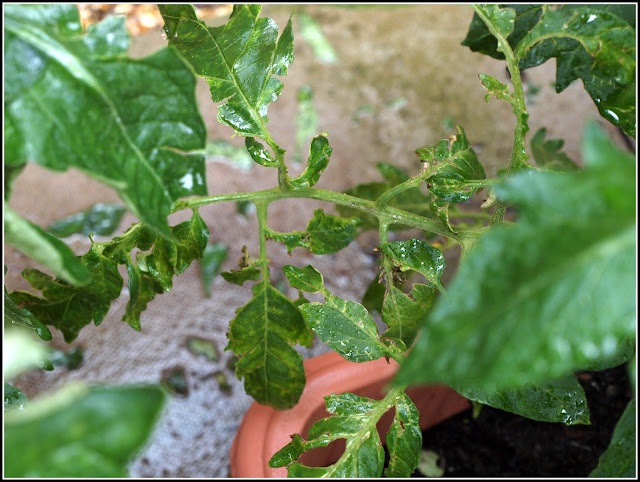 They will survive, but they undoubtedly had a big shock. I have since moved the plants away from the house for a while... 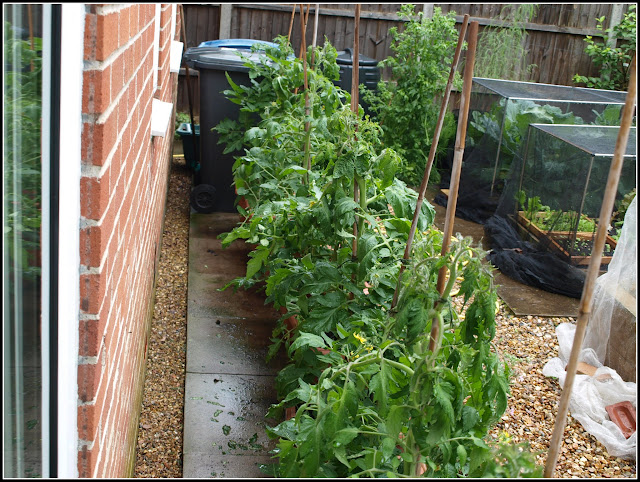 As soon as it was feasible to do so (and with rain still falling), I went out first to assess the damage and then to do what I could to alleviate it. One very necessary job was to remove from under the tomato plants their water-retaining saucers, which are definitely not required just now! I also went round the garden gently shaking the branches of all my shrubs to reduce the amount of water on them. My Philadelphus tree is in full bloom at present and its branches were sagging nearly to ground level, as were those of the big white rose-bush. 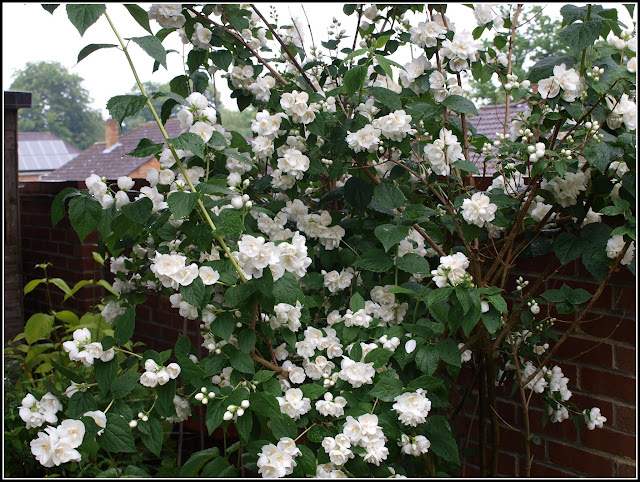 I have seldom been so grateful that I possess some little plastic greenhouses. Having seen the weather forecast the previous evening, I had taken the precaution of moving a number of delicate young plants into cover in one of them. This probably saved them from destruction. 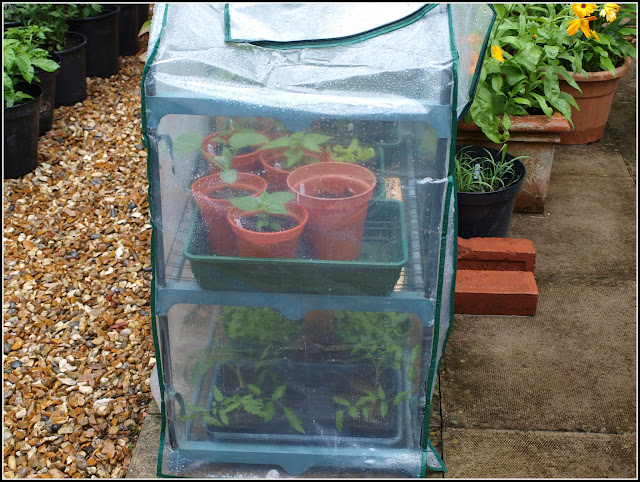 With the threat of a repeat performance 24 hours later, I brought some of my long cloches into action, so that everything very vulnerable was under cover. 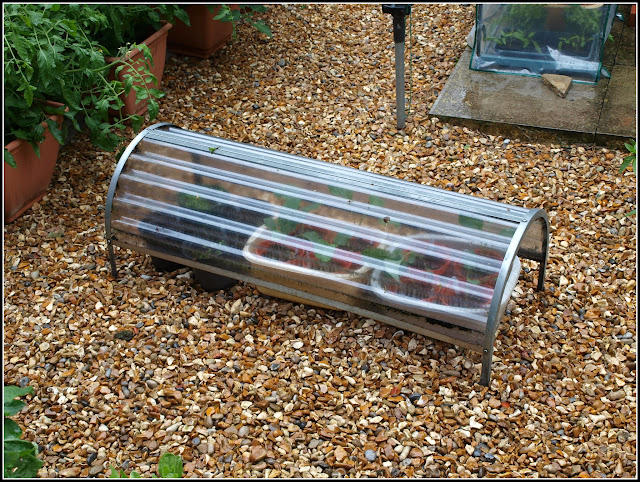 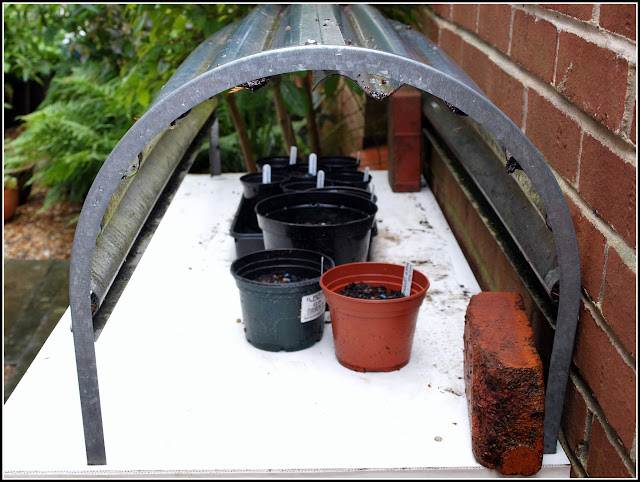 It's times like this that being Retired can seem like a mixed blessing. On the one hand, it is convenient that I didn't have to rush off to work, and thus had the opportunity to repair damage, but on the other hand it's depressing to sit at home watching more rain coming down on an already saturated garden. It might (almost) be better to be at work so that my mind would be on other things! 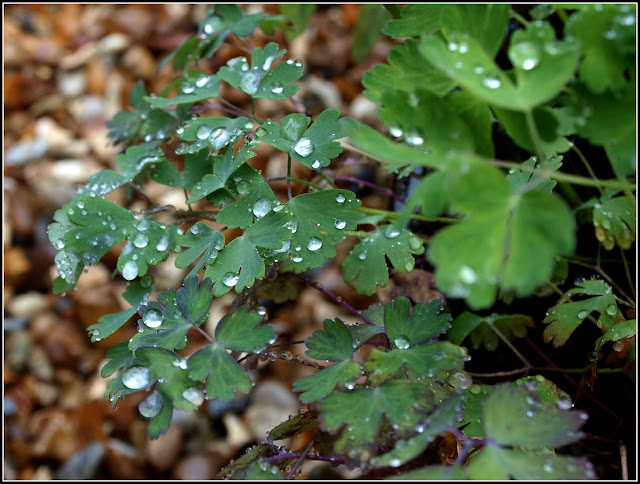 Looking on the bright side, I'm conscious that my tall raised beds are a big asset in conditions like these. They drain well, and keep everything above the general water level. When we first lived in this property and the back garden (now my veg-plot) was mostly a grass lawn, it frequently used to flood after heavy rain, and without the raised beds my veg would have been in dire trouble these last 48 hours.
Posted by Mark Willis at 12:00