I'm sure that many regular readers will remember me writing about problems I had during 2014 and 2015 with compost contaminated with weedkiller. Last year the problem was less bad than the previous year, and I thought that perhaps I'd seen the last if it. Unfortunately not.

I am about 99.9% sure that the problems I encountered were caused by weedkiller contamination in multi-purpose compost produced by the firm Westland. For this reason I resolved to stop using their products. I was also at one stage suspicious of the composted stable manure I used to use, but I think it was eventually exonerated. This year I have not bought any multi-purpose compost at all. I raised all my seeds (including chillis and tomatoes) in Levington's John Innes No.1 and transplanted the seedlings when ready into John Innes No.2. Both of these are specially-formulated mixtures and by rights ought not to contain any of the recycled garden waste that is the putative source of the weedkiller. But I'm still getting problems!


The most obvious sign of the issue is that the leaves of the plants become distorted and curl underneath themselves rather than standing out straight. A certain amount of leaf-curl is normal - it's associated with temperature differences between day and night-time temperatures - but this is worse than that. 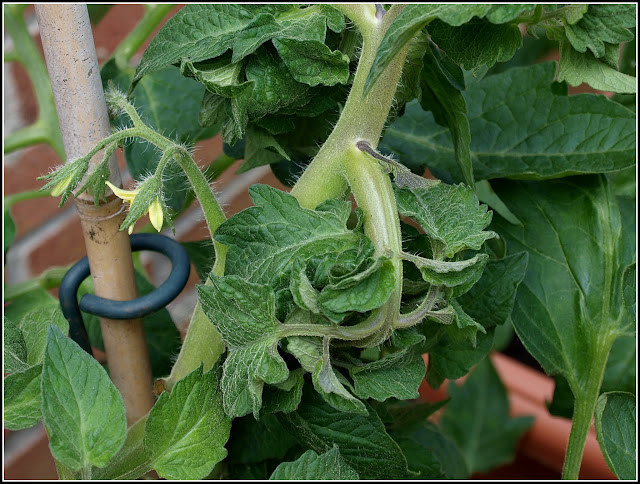 In extreme cases, the plants hardly form leaves at all; instead they produce what looks like fern fronds. Fortunately none of my plants this year are as bad as that - yet - but if you want to see what I mean look at this post from a couple of years ago: Contaminated compost


For future reference this is what I have grown my tomatoes in this year:
1. Seeds sown in Levington's John Innes No.1
2. Seedlings transplanted into individual pots containing Levington's John Innes No.2
3. Plants transferred to big containers with an equal mix of: Melcourt Sylvagrow peat-free growing medium, Norfolk loam (purchased) and home-made compost.
4. At planting time I added pelleted chicken manure and Growmore general-purpose fertiliser.


In case you're wondering, No, last year's contaminated compost (the stuff used for growing the tomatoes) did not go into my compost bins. It went to the tip. 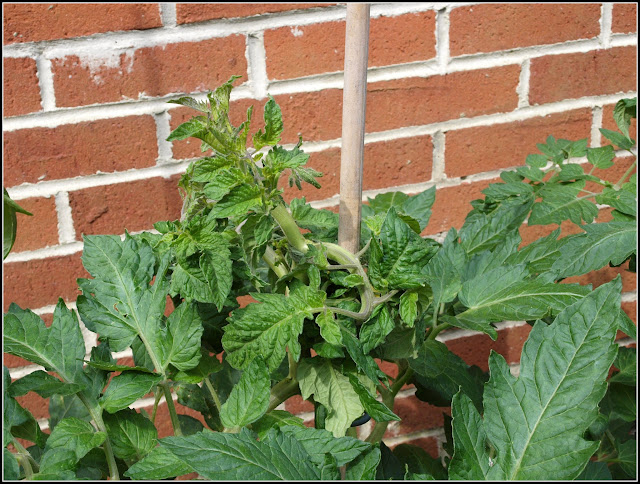 It's hard to know where the blame lies this time, but I'm considering the possibility that traces of the weedkiller could be lingering in the "hardware". I am using the same pots, the same canes and the same metal cane-supports as before. I washed the pots and supports pretty thoroughly, but I didn't think to wash the canes! Apparently these weedkillers are so powerful that to do the sort of damage I'm talking about, just one drop diluted in the amount of water contained in an Olympic-sized swimming-pool would be enough! Is it possible / likely that the canes have absorbed enough of the contaminant to still do damage now?


Significantly not all of my tomato plants are affected, at least at present, and (as far as I can tell) none of the chillis. 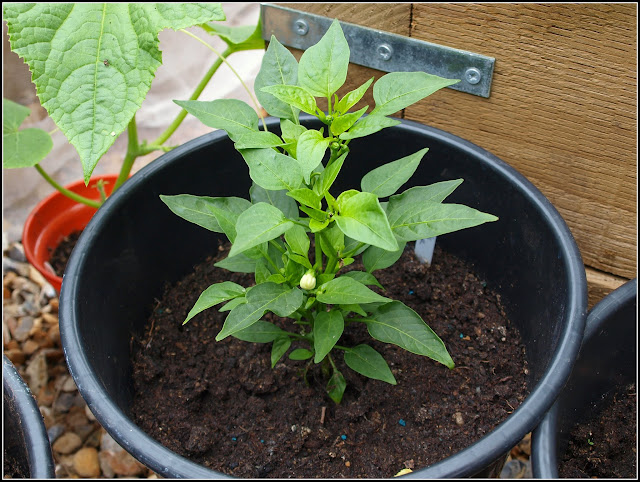 I know there is nothing I can do about this problem now. The damage is already done before you can spot the effects. I take comfort from the fact that I know from experience that I will probably still be able to get a reasonable, even if smaller than usual, crop of tomatoes, and (allegedly) the weedkiller is harmless to humans (I'm not 100% convinced of that). All the same, it's hugely disappointing when I thought I had done everything to avoid being hit by this same problem again. It's getting to the point where I may have to give up growing tomatoes all together, which I really don't want to do.
Posted by Mark Willis at 12:00