An allotment. Yes or No?

Just recently I discovered a new blog - Life at No.27, which describes the "journey" of a first-time allotment-holder, converting an overgrown wilderness into a productive vegetable patch. This has caused me to think again about whether I should get an allotment myself. Many readers will be aware that I retired from work at the end of March this year, so theoretically it could be a good time to apply for an allotment, because I will have more time to devote to leisure pursuits. But is it the right thing to do?


I recently had the pleasure of meeting Life at No.27's author, Annabelle, and couldn't help but be struck by her enthusiasm and energy. She describes herself as a "20-something-year-old", that's to say a LOT younger than me! It is evident that she is not averse to a bit of hard graft. If you look at her blog you can see the transformation she has effected in a few short months (she only took over the plot in October 2015).


I suspect that this is a task that confronts many new allotmenteers. It could be that the allotment only becomes available when the previous occupant finally admits that they can no longer win the constant battle against the weeds, or even that the Allotment Committee expels them because the plot has become too overgrown. The first task then is probably the biggest: to get rid of all the grass, brambles, weeds, old wooden structures and any miscellaneous debris abandoned by the previous owners. Now, would I want to do that? Indeed, would I be physically capable of that? Although I am still relatively physically able, I do suffer from a lot of aches and pains caused by Fibromyalgia, and I might find the task too big.

I think if I were to apply for an allotment (and I definitely haven't made the decision to do so yet), I would want to go and see the state of what's on offer. Near where I live lots of new houses are being built, and allotment sites are part of the development plans. One of these new housing estates is on the site of what used to be the military barracks where I was stationed when we first came to Fleet in 1981. Wouldn't it be ironic if I were to one day dig a vegetable plot on the land where I once marched to and fro with my soldiers? The allotment site in question is currently open to new tenants and I think I would qualify because I live pretty close by - certainly within walking distance. Furthermore they have plots available in various sizes, starting with what is described as a "Raised bed plot (without raised bed)" of 18 -20 square metres, and going up to 142 square metres.

The "within walking distance" business is important, I believe. I have read a lot about allotmenteers who drive or cycle some fairly long distances to get to their plots and this seems to me like a disadvantage, not only because of the travelling time, but also because it would most likely mean you would only go there infrequently. Unless your plot had a shed in which you were happy to leave your tools and equipment (and thefts / vandalism do seem to be pretty commonplace), you would have to think very carefully about what you would need to take with you each time. Gardening at home doesn't have these problems.

Another thing that bothers me is that having an allotment means that you have to abide by other peoples' rules - and our lives have enough rules governing them already, don't they? The formal Rules of the site I am referring are contained in a document 11 pages long. In contrast, there are no rules that govern how I manage my own back garden (other than official Legislation, of course). To be fair, most of the rules are eminently sensible and I would have no problem complying, but there are bound to be a few little niggles, aren't there?


What about water supply? I see that the allotment site I'm considering provides water-points, but how many is not clear, and where are they anyway? Could it be that one has to walk a long way for every fill of a watering can? Hoses and sprinklers are specifically forbidden too, though I can see the logic of that. Here at home, it's only ever a few paces to fill up the watering-can from the water-butt or tap, and I'm free to use a hose if I want, as long as there is not an official Drought Order in place.

Maybe the thing that concerns me most though is the quality of the soil. Having been gardening at my present property since 1991 I have done a lot to boost the structure and fertility of my soil. The site I have been referring to in this post is on previously uncultivated land. I'm not sure exactly where the site is situated, but in all probability it is underneath what used to be the Parade Square or the Motor Transport Park and therefore heavily compacted! Looking at the Chat facility on the allotment association's website, some of the discussion is about poor drainage and flooding due to the steeply sloping ground that some of the plots are on. They say that the Building Contractors have put in a layer of topsoil (of unspecified depth) but underneath is hard clay. Maybe I don't want a plot there after all...? 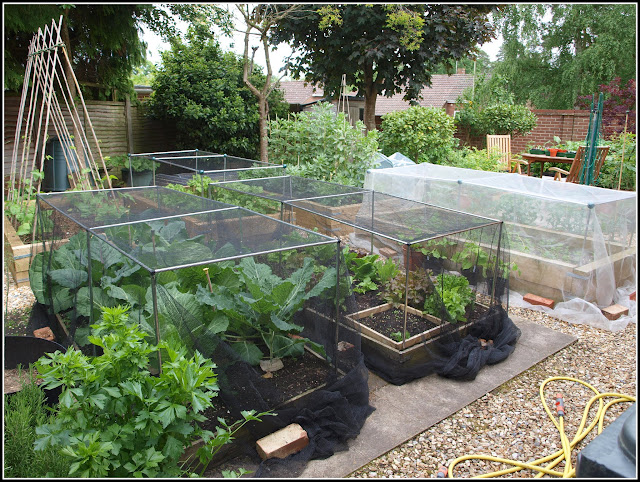 What's on the Plus side though? Well, the main attraction would be to have some extra space to play with. My current garden restricts me to growing small quantities if I want variety. If I had an allotment I would concentrate on growing a bigger quantity of crops, but of a smaller range of types. There's also the social side of it. I enjoy discussing gardening topics with my friends on Blogger, Twitter, Facebook etc, and swapping seeds with some of them, but it's not the same as meeting them in person and seeing their fruit and veg for real. You can often learn something far better if you see it in the flesh, so to speak. The other good thing is that if I had an allotment within walking distance, I would walk there, thus benefitting from additional fresh air and exercise in transit.

By the way, I'm not expecting answers to all my questions and observations. This post is really a way of helping me to clear my own mind on the issue, but if you have any thoughts that might help me make my decision, then please go ahead and share them with me.


P.S. I have now got permission to go and have a look.