Dull and gloomy - good or bad?


Actually, although as a person I would prefer the weather to be brighter and sunnier, I think most of my plants are reasonably happy with the cool-ish, cloudy, fairly damp weather. They always say that legumes should have plenty of water once the flowers appear. Well, my Peas look happy enough, and the pods are beginning to swell quite nicely. I may end up with my best crop of them ever!


Likewise, the Broad Beans are setting lots of lovely pods which are growing at a satisfyingly rapid pace:

I don't know if you have thought about this before, but have you noticed that the Broad Bean pods start off being upward-pointing, and then as they mature they gradually shift towards a downwards-pointing posture?

Earlier in the year I grew some very nice Radishes at the foot of these Broad Bean plants (when they were small), but the second sowing I put in are not going to come to anything - they are just not getting enough light. The beans shade them on one side, but the low general light levels are a factor too:


The Climbing Beans are enjoying the gloomy conditions too.


The beanstalks are shooting up very rapidly. I find that sometimes they relish a little help with climbing the relatively smooth bamboo canes, so I tie a bit of soft string round them very loosely to hold them in place. 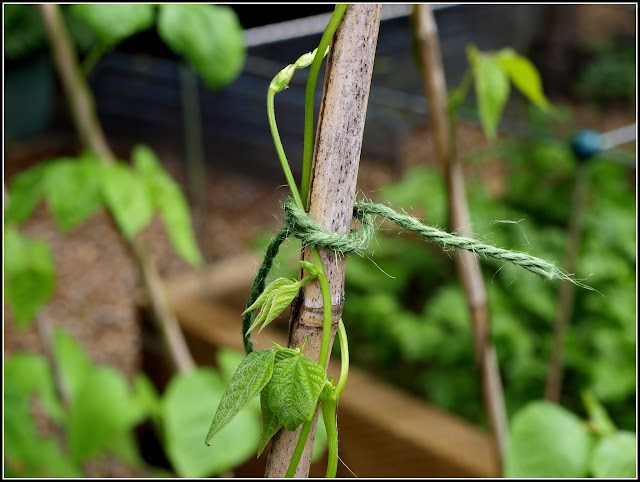 One or two of them have reached the top of their supports now. I nip them out when they get that far, which prompts them to put out side-shoots lower down. 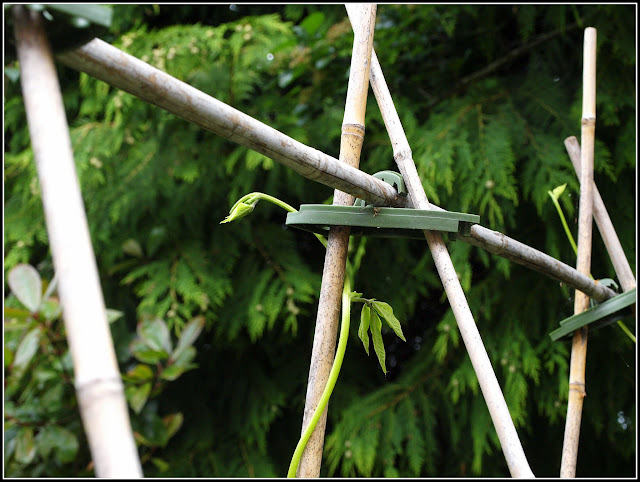 Two Sundays ago we had a really hot day, and some of the leaves of the Runner Beans got "crisped" (technically called "Tip-burn", I believe). They won't know what's hit them if we get any real Summer! 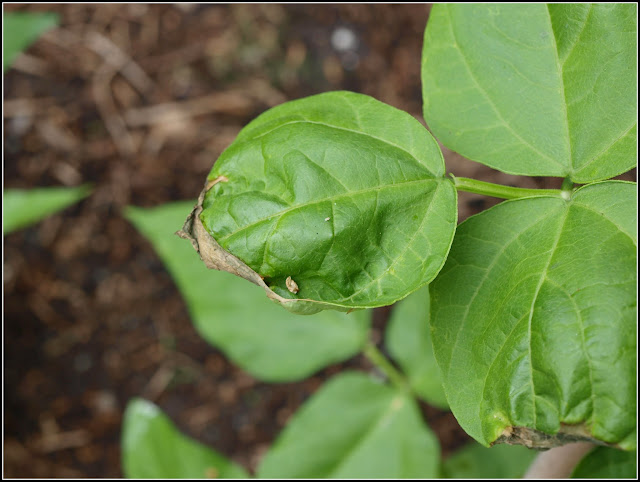 The brassicas are doing OK too. Still practically no slug damage on my Cabbages!

The Kale plants at the corners of the Broad Bean bed are getting to a size where I might be tempted to pick a few leaves. I had a nibble of one the other day and it was very tender and almost sweet.


Well, some of the veggies evidently thrive in gloomy weather, but what about the flowering ones? My tomatoes are all in full flower now, though no fruit has set. I expect they would prefer some sunshine.

Usually by mid-June I'm watering my container-grown tomato plants at least every other day, but I have not had to start that yet - it's about once a week at present, because they have been benefitting from rain showers practically every day.


The bush tomatoes certainly seem to be thriving:

Just like the cordon tomatoes, the bush tomatoes have lots of flowers, but none of the fruits have set just yet.

Right, so the overall verdict seems to be that the garden is managing OK without much sunshine... Rats! I want sunshine so that I can sit outside and enjoy my garden.