At present my garden is "ticking over quite nicely" as the saying goes. (If you don't understand this, it means something like "idling"  - the way a car engine is when the vehicle is stationary).

I have done all the planting for Winter. The Brussels Sprouts are coming along well. Nothing needs doing to them at present, except perhaps removing any of the lower leaves that turn yellow. Getting rid of those promptly helps to reduce the risk of fungal infections, which are a definite risk at this time of year. 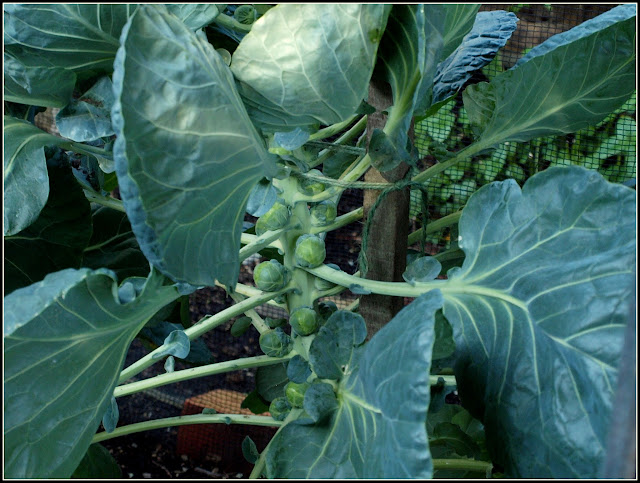 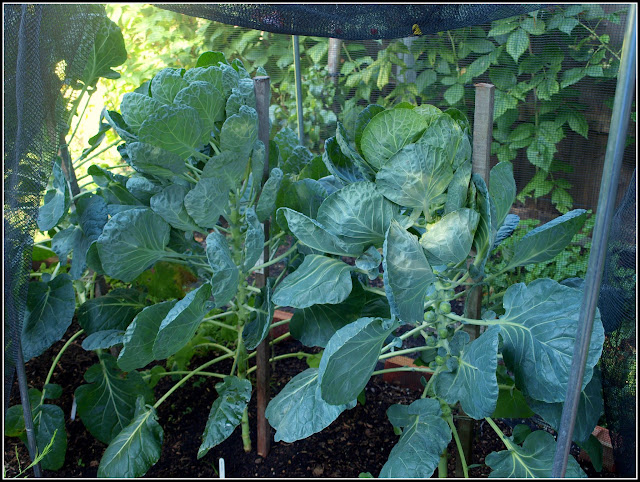 Likewise the Purple Sprouting Broccoli is quite happily doing its own thing. The plants are huge this year. You can see how they are pushing up against the netting now. 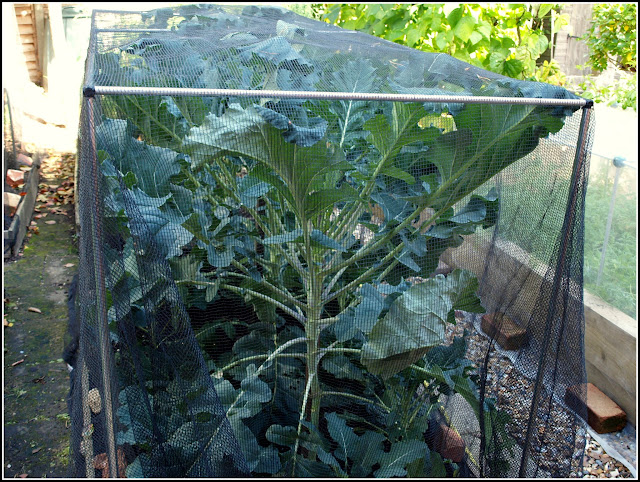 Size is determined by many factors, but amongst them is density of planting. This year I have only three PSB plants, whereas I usually have six. Sometimes Less is More! 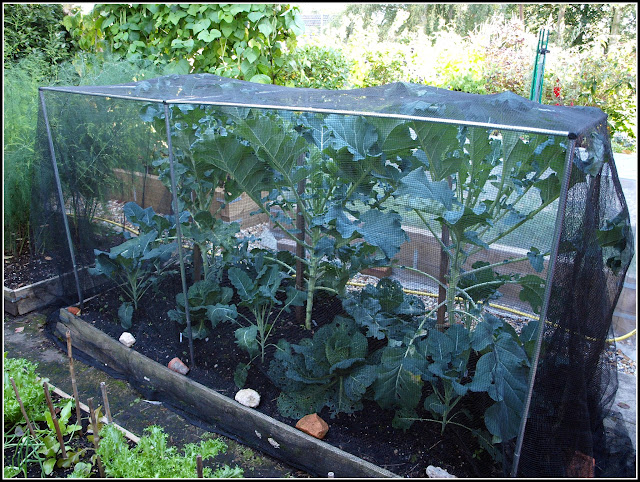 The plants around the edges of that raised bed are Brokali and Savoy Cabbage. I recently removed some of the leaves of the PSB to allow the smaller plants to get more light.

When I planted-up that bed I had two Cabbage plants left over, so I kept them just in case of casualties. A few weeks later I put them into containers that had until recently held potatoes. They seem to be doing OK. A lot smaller than their siblings of course, but that's a good thing because it just means they will develop later, thus extending the harvest period. 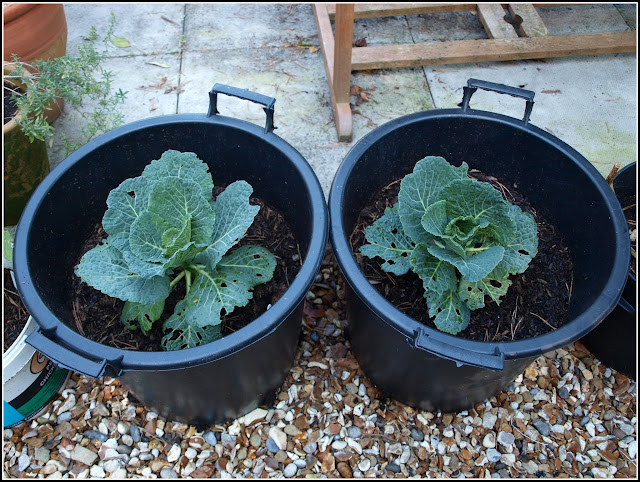 The Leeks are still very small, which is worrying. I was hoping that by now they would be much bigger than this, but they are only about an inch in diameter. 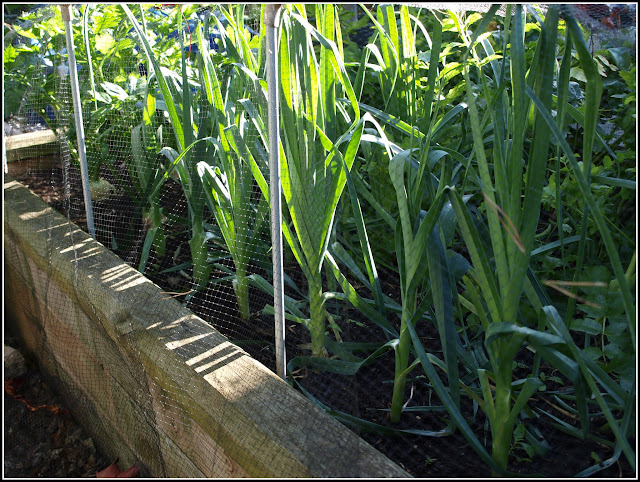 OK, I'm not in any hurry to dig up those Leeks. It's not as if I need the space for another crop just yet, so they can stay there for another 4 or 5 months if they really want.

The beans will need to come down some time, but again I'm not in a hurry to do this, because there are still some pods developing. The "Jed's" plants have just about finished producing now, but the "Enorma" ones are still going strong. 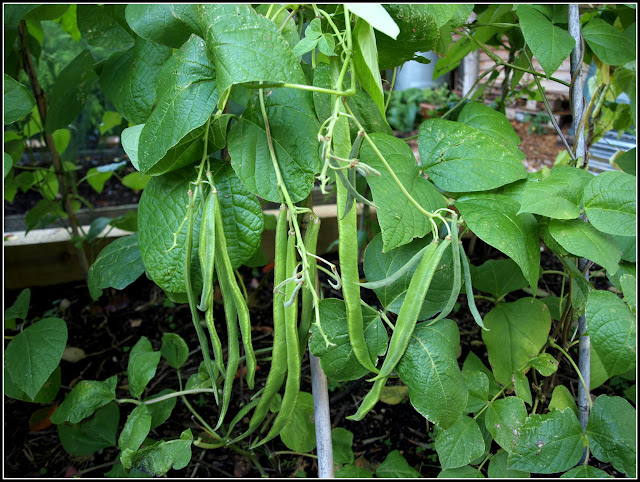 The purple-and-green pods of the mystery French bean are big and fat now. Although since there is only one plant of this type there won't be much of a crop, I'm looking forward to it because I think I will save some seeds and grow them "properly" next year. 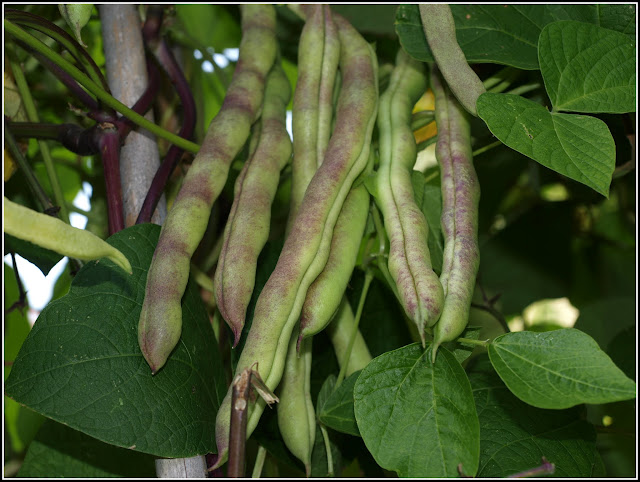 I have left a few pods on the "Kew Blue" for the same reason. I have been very impressed with this variety. It has been very prolific. Definitely worth growing again. 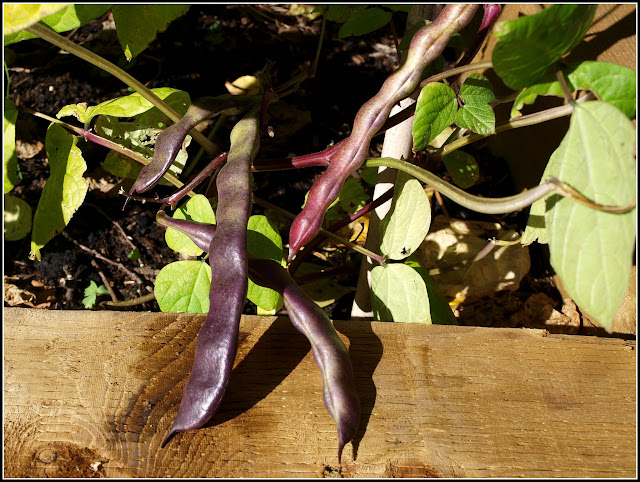 I very much doubt whether I will be growing any yellow beans - ever. My opinion has been confirmed: they produce a much smaller yield than either green or purple-podded varieties. 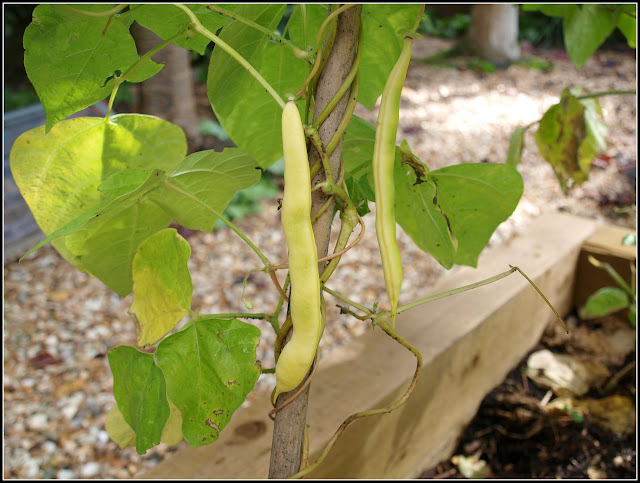 Next year I expect I will return to growing my old favourite "Cobra". I have missed it this year!
Posted by Mark Willis at 12:00