I have something new to report this week. I have for the first time harvested some Spring Onions! (I can see why some people call these Green Onions.) 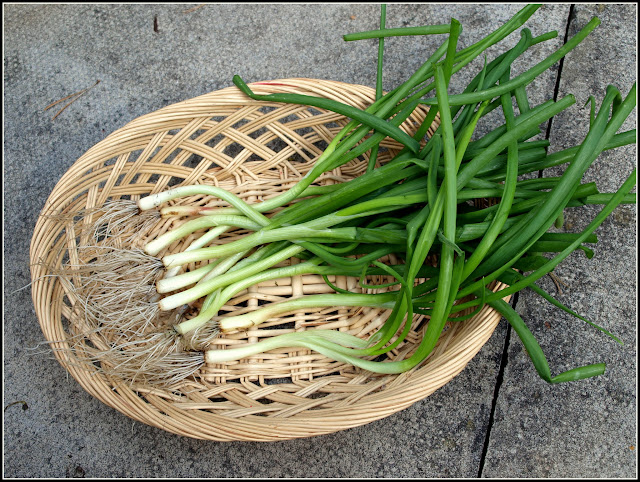 Yes, I know they are not particularly impressive, but by my standards they are mighty fine! My previous efforts with this veg have not met with success, so I am pleased with these. I suppose they would have got a bit bigger if I had left them, but they were in danger of being swamped by the Endives growing nearby, so I thought I had better "quit while I'm winning", so to speak. 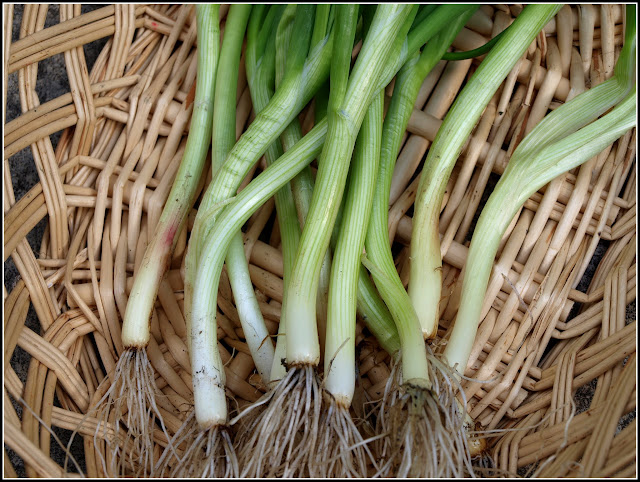 As you can see, here is barely a hint of red on them, even though this is a variety called "Rouge Commune". Maybe that one on the left is vaguely pink...?

They went very nicely in a Chinese-style stir-fried chicken dish that Jane cooked (along with one of my chillis): 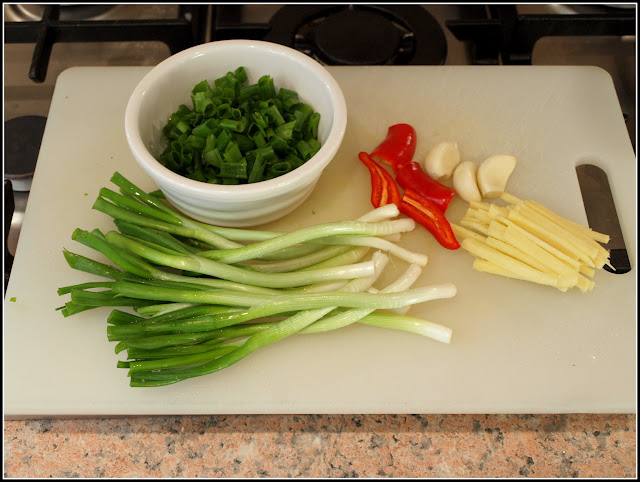 The onions may not have been very pink, but you can't accuse these of not being red enough! 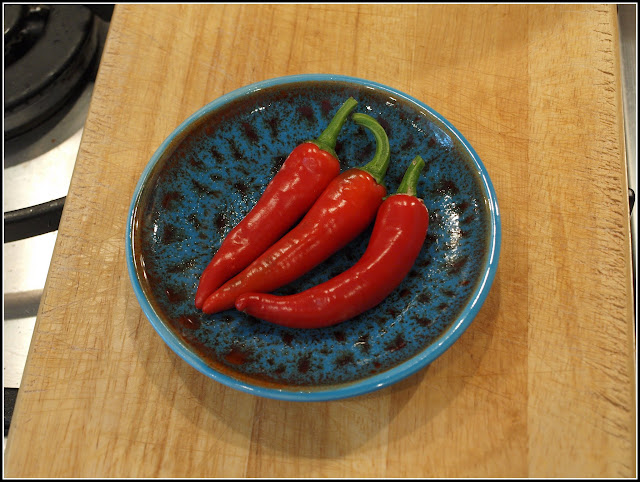 They are "Cayenne" chillis. So far this is the only one of my varieties to produce any ripe fruit, and even then I have only had six ripe fruits. With the way the weather is this year I rather fear that most of the chillis will never make it to maturity.

Unfortunately my precious chilli harvest has been somewhat reduced by slug damage: 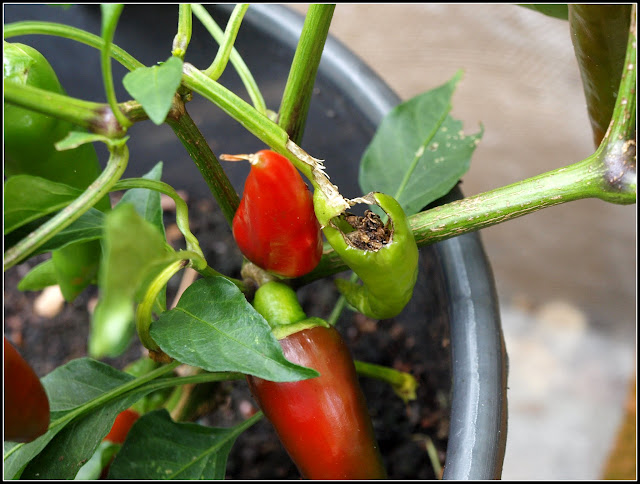 Why do the little blighters have to go for the "high value" crops like chillis and tomatoes? Couldn't they just make do with a lettuce or two? I have loads of those and I could afford to lose one or two... 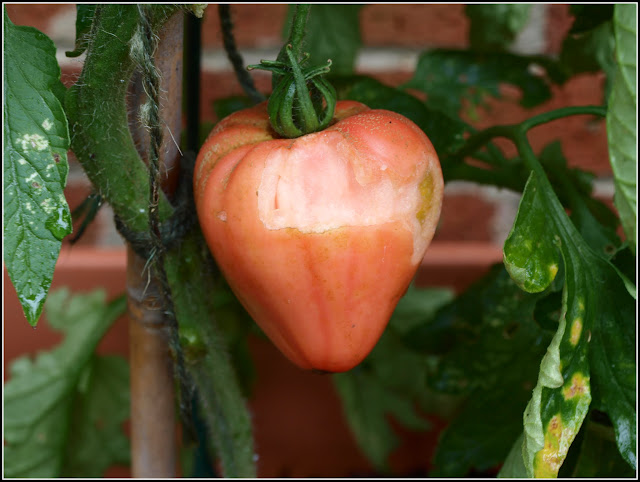 The beans are still doing well.

The "Enorma" Runner Beans are very good - mostly long and straight, with few blemishes. The other Runners are those I nicknamed "Jed's" because I got the seeds from a neighbour of my MIL, called Jed. I have no idea what variety they are and I suspect that neither has he. They are probably ones that have been handed down from fellow allotment-holders. They are OK, but not very impressive - the pods are mostly quite short and few of them are straight. Nor is the yield as good as that from "Enorma". I won't be saving seeds from them for next year.


I have picked quite a few more tomatoes, mostly the bigger ones now, though I have been very lax about photographing them. These ones are "Cherokee Purple" and "Black from Tula", which are hard to tell apart. Both are very nice. The number of fruit per plant is not high, but most of the fruits are big. 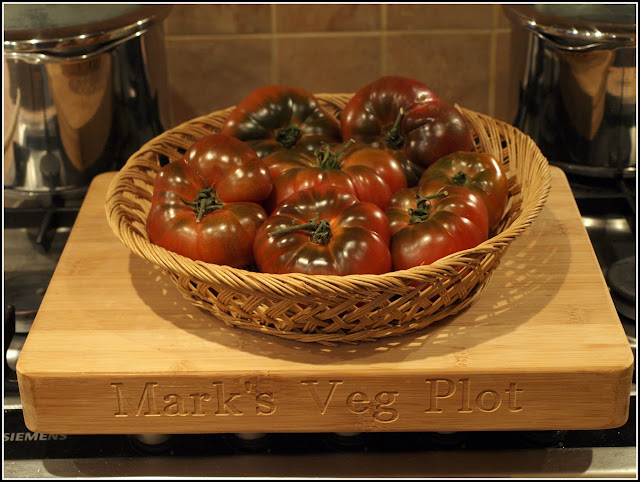 This is a mix of varieties. The big one in the centre is Cherokee Purple, the two dark ones at the bottom are Black from Tula, the bigger red ones are Ferline, and the small ones are Primabella. The medium-sized rather blotchy ones are Harbinger. 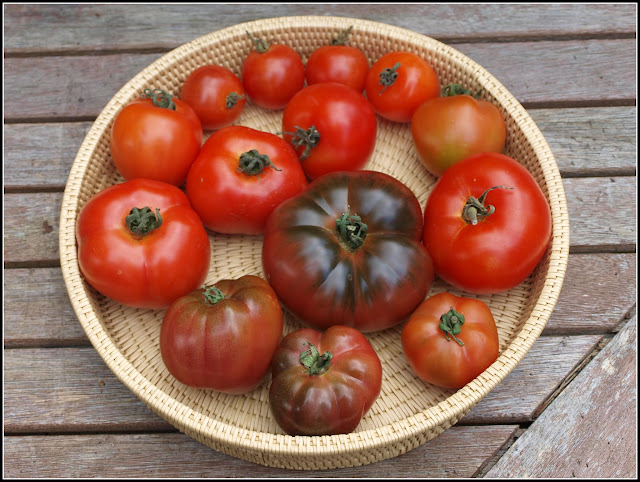 I have also picked all this lot, because blight is affecting several of my plants and I felt if I left these fruit any longer they might be lost. The really big ones are Ananas. 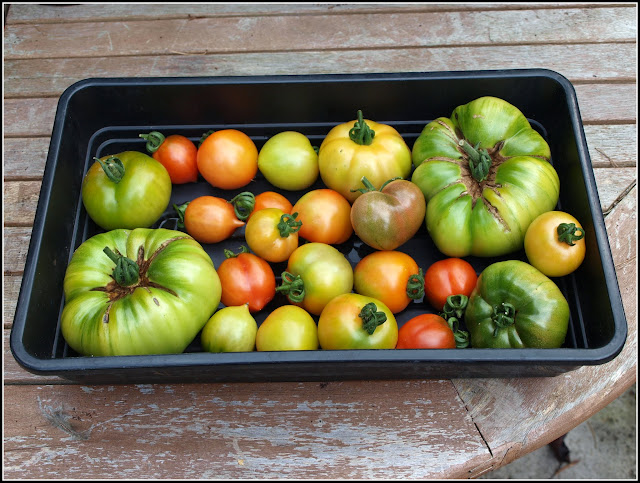 I got another little batch of Raspberries. The plants are now covered with flowers - about two months later than normal. Will they be able to produce mature fruit though?? 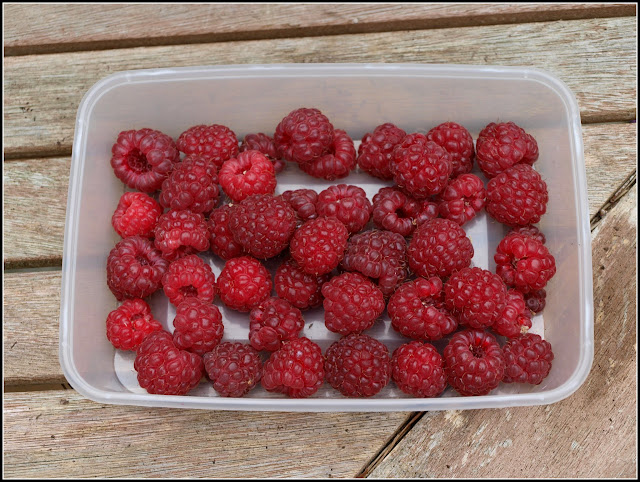 My last harvest to report this week is this Cress, which I sowed on August Bank Holiday Monday: 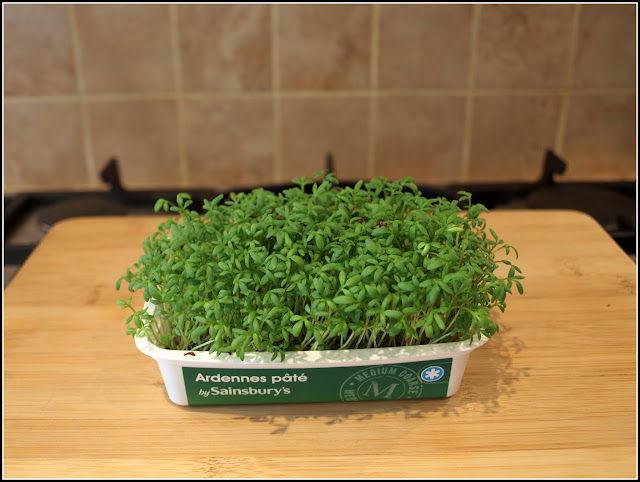 It has taken longer than I anticipated, but I suppose you can't really complain about getting a crop that goes from seed to maturity in two weeks!

This is my contribution to Harvest Monday, hosted as ever on Daphne's Dandelions, so please go and see what other people have harvested this week.