Most you know already that it has not been a good year for chillis in Mark's Veg Plot. By the time they had got going the Summer - such as it was - had all but gone. I have brought indoors as many plants as our windowsills can accommodate, but some of them have had to remain outside. 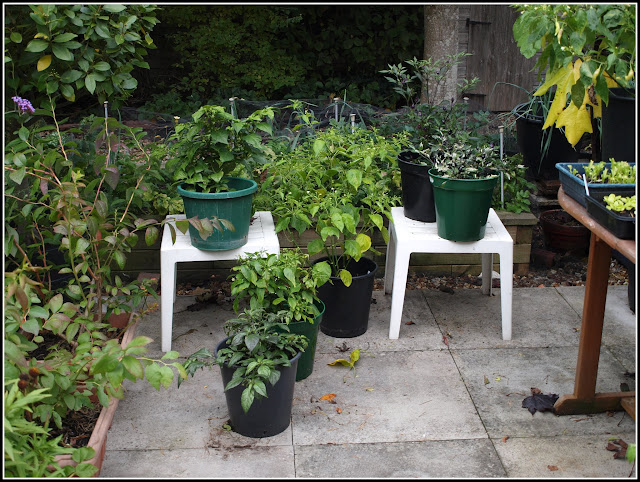 Some of the shorter plants are perched on those tables in order to try to get them some more light, avoiding being overshadowed.

This is "Jay's Peach". There is no way this one is going to produce ripe fruit this year, even if I bring it indoors! I'll try that one again next year. 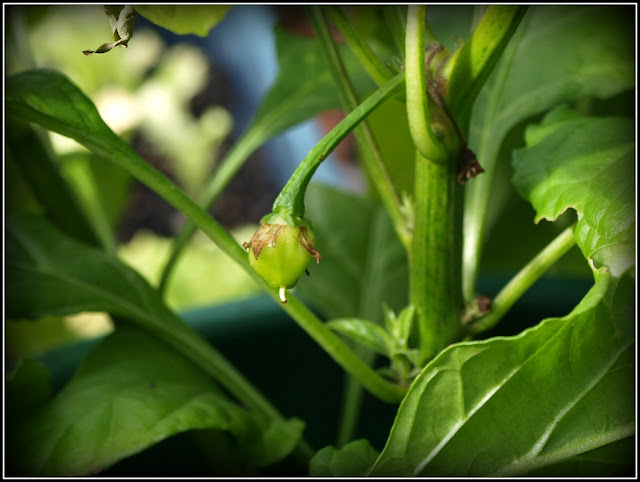 Likewise, this "Habanero Orange" is setting fruit far too late. The one you see in the centre of my photo is about the size of a 5p coin. 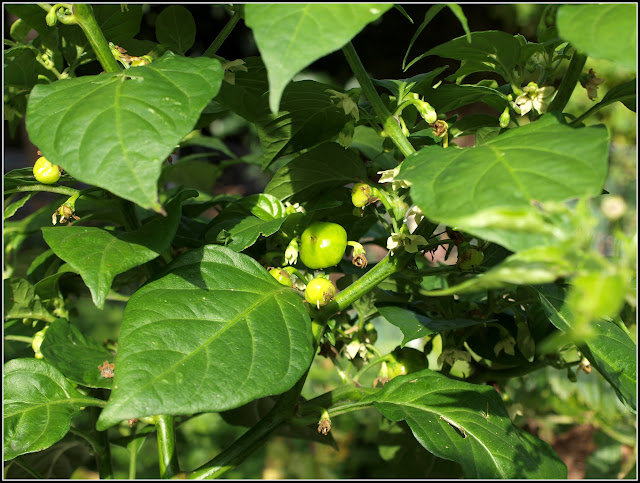 And what am I to make of this "Bird's Eye" one? 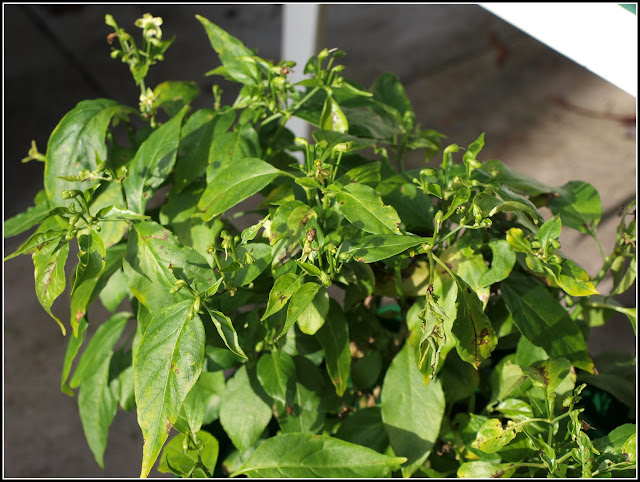 This plant is in its second full year but it has not done well again. Last year it produced the grand total of 3 (tiny) ripe fruit, but I gave it another chance because it has an interesting history. I grew it from seeds taken from a dried chilli that snuck by mistake into a consignment of chilli-themed condiments. This year the plant has never looked healthy. Its leaves have been sickly and yellow, with many brown patches. It has produced lots of tiny greenish flowers, but none of them have set fruit. I think I may have to give up on this one. There are so many other varieties I would like to grow, so it seems silly to persevere with something so unpromising.

This though is a different story. This is "Blondie". 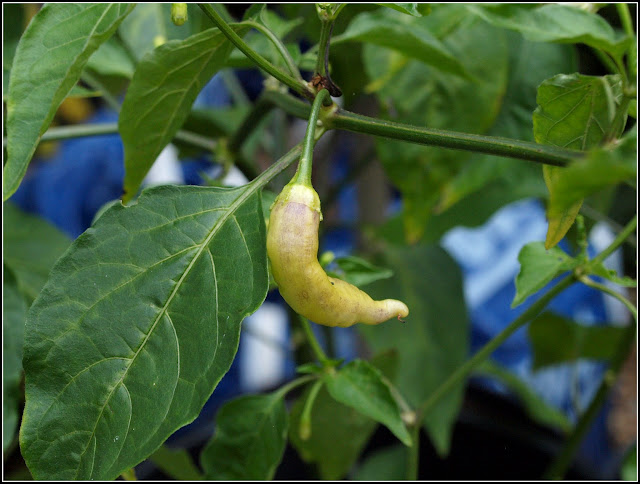 This is one that was given to me as a young plant by my friend Stephen at Victoriana Nursery Garden. It has done much better than one of the same variety that I have grown from seed - which is big and leggy, but only belatedly flowering and has not set any fruit. I think these fruits are just about ripe, but without prior experience with one so pale I'm not sure. 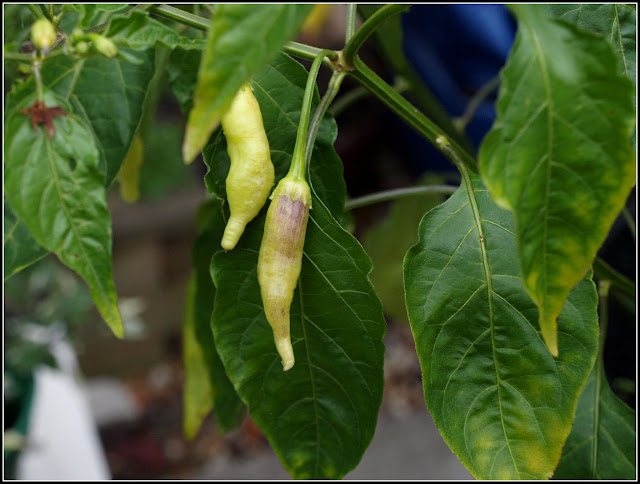 The "Rocoto" is one that I have not managed to find room for indoors. It is quite a sprawling plant and would take up more space than I can afford. Besides, I think that given another couple of frost-free weeks it might produce some ripe fruit. There are certainly plenty of them now: 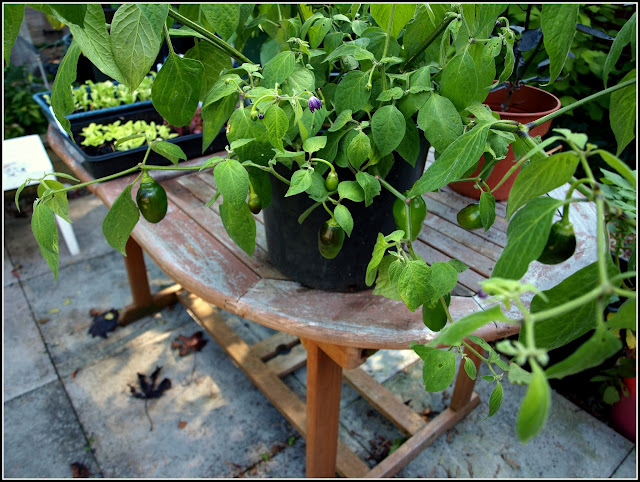 Some of them are definitely changing colour. If frost is forecast I may pick some of them and try to ripen them indoors. 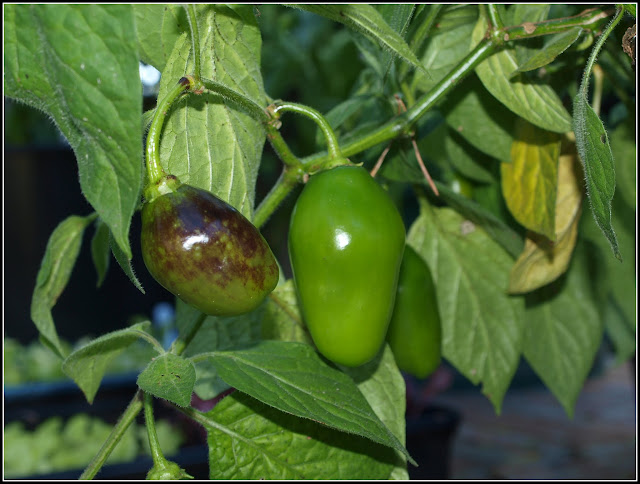 There is no way I can bring indoors the "Brazilian Starfish" plant. It is about four feet tall. However it has just produced its first ripe fruit - small but very welcome: 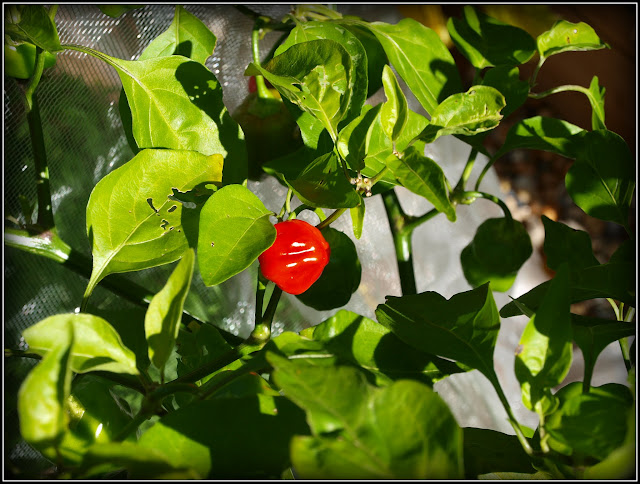 Some of the other fruits are just turning too. They are developing purple / brown streaks, which is a sign of approaching maturity. They are not very starfish-shaped, are they? More like miniature Sweet Peppers. 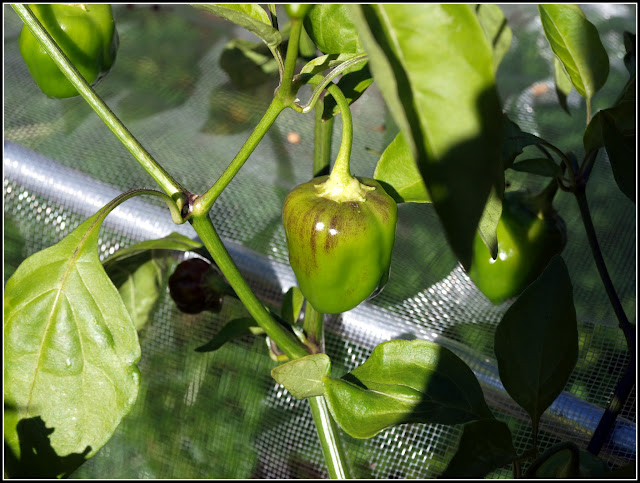 This is one of the lucky ones - "Aji Limon" - basking blissfully on the windowsill of our study. Just days after bringing it into the warmth the first signs of colour appeared. I'm hopeful that most of its fruit will make it to citrussy maturity. 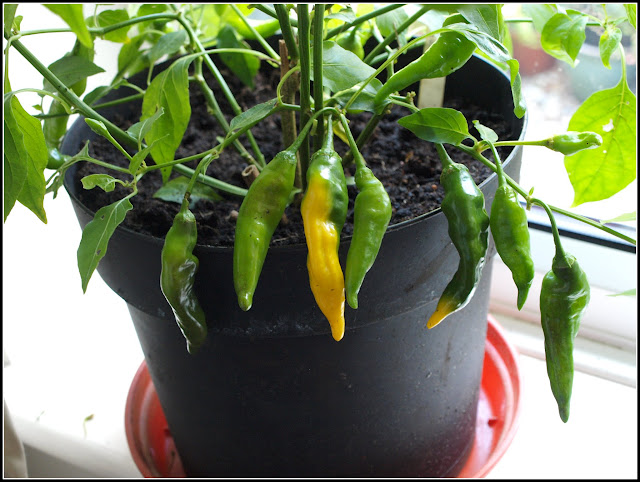