My big tomatoes are nearly ready. They ripen considerably later than the little cherry-type ones.


Maskotka, Primabella and Primavera have mostly been picked now. We have eaten loads of them, but I still have some ripening indoors:- 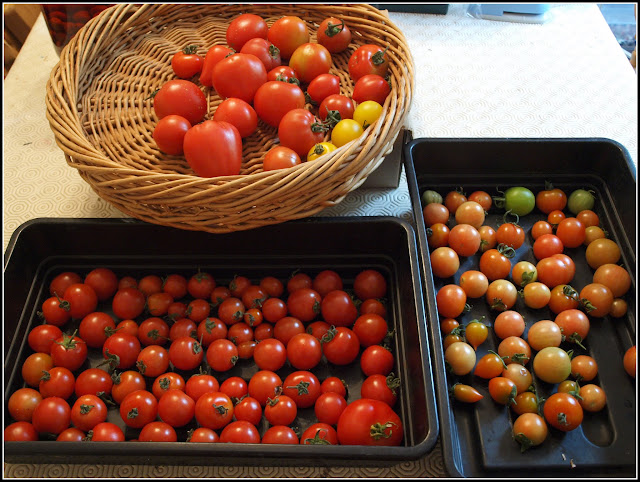 One disadvantage of my favourite Maskotka is that it is a trailing type, apparently bred for growing in hanging baskets, so when grown in tubs its branches do tend to rest on the ground, making them vulnerable to slugs. This is why I often pick fruits that are not fully ripe, and finish them off indoors. The slugs seldom attack any fruit that is less than fully ripe (fussy little things!).

Since the outdoor temperatures are already pretty chilly by tomato standards (about 15 Celsius during the day and 8 or 9 at night), I may soon bring some of the big tomatoes in too. For now though I'll just regale you with a few photos of them on their vines:


Unfortunately the Larisa fruit seen in the last photo was not edible. It had gone completely soft, rotting from the inside. I think you can tell that from the photo. A real pity, because it had the classic heart shape of this variety and was looking good until a couple of days ago.

Many of the big beefsteak varieties have ugly, misshapen fruits, often with dry patches on their shoulders and around their stems. This makes them a bit less attractive as salad tomatoes, but I plan to use most of them for making sauce anyway, so looks will not be important. Having said that, you couldn't ask for a more regular tomato than this one:

It's hard to get an idea of its size from that photo, but it is pretty big. I would say it's likely to weigh more than 250 grams. When it is ripe it will be a good one for slicing.
Posted by Mark Willis at 12:00