I am on my own at present. Jane is over in France, meeting our new baby grandson, Owen Mark, and doing all sorts of granny stuff. Meanwhile I am home alone. :(  This means going out to work as usual, but also having to make my own dinner when I get home. I haven't had the opportunity to write much or to do much photography, so this post is necessarily going to be very brief.

Of course I have been looking for things I can cook quickly and easily. One such dinner was this Chinese-style one: 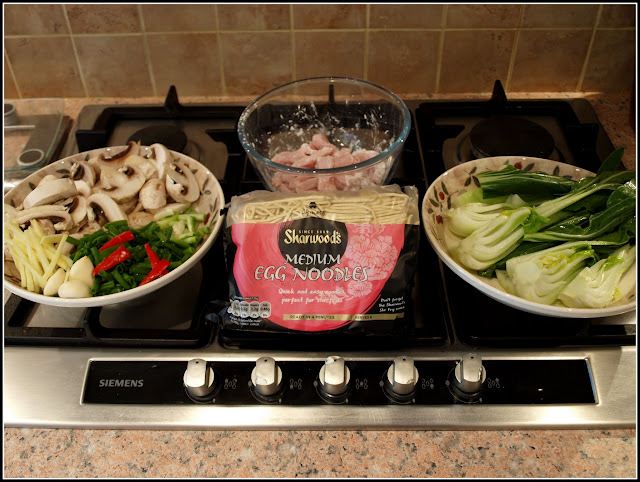 My meal was ready-made egg noodles, accompanied by pork and mushrooms stir-fried in the wok, with a separate dish of braised Pak Choi. Jane dislikes oriental veg like Pak Choi, so I only get to eat it while she is away!

"Quick and easy" is a relative term, and I wasn't going to compromise on flavours, so still wanted to include the usual garlic, ginger, Spring Onions (home-grown, no less) and chilli. I was able to use a fresh chilli from my own "Cayenne" plant. Here is a pic of the fruits I harvested on Sunday: 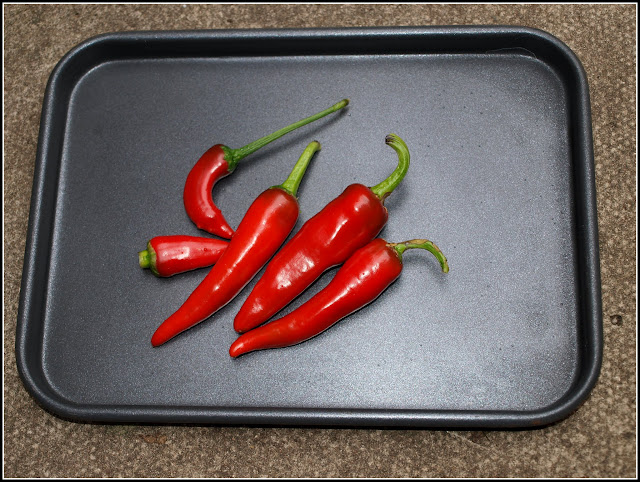 In Chinese cuisine, cooking times are often short (especially when stir-frying), but preparation times tend to be longer. For instance, I spent some time peeling and "julienning" my fresh ginger - that is to say cutting it into very narrow strips, like matchsticks.  When stir-frying it is a good idea to cut the ingredients into small pieces so that they cook quickly.

Another trick we use with meat that is to be stir-fried is to coat it in cornflour. This helps to preserve its texture, stopping it going dry on the outside before it is cooked on the inside. The cornflour acts as a protective covering. (You can see the floured pork strips in my top photo).

My last tip is this: if you plan to cook Chinese food more than once in a while, get some Shao Hsing, aka Shaoxing, rice wine (it's a little like sherry). Putting a splash of this stuff into a stir-fry certainly adds a little "Je ne sais quoi". And it's very authentic too.

Anyway, I have to go now. Hopefully I'll be out in the garden again soon, and blogging of course. Bye for now....
Posted by Mark Willis at 12:00