No, I don't mean that I have a herbal remedy to offer. I mean that some of my herbs need a remedy!

I have some pots of Thyme that are looking very sorry for themselves. They have lost their fresh colour and now look grey and desiccated. 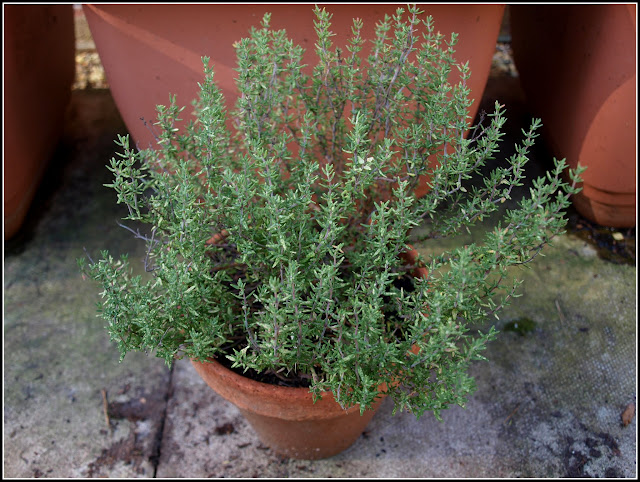 The upper surfaces of their leaves are scarred and full of little white patches. Something has definitely been nibbling them 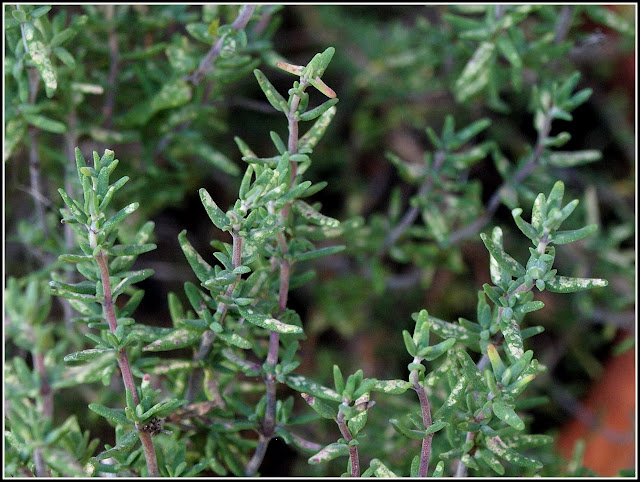 I don't know what has caused this, and close inspection has not revealed any bugs, but I have a suspicion that the culprits may be Capsid Bugs - the same ones that made all those holes in my cucumber and chilli plants. Has anyone else got any theories on this? Please tell me if you know of any suitable remedies.

Fortunately some of the other herbs are in much better condition! A couple of weeks ago I cut back the tired old growth of some of my potted Mint, which has prompted the production of some lovely fresh green leaves: 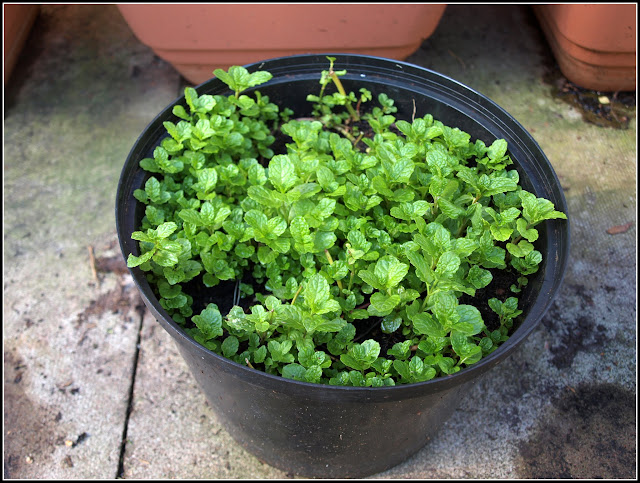 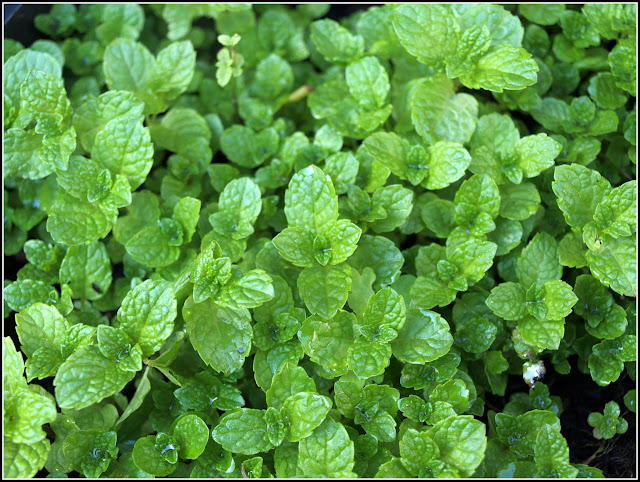 Some of the Lemon Balm has had the same treatment. This plant is closely related to Mint, and responds in the same way to severe pruning. This mature clump of Lemon Balm, no longer looks attractive: 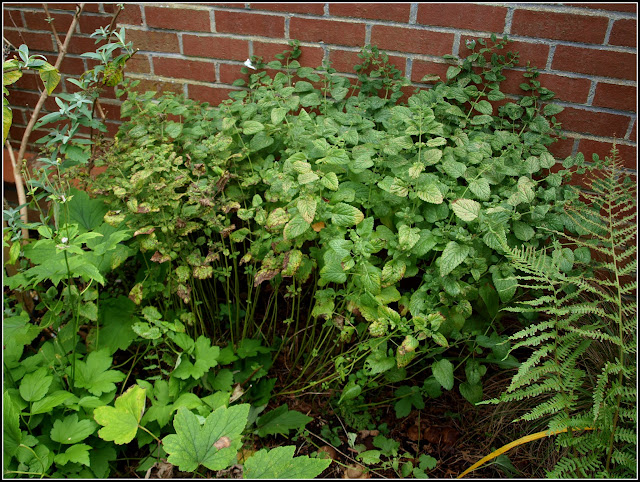 That's better. A clump of re-sprouting Lemon Balm a week or so after pruning: 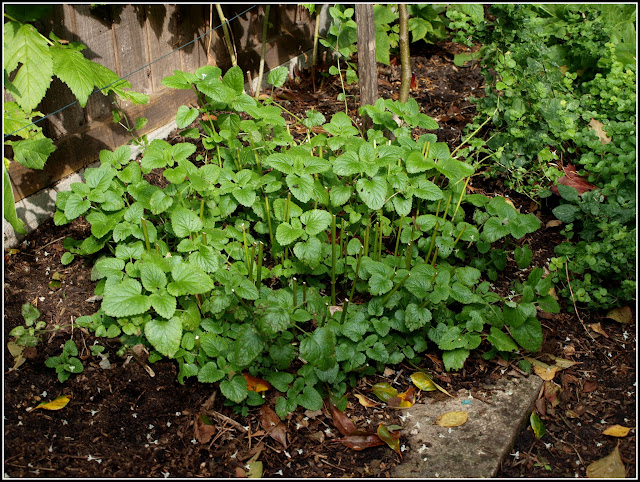 Last year I got a collection of herb plants from Rocket Gardens. One of them was a Flat-leaved Parsley. In fact it was a whole bunch of rather thin and straggly plants, and I was dubious about whether they would do anything much. However, they did survive and we did crop them a bit, but now they have come to the end of their lives (Parsley is a biennial, as you probably know). Here you can see the clump of Parsley tied loosely to a bamboo cane for support. 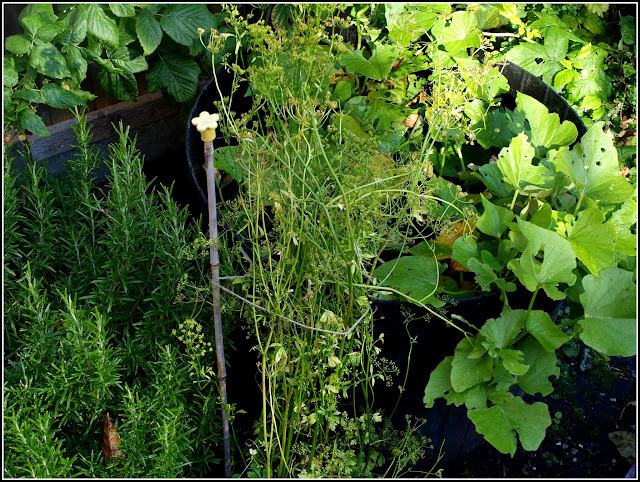 Even with support, the tall stems droop sinuously over the container of Sweet Potatoes behind them, and wave about in the wind. 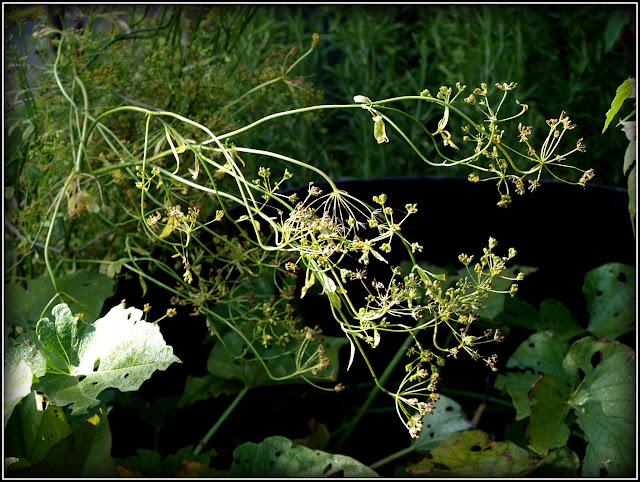 Where the flowers once were there is now a multitude of little seeds forming. 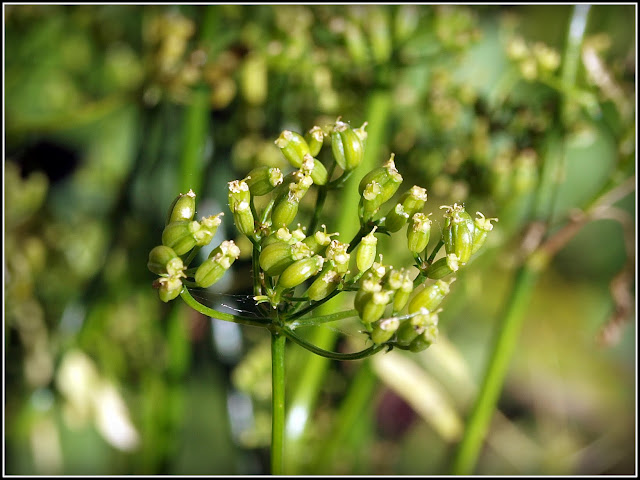 Rather than cut off these seed-heads I am leaving them in place, in the hope that they will eventually mature and fall to the ground, and maybe go on to produce another generation of Parsley plants. 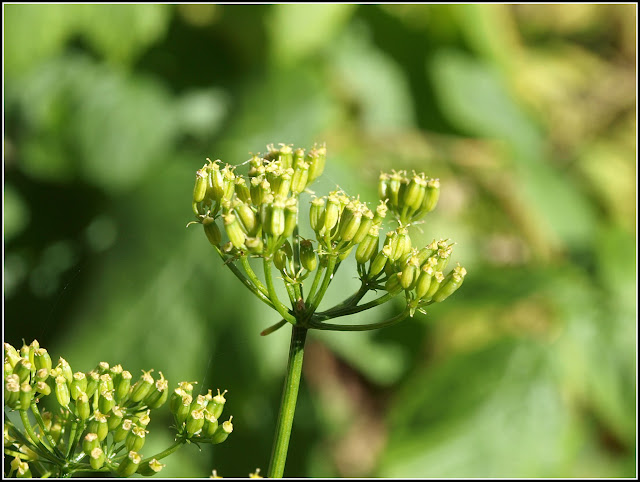 Nearby lives this Oregano, one of the most prolific self propagators known to man! 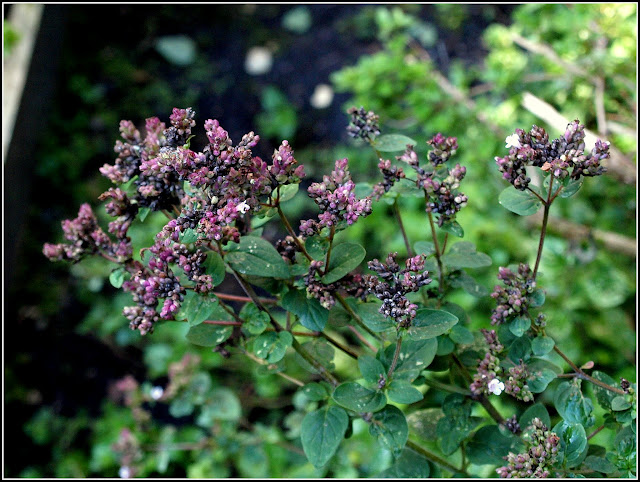 As you can see, the flowers of this plant are (were) purple, which gives the lie to the assertion that it is Greek Oregano (which has white flowers), as the seed-supplier would have me believe. I have written previously about my disappointment with this plant, which looks nice enough and is very popular with bees, but has very little culinary value since it is practically tasteless. I have already taken steps to remedy the situation, in that I have bought a packet of "true" Greek Oregano seeds to sow next Spring. They are "Greek Oregano. Origanum vulgare, subsp. hirtum", described as an "Aromatic culinary herb. White flowers, produced in Summer". Sounds hopeful...

In the garage at present I have a couple of pots of herb cuttings (covered with clear plastic bags to help maintain humidity). 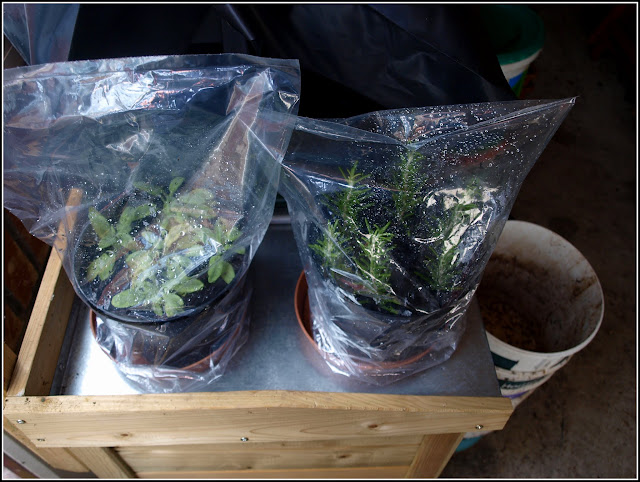 That's one each of Variegated Sage and Rosemary. 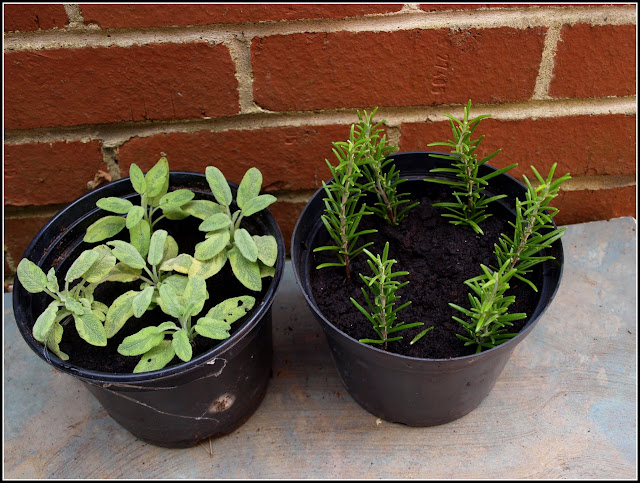 Woody herbs like these two go very straggly after a few years, so I take cuttings from them every so often, to make sure I have always got some new ones coming along. This next photo shows some Sage grown from cuttings taken this time last year. A bit yellow at this time of year, but looking strong nonetheless. 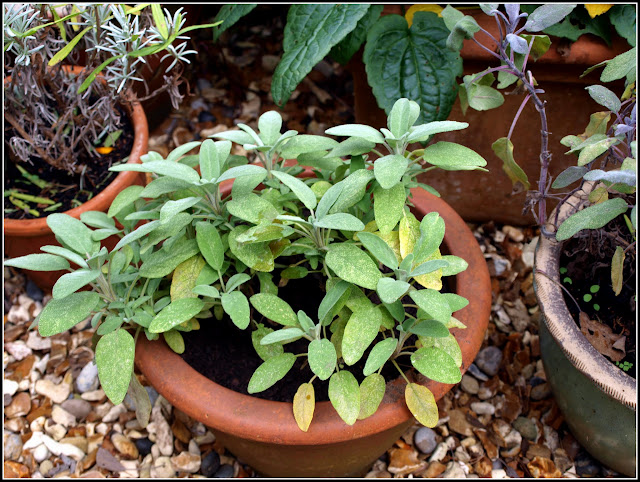 Well, there you are then. Apart from the Thyme, the herbs look OK. It's just a bit of a shame that Thyme is probably our most frequently used herb. I think I shall have to look out for some more of those £1.25 pots of Living Herbs from Morrisons.
Posted by Mark Willis at 12:00