My main harvests this week have been Runner Beans and Tomatoes, with a few of the purple Kew Blue climbing French Beans: 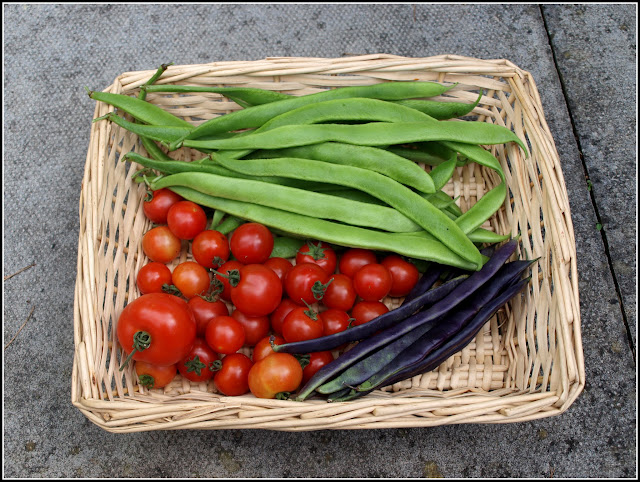 The batch of Runner Beans pictured here weighed 650g. I'm not sure what the overall tally of beans is, because I don't always remember to record the weight of what I pick, but my feeling is that this year has been "pretty good" for beans. 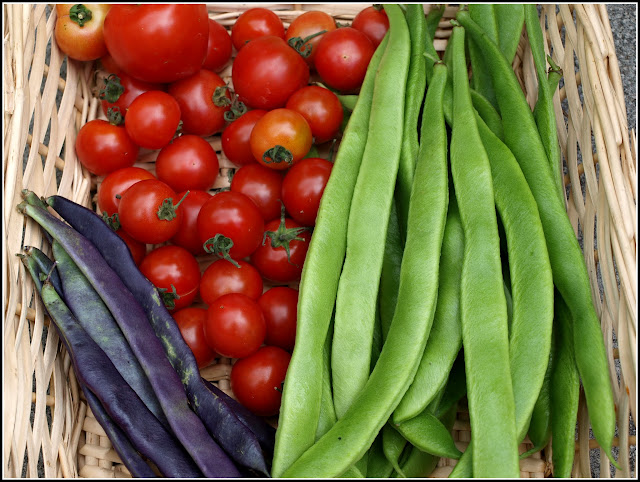 At present I'm picking a batch of Runner Beans about twice a week. This is Saturday's batch. It weighed 564g. 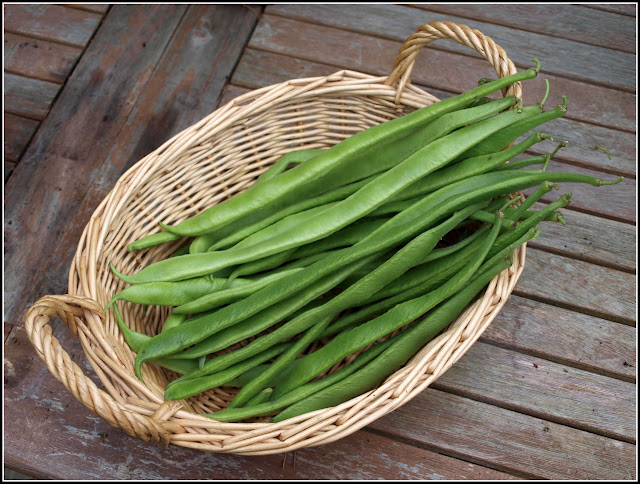 I also picked what is probably the last little batch of Blueberries for this year. 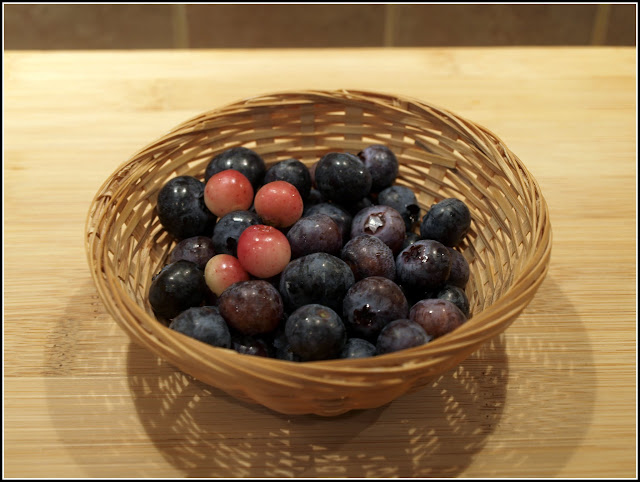 Earlier this year I re-potted my Blueberry plants and pruned them very hard, so this year they have not produced many berries, but next year they should be good. 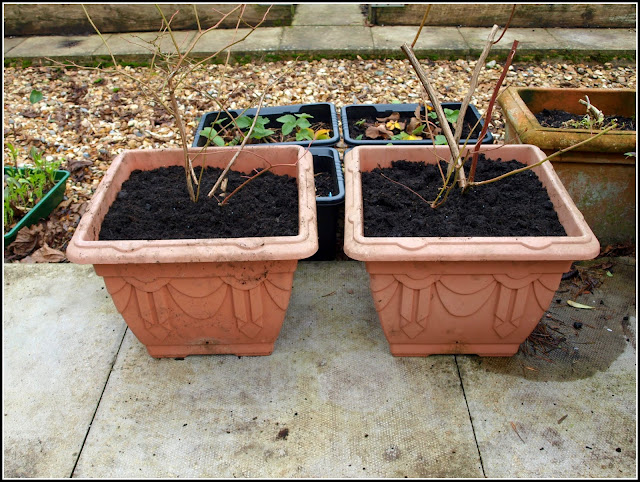 And here are the same plants on 4th September: 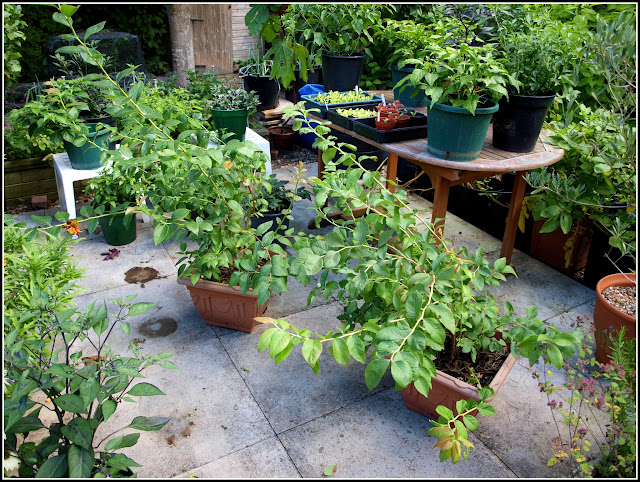 Some of the new branches are about six feet long, so I think I am going to prune them back a bit to keep them reasonably compact. This is not something I really want to do, because Blueberries fruit on new wood, but if I don't prune them they will be very difficult to net next Summer. A compromise is called for!

My "Autumn Bliss" Raspberries are not very blissful this year. Something ate most of their growing-tips in early Summer, which set them back a lot. However they have re-grown and are just beginning to deliver a small quantity of fruit. I know from experience that they will probably be able to keep going for another couple of months. 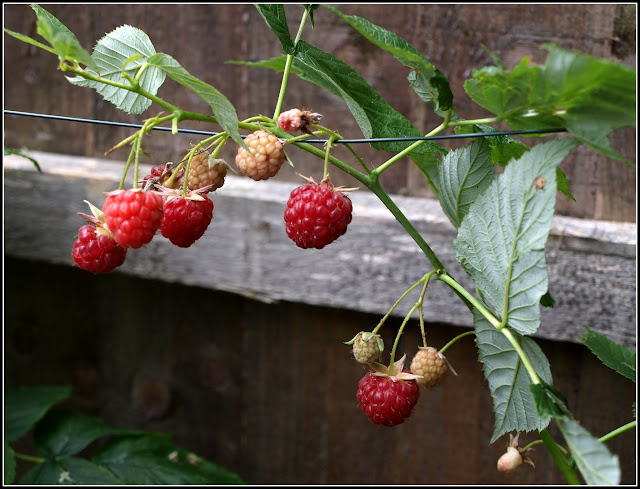 The yield however is currently pathetically small: 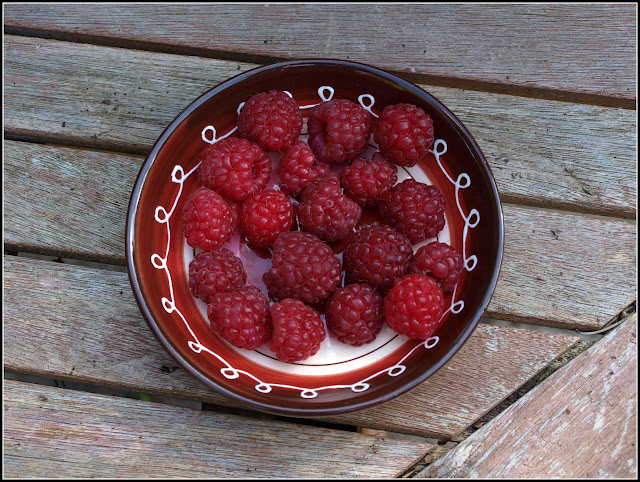 Yesterday I dug up the first lot of "Pink Fir Apple" potatoes (after these I have 3 more pots of them). 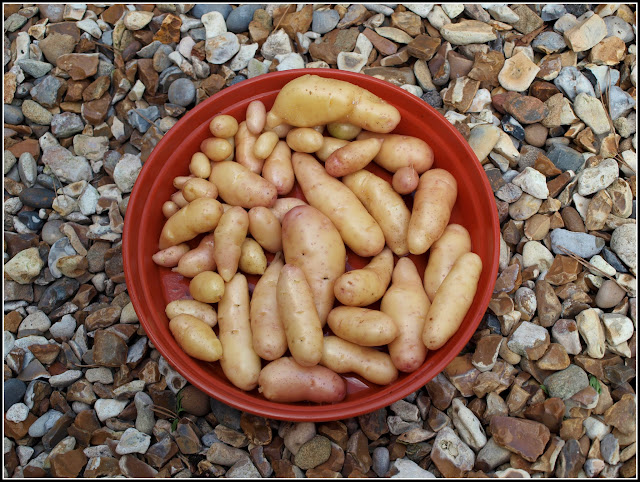 I got 730 grams from the one pot (one seed tuber), which is quite good. I find that PFA never produces a huge crop. However there were lots of little tiny tubers, and I'm sure that if I had waited another three or four weeks I would have had a much heavier yield. For me though the pleasure of getting some young tasty tubers when I want them is infinitely more important than waiting a bit longer just in order to get a greater "score". These are definitely gourmet spuds. 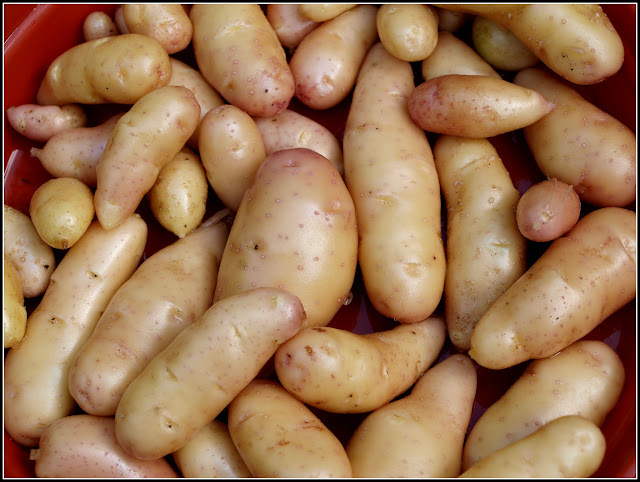 Also on Sunday I pulled up the last of my Beetroot and some more Carrots. 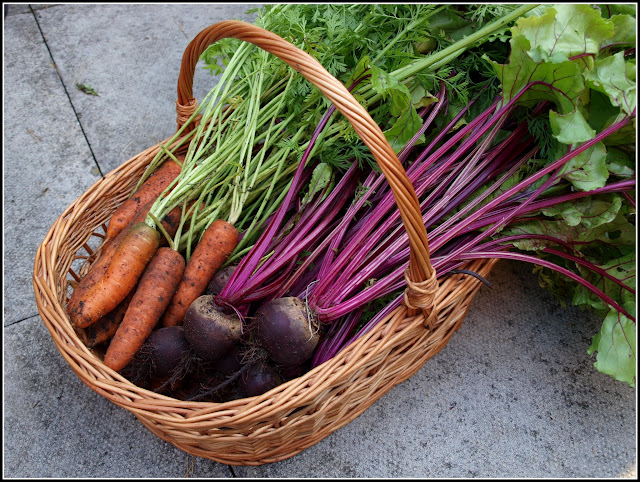 The Beetroot had been in the ground a long time and were in danger of going woody. I didn't think there were many left, but I actually found 11. Most of them were the "Boltardy" type, which has done well again. This is a really reliable variety. The others were "Baby Beet Action" and they have done nowhere near so well. 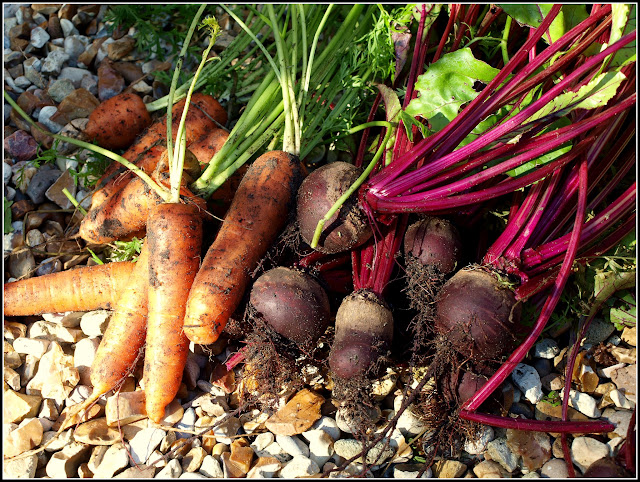 I have been very pleased with the Carrots, especially that new trial variety "Kelly", which has produced some excellent roots - big, regular-shaped and tasty. And the best thing is that I have loads more to come! 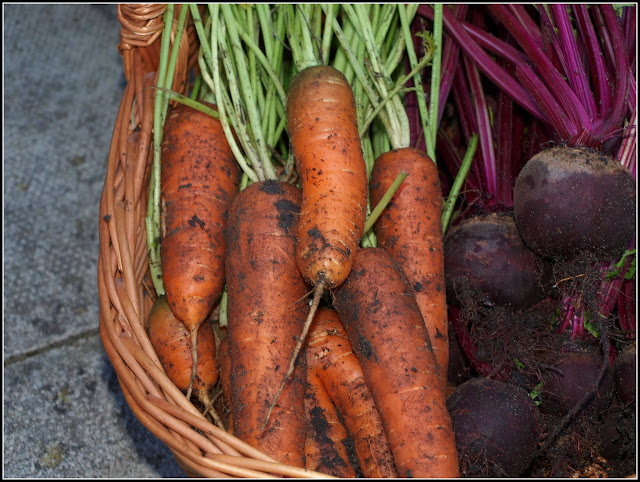 I decided to pick some of the big Beefsteak-style tomatoes, and bring them indoors to ripen in the warmth of the house. Of course after a lengthy spell of gloomy cold weather, the day after I picked those tomatoes we got a beautiful classic September day - bright and sunny. So out into the garden again went my tomatoes, this time in a basket which I moved around several times during the course of the day to ensure it was in full sun for as long as possible: 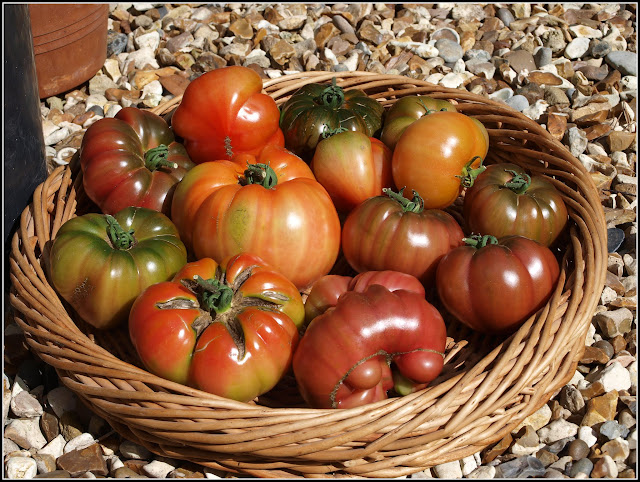 Well that's my harvests for the week (I'll not mention the Lettuces...). Why not head over to Daphne's Dandelions now to see what everyone else is offering for Harvest Monday?
Posted by Mark Willis at 12:00