This past week it has been "National Pie Week" here in the UK. Who decides these things I really don't know, and they are so common that I normally ignore them, but on this occasion I fancied a pie and I used the National Pie Week as an excuse! 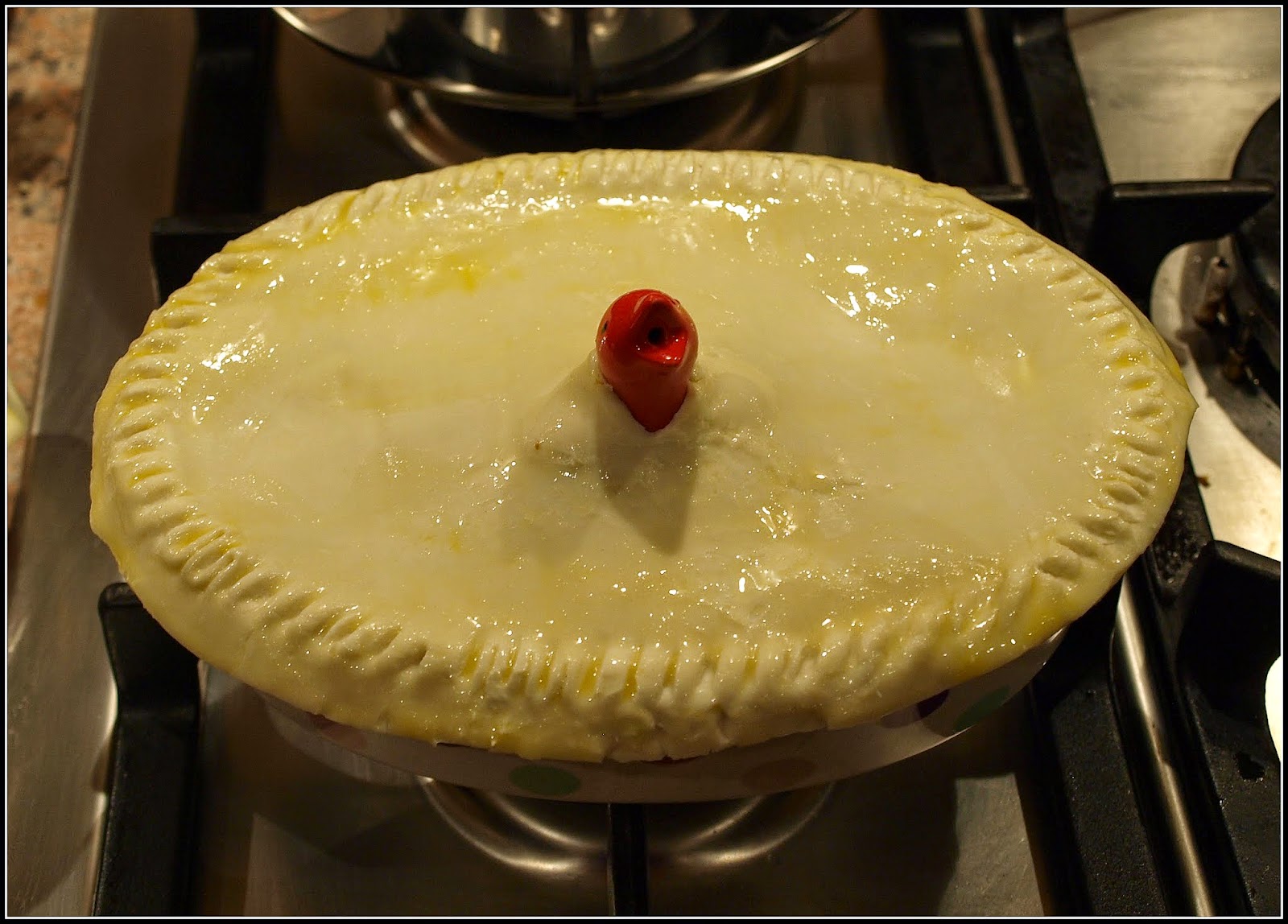 I am by no means an expert on pie-making (I think I have only ever made one before, my "Cornish Pasty Pie"),  but I have a good mentor - my wife Jane - so although I did all the work myself, I did ask for advice a few times.

The first step was to make the filling, which is exactly the same as making a casserole, at which I am pretty good, so that was no trouble at all. I used beef, onions, mushrooms, garlic and ale. We happened to have a bottle of Marston's Pedigree Pale Ale hanging around (neither of us drinks beer, but we usually keep some in for guests), so it was this that provided the liquid for the casserole. It gave the meat a really nice sweet flavour. When the casserole was cooked (about 2 hours on 160C), I left it to cool and hen decanted it into two individual pie-dishes: 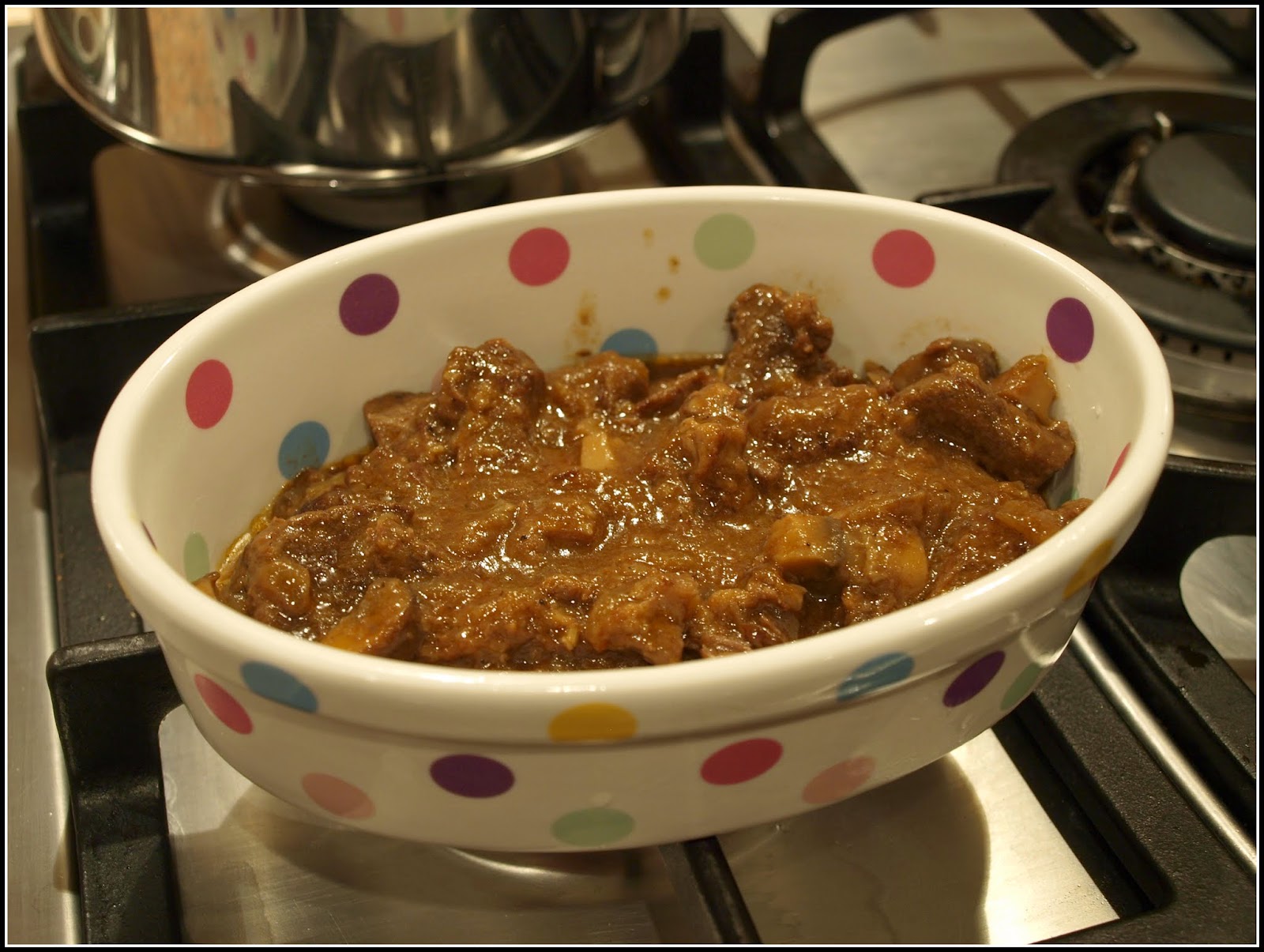 For some indefinable reason I had set my heart on using those two dishes, but Jane tells me (afterwards, you note!) that they are really gratin-dishes, not pie-dishes at all. Apparently pie-dishes have a flat rim around the edge to make it easier to secure the pastry. I'll remember that.

The pastry element of the pie was applied shortly before cooking. I used pre-rolled ready-made puff pastry, a true convenience food! Earlier I had cut two oblongs of pastry and put them into the fridge to chill. Then at the right moment I got them out and applied them to the "pie-dishes". I used our little Blackbird-shaped pie-funnels to stop the pastry collapsing onto the filling. The final step was to apply a layer of beaten egg to give the pastry a golden sheen. 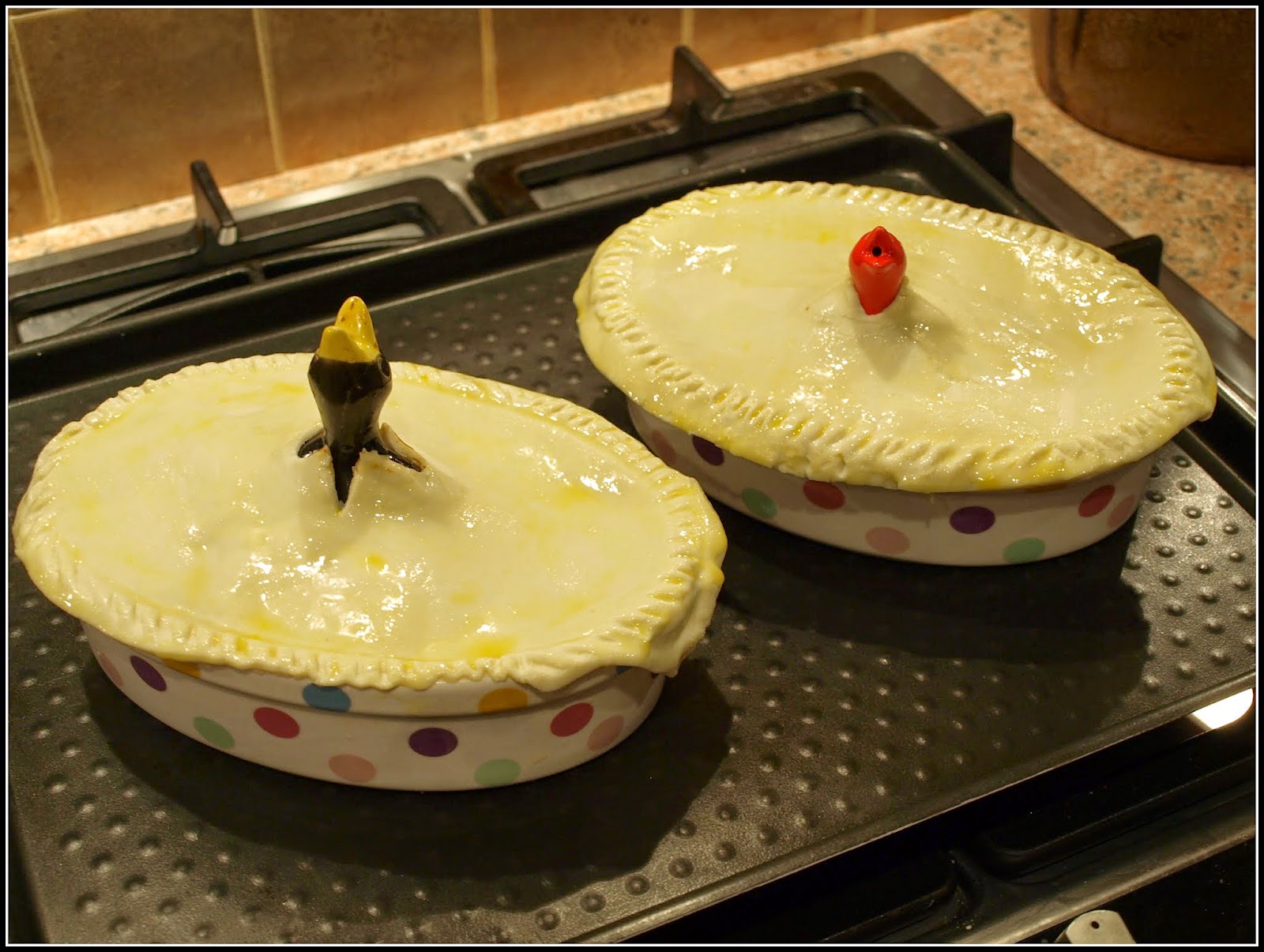 Not the neatest result, perhaps, but not bad for a beginner. The alignment and crimping of the nearest one went a bit awry, and I paid the penalty for this later.

My pies cooked at 190C for about 25 minutes. Deciding when they are done is a matter of fine judgement. You want the pastry to be fully cooked, not at all soggy, but it also doesn't want to be burned. I stood and watched the final few minutes, in true GBBO style. 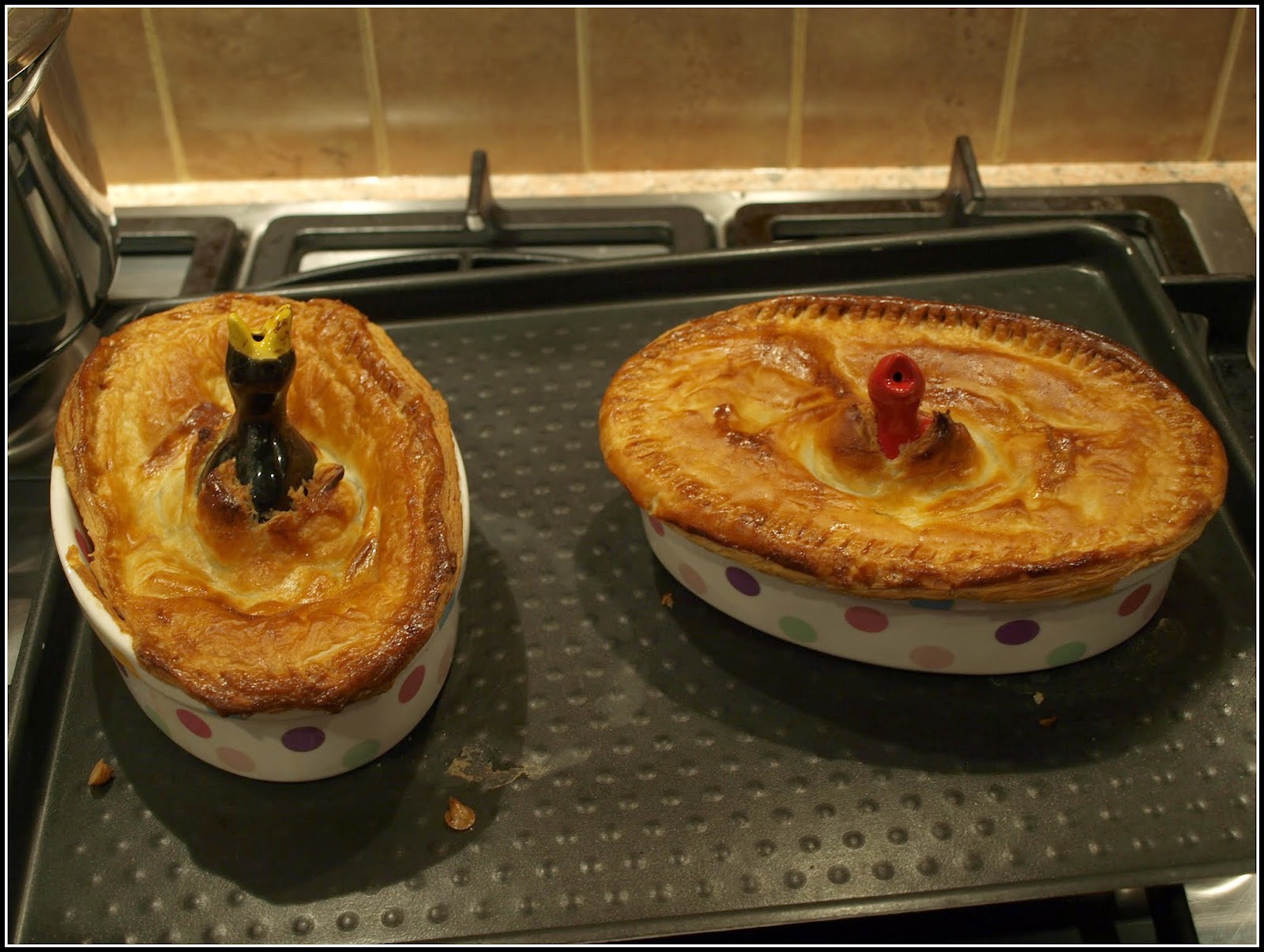 You can see that the edge of the one at the left came adrift due to my earlier poor alignment of the pastry and inadequate crimping, which meant that the top sank a bit, but no real harm was done. The other pie was much neater. 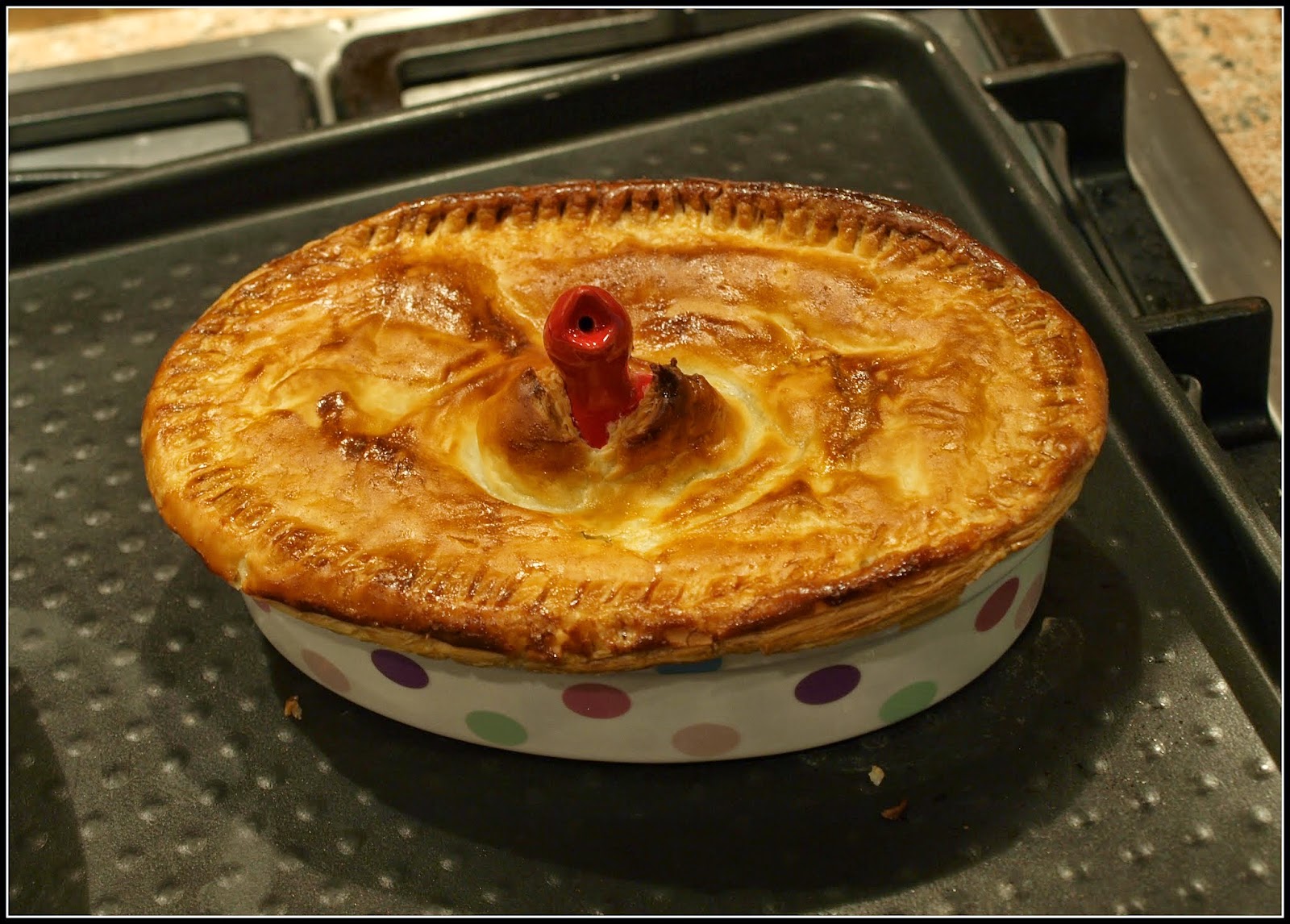 Funnily enough, there are no photos of the insides of the finished product. This is because we were so keen to get stuck in and eat them. Suffice it to say that we were both pretty happy with their taste and texture. The meat cooked in ale was particularly tender.

I do have a photo of the accompaniments though. This is roasted Butternut Squash and potato wedges with (home-grown) Paprika, cooked with olive oil. 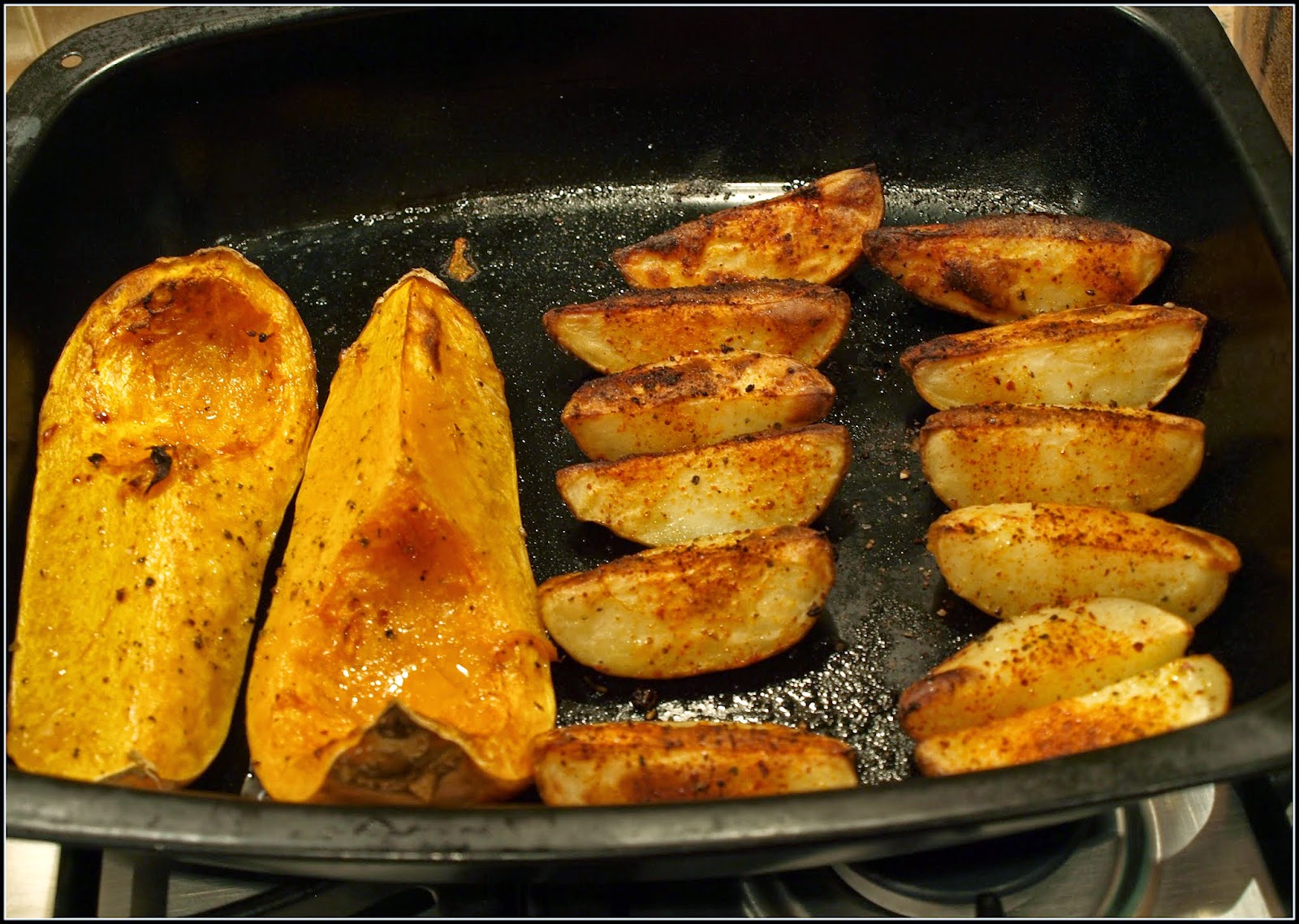 When making the pie-toppings there were a few offcuts of pastry left over, and I made these into "Cheese and Onion" triangles, using a spare half of a red onion which I found in the fridge and a little grated Parmesan cheese. We had these with our pre-dinner drinks: 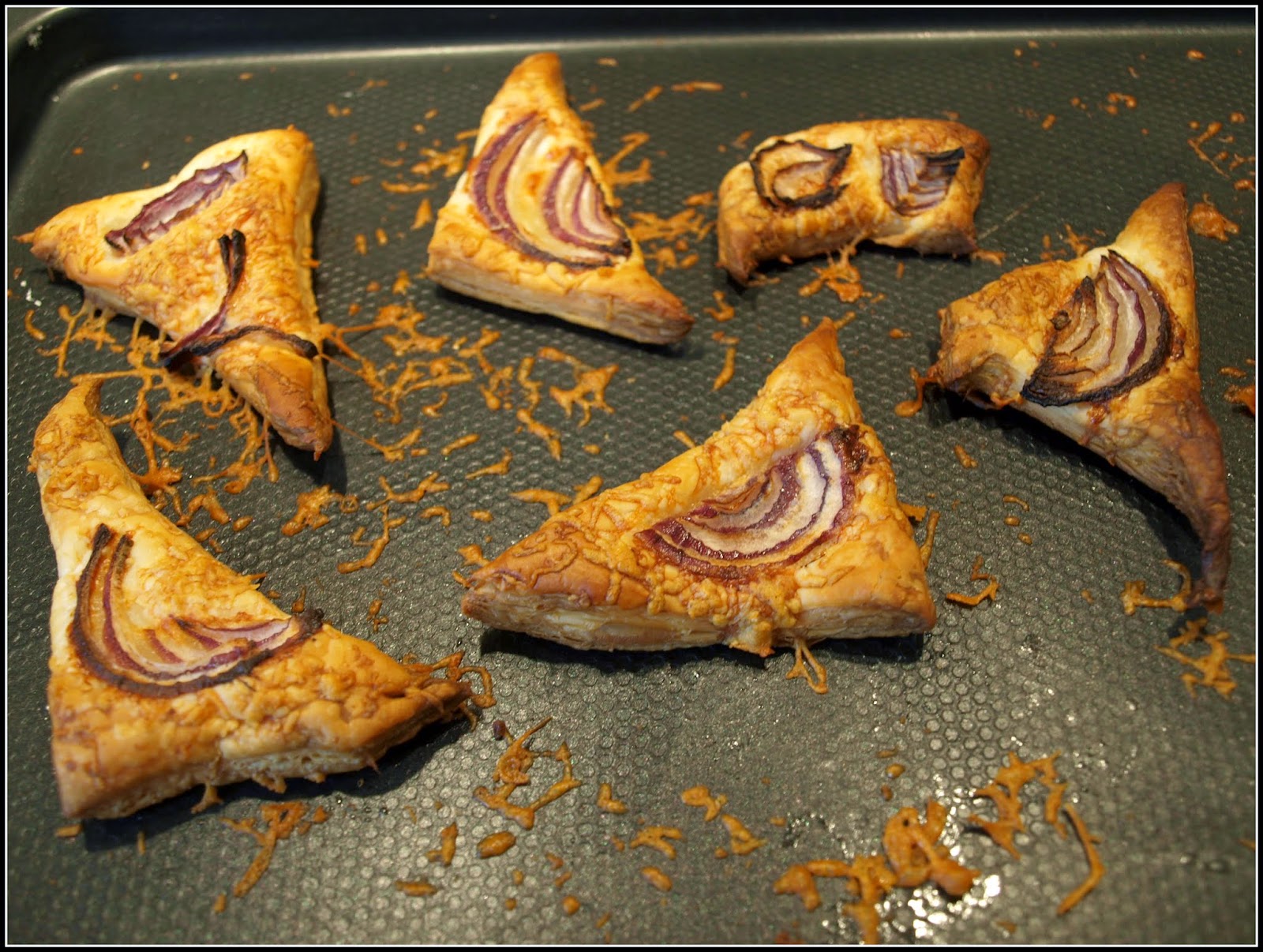 So then, my craving for a pie was duly satisfied - and I learned a few things about pie-making too! Next time maybe I'll be able to "go solo"...
Posted by Mark Willis at 12:00