Yesterday, Jane and I joined forces to produce a Malaysian meal. Its preparation was far from simple and involved lots of stages, but we had all day available, and we actually enjoy cooking so it was no penance for us. As an aside though, let me say that I'm glad we have a dishwasher: I think we ran it 3 times yesterday! 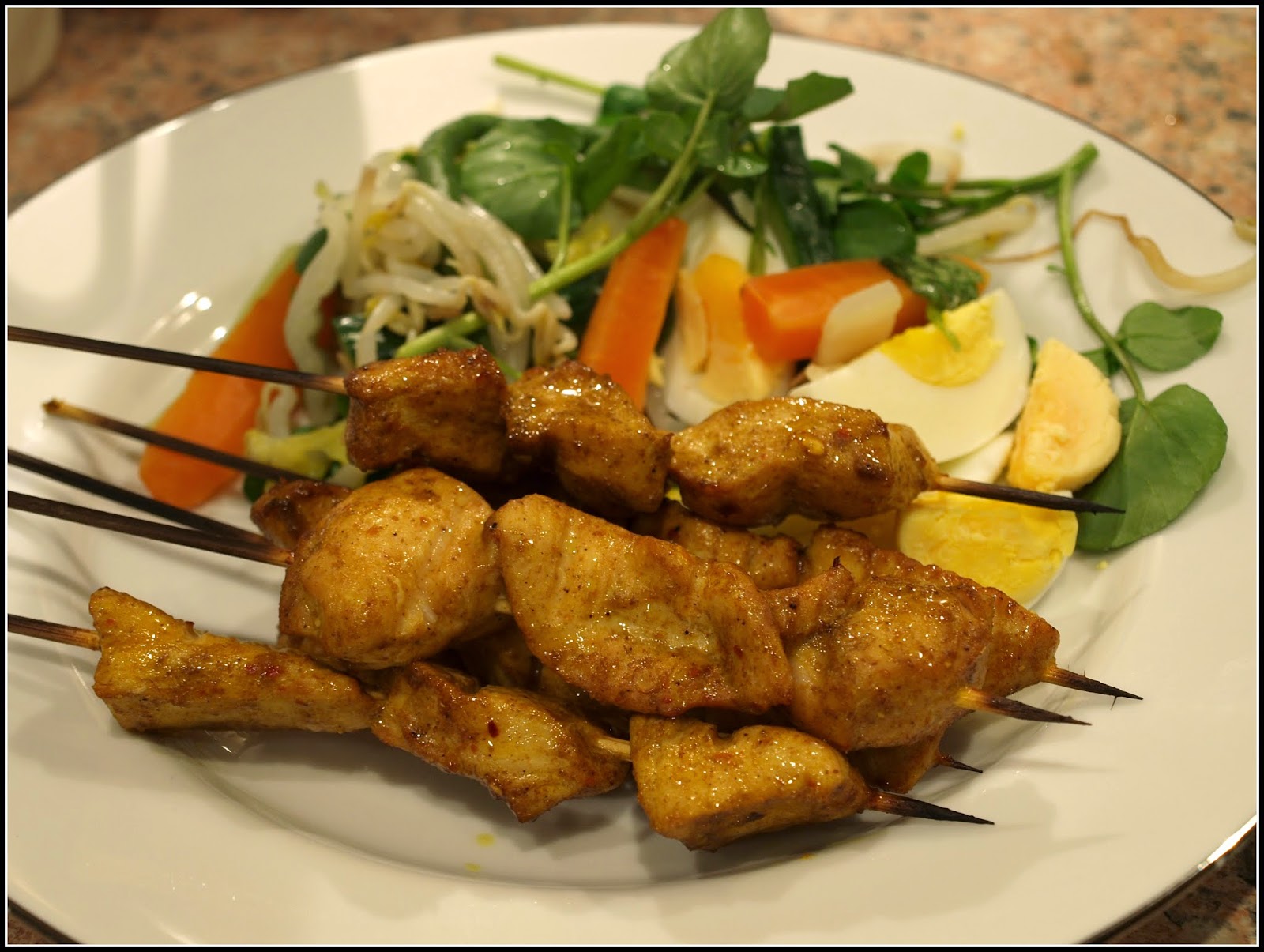 Many readers will know that I was born in Malaysia. My family lived in Ipoh. One of our regular destinations for holidays was the island of Penang, which I loved so much that when I married and had children I took my own family back there  - and they loved it just as much. Penang is a real melting-pot of cultures and gives you easy access to a very wide spectrum of different food styles, ranging from Malay to Chinese, through Indian and Nonya, and even Orang Asli! Our interest in Malaysian cuisine was recently re-invigorated by watching Rachel Khoo's episode of "A Cook Abroad", in which she went back to the country to re-visit her roots. We found it very inspiring.

One of things I really wanted to try making was Roti Canai, a sort of half bread / half pastry flatbread affair, typically served with a rich dipping sauce or gravy. Although we have eaten it once or twice in restaurants we had never made it before. Anyway, as often happens, the internet came to our rescue and we found a very easy and profusely-illustrated recipe for it. If you feel like giving it a go yourself, HERE's a link.

We were too busy following the recipe to take many pictures, but here's one of some roti cooking. You cook it in a frying-pan greased with butter: 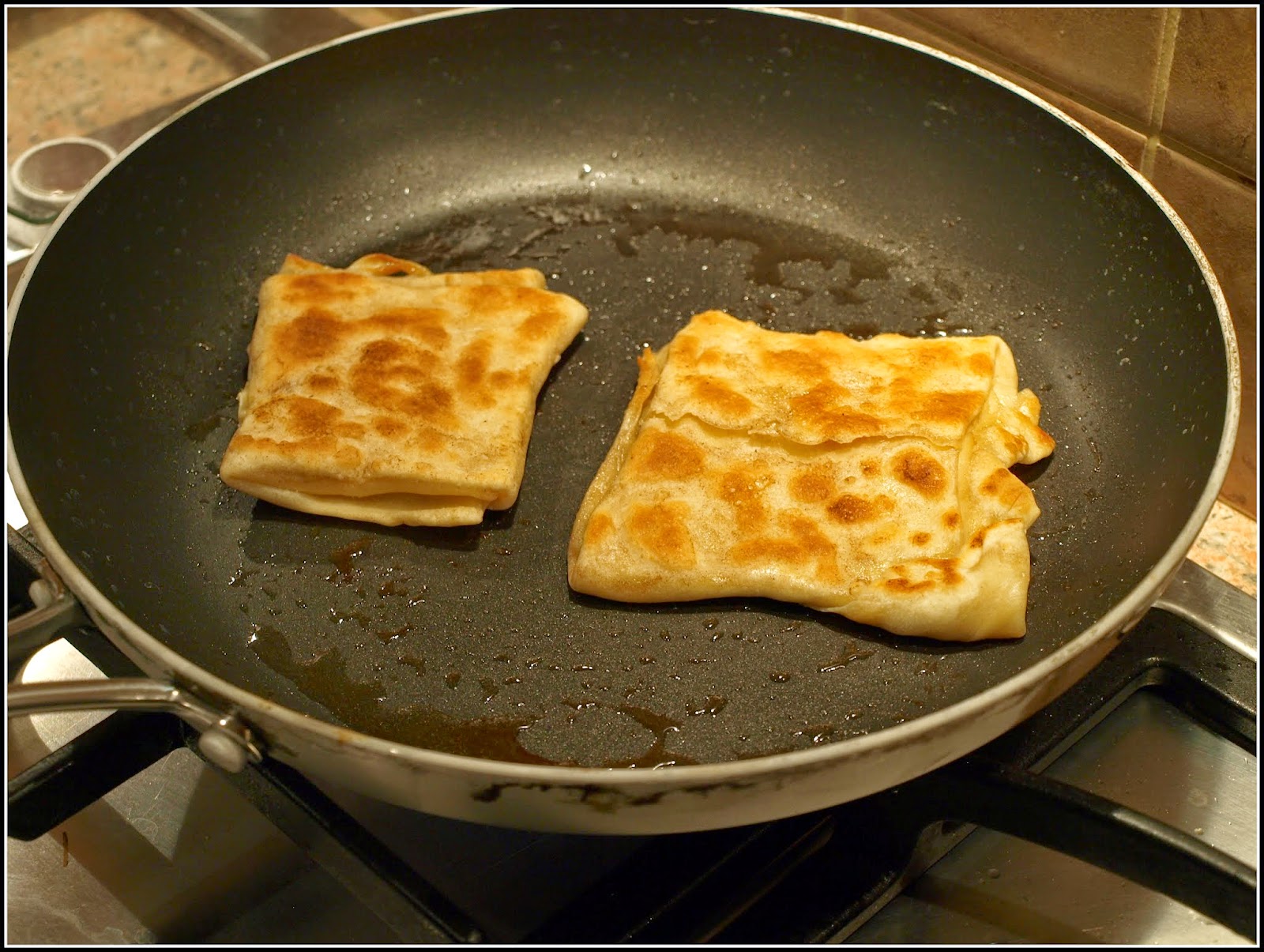 Since it is rolled, stretched and folded over, the roti comes out very much like puff pastry - layers of crispy deliciousness, from which you tear off chunks and dip them in your sauce.

I concocted the sauce myself, without a recipe. I fried some onions in oil, mixed in some of Jane's special Hot Curry Powder, added some powdered turmeric, coriander and 5-Spice, some ground black pepper, a couple of chillis from the freezer (de-seeded), some crushed garlic, some grated fresh ginger, a spoonful of "All-Purpose Seasoning" (to give it a savoury saltiness), about 250ml of water and a small tin of coconut milk. After cooking it for a few minutes I blended the mixture in the food-processor to a smooth consistency and allowed it to cool before decanting it into a covered container to let the flavours develop. At dinner-time the sauce/gravy was reheated in a saucepan and served in individual bowls. 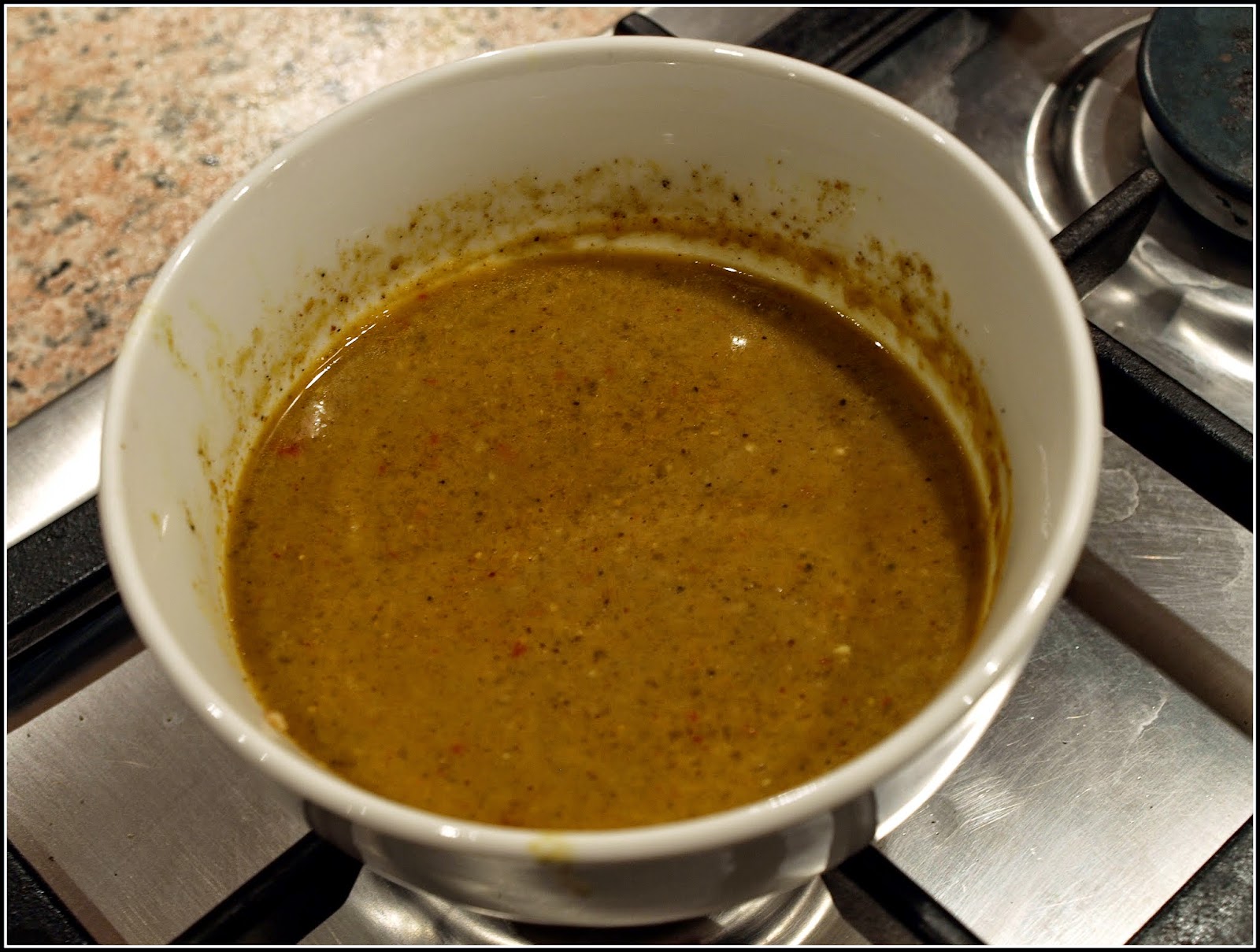 We both agreed that it tasted very Malaysian! Beautifully rich, spicy and savoury.

Meanwhile... You will have seen the picture of the chicken satay at the top of this post. The meat for this of course had to be cut into chunks and marinated in a spice mix for a few hours before threading onto bamboo skewers. Our marinade included groundnut (peanut) oil, soy sauce, turmeric (mainly for the colour), curry powder and a small splash of sesame oil. I deliberately cut the meat into quite big chunks, because this means they don't dry out when being grilled. Another useful tip is to soak the bamboo skewers in water for a while before threading them, which helps to stop them burning.

The vegetable element of our meal came in the form of Gado Gado. This is really an Indonesian dish, but in our household it would be unthinkable to serve satay without Gado Gado. The dish consists of a variety of lightly-cooked vegetables (we use green beans, carrots, beansprouts and Chinese cabbage), mixed in with raw cucumber and watercress and then topped with sliced boiled eggs. Fried tofu is another common addition. It is typically served with a thick peanut sauce - the same one which goes so nicely with satay. Jane uses a well-practised and very effective recipe for peanut sauce, which she has described on her blog Onions and Paper. 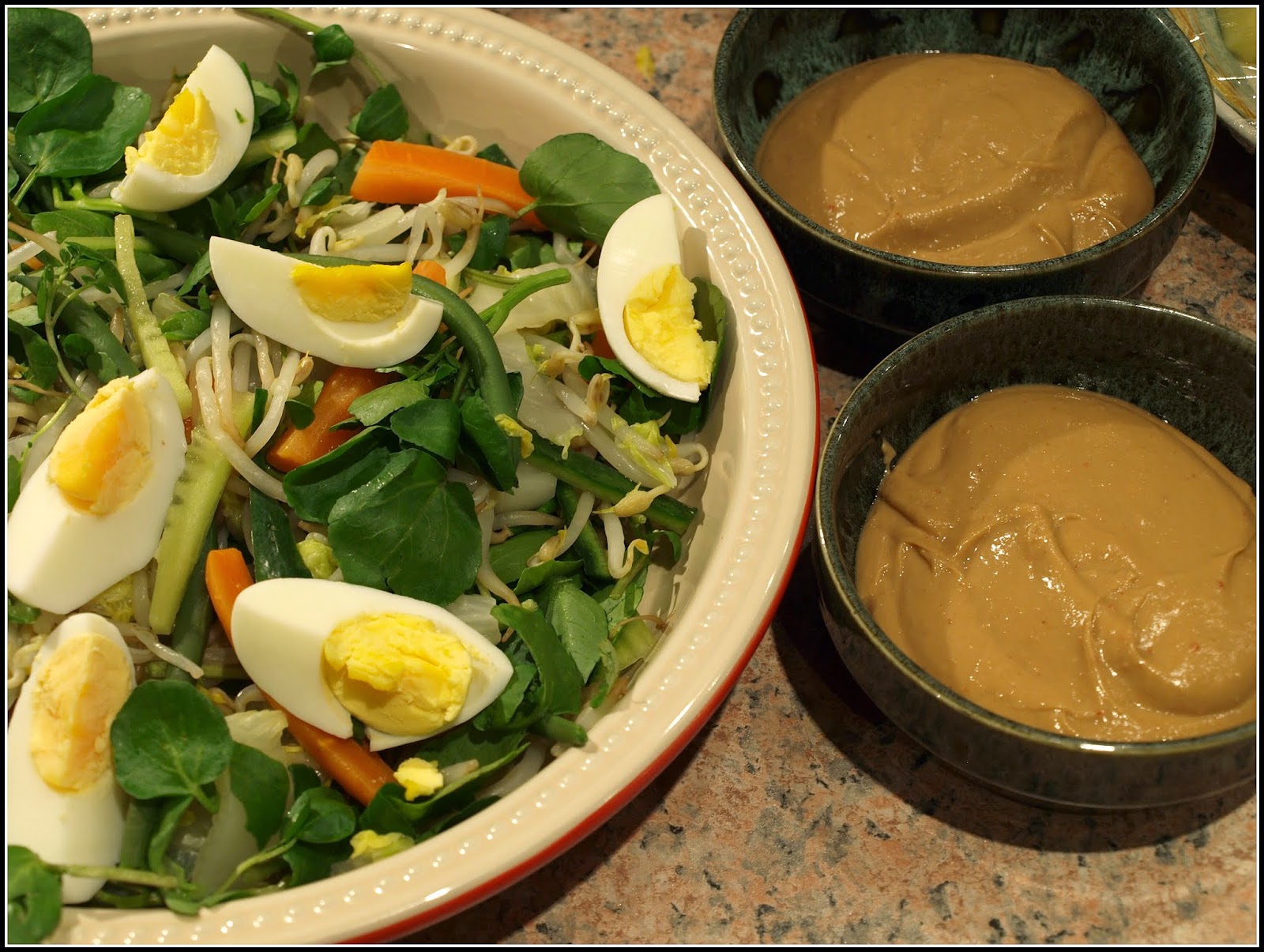 The final embellishment was some prawn crackers. In this next photo I have put some on top of the Gado Gado just for artistic effect. By the way, prawn crackers are ideal for scooping up the peanut sauce. Cooking prawn crackers is a joy in itself. It's fascinating to see them puff up in the hot oil, transforming from a dull shiny plastic-like disc into a fluffy white crisp in about 5 seconds flat! 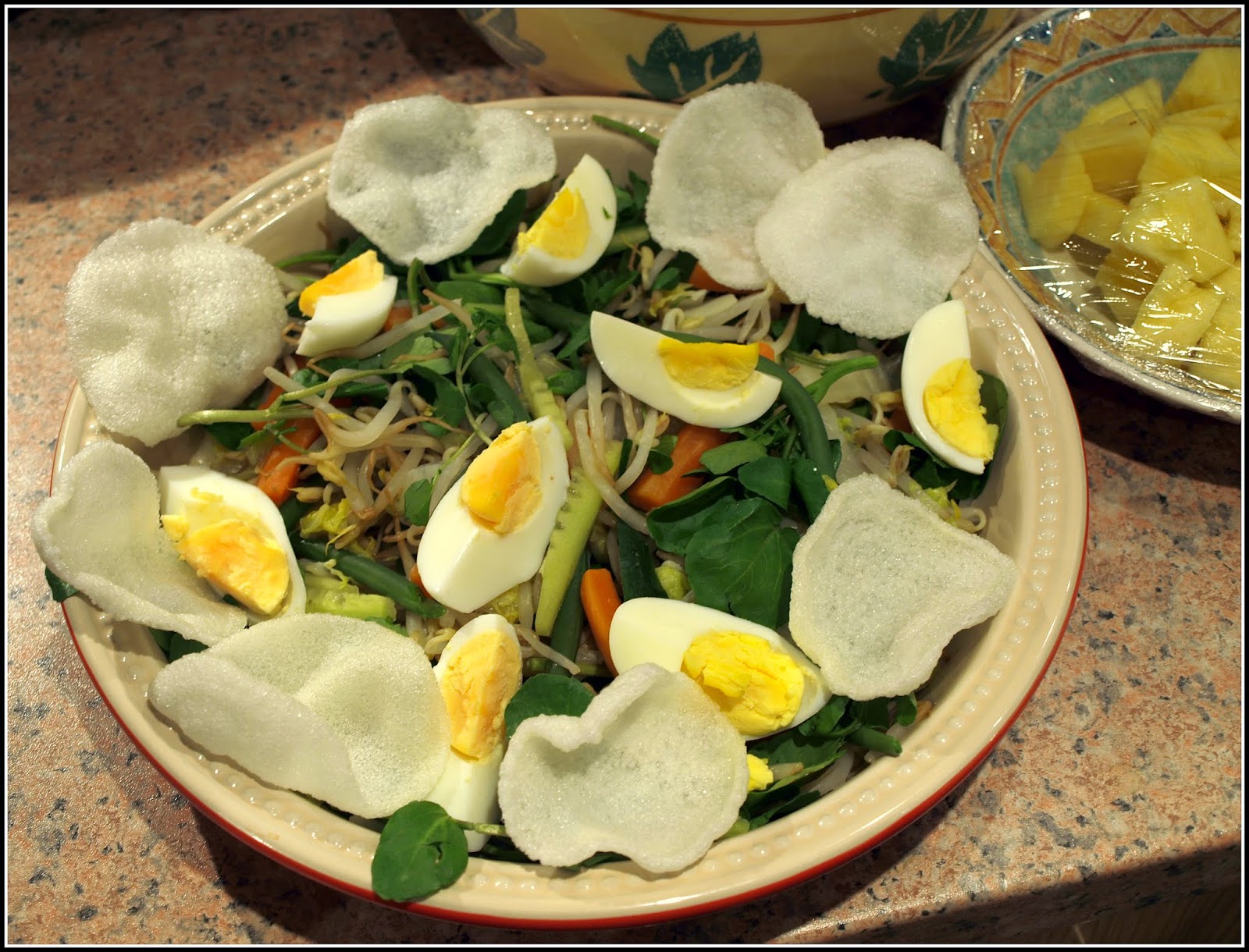 In the photo above you can just see a corner of our dessert - fresh pineapple. Preparing a fresh pineapple is an art too, but eminently worthwhile. Good value at present as well - ours was just 85p, and that provides enough for 4 servings.

Anyway, that's it, our own take on Malaysian cuisine. Not a quick weekday meal by any stretch of the imagination, but SO good!
Posted by Mark Willis at 10:00