At the weekend I planted my first potatoes of the year. They were four tubers each of "Winston" and "Annabelle", both First Early types, in other words ones that will mature in about 3 months. 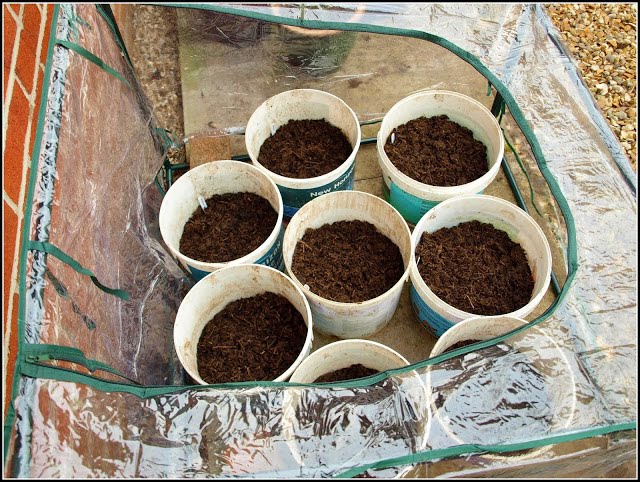 "Annabelle" is an oval shaped yellow-skinned potato with a waxy yellow flesh, allegedly ideal as a salad potato. I have not grown it before but it sounds good. "Winston" is a rather controversial variety. Everyone agrees that it is a good-looking one - definitely the one to choose if you are growing for exhibition - but opinions about its culinary value vary widely. One source says "The creamy, moist flesh of this first early variety has an excellent flavour and does not discolour on cooking", whereas another says "Flavour is lacking and the flesh has a watery consistency when cooked". It's hard to know who to believe. However, I note that this variety has earned an RHS Award of Garden Merit, so it can't be all that bad! There's only one way to find out for sure - try it myself.

My method of planting them is this: put a six-inch layer of composted stable manure in the bottom of the container; add a handful of pelleted chicken manure and a smaller handful of general-purpose fertiliser (I use "Growmore"); add a layer of general-purpose compost and place the potato tuber firmly in it, with the rose end (hopefully with chits!) uppermost. Cover the tuber with another layer of compost. By this time the container will be about half full. Place the container in a sheltered place outdoors, preferably under cover like this... 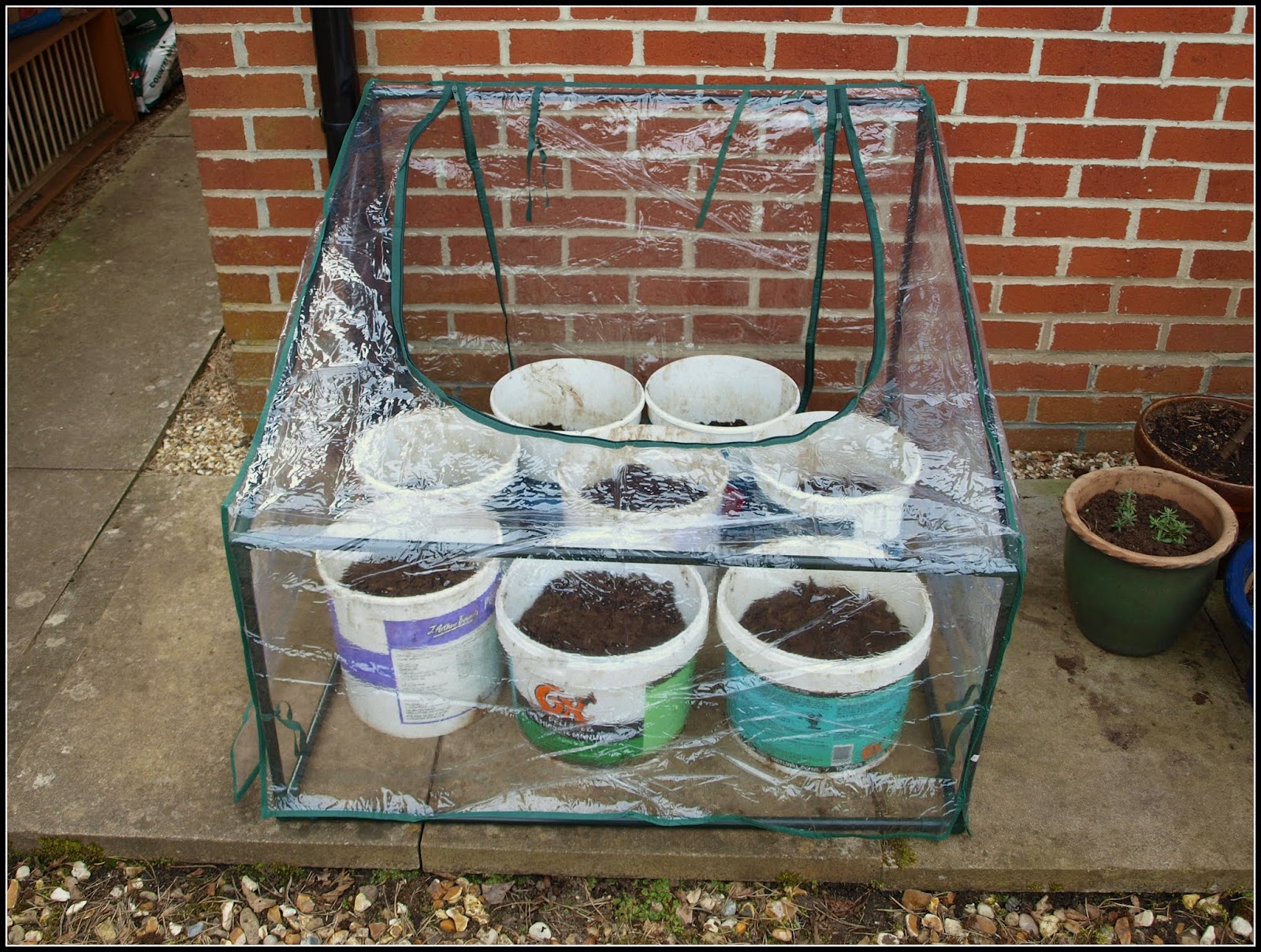 This is one of the two new "Seedling Greenhouses" that I recently bought. They each accommodate at least 8 containers - 10 at a pinch. They will allow the potatoes to get maximum light whilst protecting them from the weather. Emerging potato shoots are particularly vulnerable to frost damage, which is exactly why I have acquired these greenhouses.

You will have noticed that I am using old chicken manure containers for these potatoes, not the new big black containers I bought the other day, which I am reserving for my Second Early / Maincrop potatoes which need more space. 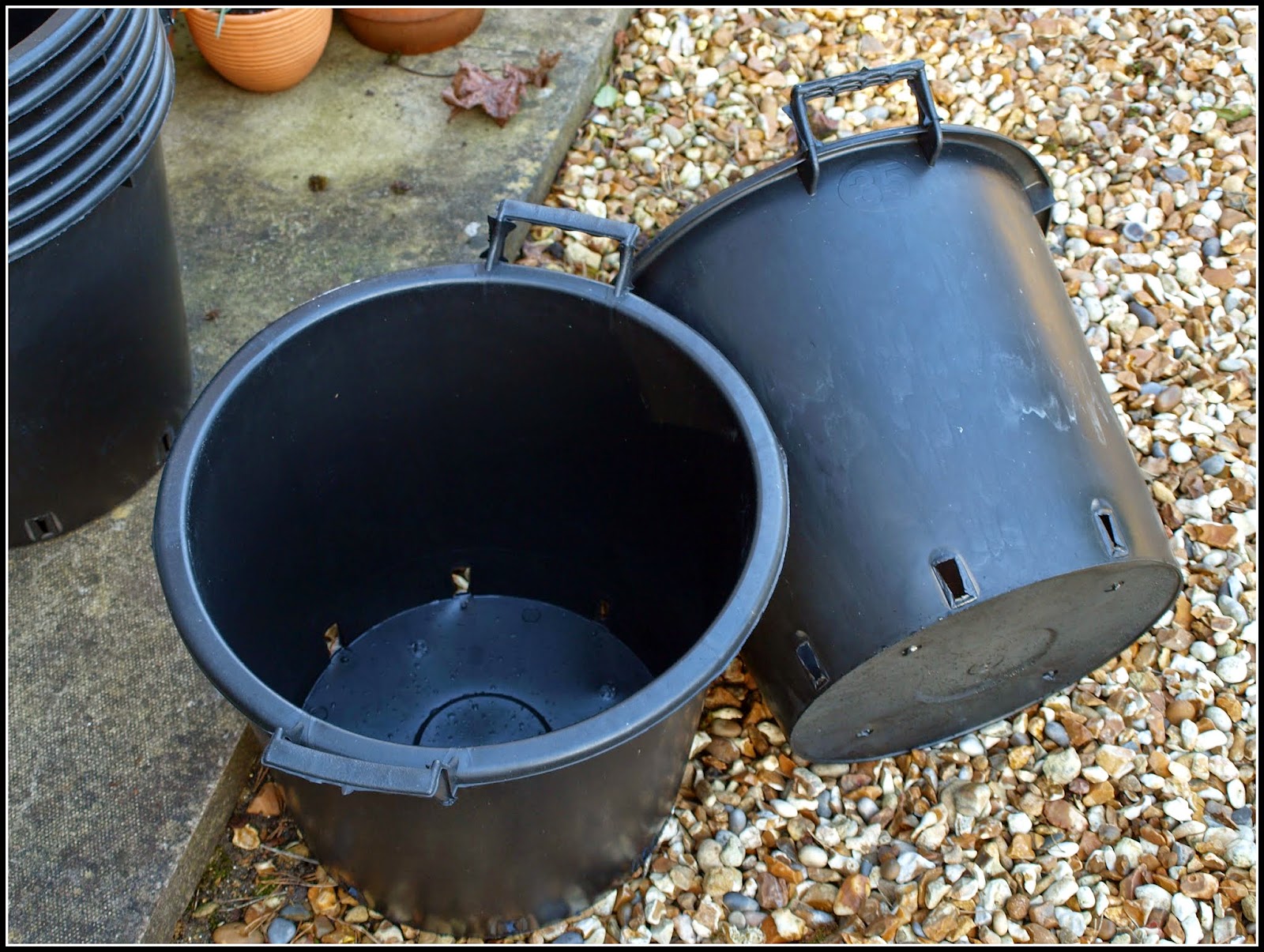 The new greenhouses have a slightly different configuration to the one I had before, having a zip-up opening which is smaller than the top surface. I wonder if it will be any better at coping with rainfall? It will certainly be less convenient when the plants get too tall for the cover to remain closed. 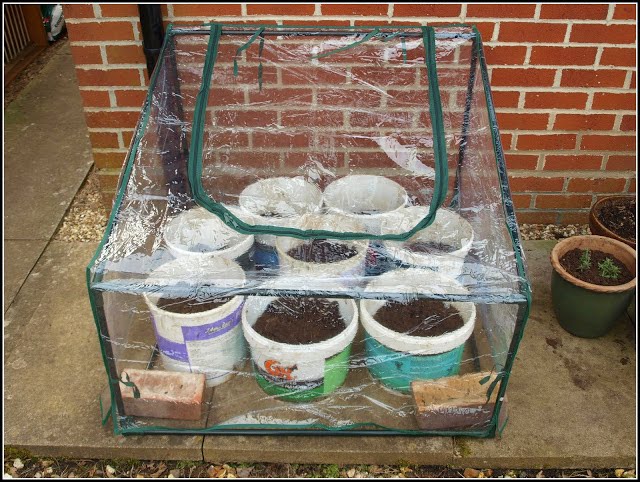 Did you notice that I have weighted-down the greenhouse with a brick at each corner? This is very necessary because it is very light and could easily be blown away by a strong wind.
Posted by Mark Willis at 12:00