Here's a progress report concerning my chillis. About half of the 20 varieties I sowed have germinated so far. This doesn't mean that the others have failed. It's just that some chillis germinate quicker than others. I haven't had room in the airing-cupboard (doubling as propagator!) for all of them, so I had been shuffling things around more-or-less every day, taking out ones that have germinated and putting others in.

The ones that have germinated have gone straight into my Growlight House, where they get good light but little extra heat. The Growlight House is in our spare bedroom, which is fairly warm all day (about 20C?) and I have put an electric heater in there too, at a low setting, so that it will come on if the temperature falls below 15C during the night.

Most of the plants have now developed their first pair of real leaves (discounting the cotyledons or "seed-leaves"), so at the weekend I pricked them out. This one is "Bolivian Rainbow" (Seed from Victoriana Nursery Gardens.) 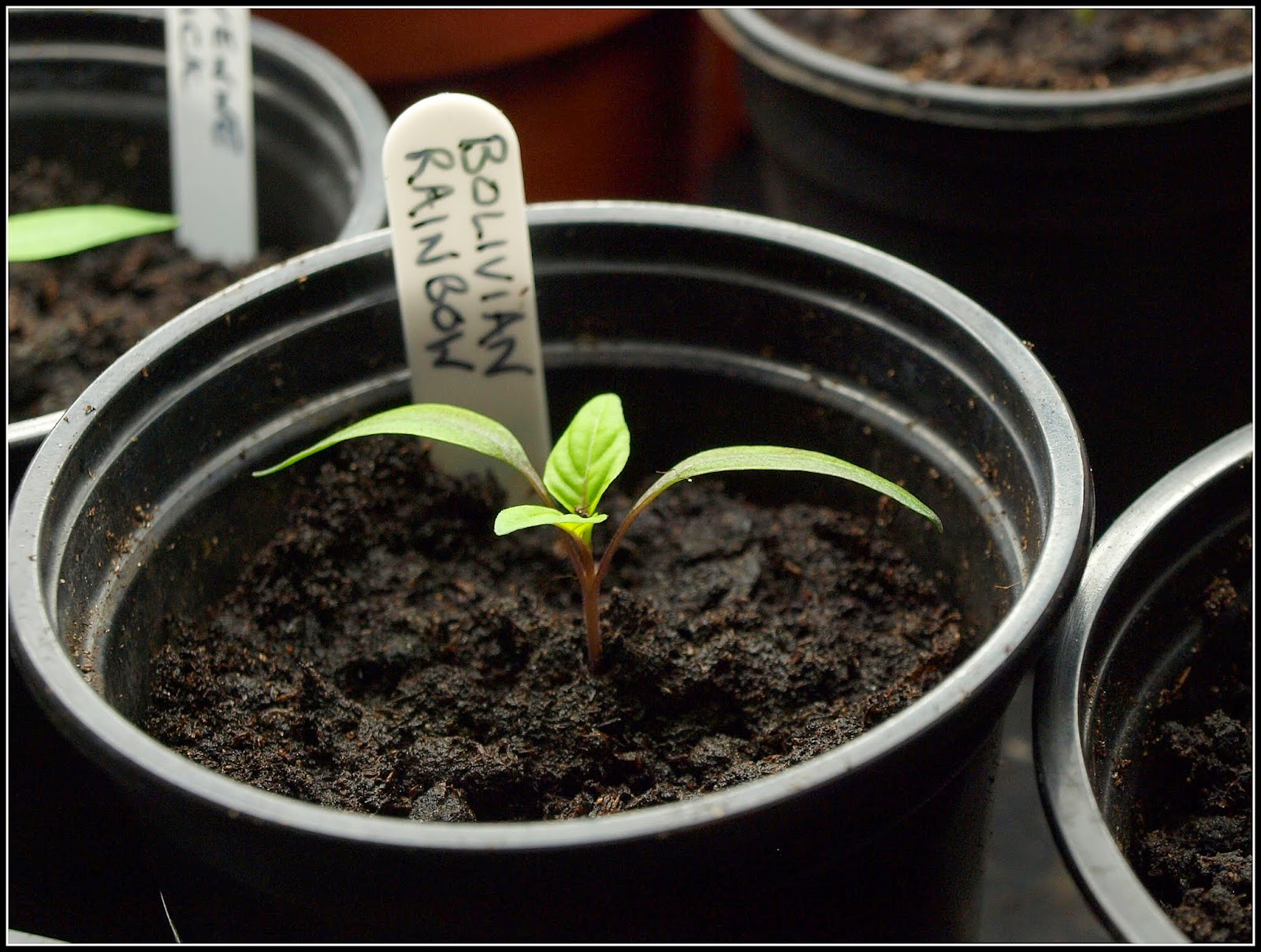 "Pricking-out" means putting each little seedling into a pot of its own. I had originally intended to just pinch-out all but the strongest seedling that germinated and leave that one in the original pot, but since so many of the seedlings have come up strong and healthy I have relented and kept two of each type. This has meant re-potting them: 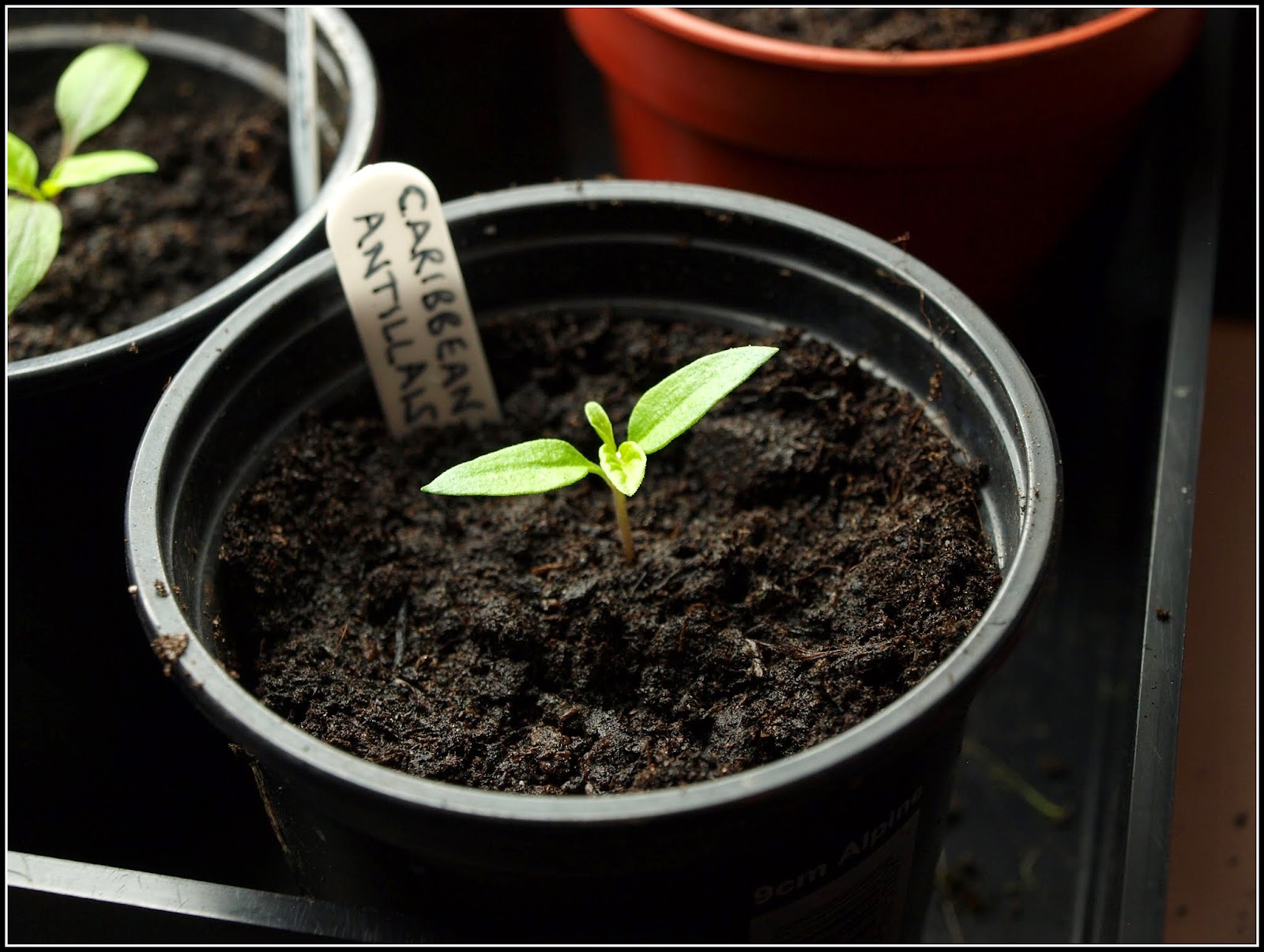 To do this involves gently easing the seedlings out of the compost (for this I use a small piece of bamboo, cut to a point) and then planting them into a pot of fresh compost, making sure the roots are carefully arranged as deep as possible. Finally you add a bit more compost around the stem and firm it down, before watering-in with some room-temperature water. Avoid using cold water straight from the tap. This may be too much of a shock for the young plant. Then they go back under the lights. The seedlings may droop for a while after transplanting, but they will soon recover. 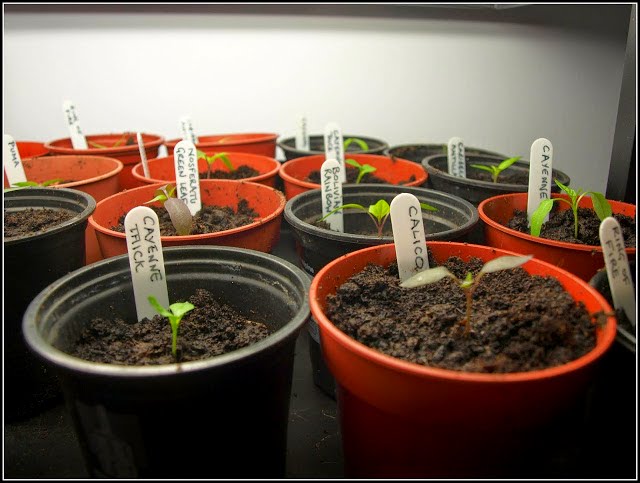 This "Puma" seedling is from seeds sent to me by Enrico Ferrario, a friend from Italy, who writes the blog "Ortolano a 30 anni". Amongst many other vegetables, he grows a big range of chillis. 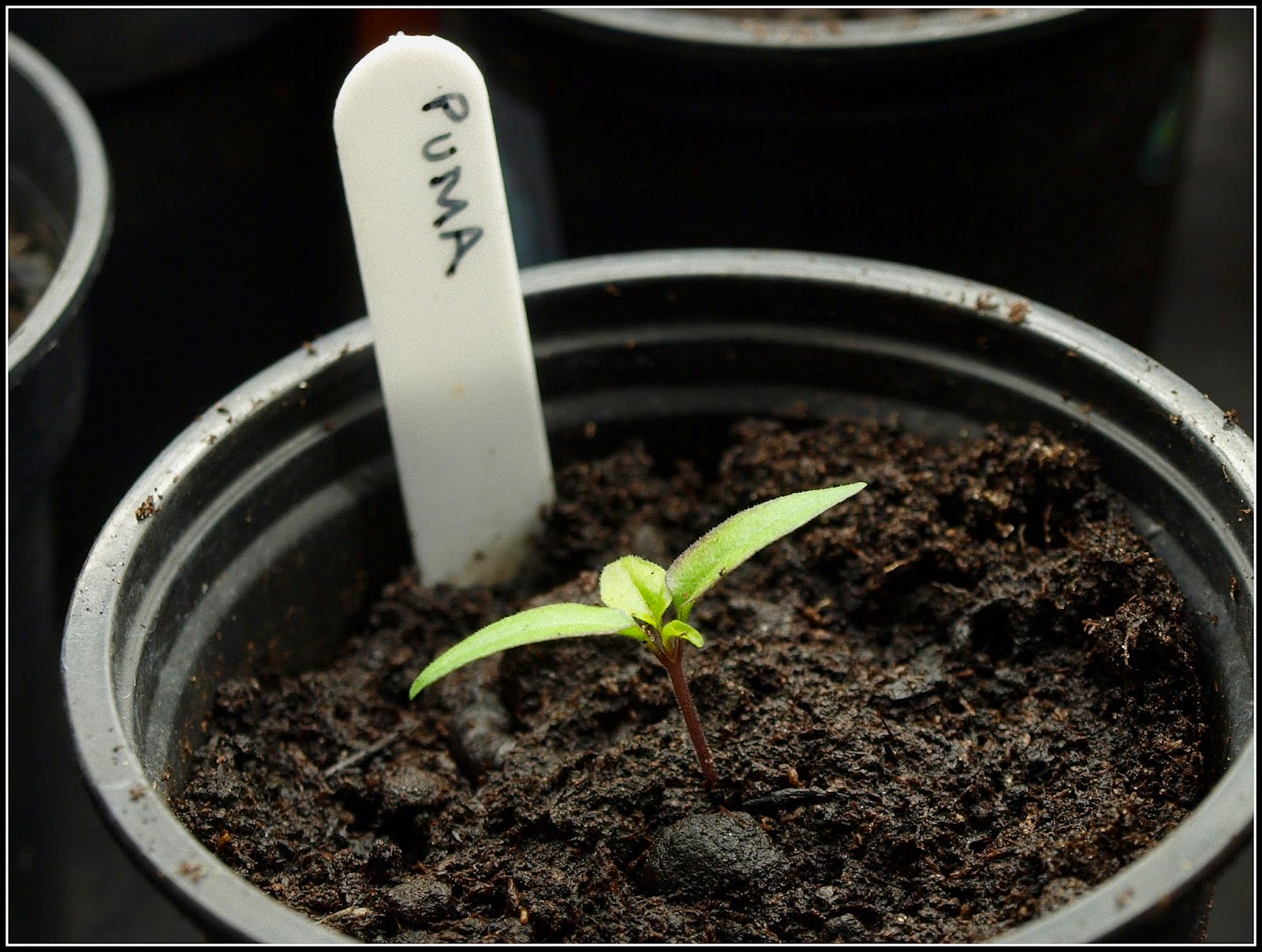 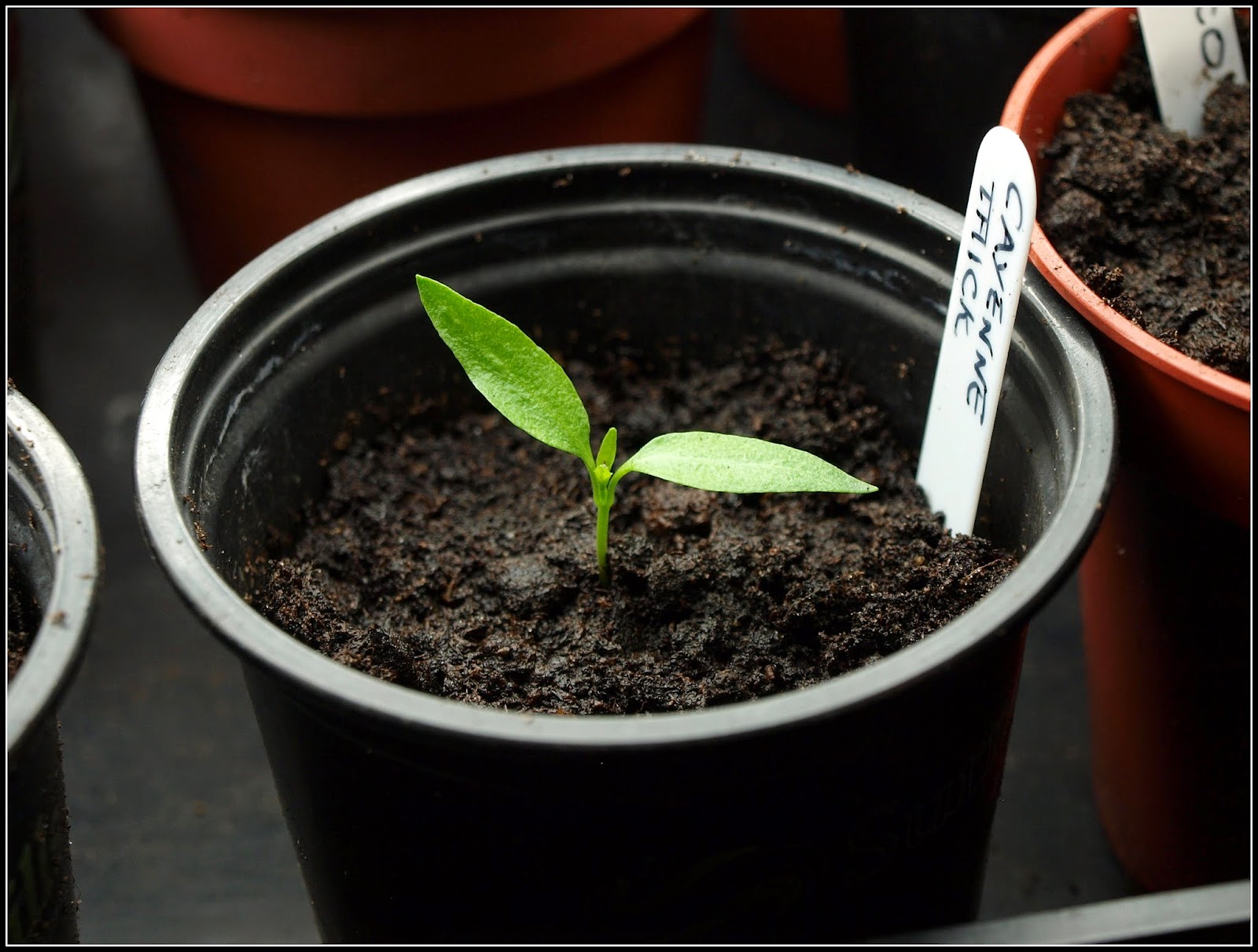 As well as these chillis, the first of my "Connover's Colossal" Asparagus seeds has also germinated: 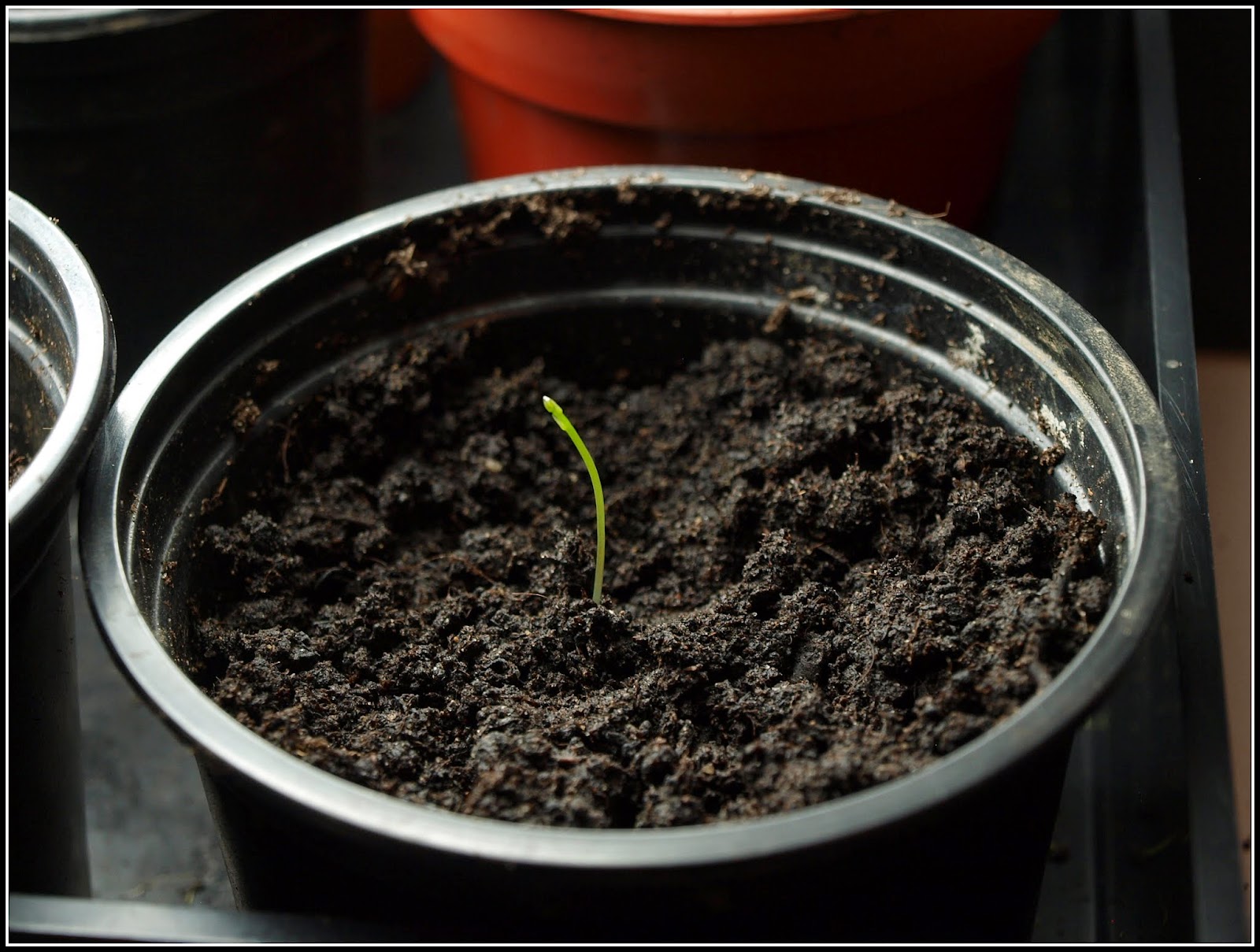 Only that one so far, out of a total of 12, but I'm still hopeful that the others will appear soon.

Meanwhile, the second batch of Broad Beans, kept indoors to avoid the ravages of the mice that obliterated the first batch, are beginning to show through. The warmth of the house has allowed them to germinate in half the time of the first batch, which were kept in the garage.
Posted by Mark Willis at 12:00