I'm sure most readers know full well that the majority of my crops are produced in raised beds. However, since space is tight I often resort to growing things in containers too. Growing veg in containers is also a good plan if you need to adjust the soil in any way: what would be impractical for a big plot becomes possible in a container. For instance, I have grown Rhubarb for many years now, and it has never done very well because the soil in my garden is very light and sandy, so completely unsuitable for Rhubarb. Last Autumn I decided on Plan 'B'. I moved it to a big container: 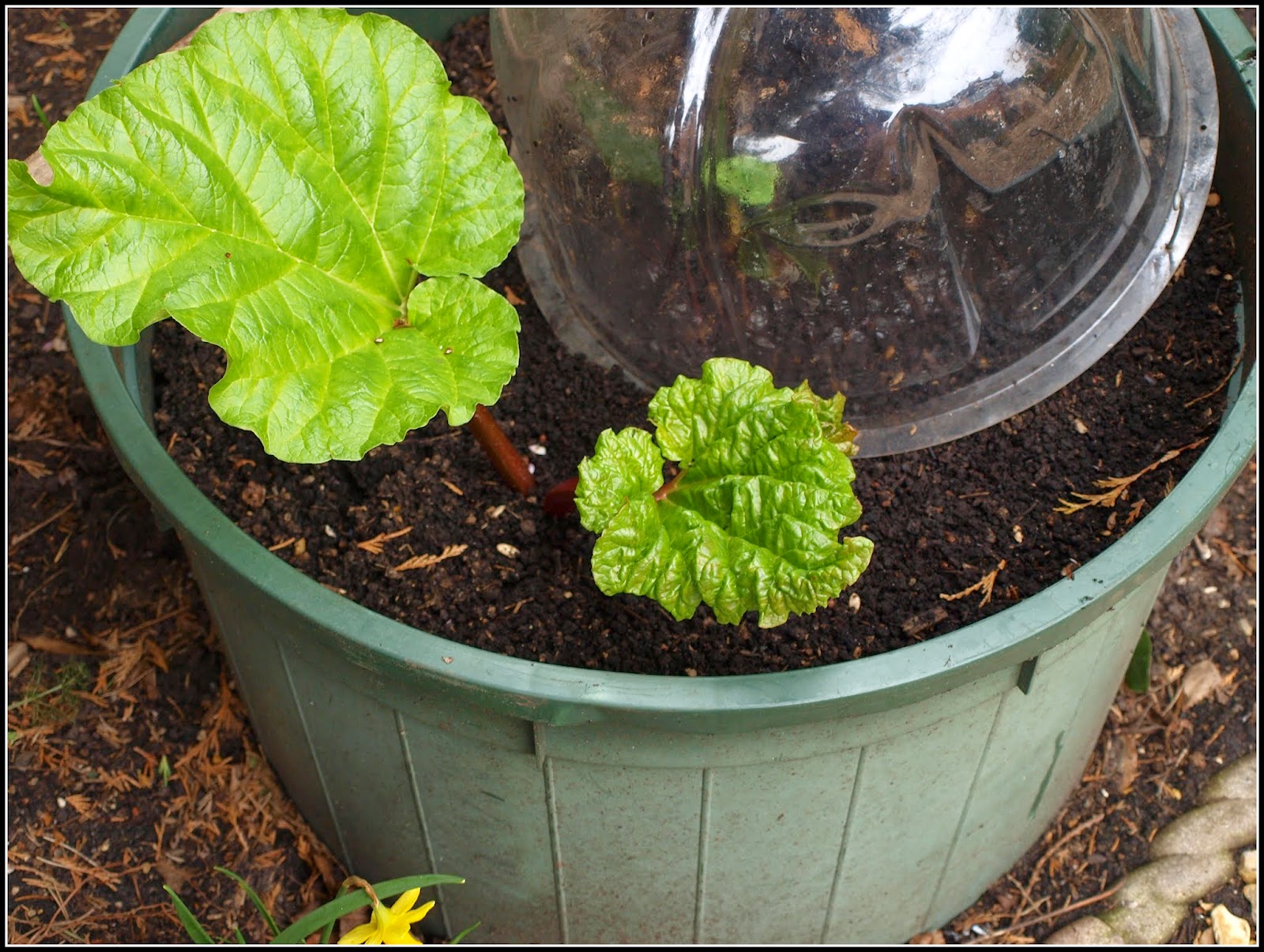 When I dug them up the Rhubarb crowns were looking very sorry for themselves. The soil in which they were growing had become full of roots from my neighbour's huge Leylandii tree, which were evidently monopolising the nutrients. In fact some of the crowns had faded away entirely. I have planted six crowns at various times but I could only find two decent ones and one very tiny one.

The container I have used for the Rhubarb is actually just a ring - it is the upper part of an old water-butt, without a bottom to it. I dug down quite a long way - deeper than most of the offending tree roots (which were coming into my garden laterally), before installing the ring, and then filled it with composted stable-manure previously used for growing potatoes, and a fair bit of home-made compost. When the Rhubarb crowns were in I covered them with another good layer of compost and then with a big plastic cloche to protect them from the worst of the Winter weather. 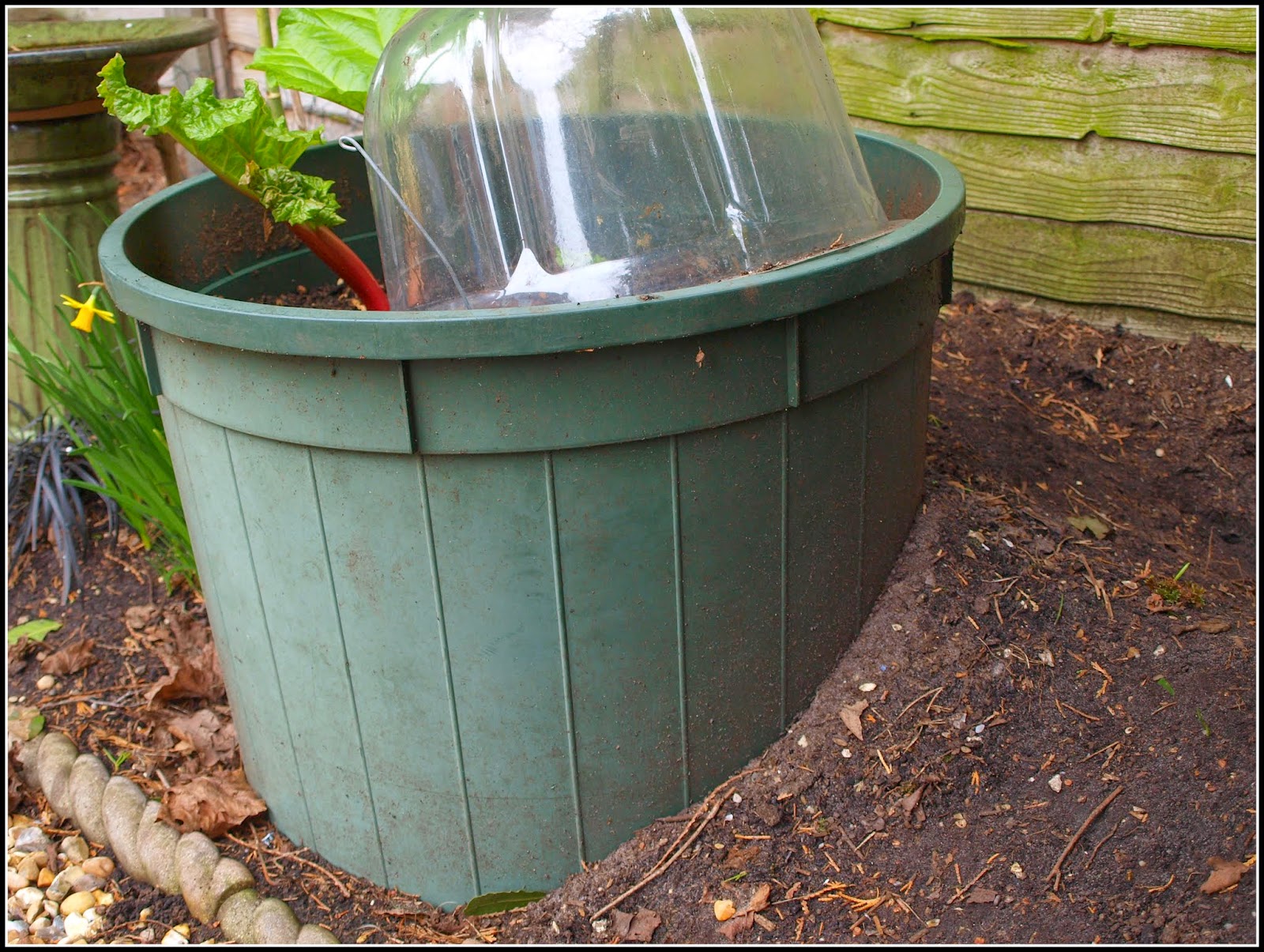 Now that the temperatures are rising, the Rhubarb has begun to grow again, and is looking much happier: 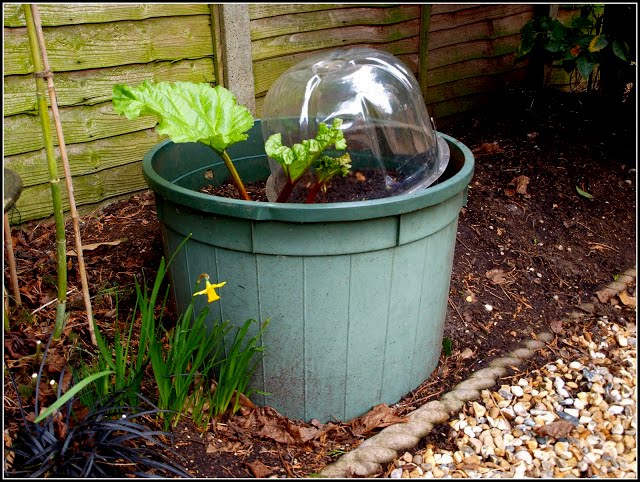 I think I will try to resist harvesting any of it this year, and let it recover its strength. Next year I will take a small crop.

Elsewhere in the garden I have this: 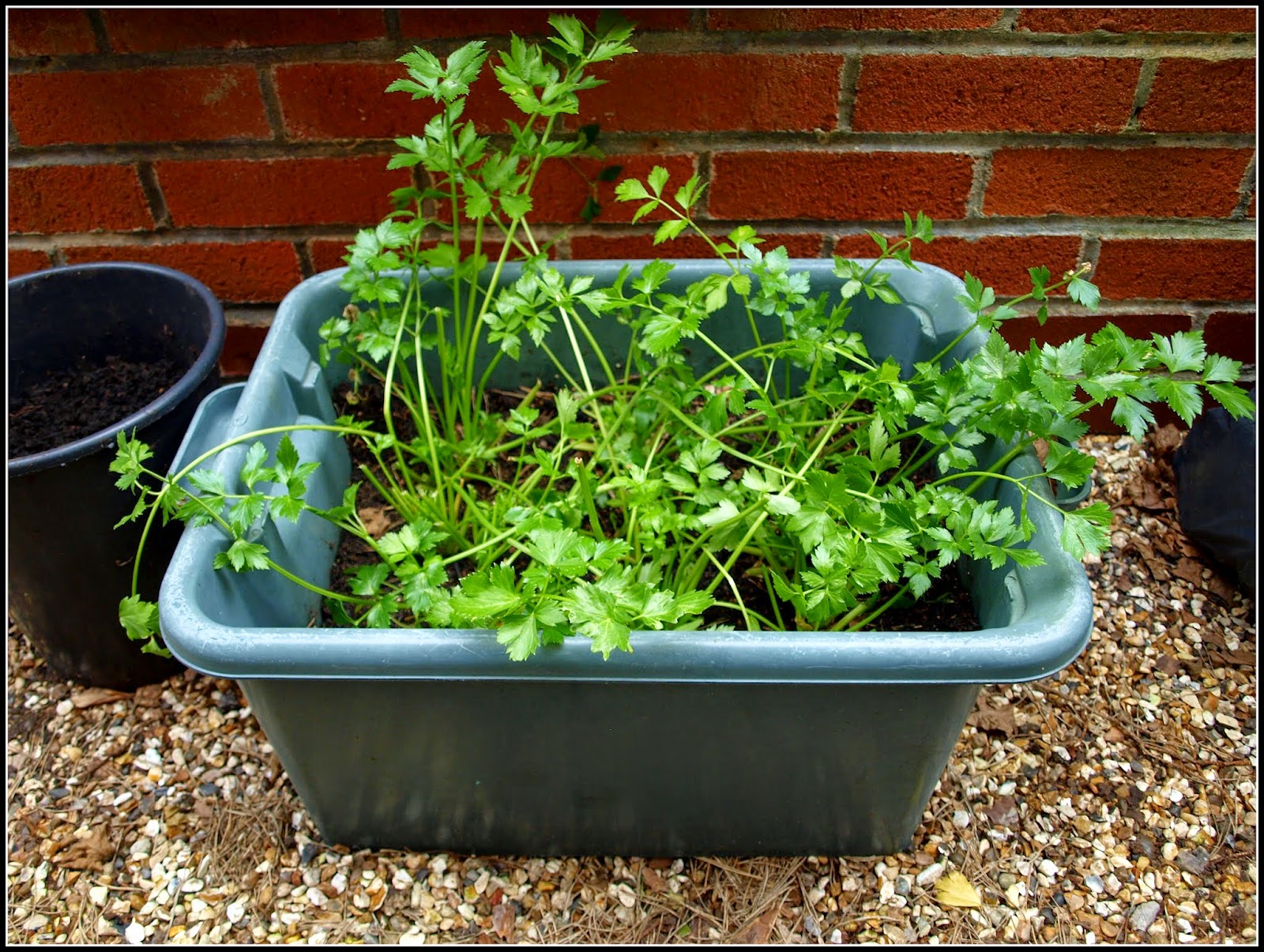 It is the plastic crate in which is growing my Leaf Celery, started last year. 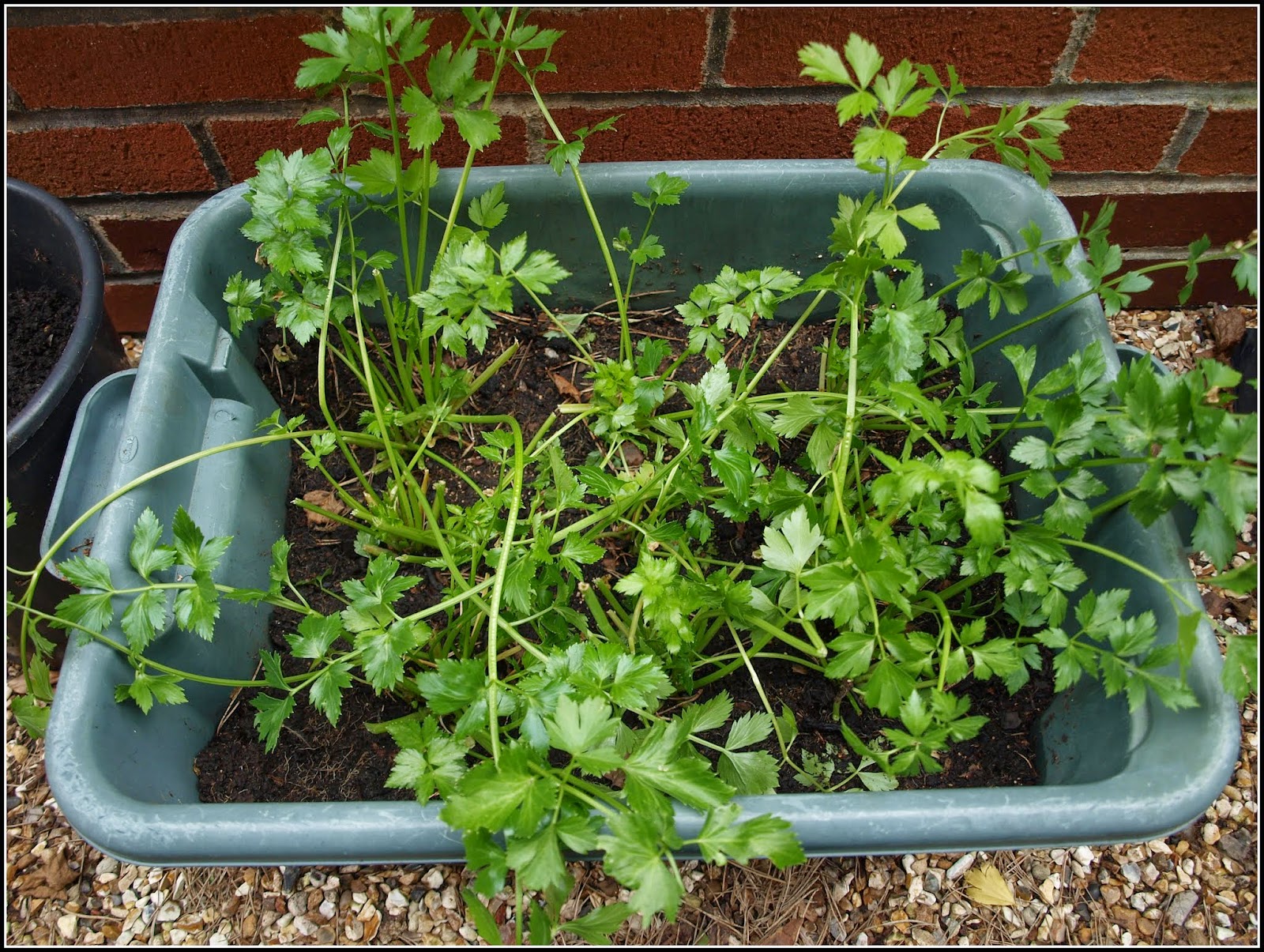 The Leaf Celery seems to have survived the Winter OK. I have removed all the big tatty leaves, many of them yellow, to allow more light to reach the growing-points of the plants (there are 9 in that container). In order to replenish the nutrients in the compost I have added a handful of Growmore general-purpose fertiliser. Leaf Celery is officially a biennial, producing flowers (and then seeds) in its second year, but it looks as if there will be more useful leaves to come still so I'm not discarding this lot just yet! 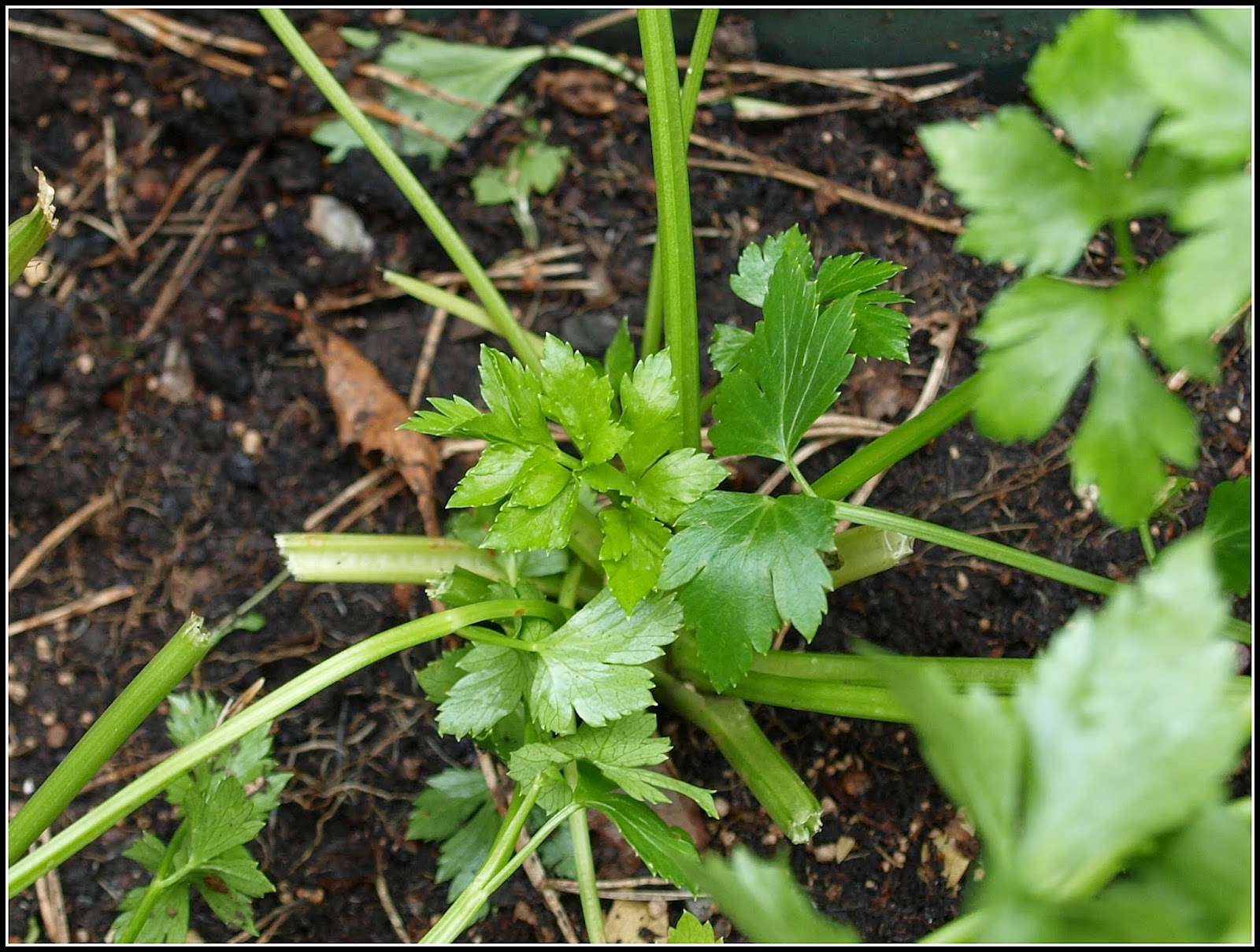 Here is another example of how I grow veg in containers. These two are planted with potatoes (First Early "Vale's Emerald" in this case). Since they wouldn't fit in the plastic greenhouse (right), I have covered the containers with cloches to protect them from frost, but of course the cloches will be removed then the danger of frost has passed - by which time the plants will have grown too big for them anyway. 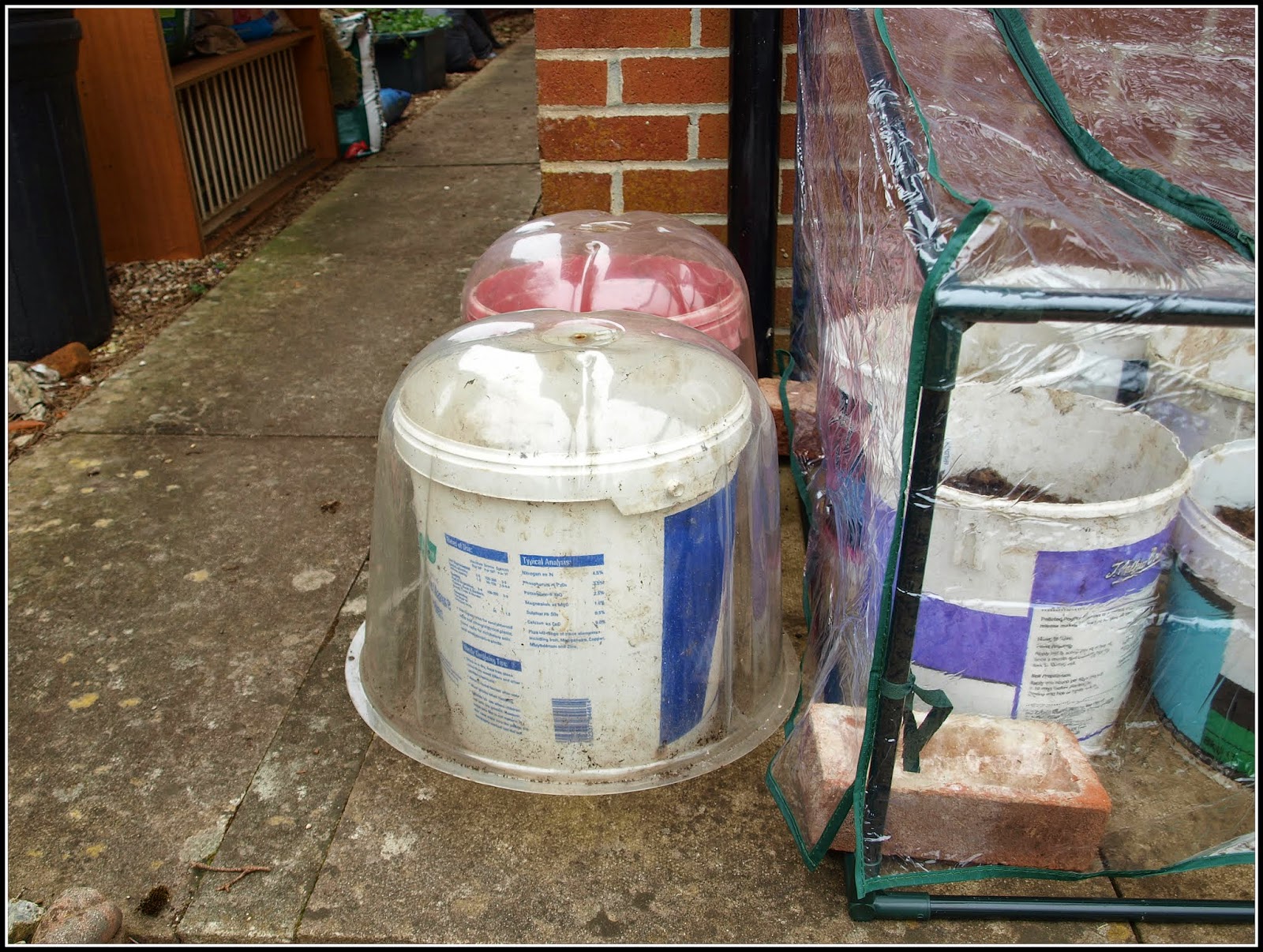 It's not only vegetables that I grow in pots. Look at this little lot:- 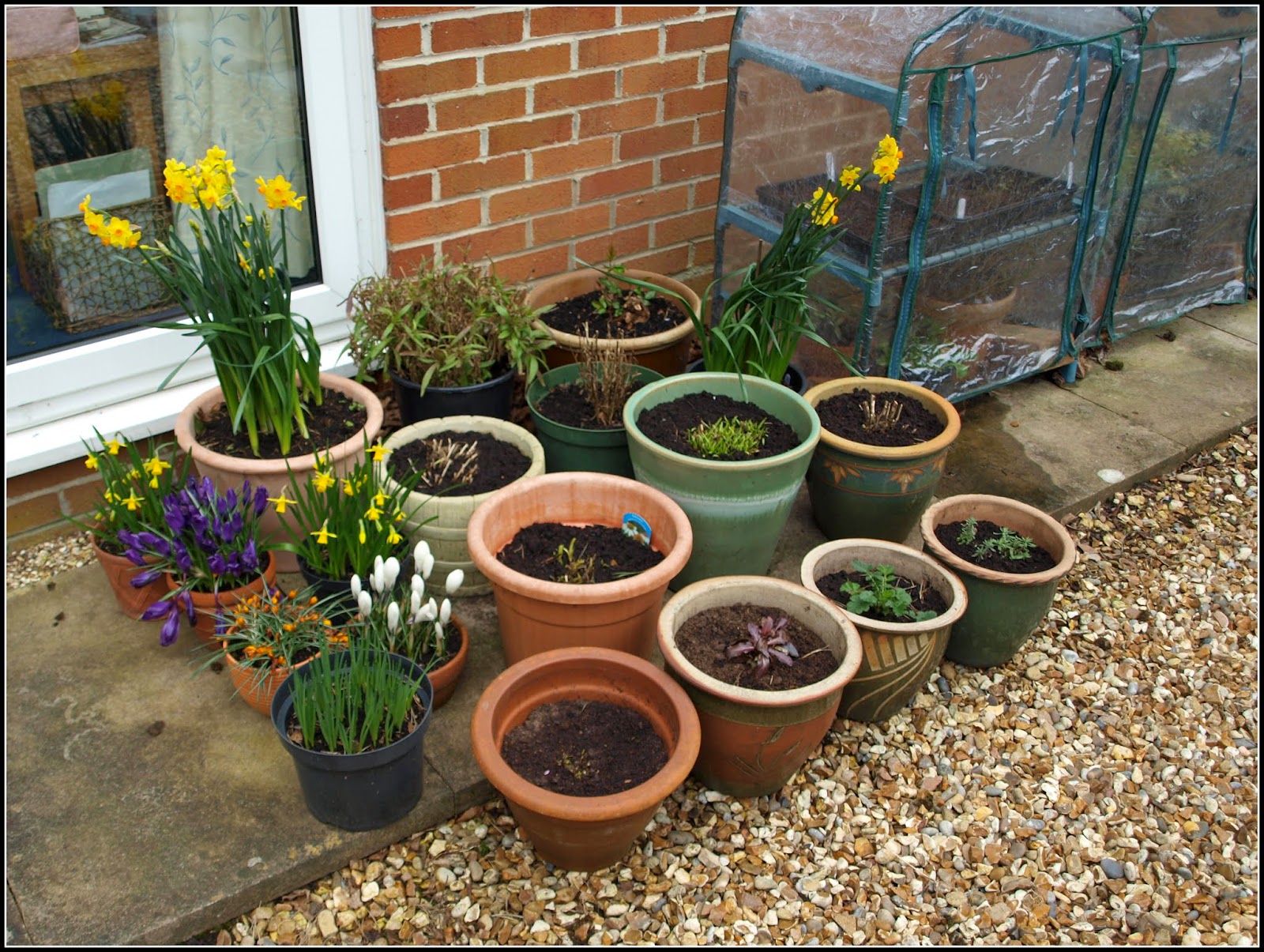 Apart from the obvious Spring bulbs you can see flowering, most of these are herbaceous perennials, just springing into new growth. I have got the pots up near the house at present, for protection from the wind, but in due course they will be distributed around the garden.

In fact, wherever you look in my garden you see containers! 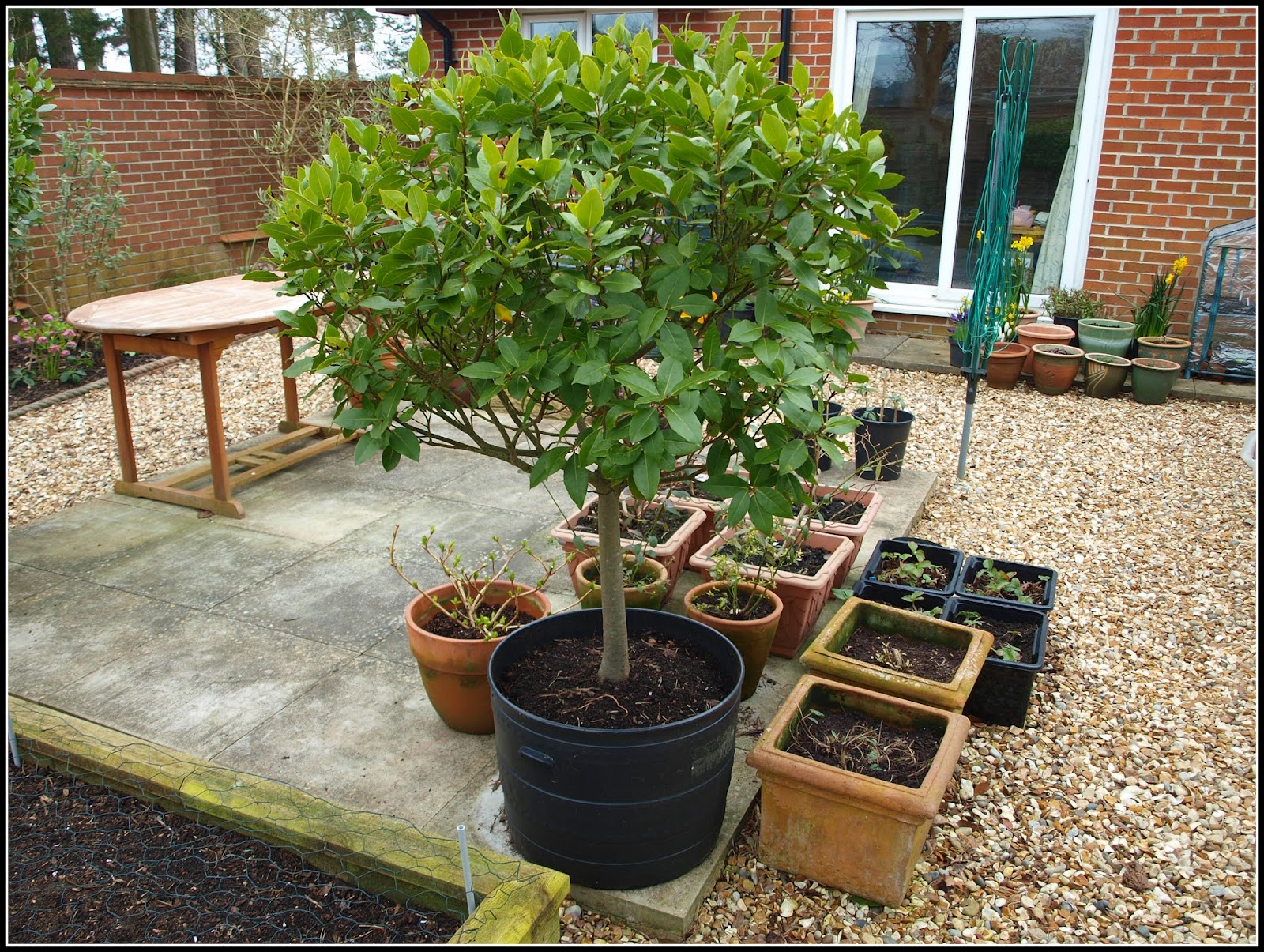 Most of them look pretty bare at present, but just you wait till Summer...
Posted by Mark Willis at 12:00