Many Brassicas take a long time to mature - e.g. Purple Sprouting Broccoli and Brussels Sprouts - so you need to plan well ahead. I aim to have PSB available for harvest from February to the end of April, so I get my seeds in at about the beginning of May, whereas I want Brussels Sprouts for Late Autumn / Early Winter, so they get sown in February / March.

These are emerging seedlings of Brussels Sprout "Bosworth". They were germinated indoors (on the bathroom windowsill!) but have now been moved outside into one of the mini-greenhouses to make sure they get enough light to prevent them going leggy. 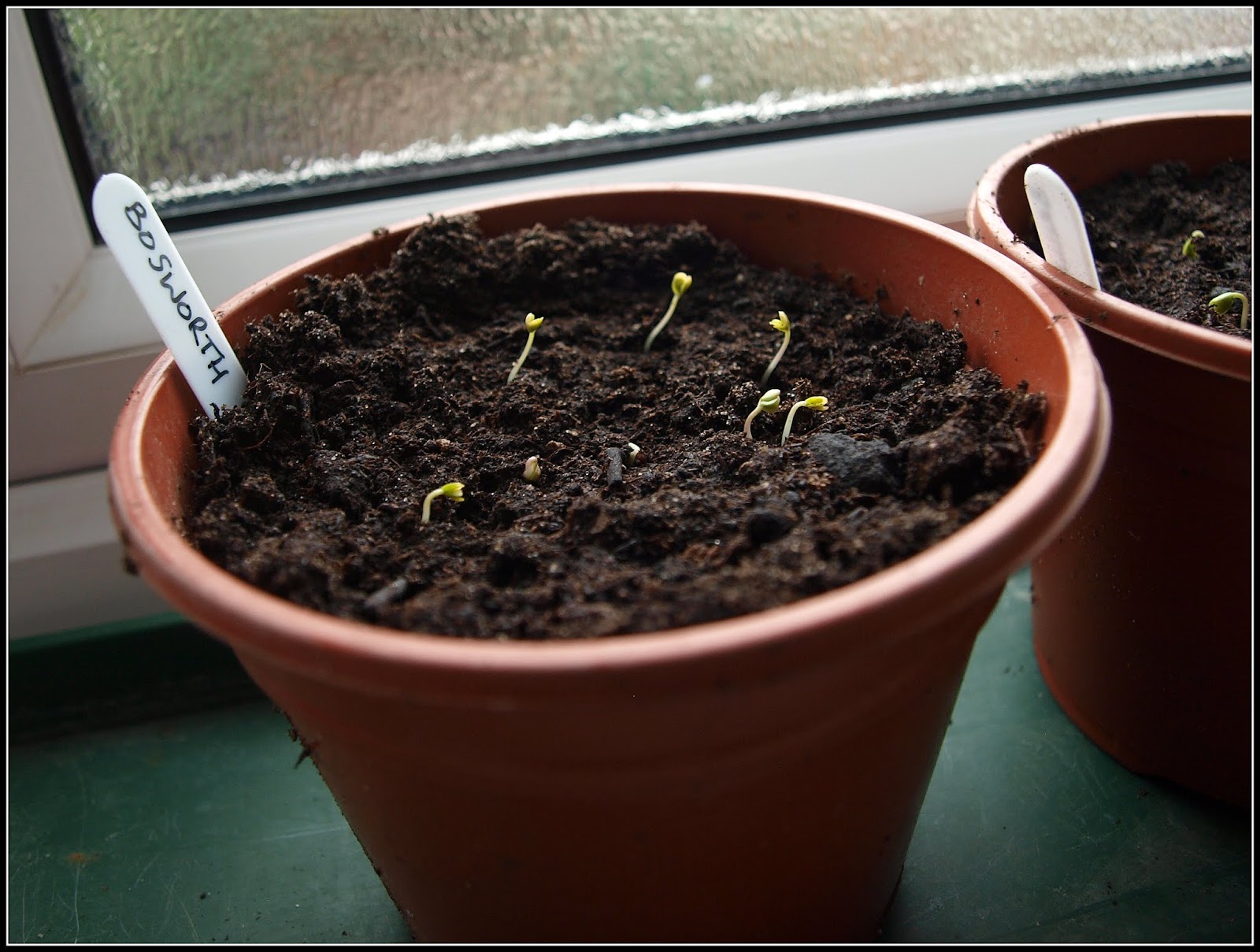 Here they are in close-up: 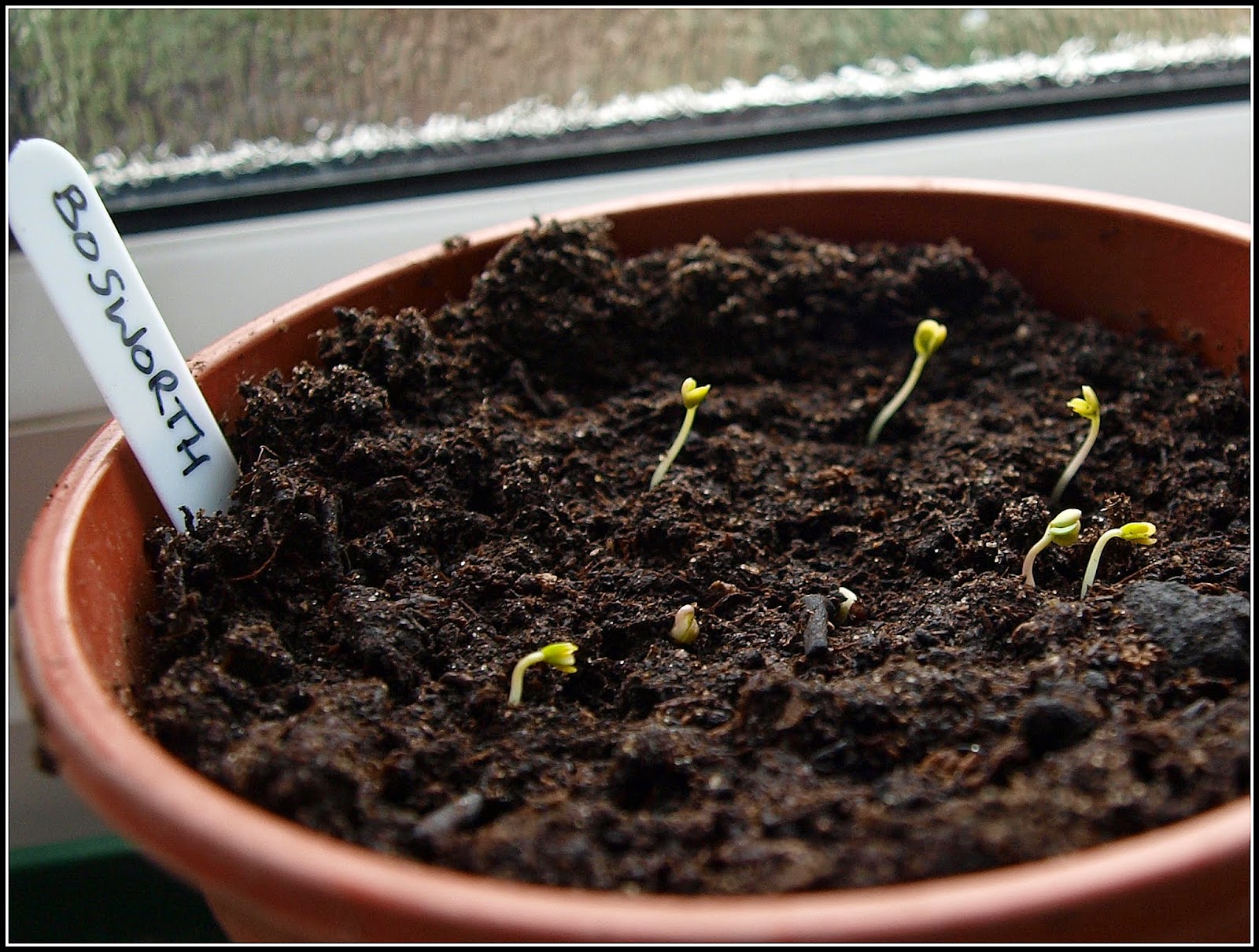 You can see that they are all leaning the same way, seeking out the light.

This is another variety of Brussels Sprout - "Cromwell". So many of the BS varieties available have such lovely historical names - Bosworth, Cromwell, Napoleon etc! 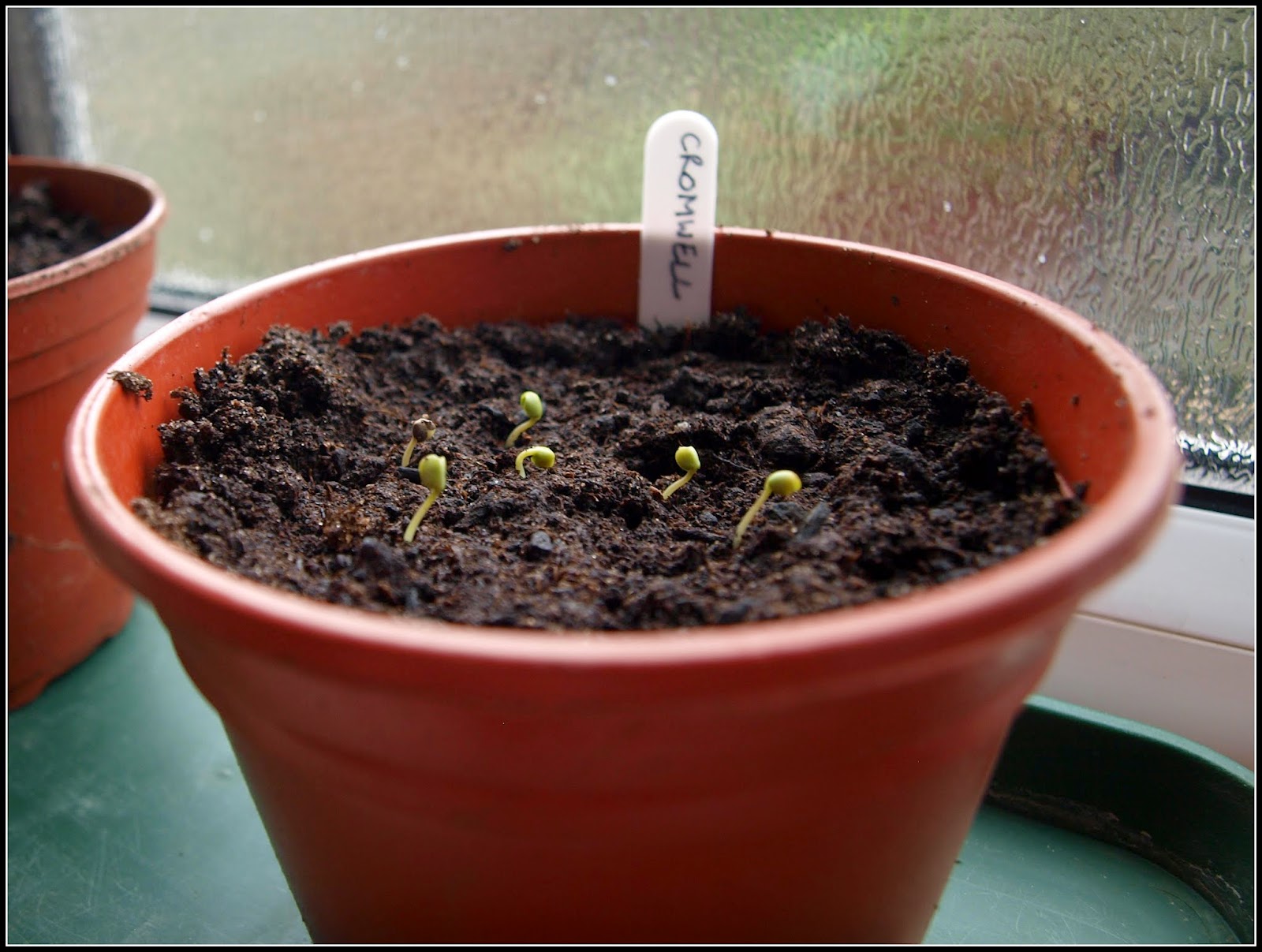 I will only need at most a couple of plants from each of the varieties I have sown, but I sowed about 8 seeds of each, just to be sure that I get a decent number of seedlings to choose from. Last year I grew six BS plants, and their overall yield was very respectable but the individual sprouts were quite small. I think this year I may decide to grow only four plants (one each of the 4 varieties I have sown), which will give them more room to develop, and hopefully they will then produce bigger sprouts. Sometimes "Less is More".

Here they are in the mini-greenhouse. They have certainly straightened-up, and gone a nice healthy green colour. 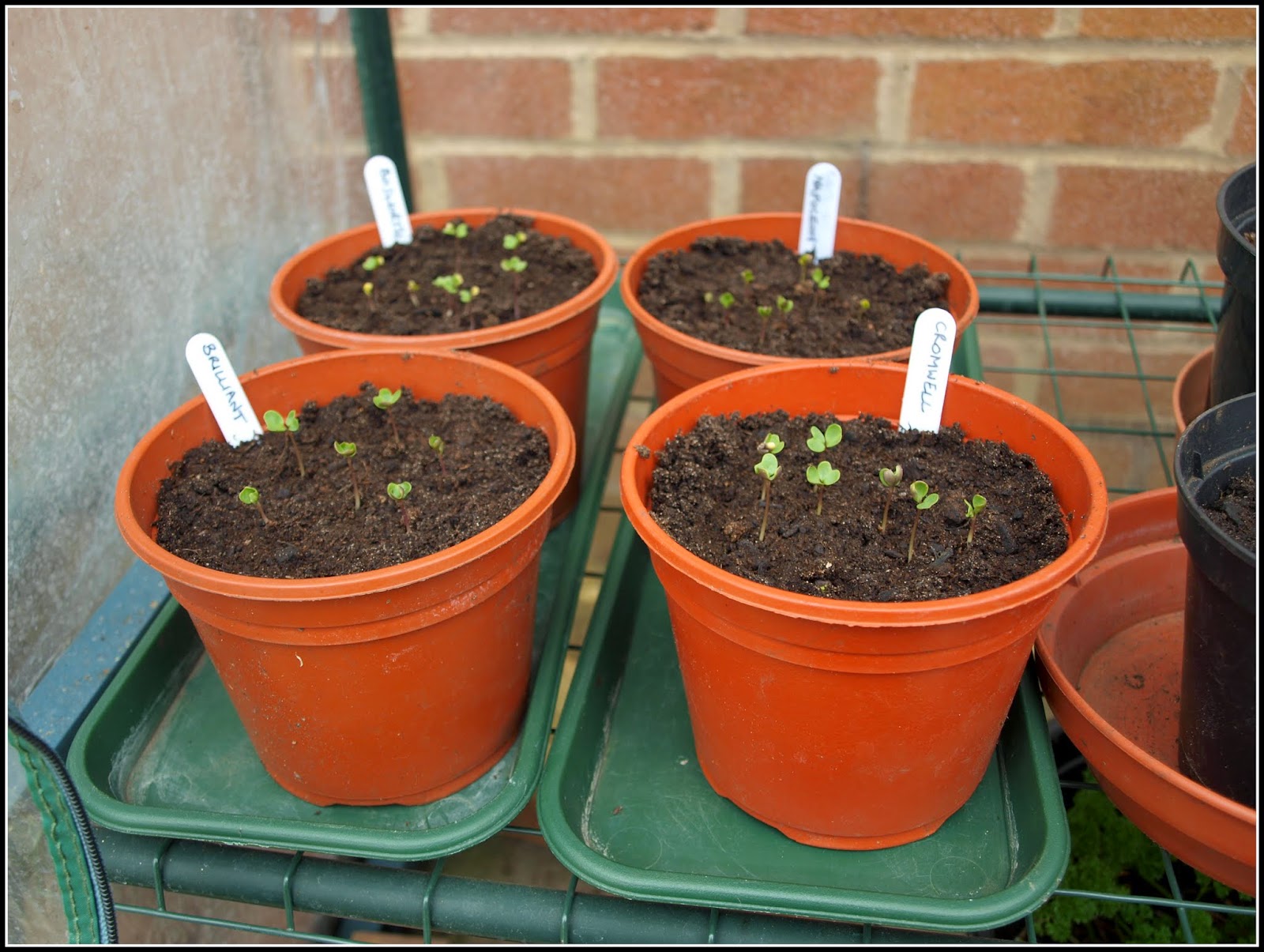 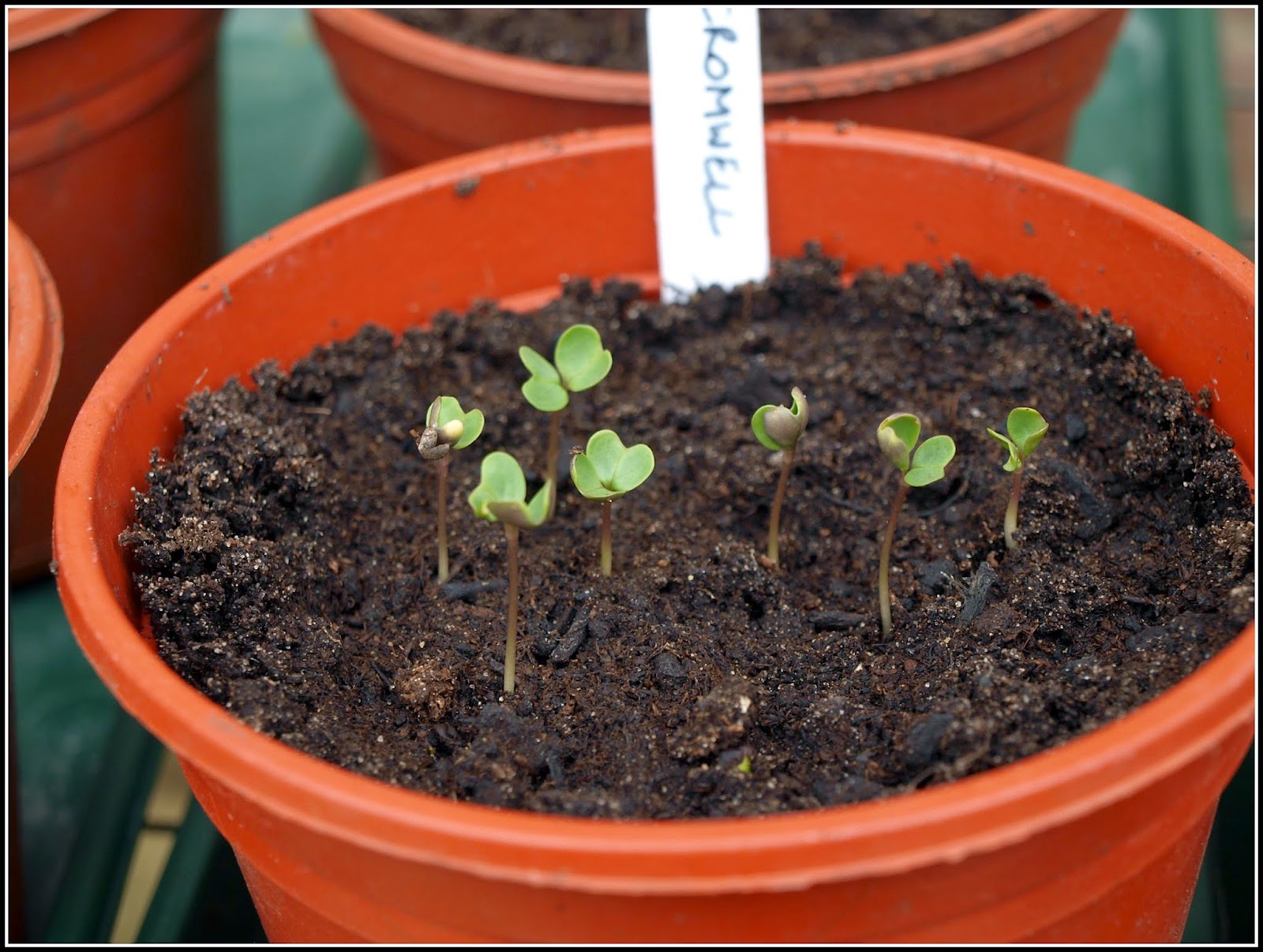 These ones have come up very close together and will need to be thinned-out. 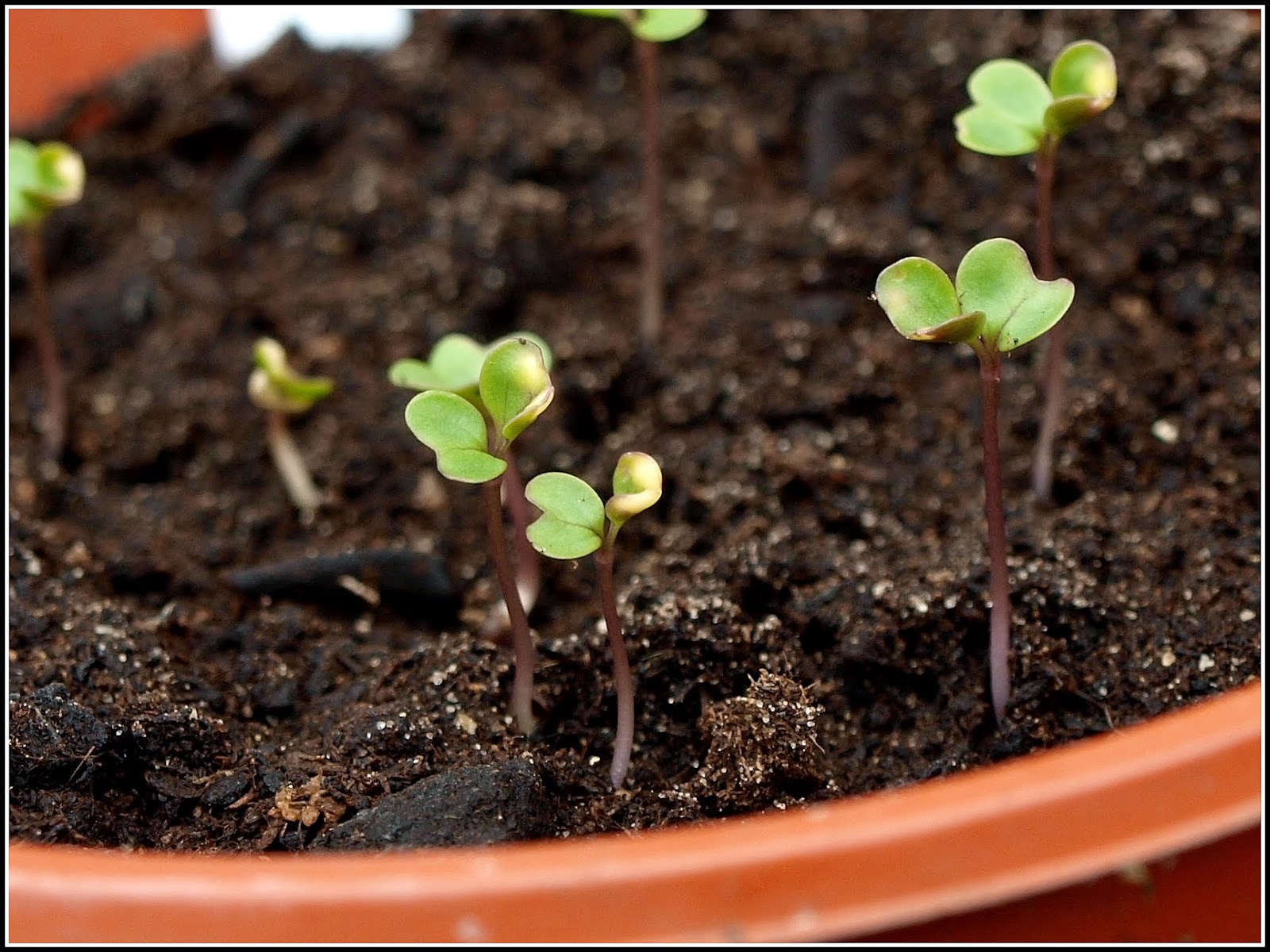 I have also sowed seeds for the Calabrese-style Broccoli "Di Ciccio", an old traditional variety. It is one that I first heard about via fellow veg-enthusiast Michelle Hamer who writes the blog "From Seed to Table". She wrote a "Spotlight on Di Ciccio" blogpost about two years ago, and it was this that sparked my interest in the variety. Michelle gardens in the Carmel Valley of California, so there is no guarantee that I will be able to produce Broccoli as good as hers, but it will be fun trying! Hopefully it will produce a crop in the Summer-time, before the Brussels Sprouts are ready. 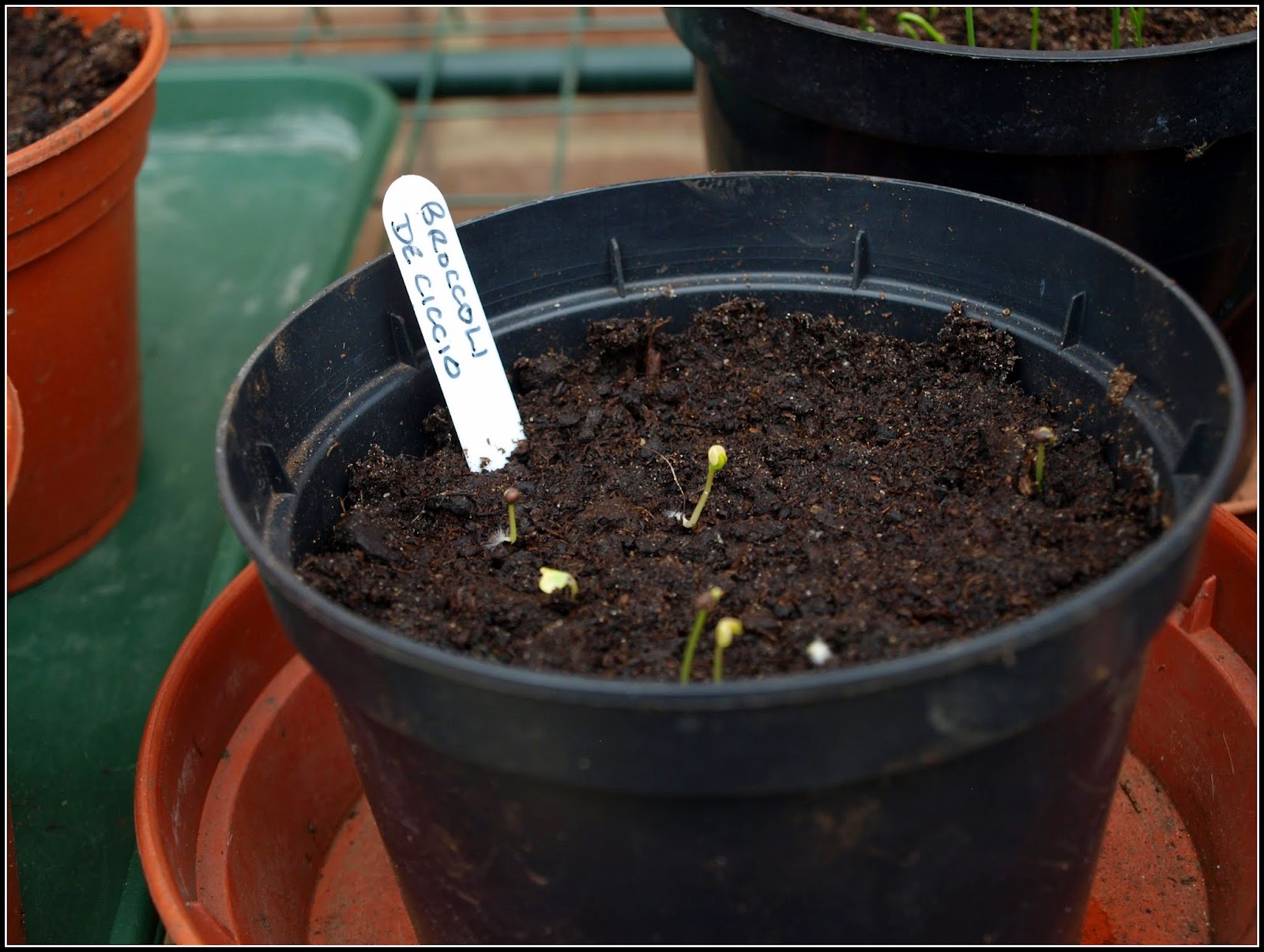 My final brassica on the go at present is Kohlrabi "Modrava", a purple variety [No photo, because they haven't germinated yet]. Kohlrabi is relatively quick-growing, so I hope to be able to sneak a few plants in somewhere. I haven't decided exactly where just yet, but one possibility is to inter-plant them with the Brussels Sprouts. They would mature well before the Sprouts. We'll see...
Posted by Mark Willis at 12:00