Years ago, when our daughters were young, one of our favourite places to go for a day out was Old Winchester Hill. This week, Jane and I decided to go there again "for old times' sake", so I'm going to describe our outing for you. 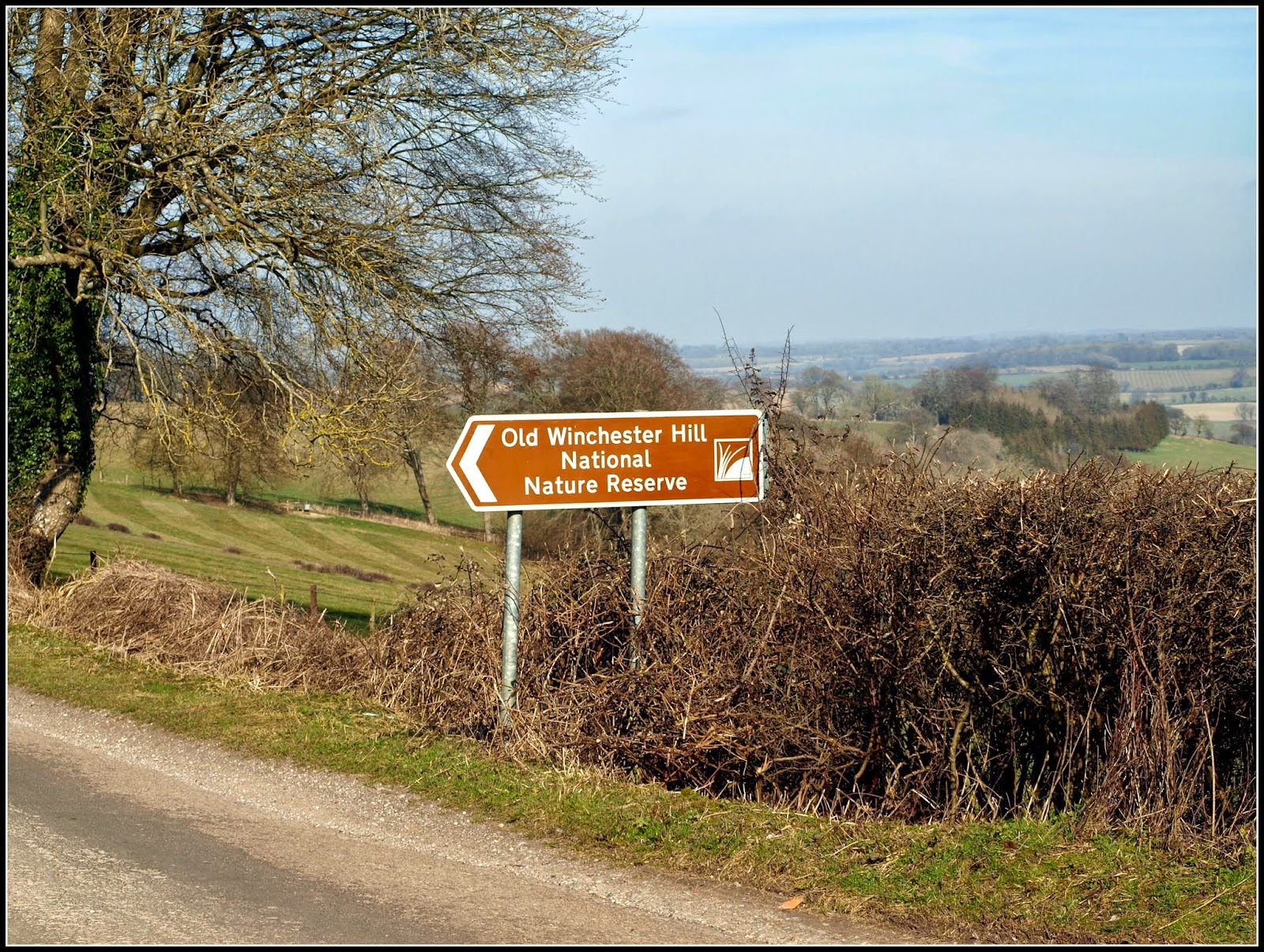 Old Winchester Hill is about 10km West of Petersfield, in the heart of rural Hampshire. It is about 45 minutes' drive from where we live. The area is an officially-designated Nature Reserve, where you might be lucky enough to see deer, badgers, foxes, rabbits, squirrels and various types of bird of prey. The site includes a huge Iron Age fort whose massive ramparts encircle a steep-sided promontory at the Southern end of the reserve. 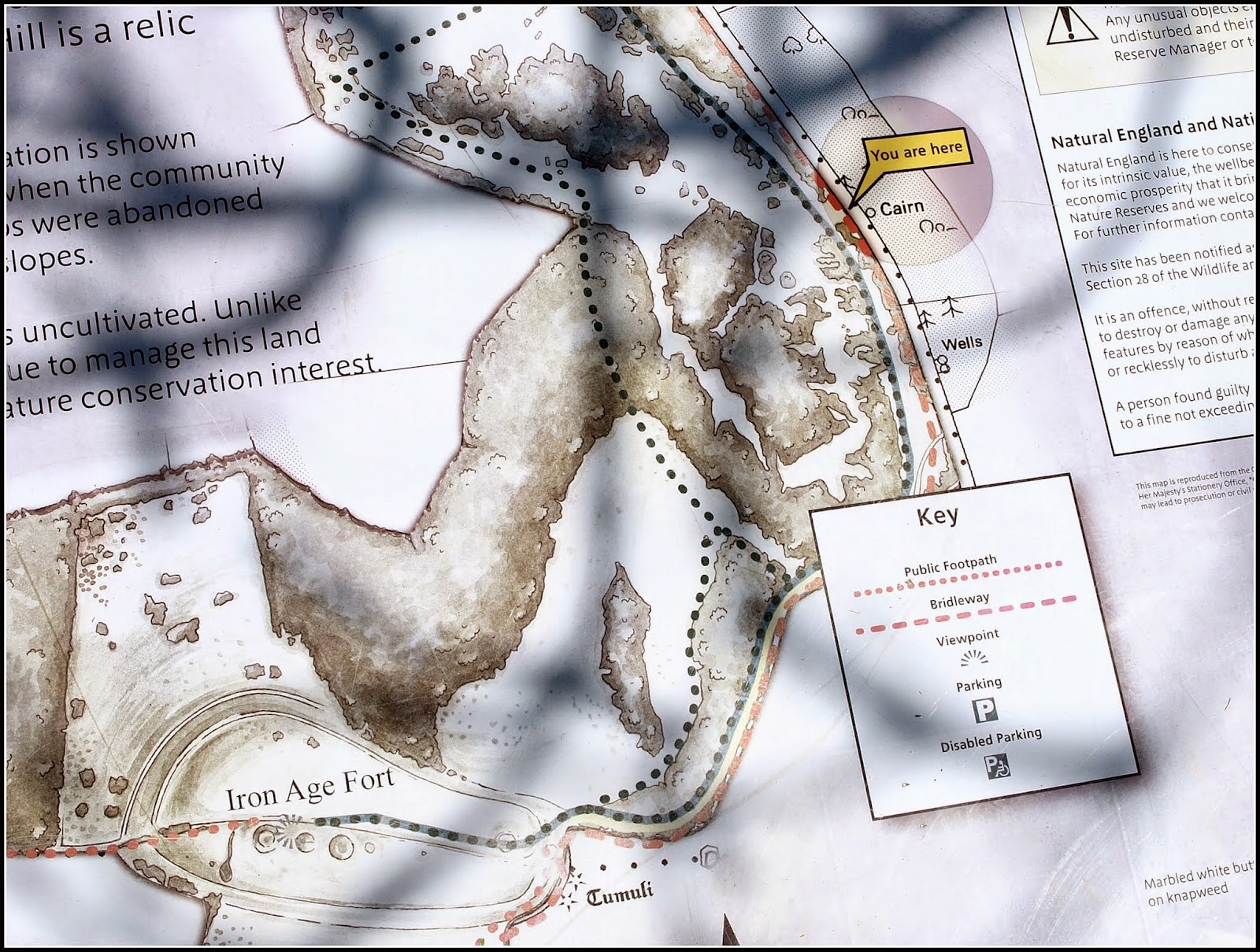 In this view you can see the ramparts of the fort on the distant hillside. From the top of the hill you can see for many miles, in practically every direction, and admire the beautiful rolling hills of Hampshire. 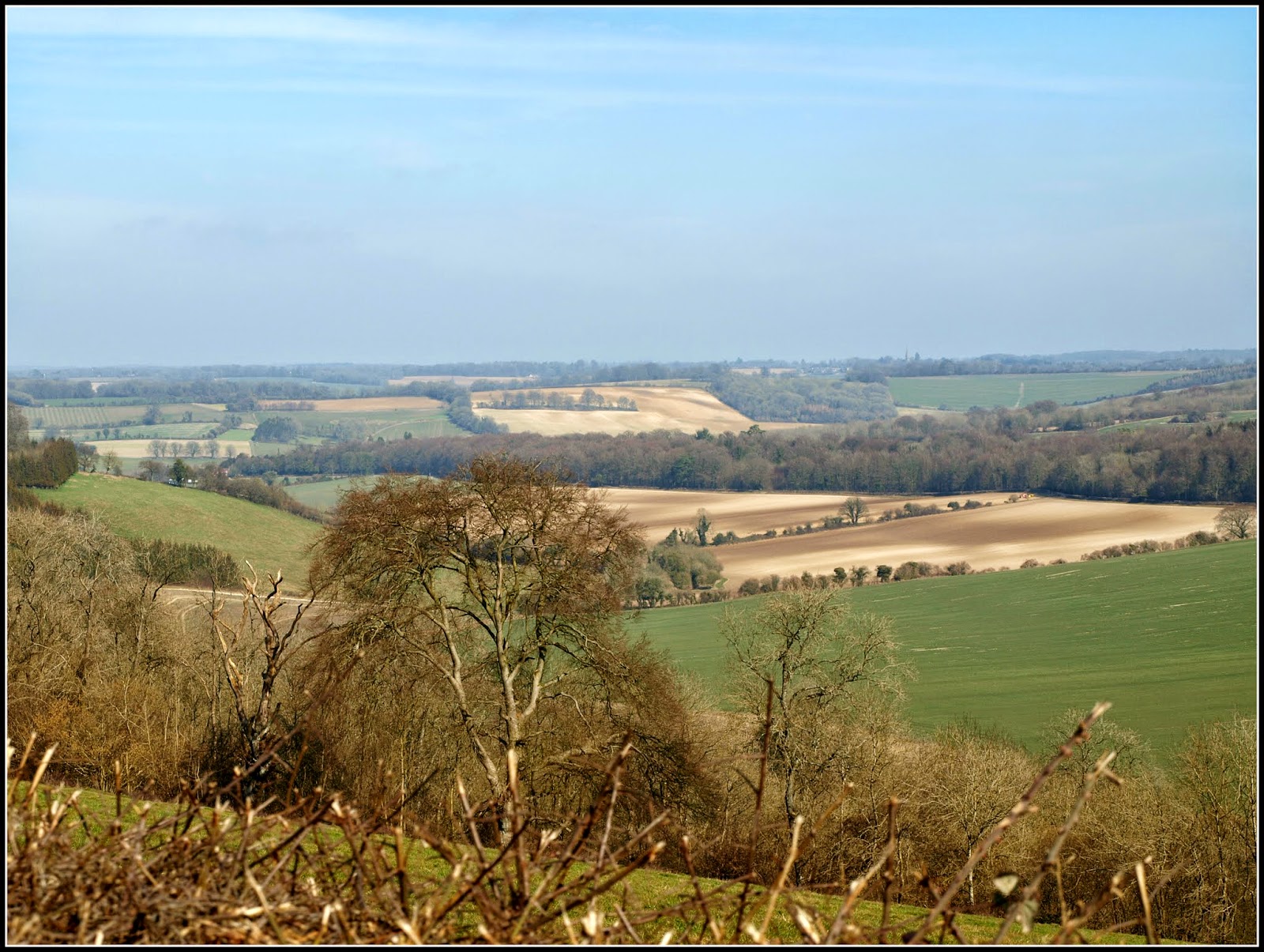 Although I live in a town, I am a country boy at heart, and I love the wide-open spaces. This place is so peaceful, and so sparsely-populated! 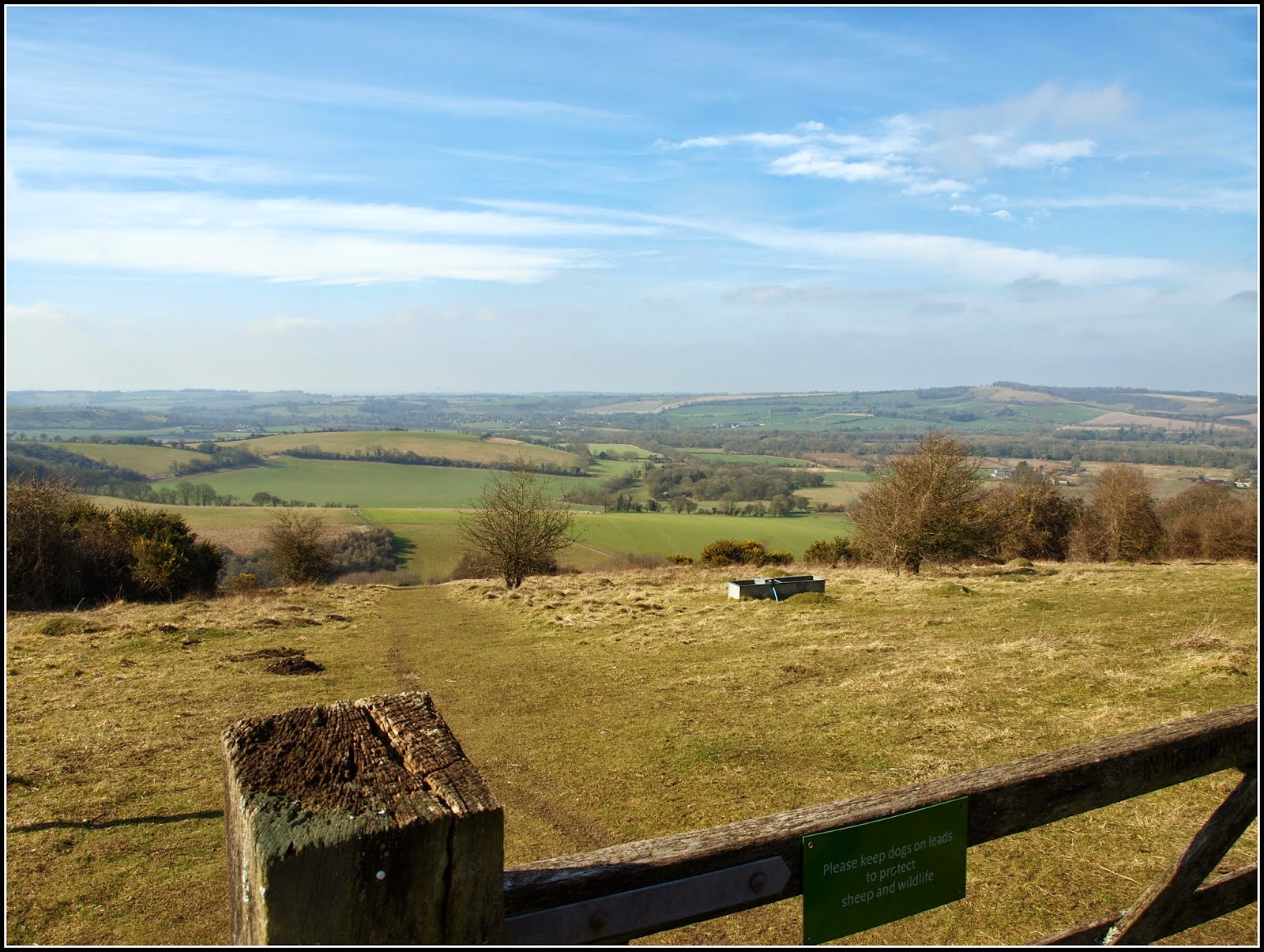 The site is criss-crossed with paths for walkers and horse-riders. 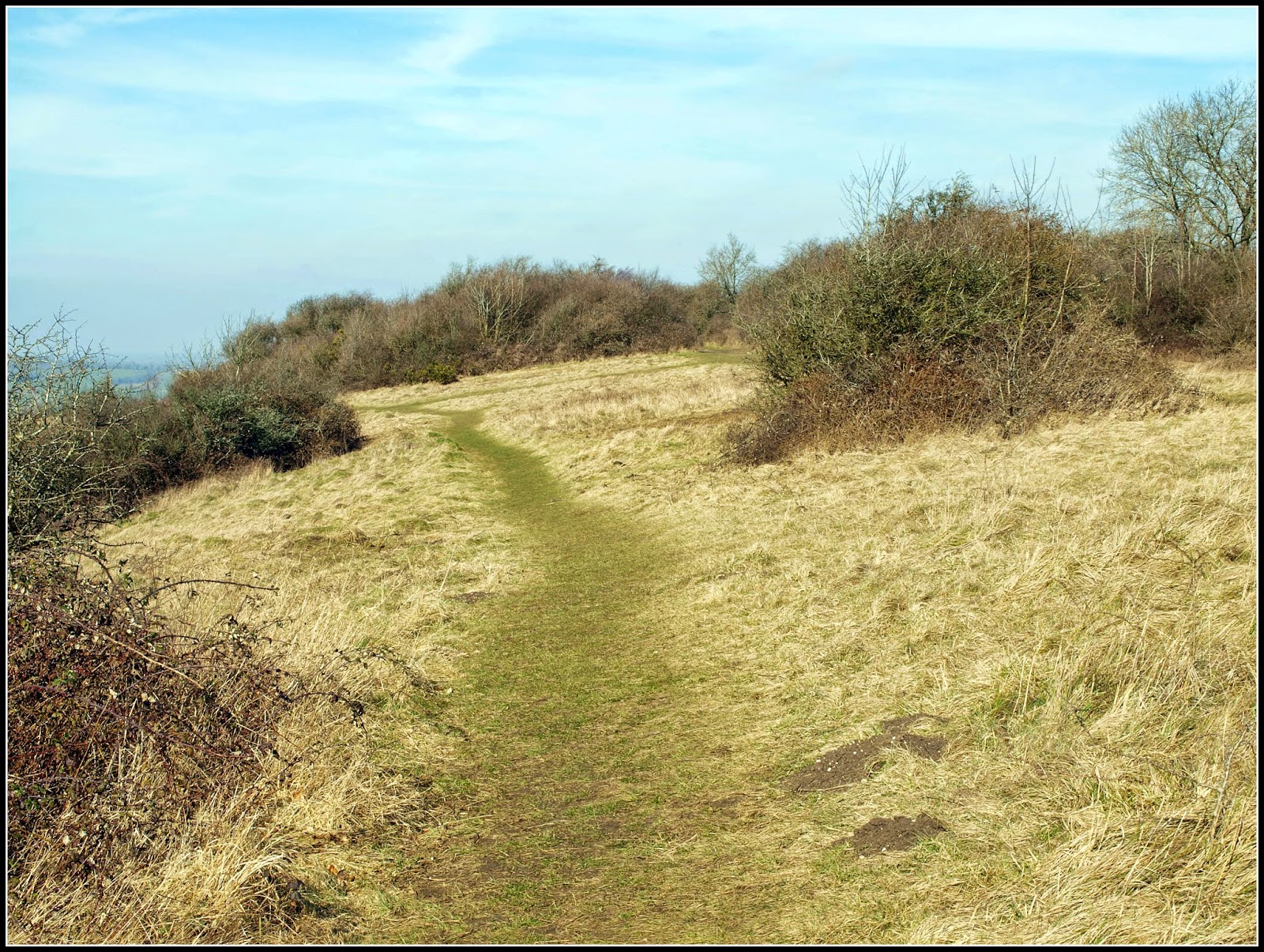 The sides of the hill are in places very steep, and sometimes it feels as if you are at the top of an amphitheatre. Can you see the little grey dots at the bottom of the hill in this next photo? They are sheep. I think they may have been Herdwick sheep, although that is a breed most commonly associated with Cumbria and the Lake District. They definitely had grey fleeces and white legs. 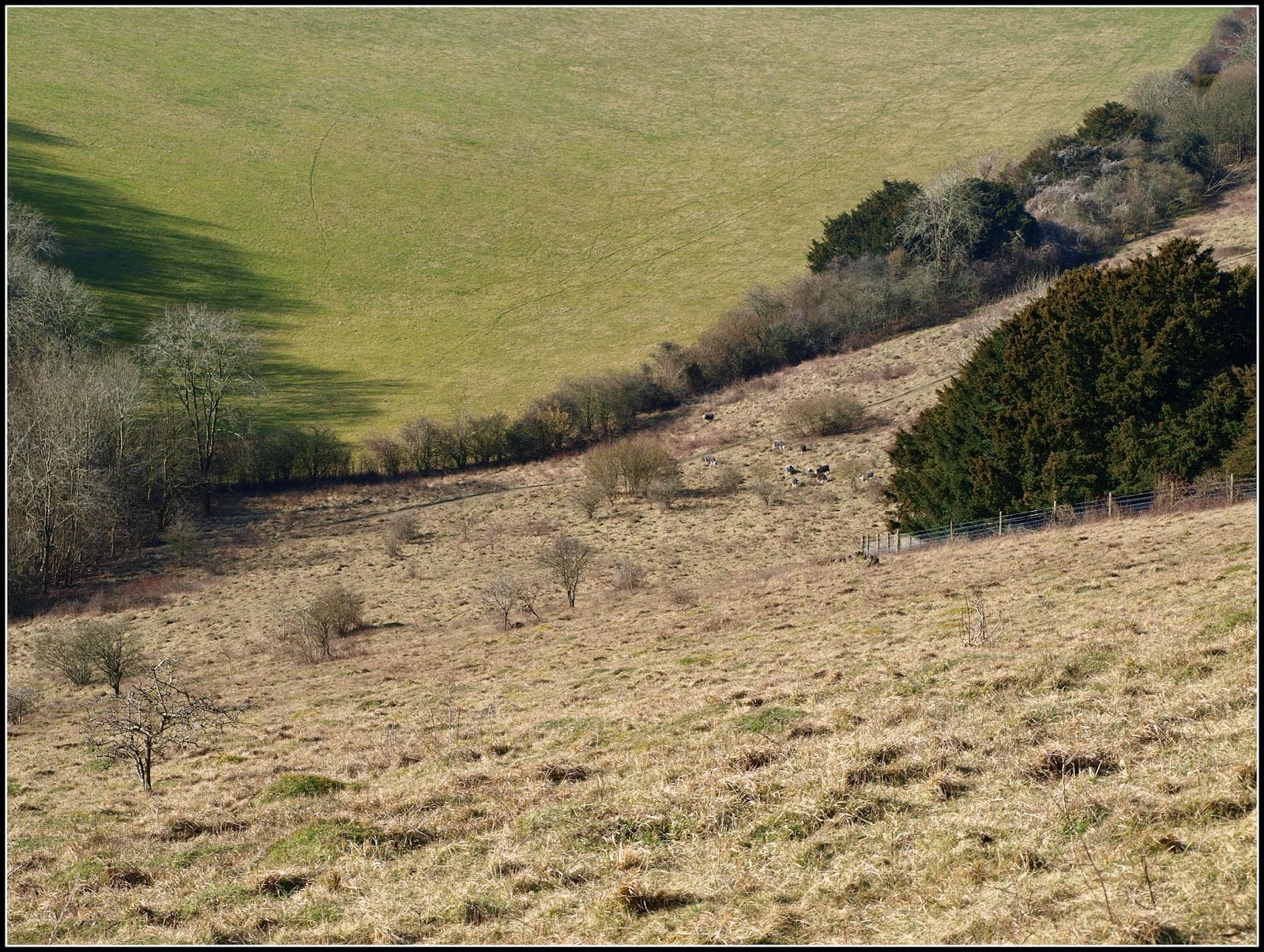 This notice gives a brief history of grazing, and the role of those sheep! Despite the fact that it is March, there was still plenty of flora and fauna in evidence. Many of the trees and bushes were festooned with the remains of last year's "Old Man's Beard" (Clematis vitalba): 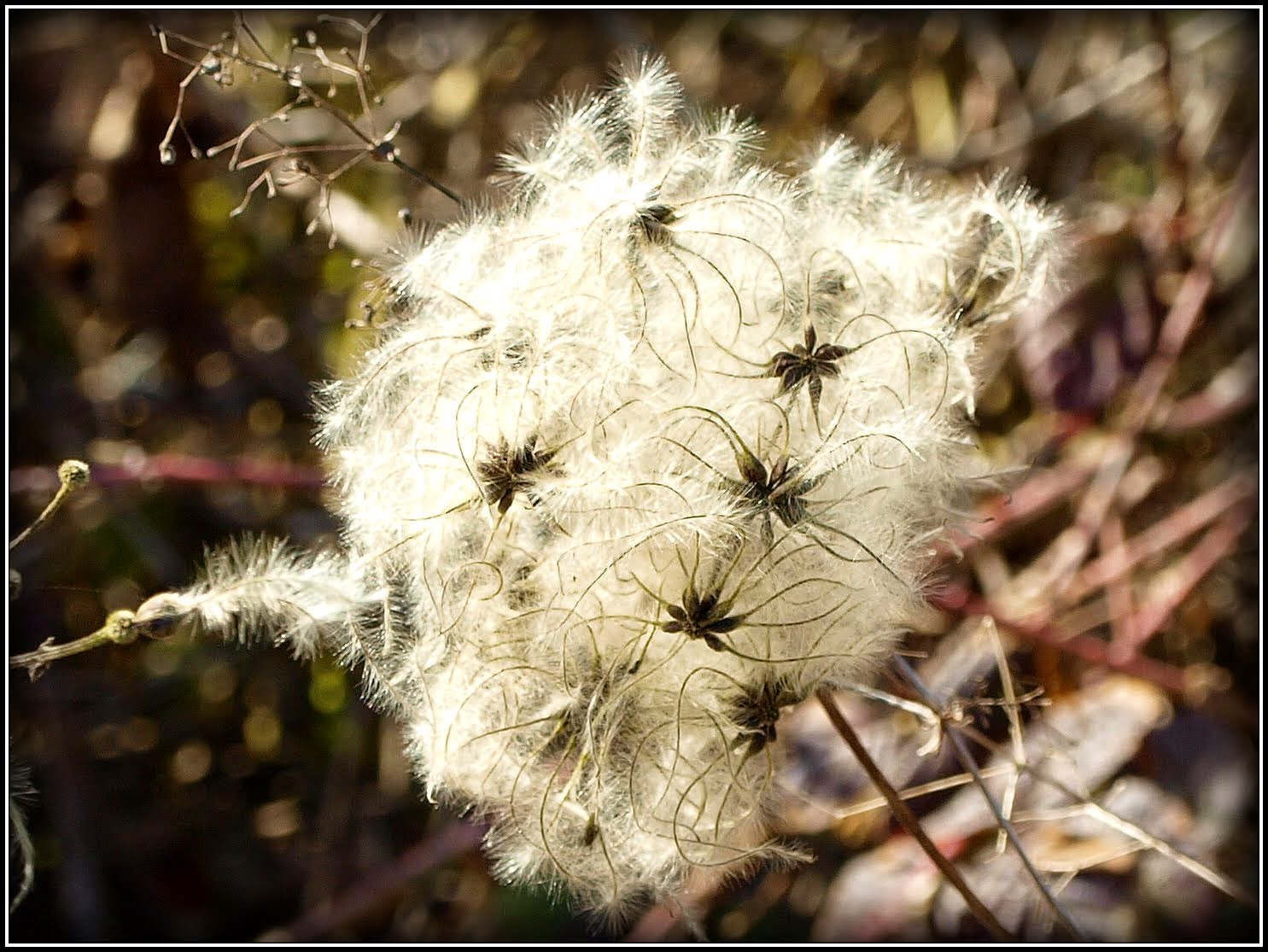 And there were signs of fresh new growth too, like these Snowdrops: 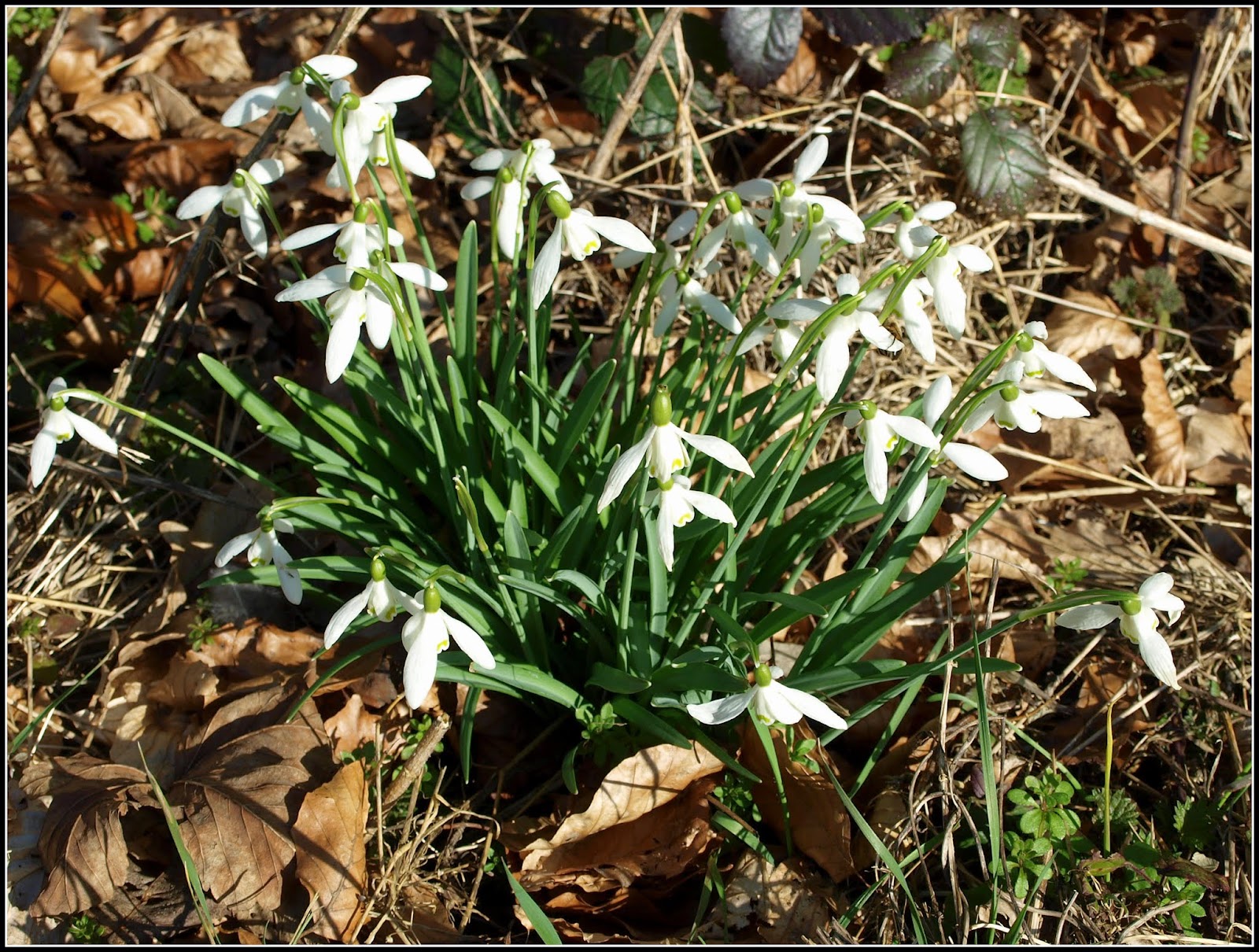 I kept my eyes peeled for fungi, and wasn't disappointed... 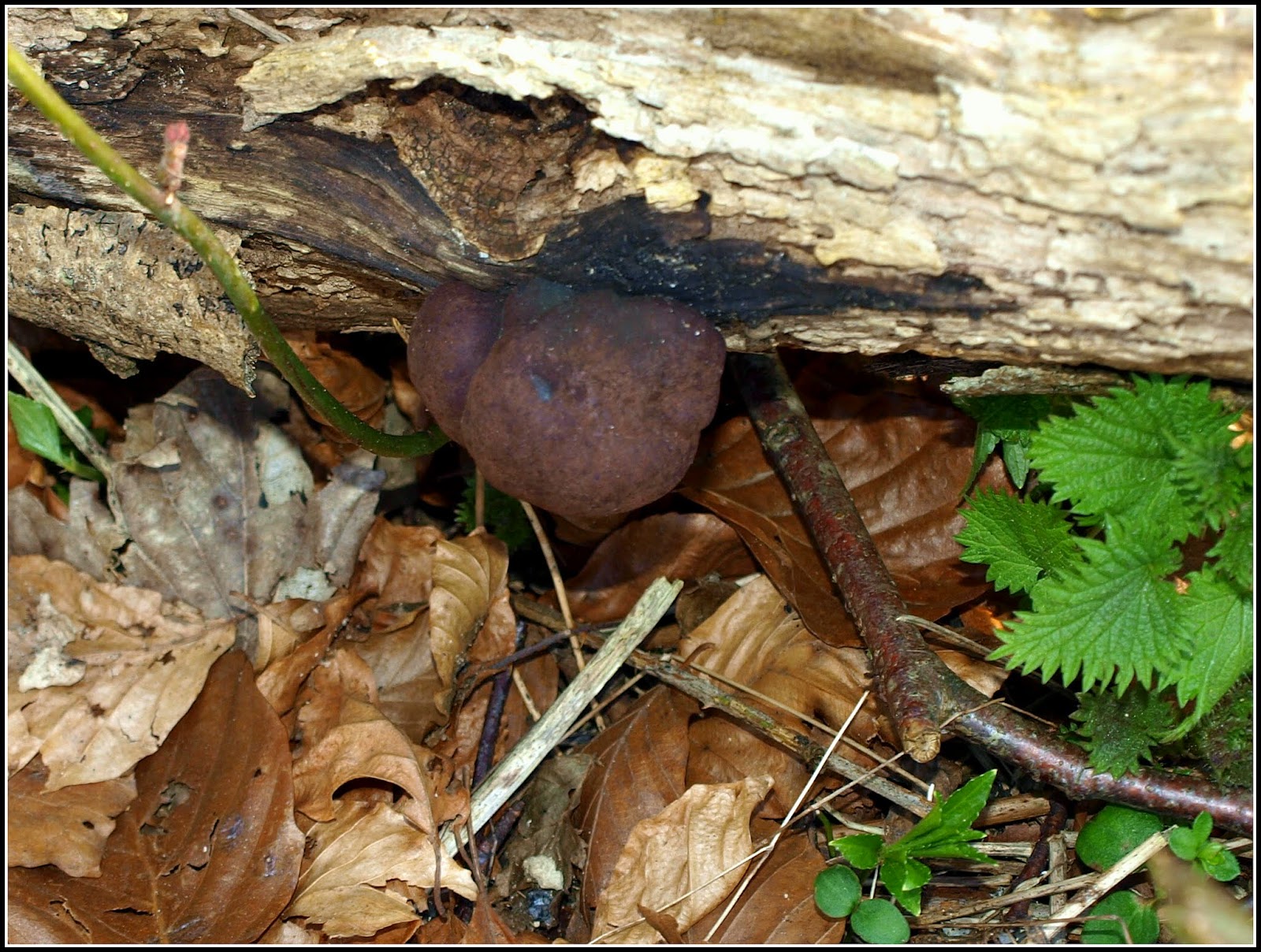 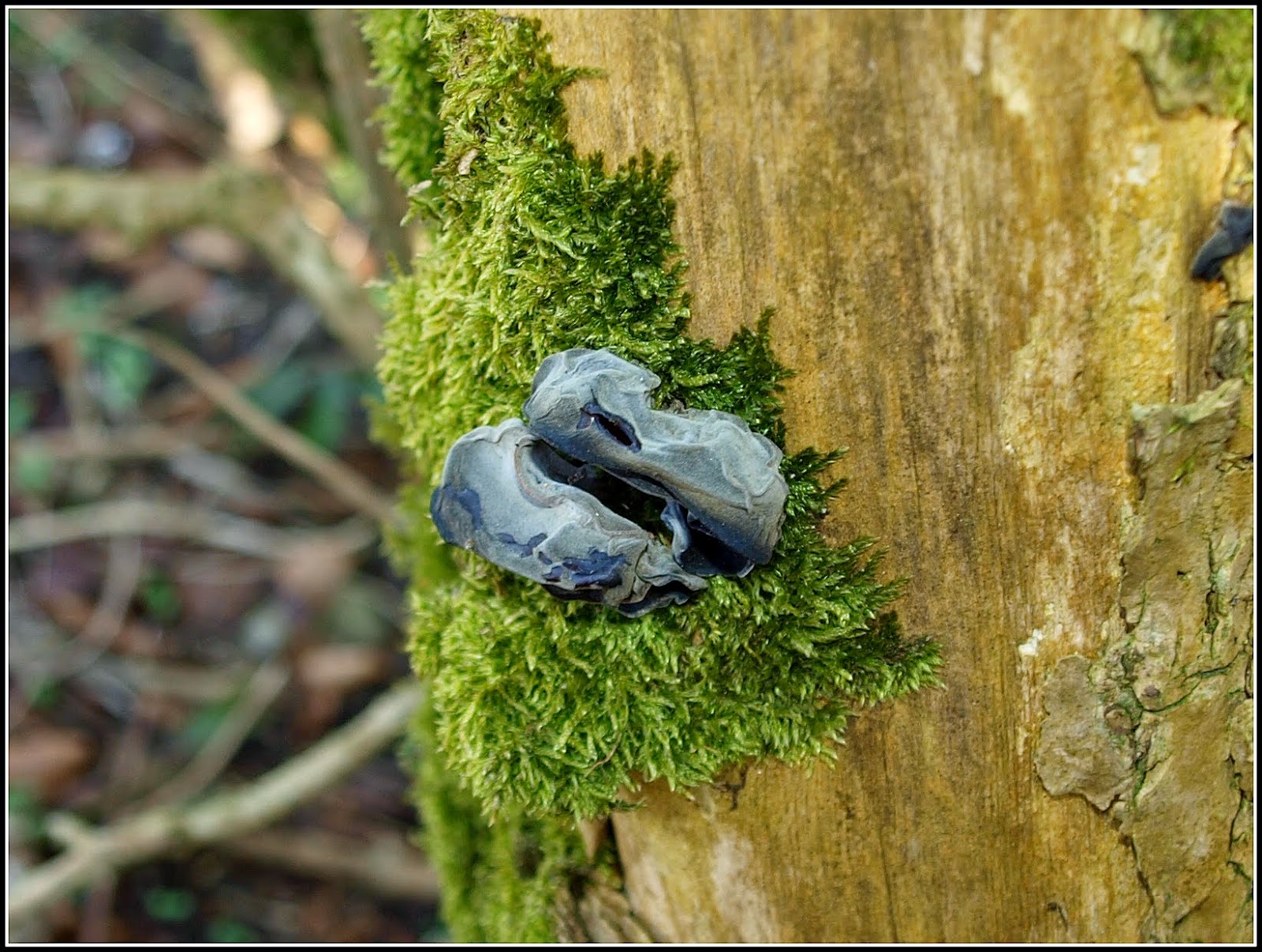 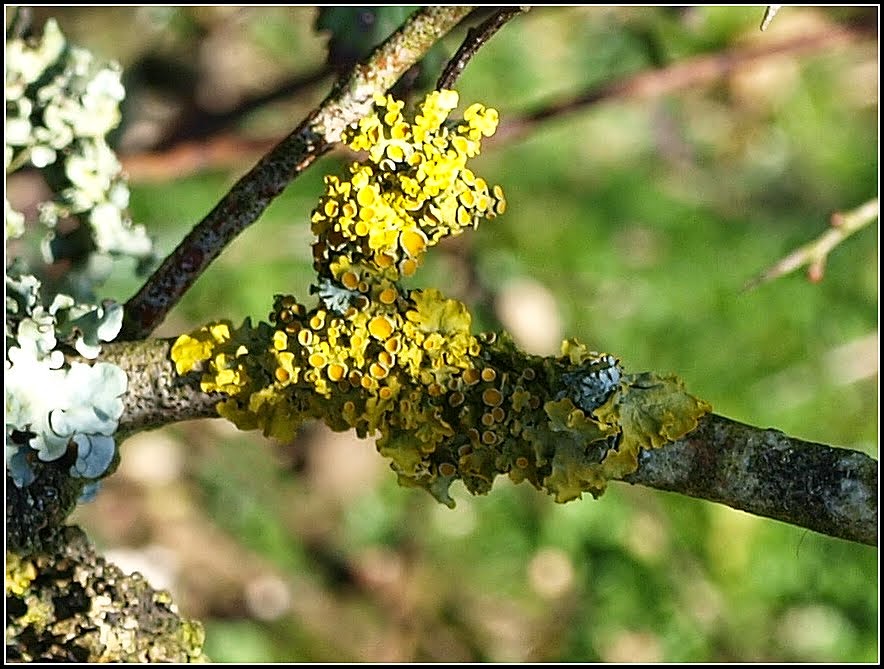 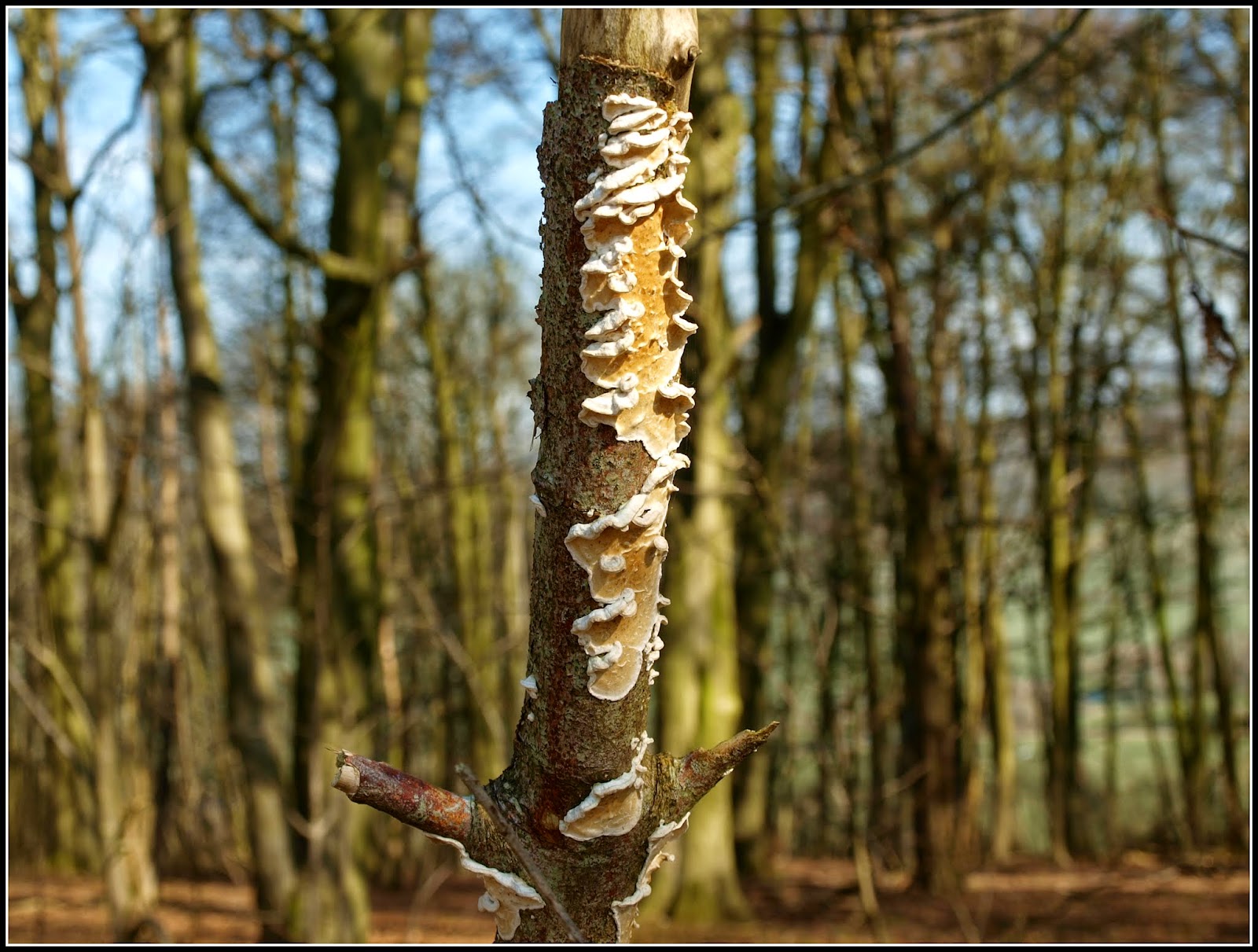 As you can see from the photos, the weather was brilliant on the day - bright sunshine and blue sky - but what the photos can't show is how cold it was! The top of the hill is completely exposed and it was really draughty, so it was actually quite a relief to get down to the bottom, into the Meon valley. Fortunately there is a good pub nearby (The George and Falcon), in which we had a very nice lunch, including some great local ingredients. I had a platter of Loosehanger cheeses, garnished with watercress. This part of Hampshire is watercress country par excellence. The cold clear chalk streams provide the best conditions possible for cultivating this tasty vegetable. About 300 metres from the pub is a watercress farm, where I took these photos: 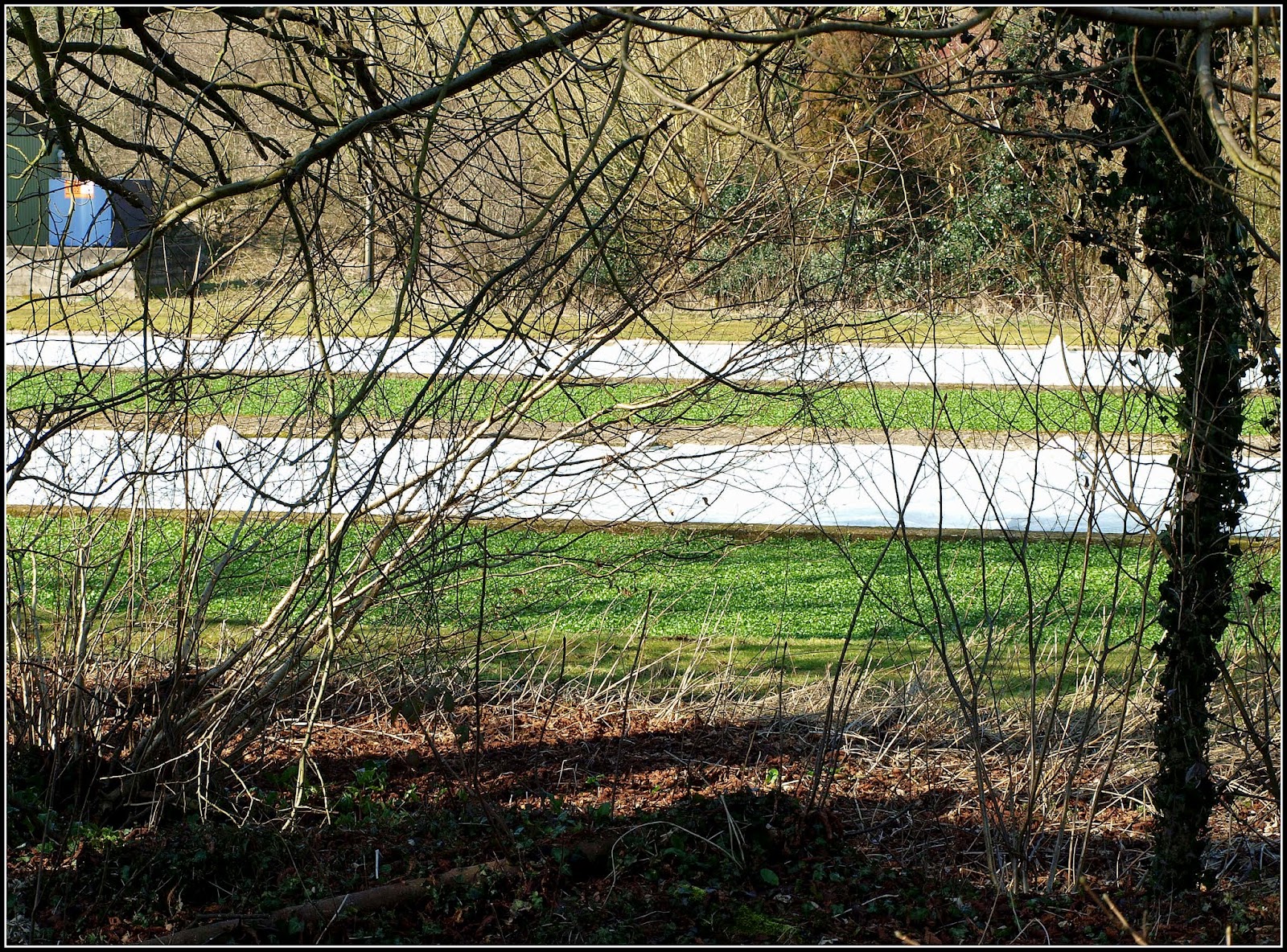 The watercress is grown in long narrow beds, through which the water flows. On the bigger farms (think "Vitacress" here) when the crop is ready for harvesting a cutting-machine moves along the bed slicing the shoots away from the roots like a massive razor! On the smaller farms, watercress is still picked by hand. The picker sits / kneels / lies on a plank and snips off the cress with a big knife.

The strips of white in these photos are horticultural fleece, helping young watercress to keep warm, and thus grow quicker. After lunch we drove home through the country lanes, via the village of Alresford, which has lots of nice little independent shops.


Since it was Saturday afternoon, there wasn't much choice produce in any of the shops that we like to visit, but I did at least get one little treat - a good old Hampshire Lardy Cake. All things considered, it was a good day out!
Posted by Mark Willis at 12:00