Sausage and lentils with roasted squash

Saturday is normally my day to prepare Dinner. During the week Jane does most of the cooking because I'm usually out at work. This is last weekend's offering. 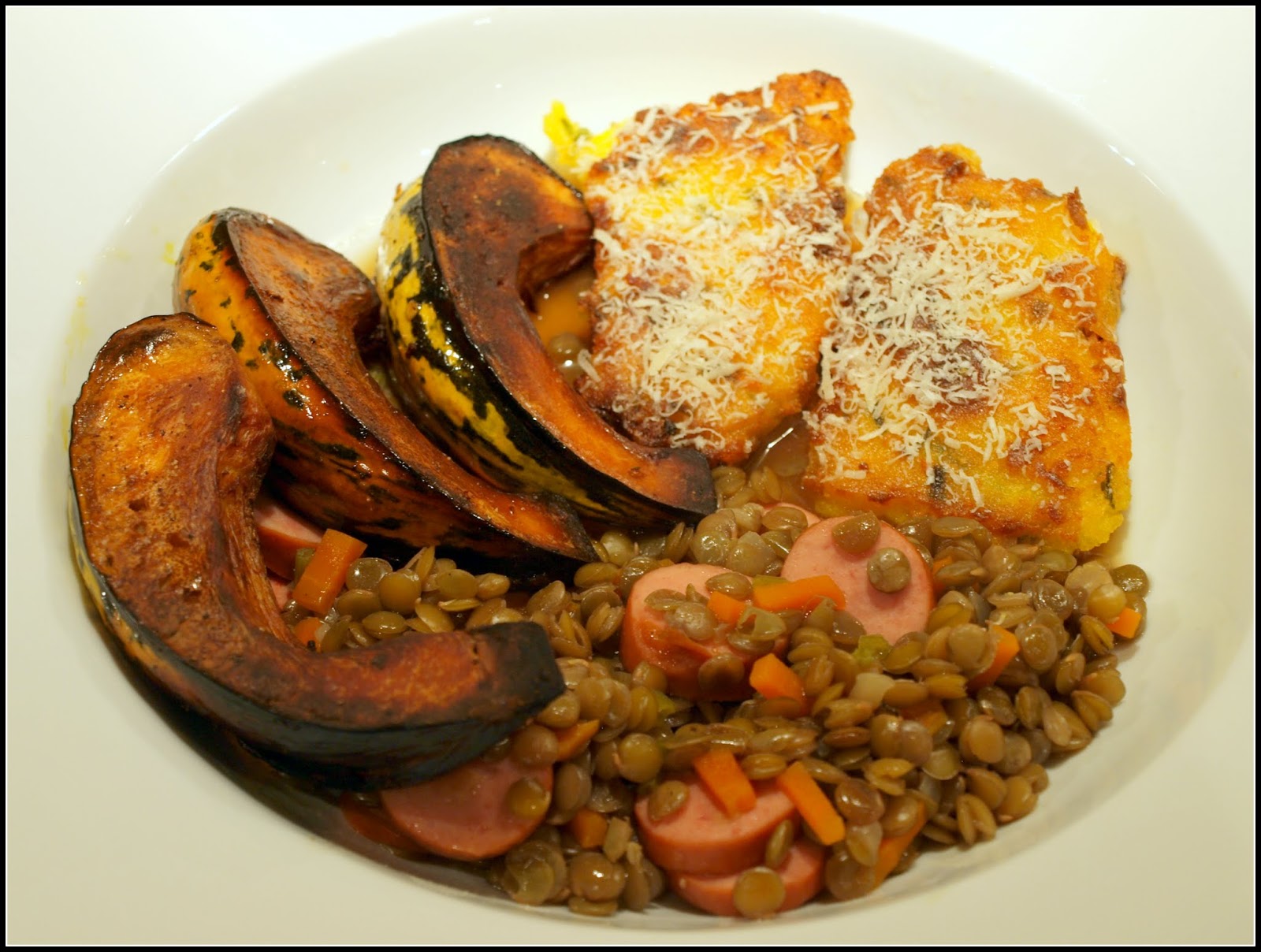 For quite a while now I have been wanting to do a dish involving green lentils. I had nothing specific in mind - I just wanted lentils. They don't have a lot of flavour of their own, but they are very good at taking on flavour from other ingredients, and of course they have high nutritional value and contribute lots of fibre.

My lentil dish started off 8 hours in advance, by soaking the dry lentils. I then simmered them gently for about 35 minutes until they were soft. (Remember, don't add salt to pulses like lentils until after they are cooked, otherwise they never go tender). I rinsed the cooked lentils and then put them in a pan with enough chicken stock to cover them to a depth of about an inch. Meanwhile I cooked up a "soffritto" of finely-diced carrots and onion, with the addition of some of the mature stalks of my Celery Leaf plants. Normally of course, one would simply add "proper" celery! 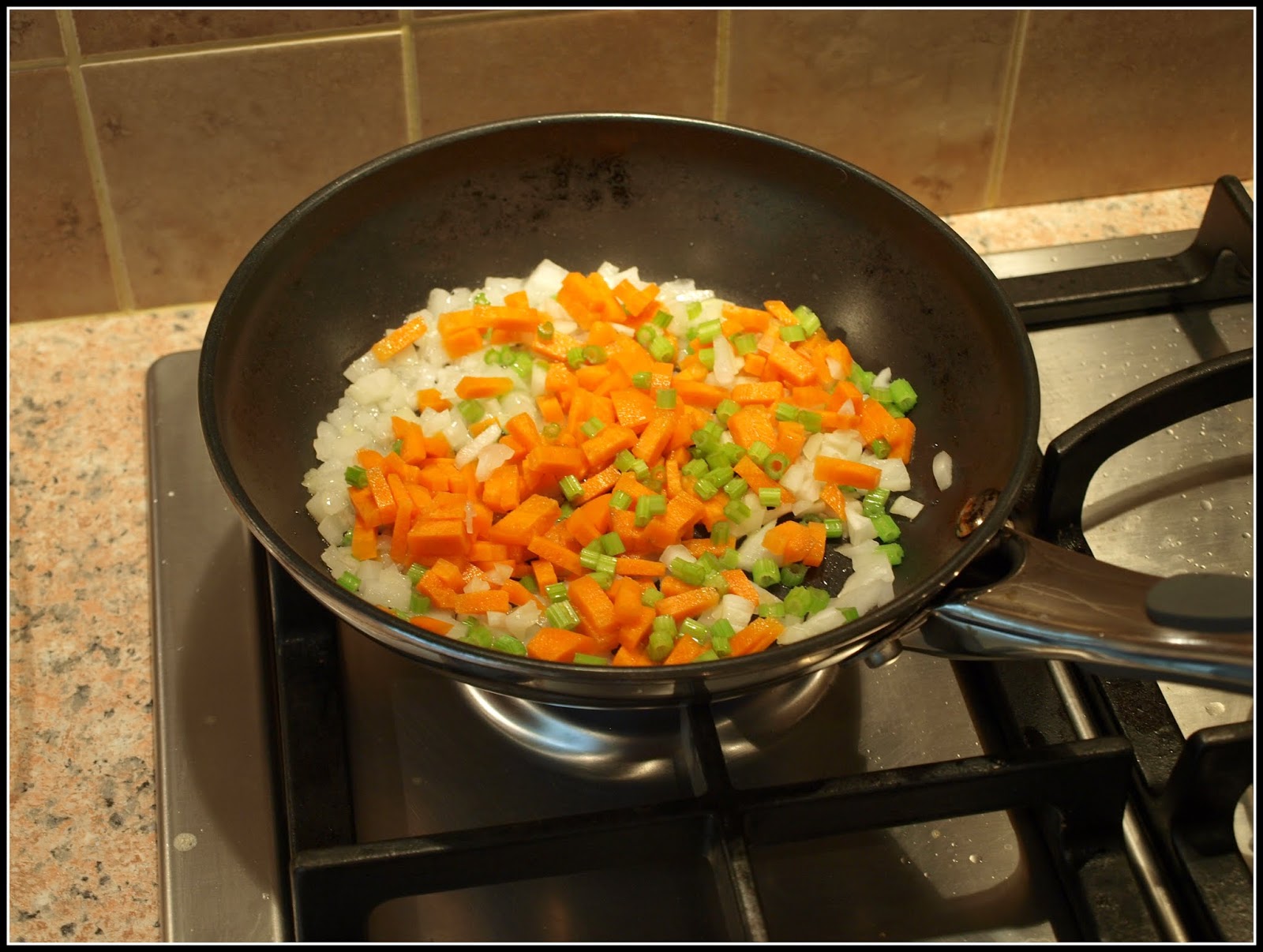 Once the vegetables were cooked but not browned, I added them in with the lentils and stock. I then brought the stock to the boil and turned off the heat. This meant that the lentils would slowly absorb the flavours, without cooking any further. I am a big fan of home-made chicken stock, which we always make with the leftovers whenever we have a roast chicken. In my opinion good stock is the key factor in most soups, stews and casseroles.

Meanwhile, I prepared some polenta. I made it up very thick (NB: use a non-stick pan if you are doing this), so that it would solidify when it cooled. I added a generous quantity of snipped fresh chives to give it more flavour. When it was done I turned it out onto some non-stick paper arranged on a baking-tray, and roughly flattened it to a depth of about an inch, before putting it in the fridge to cool. 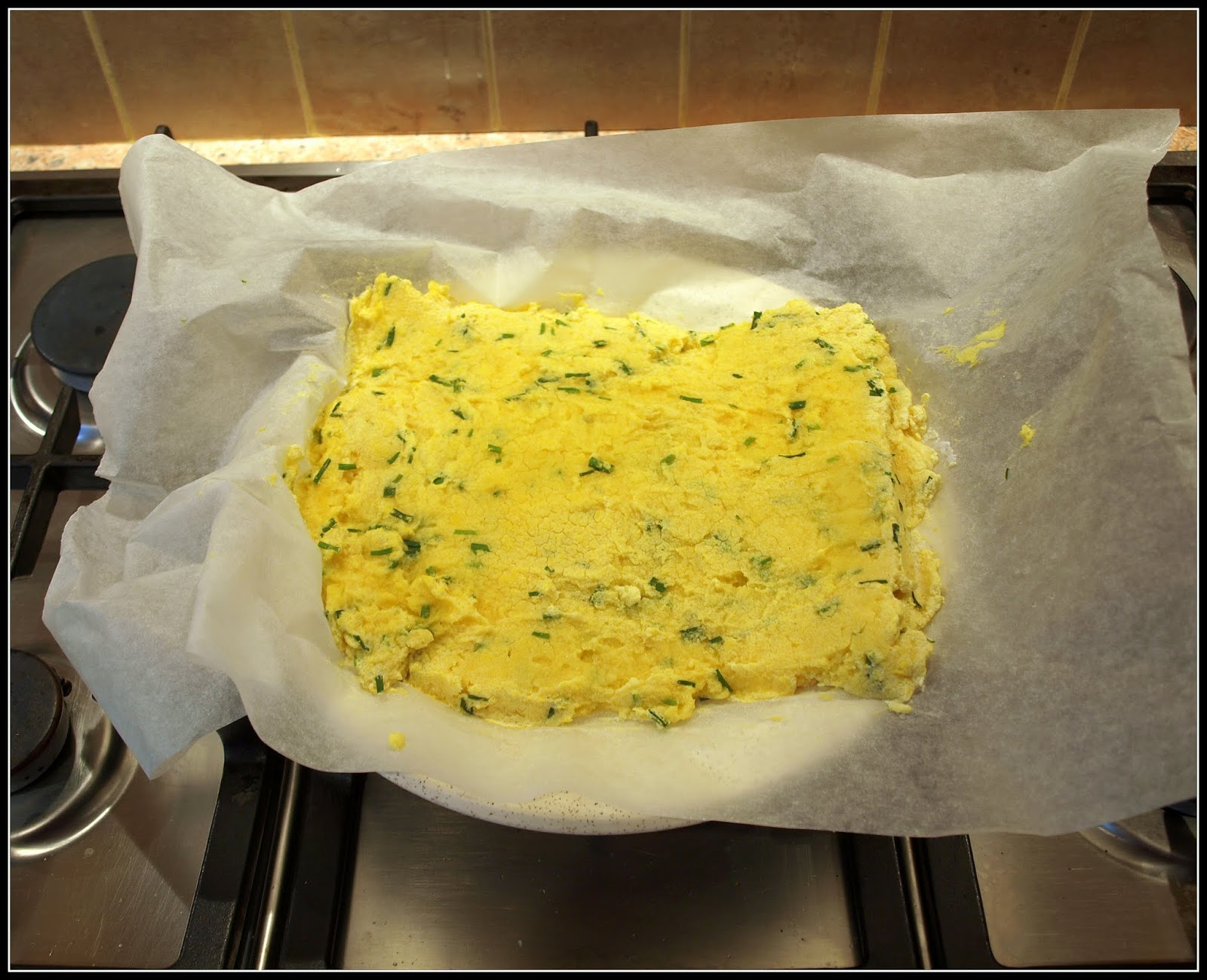 Later, just before dinner-time, I cut the polenta into large rectangles prior to frying it in vegetable oil until crisp and golden on the outside, but still soft in the middle: 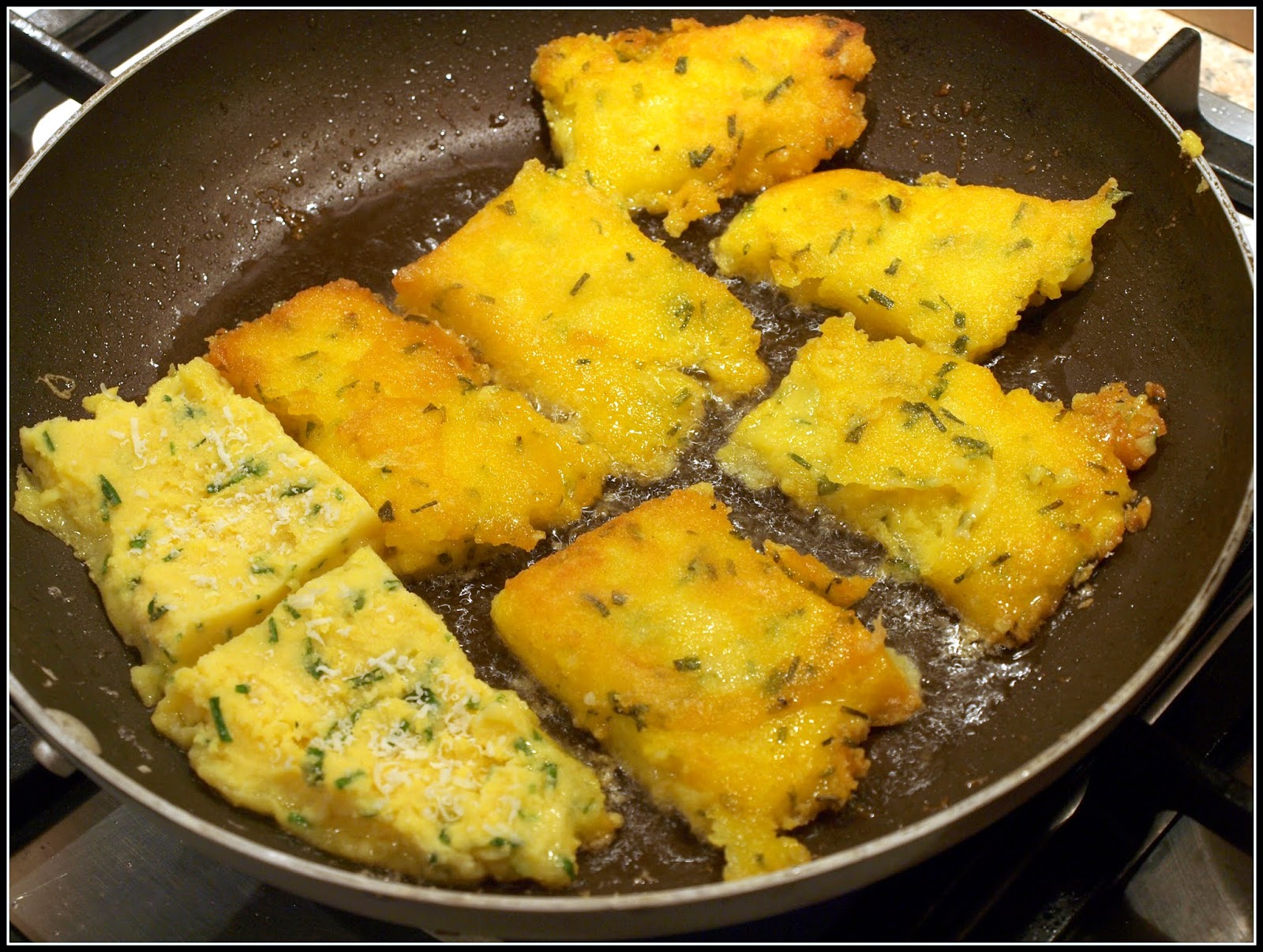 Before serving it I grated a little Parmesan cheese over the top of the polenta. 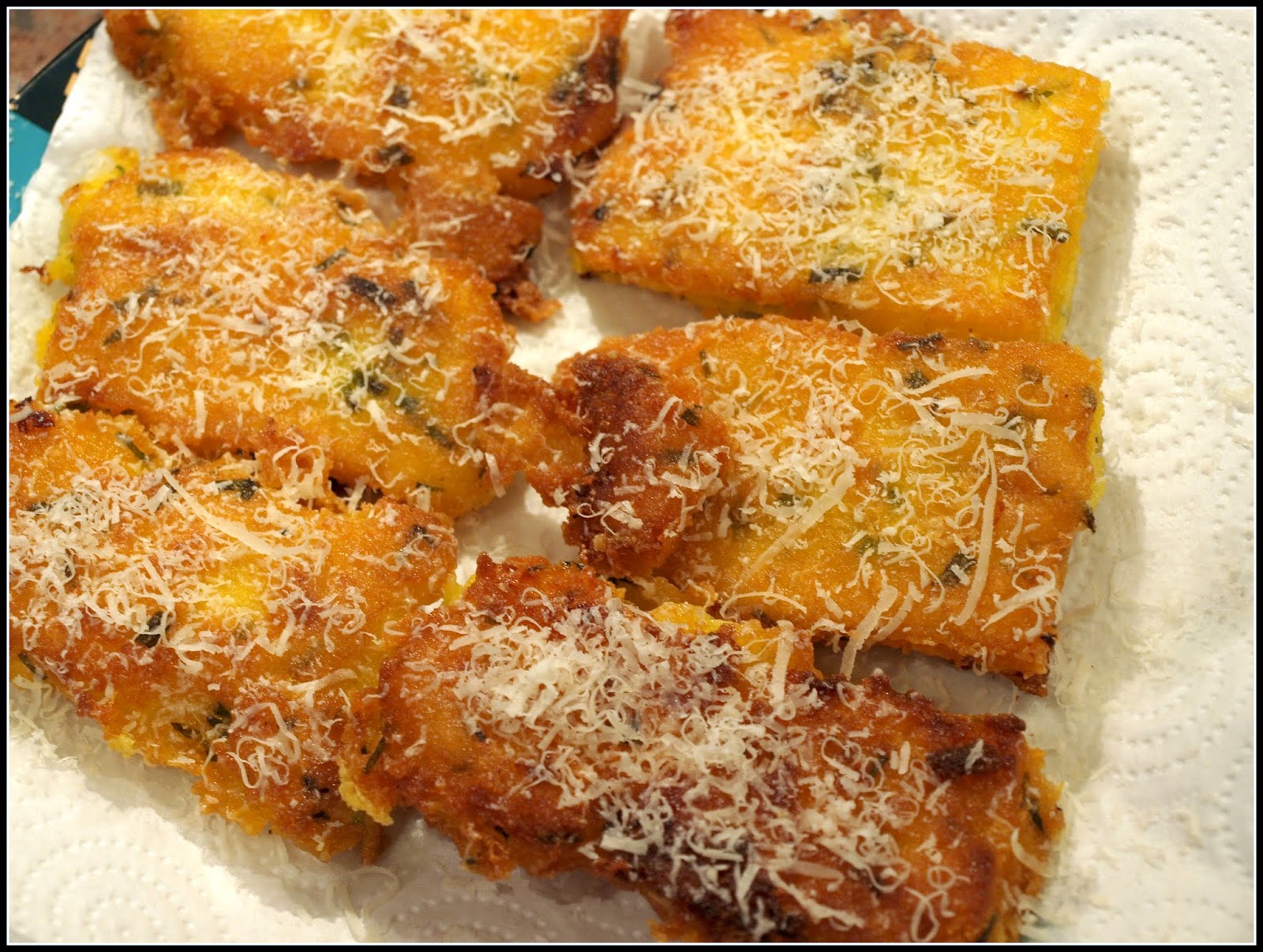 The third main element of the meal was some roasted squash. I confess that I bought this one, because I have not got any squashes in my own garden. It is a "Harlequin": 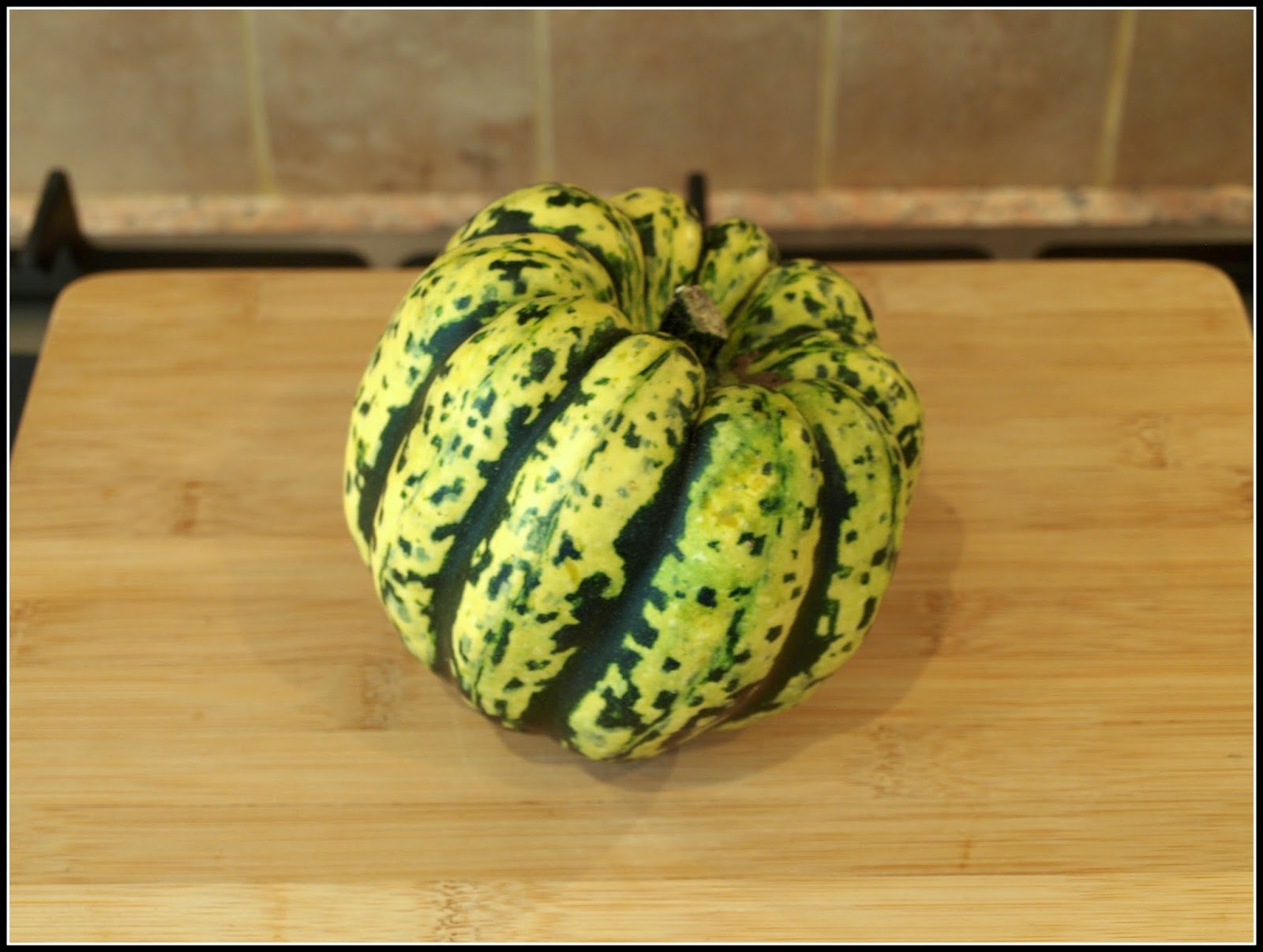 I cut it, using the ridges as a guide, into thick wedges, which I then doused in olive oil, before placing them on a baking-tray and adding ground black pepper and a few chilli flakes. 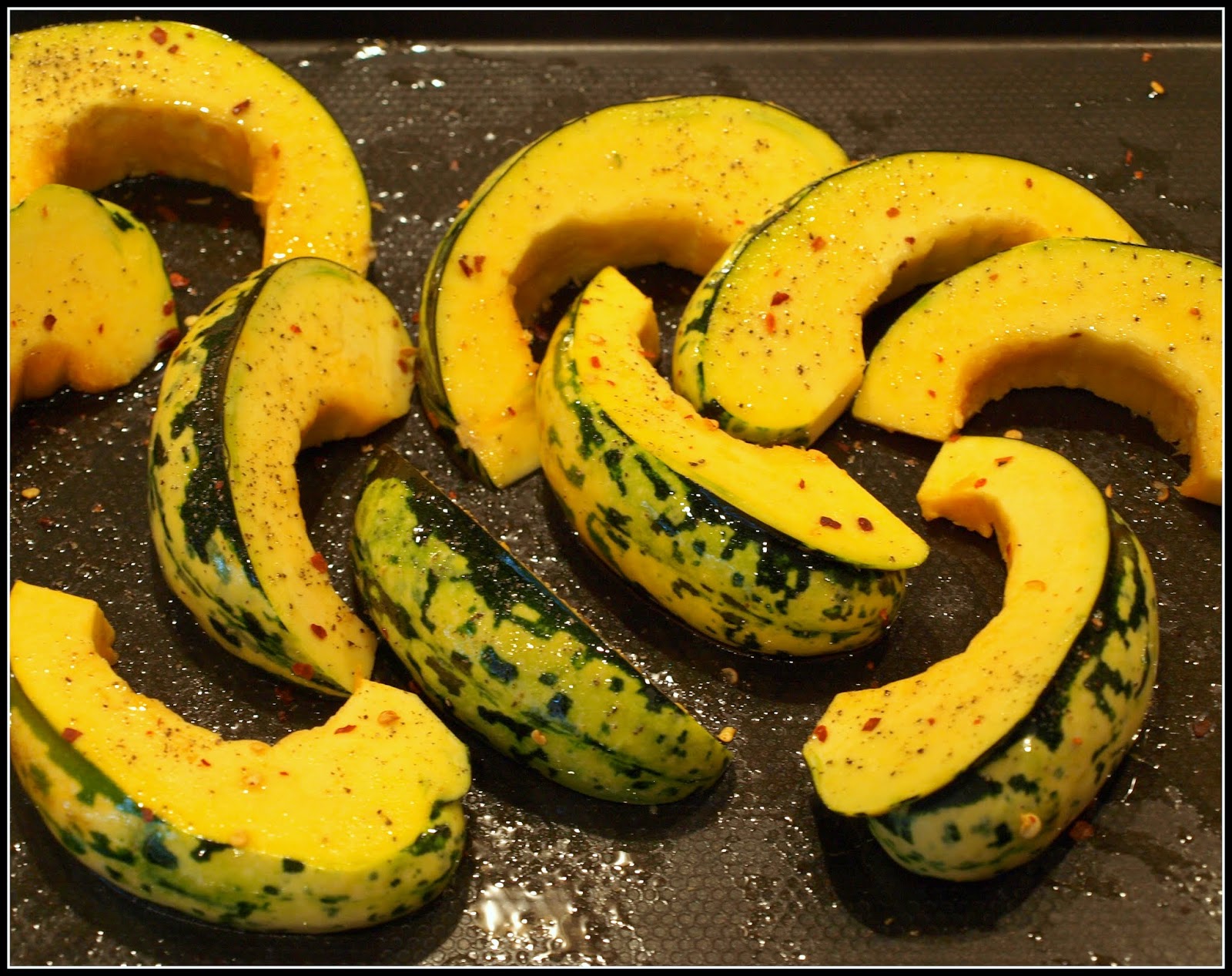 The squash was then roasted at 170C for about 40 minutes, by which time it was nicely brown. 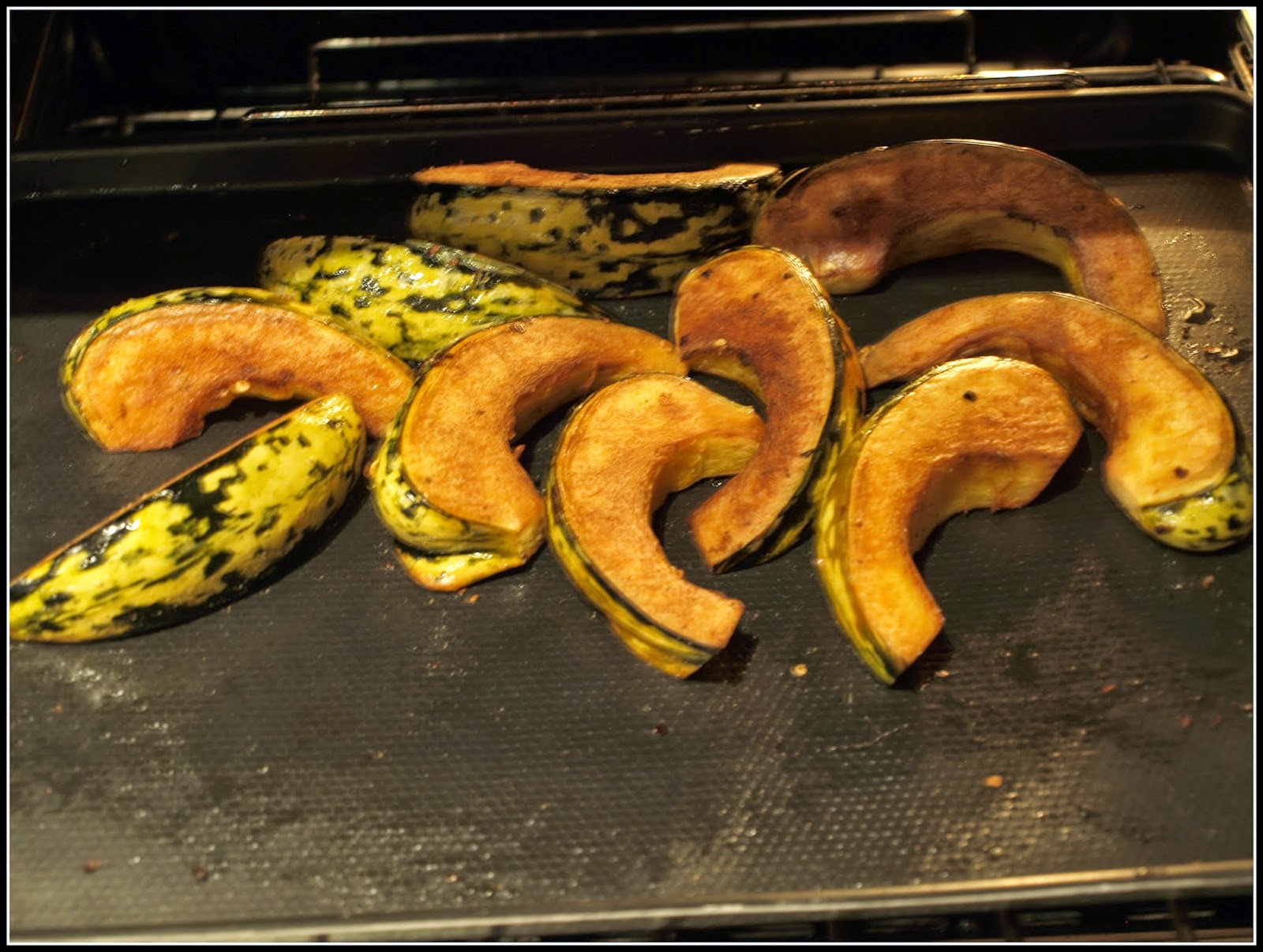 I didn't know exactly what to expect from a Harlequin squash, because I have never cooked one before. I had expected it to go quite soft - like Butternut would - but it didn't. It remained firm, rather like the texture of a nice baked potato, and the flesh was dryish and nutty in flavour. Even though the skin went very brown, it was good to eat - just like potato skins.

About a quarter of an hour before serving time, I started to slowly warm up my lentils, and at that time I added the sausage: 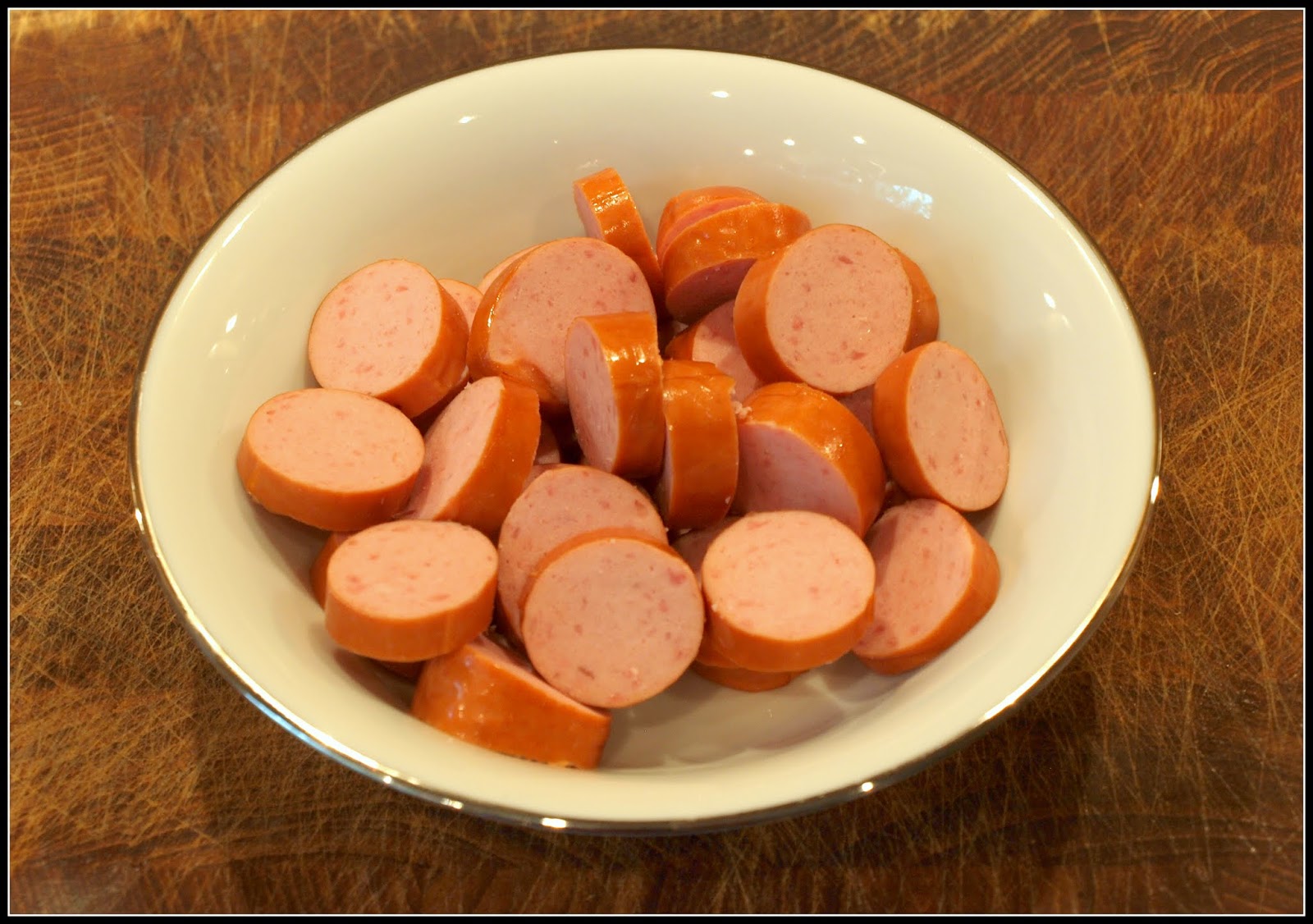 This was pre-cooked ready-to-eat sausage, the smoked version (made by Mattessons, and widely available in supermarkets). Incidentally, this is a great product to have in your fridge as a stand-by, because it has a very long shelf-life. 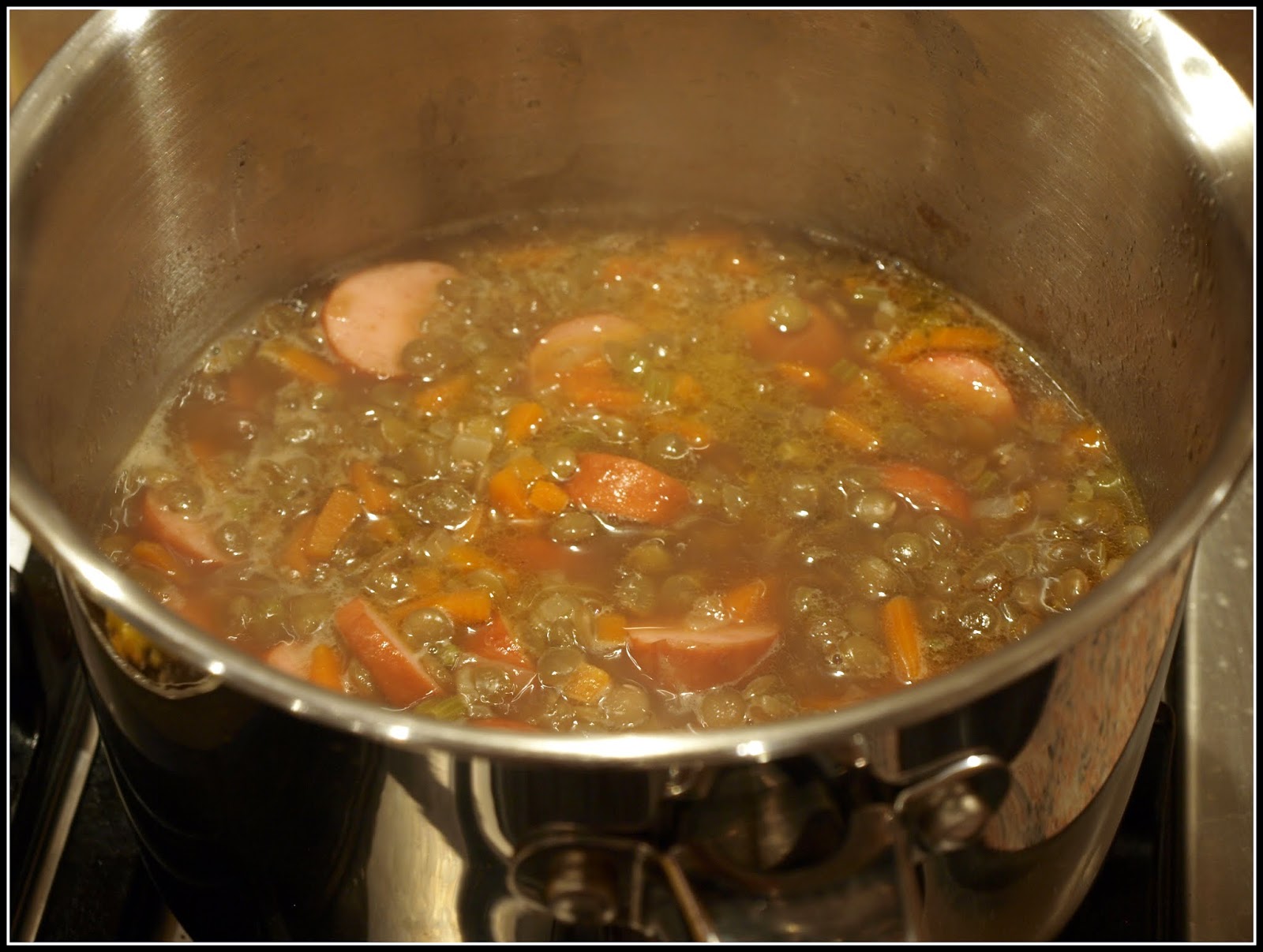 Although the preparation of this meal may have sounded complicated, each part was very easy to do. Furthermore, none of the timings was critical. For instance, the polenta could easily have been kept warm for a while if necessary, and the lentil and sausage dish likewise.

So here we are then - the finished dish: 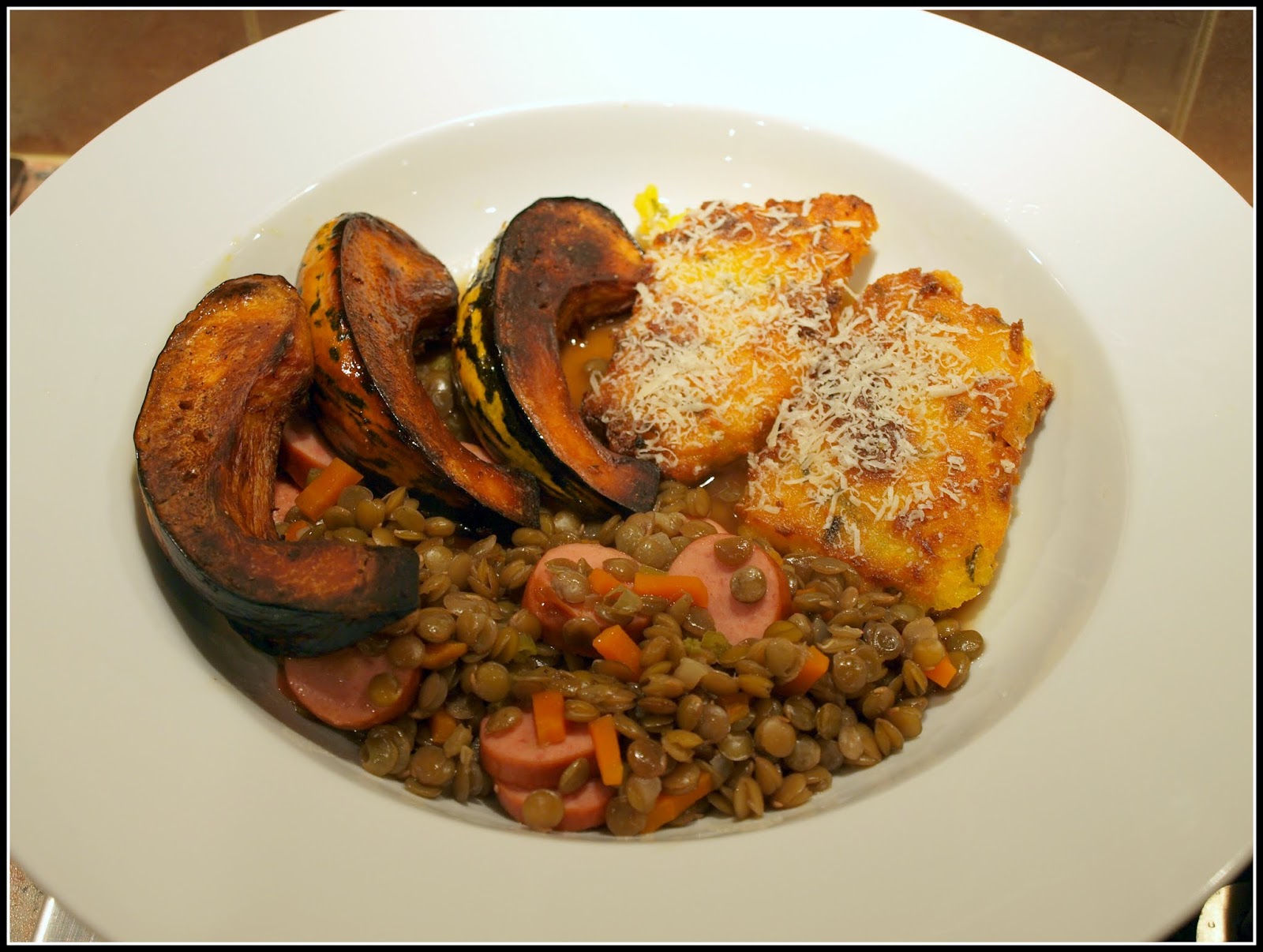 In retrospect I wish now I had done something green to go with it - maybe some beans or a few florets of broccoli - because the overall effect is a bit "monochrome", but nevertheless I was very happy with the tastes and textures. The crispy cheesy polenta contrasted nicely with the soft lentils, and the nutty, floury squash with its crunchy skin was an interesting addition to the overall effect. I have to say though, that without the depth of flavour contributed by the chicken stock, those lentils would have been much less satisfying!
Posted by Mark Willis at 12:00