Since my recent post about chillis was very popular, here's another one! In this one I show off some of the chilli fruits I harvested yesterday. 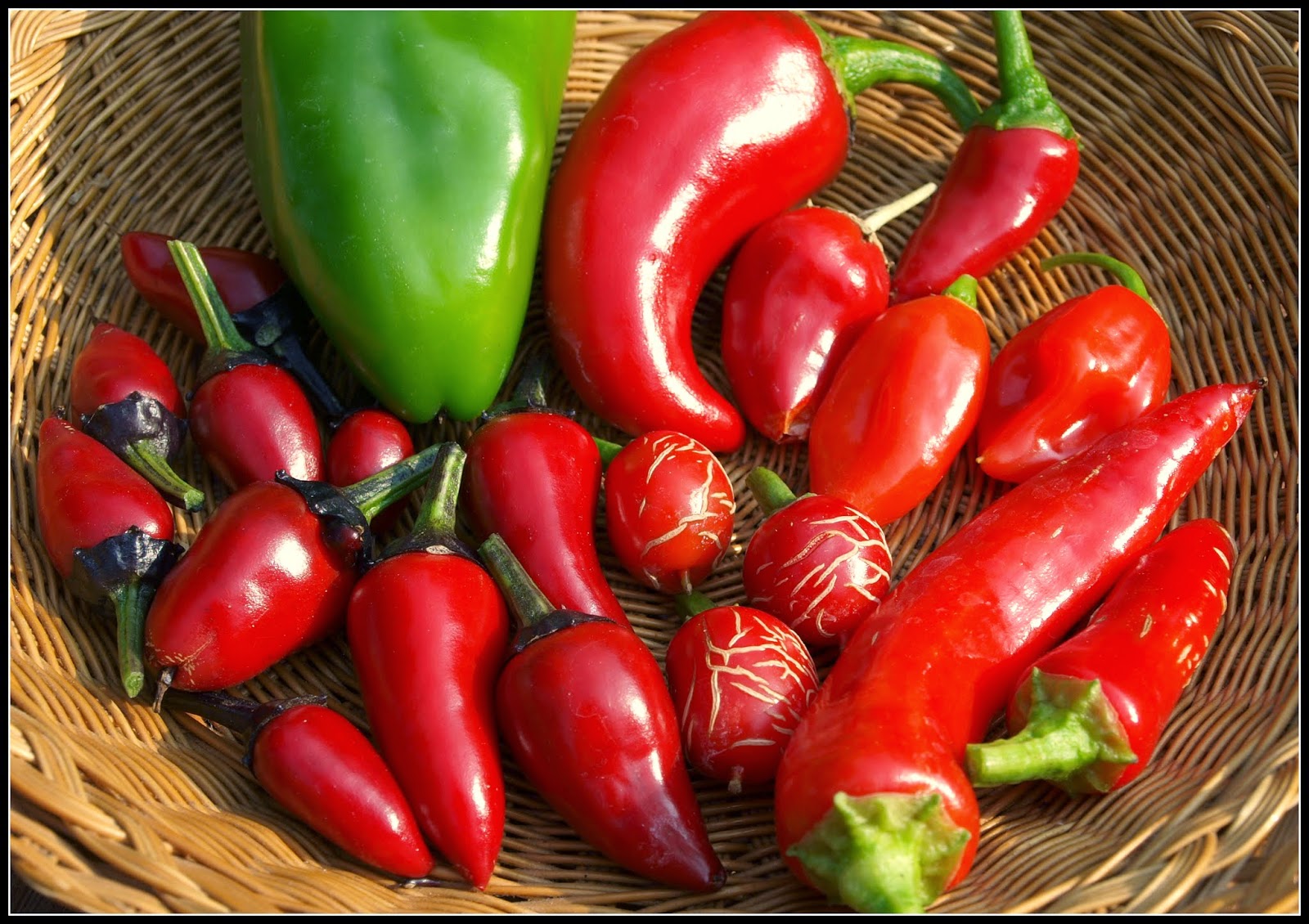 The chilli harvest this year is a bit of a mixed bag. Nothing has produced a big crop, and one or two have produced some seriously weird fruits, but nonetheless there are some good ones amongst them: 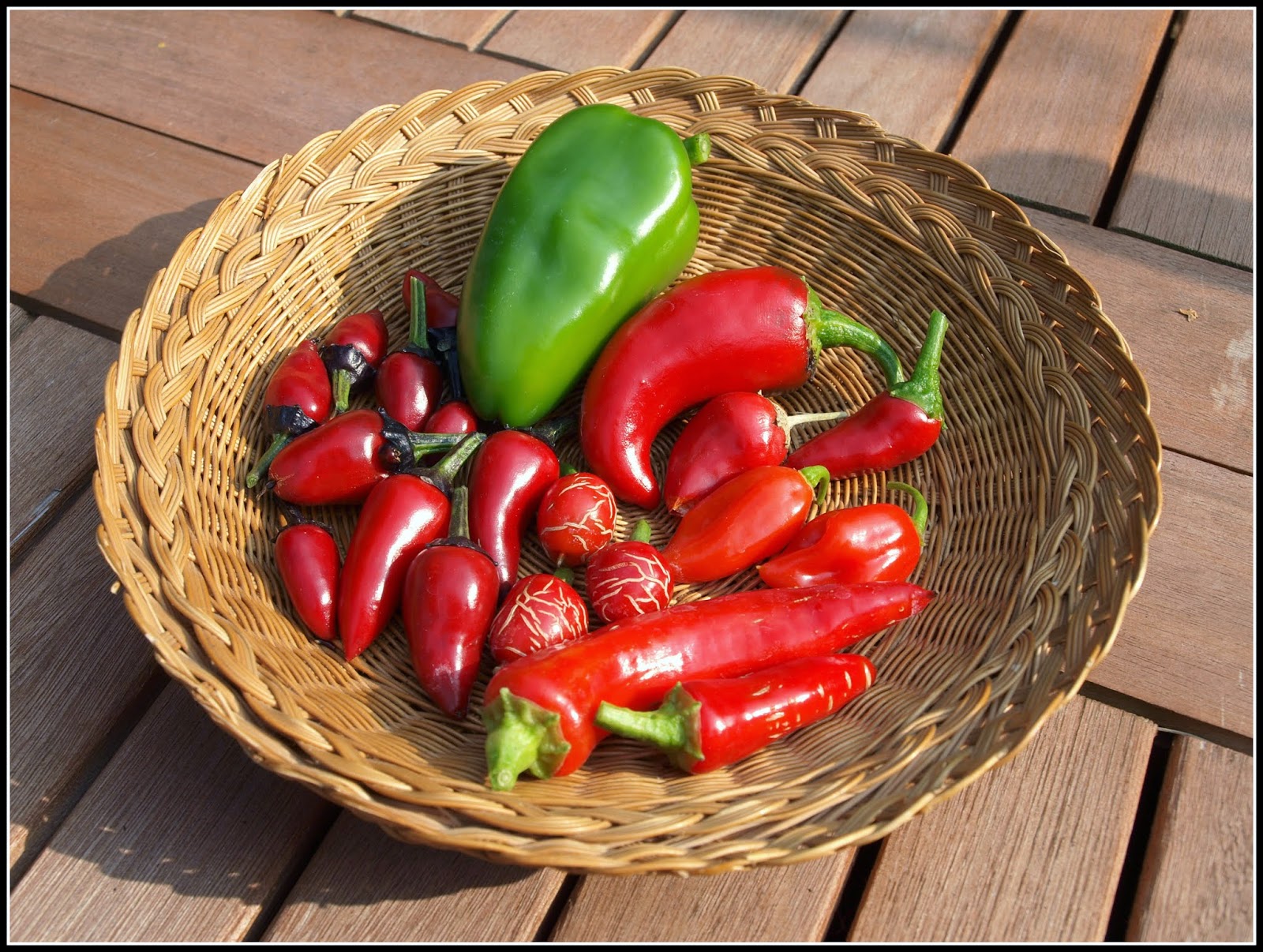 In the front of this basket are two "Ohnivec". The big one is the most representative of this type, which produces some very big fruits.


Behind them are three "Red Jalapenos". Although they have the "crackled" markings so characteristic of this type, their shape is far from normal! These are the first fruits to ripen on this plant, and are from low down - in other words on the stems most badly affected by the contaminated compost issue. The other, later, ones are more of a normal shape - in other words long and cylindrical.


These next two are "Red Habanero", from the plant I kept from last year.


The dark red ones are "Nosferatu". On the plant label it says they develop into a "Blood red" colour. I can see what they mean. It's a much deeper red than most of the others. 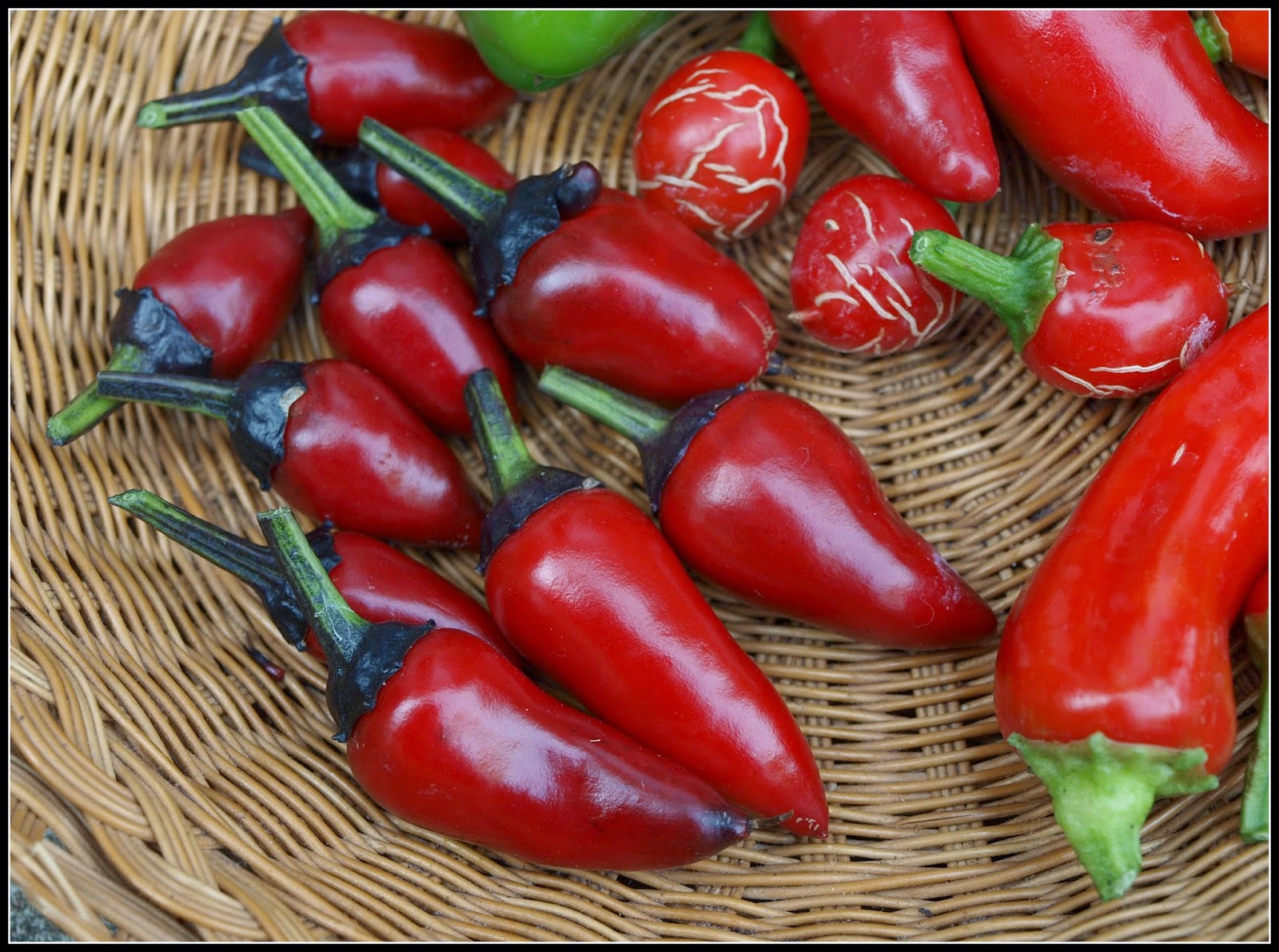 Then there is "Ring of Fire"... These ones are definitely not right. "Ring of Fire" is normally long and slim, but these ones have come out short and fat!


And let's not forget the green pepper, which is "King of the North".  I'm harvesting it green because Jane likes eating them when they are at that stage. 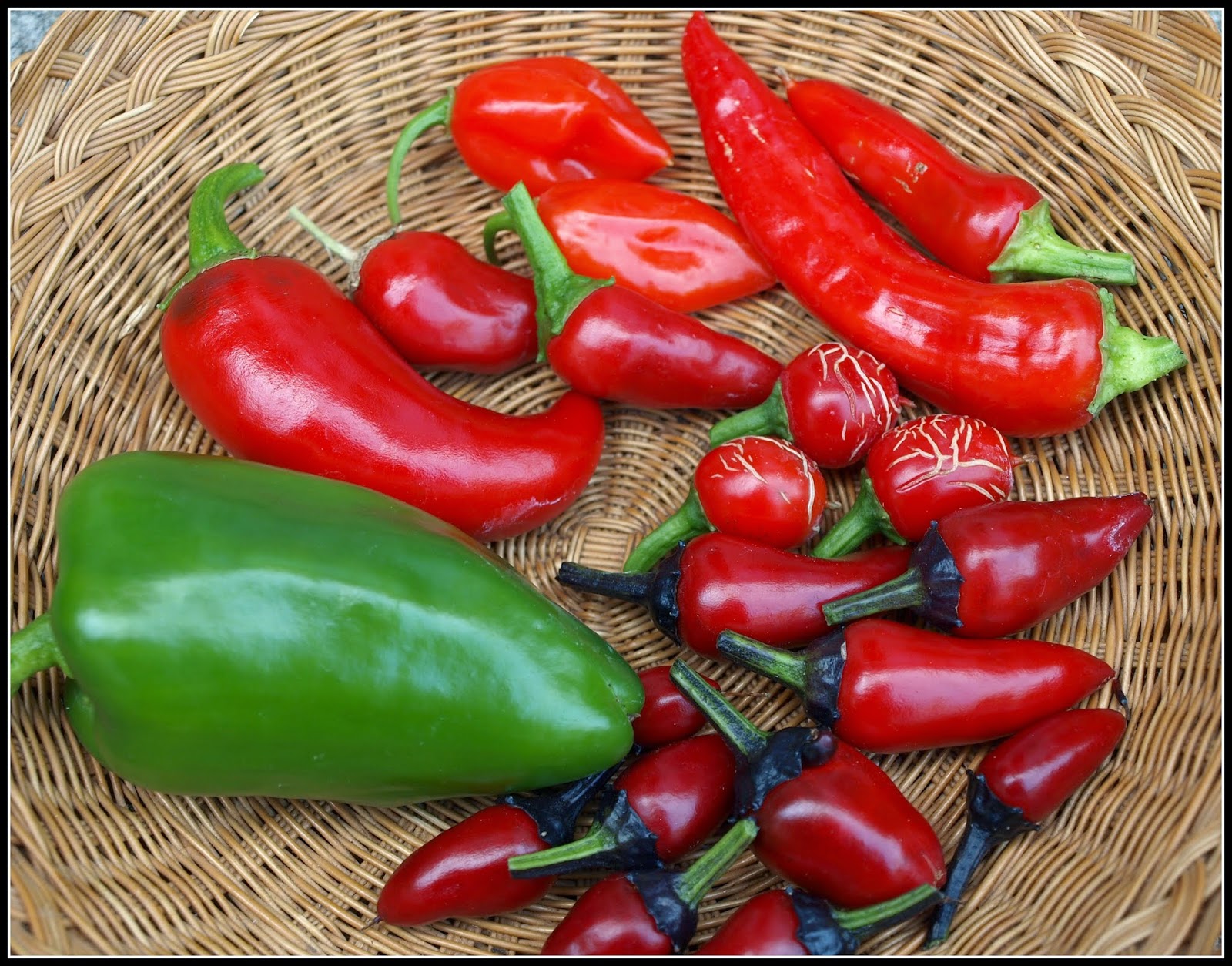 You can perhaps tell from the quality of light that these pictures were taken in the late afternoon on a sunny day. That's what makes the difference with chillis, you know, sunshine! They love it. If we have some more of it there will soon be more ripe chillis. 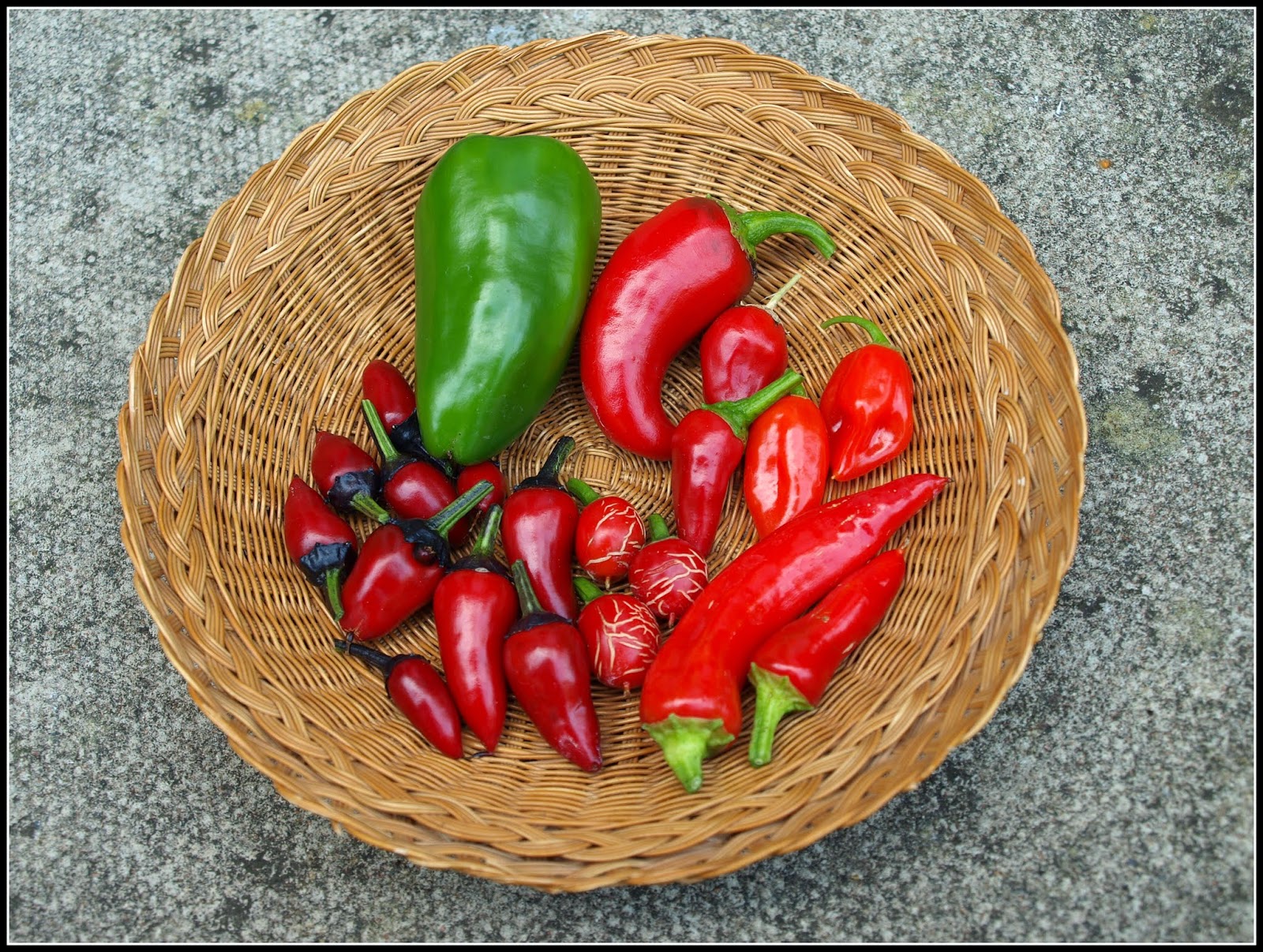 What is it that determines the taste and the amount of heat in a chilli? I know that some varieties are naturally hotter than others, but even so, the heat in a chilli can vary a lot from year to year. In the past I have purchased seeds described as "atomic" or "volcanic", only to find them quite mild. I think that the heat (and flavour) of a chilli is determined by soil composition, weather, and feeding (or lack of it).

This year, I had decided not to feed my chillis, even though in the past I have habitually fed them with "Tomorite" proprietary tomato-feed. I also planned to water them less. This plan was of course to be combined with a long hot Summer! I felt that this combination would produce "hard" plants, which would put most of their energy into reproduction rather than ornament - that is to say (hopefully hot) fruits rather than soft leaves. Well, one of these proved possible (the lack of feeding), but the cold wet conditions during August (prime time for chilli ripening), put paid to the rest. I'm sure most you also know that issues with contaminated compost further exacerbated the challenge. My plants have produced pale yellow sickly-looking leaves, with a matt finish instead of the usual glossy dark green. In this photo you can see them ranged in a row in front of the netted brassicas. 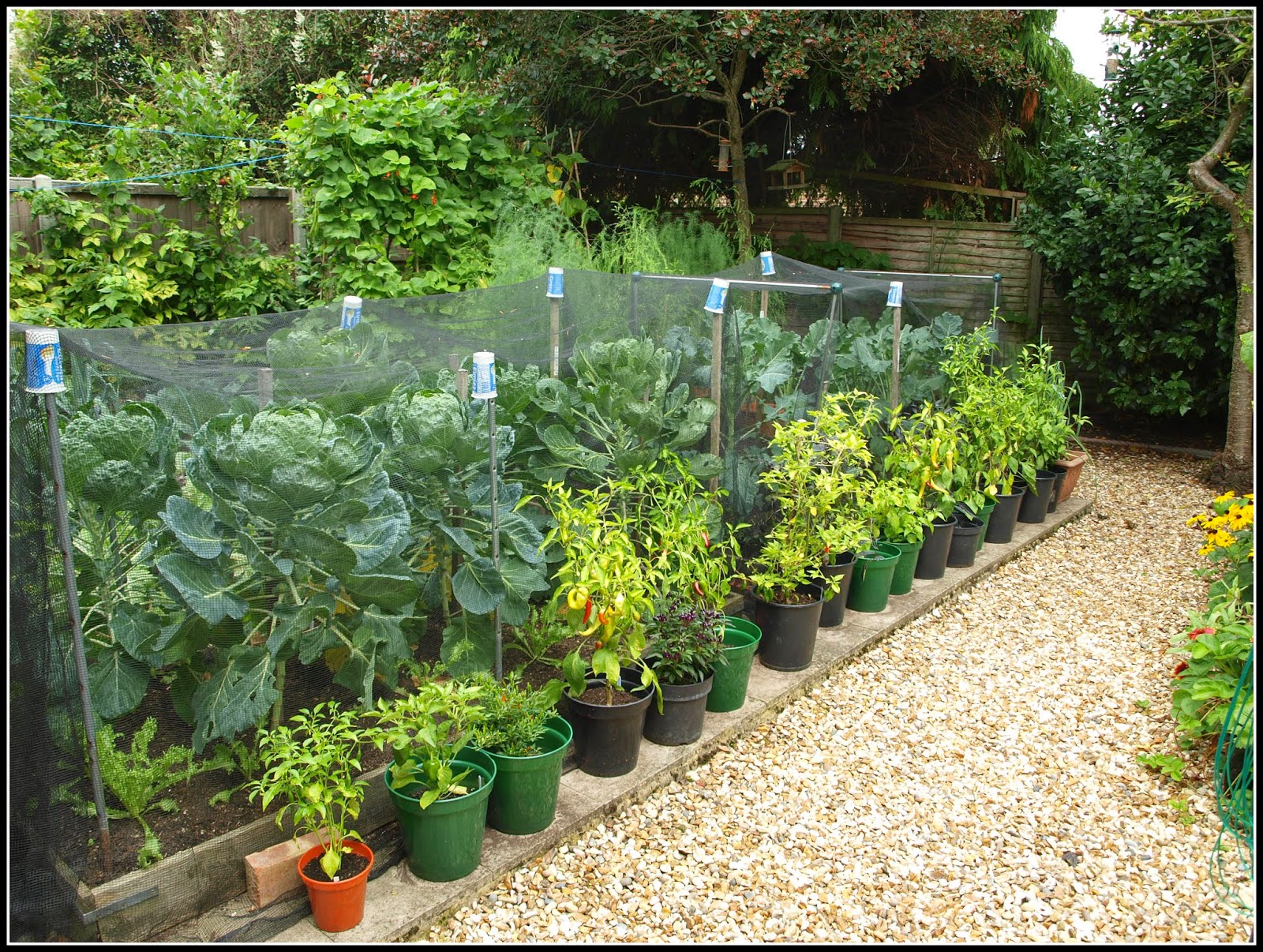 As soon as I get a worthwhile quantity of ripe fruit, I will conduct a heat- and taste-test. If the heat and taste is good, then I won't worry so much about the look of the plants, but at present it looks as if next year I will revert to the usual feeding regime.
Posted by Mark Willis at 12:00