Sometimes when I'm cooking a meal I don't really decide exactly what I'm making till the very last minute - and even then I sometimes make adjustments "on the fly".

Last Saturday was an occasion like that. We went shopping in the morning and bought (amongst other things) a nice Pork Tenderloin at a very reasonable price, so I decided to make "something" with that as its basis. Eventually I settled on a vaguely (very vaguely) Eastern European dish involving medallions of the tenderloin beaten out flat: 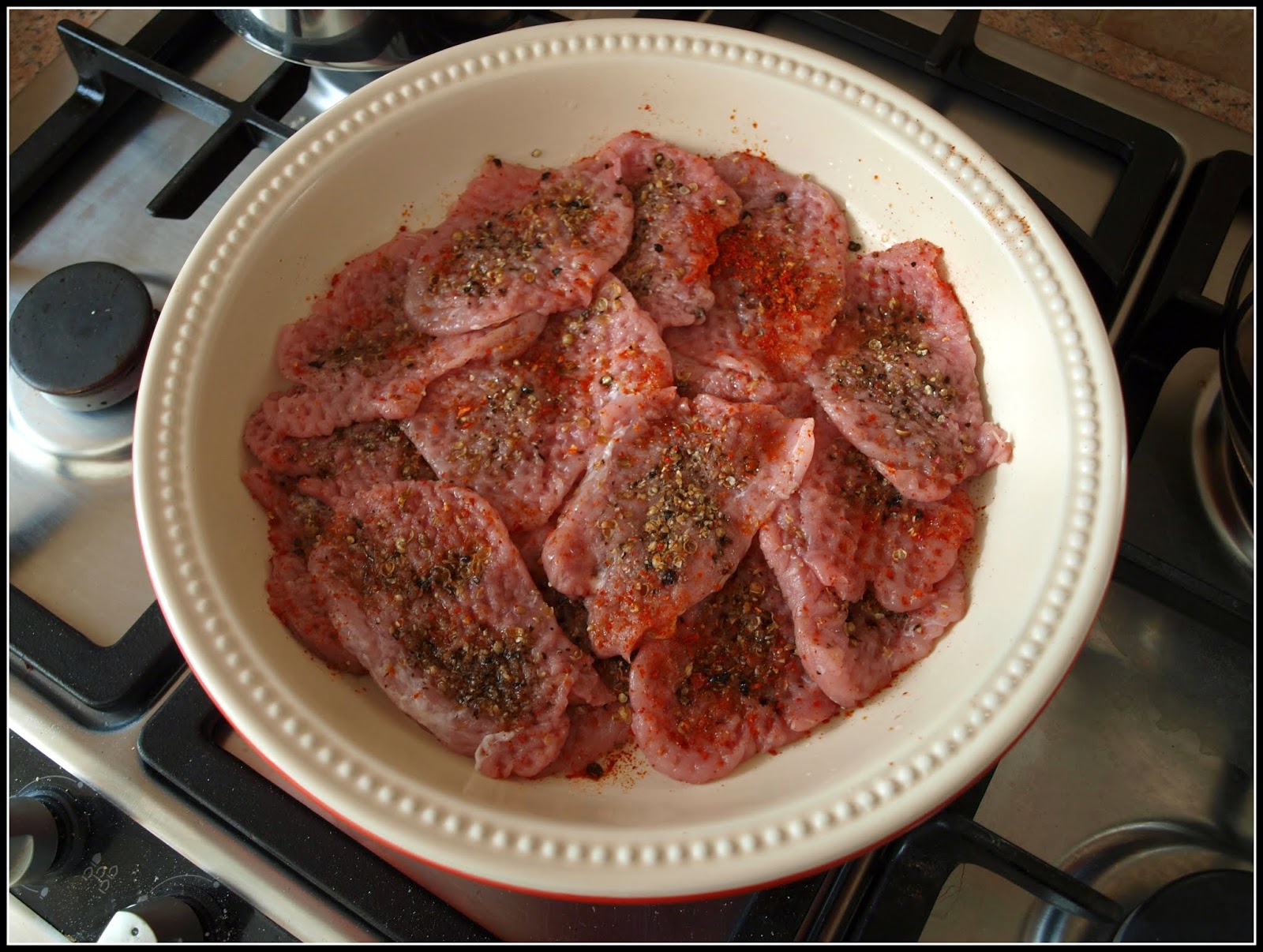 To get the meat like this you cut the tenderloin into slices about an inch thick and then flatten them with a meat-mallet, or the blunt side of a cleaver. Before beating out the meat I sprinkled it with a mixture of crushed coriander seeds, black peppercorns and (home-made) paprika. The flattening process works the spices into the meat.

I left the meat to marinate in the fridge for about four hours, and eventually cooked it very briefly on a searingly-hot griddle pan. I had so many pieces of meat that I had to cook them in batches and keep the first ones warm while I cooked the others. 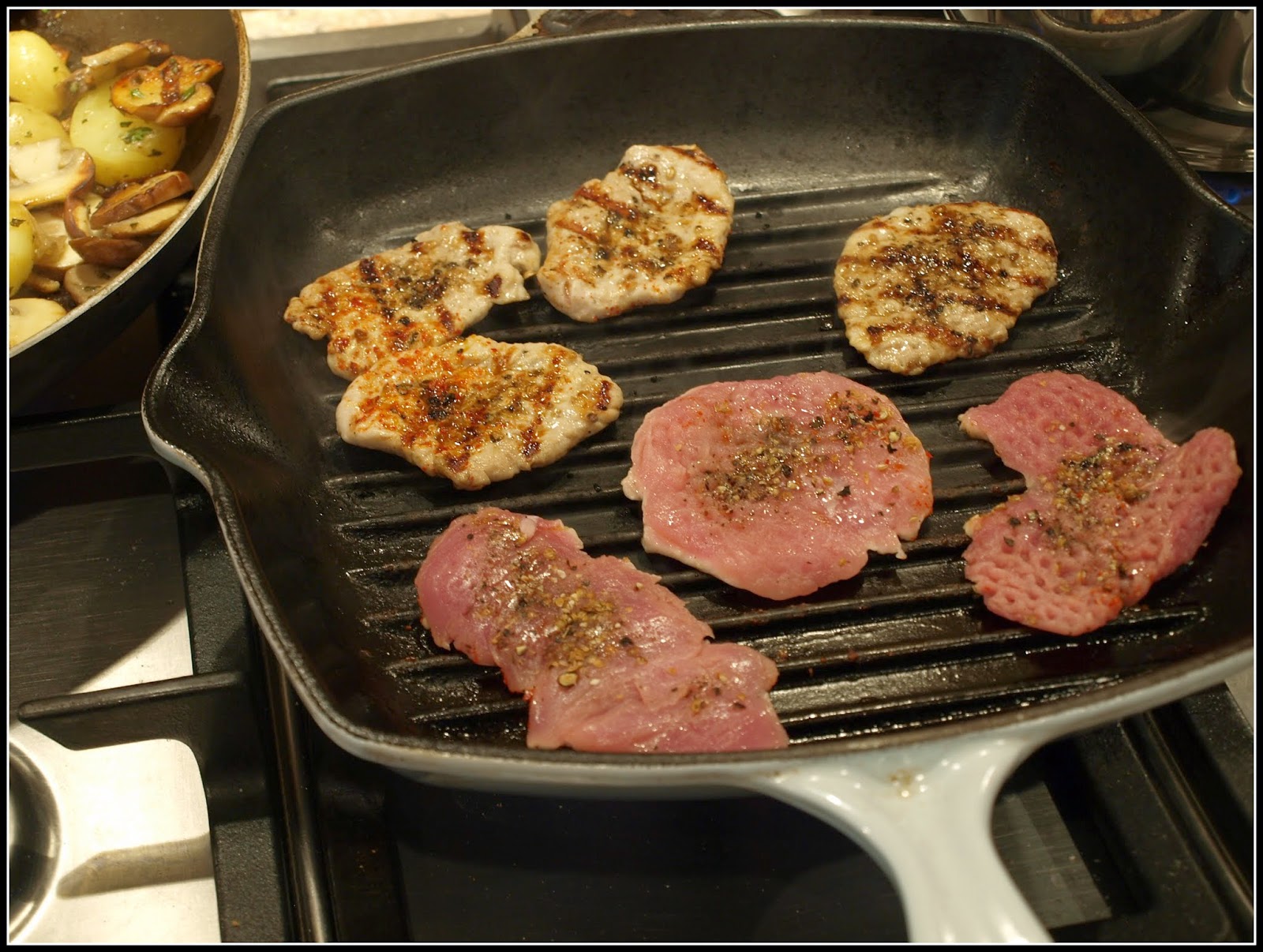 I had originally intended to serve the pork with a mushroom sauce made separately for pouring on at the last minute, along with sautéed potatoes and baby carrots with green beans. I had cooked the potatoes (home-grown "Nicola") in advance, and I was planning to sauté them simply in some butter, with loads of chopped fresh herbs. I had some onions for the sauce cooking very slowly in another pan. However, when I went to light the gas under the griddle-pan I realised that I didn't have enough cooker space and I had to do one of my "on the fly" adjustments. The potatoes had to go in together with the onions, herbs and mushrooms: 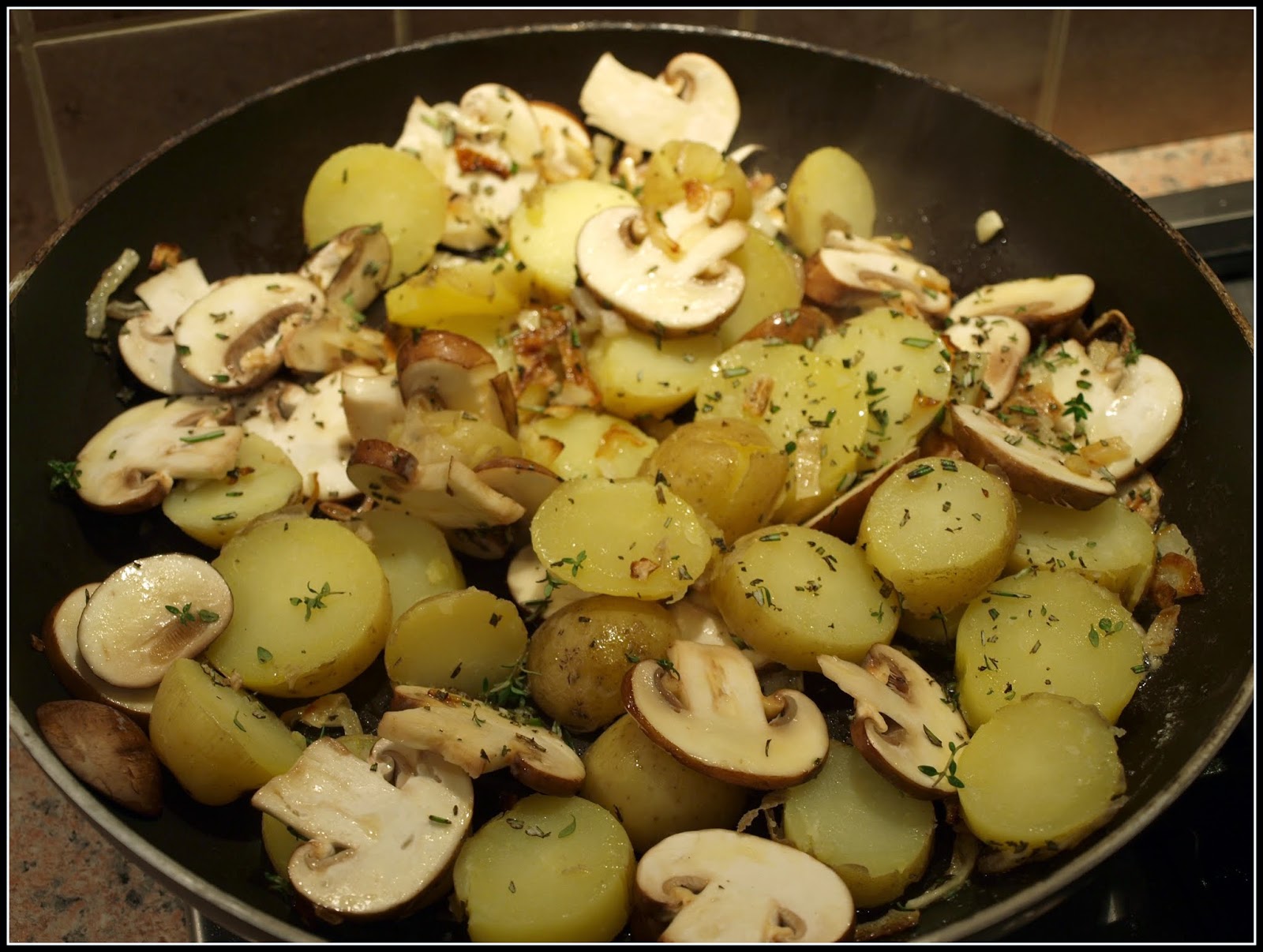 The herbs I used were Rosemary and Thyme. I think Thyme goes particularly well with mushrooms. I made a point of chopping the Rosemary very finely, because if the leaves are left whole they can be unpleasantly tough. A couple of minutes before serving-time, I added about 200ml of Elmlea, a staple ingredient in our house (you could use cream, of course), and stirred it in to make a sort of creamy sauce. 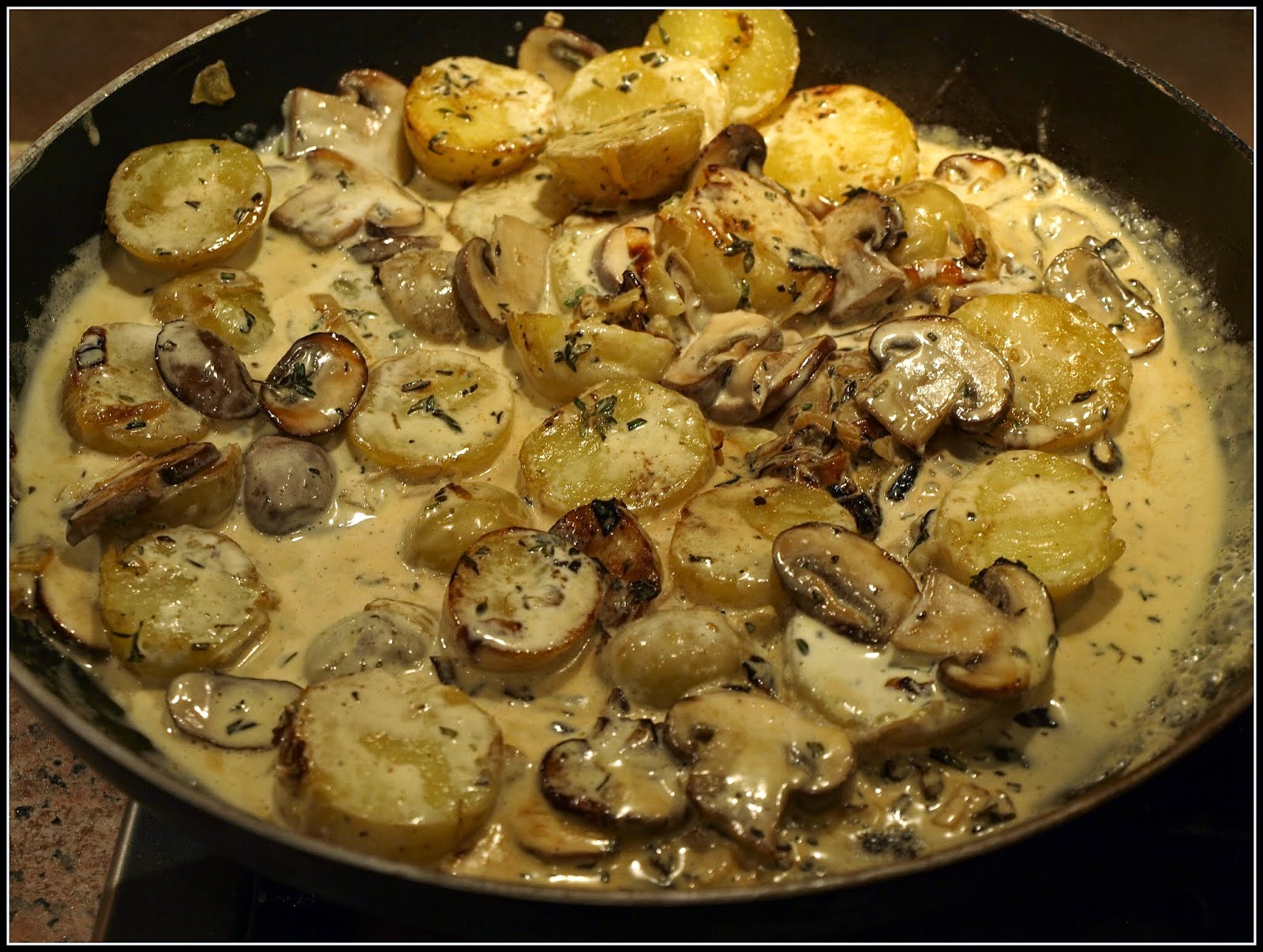 By this time the carrots, green beans and all the pork medallions had been cooked: 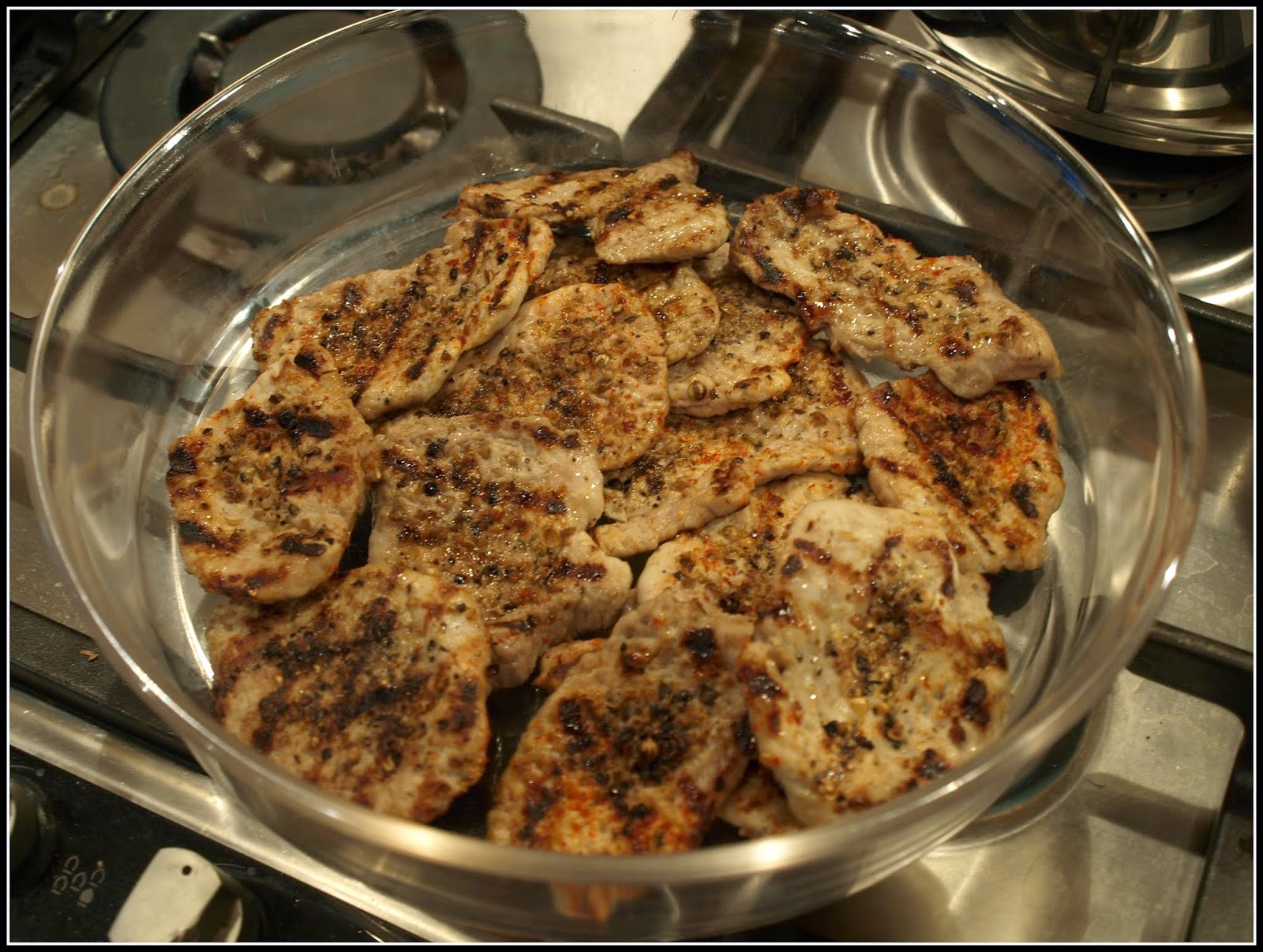 So it was just a case of dishing-up.

Now, at this point I should really show you a couple of photos of the finished dish, but unfortunately on this occasion I am unable to do so - for the simple reason that the photos accidentally got deleted from my camera before I had uploaded them! Grrrrrrr!

So you'll just have to imagine it. Soft, quickly-cooked meat with the citrusy tang of coriander and the warmth of paprika and black pepper. Super-tasty, super-fresh, vibrantly-coloured carrots and beans. The earthy flavour of soft chestnut mushrooms. The comforting waxiness of firm new potatoes. And all brought together in a smothering of that creamy, herby sauce.

I was pretty pleased with the result. In retrospect, a squeeze of lemon juice just before serving would probably have been an improvement.... but I didn't think of that at the time.
Posted by Mark Willis at 12:00