August is the month in which I get my most varied harvests, so this week I have lots to report. 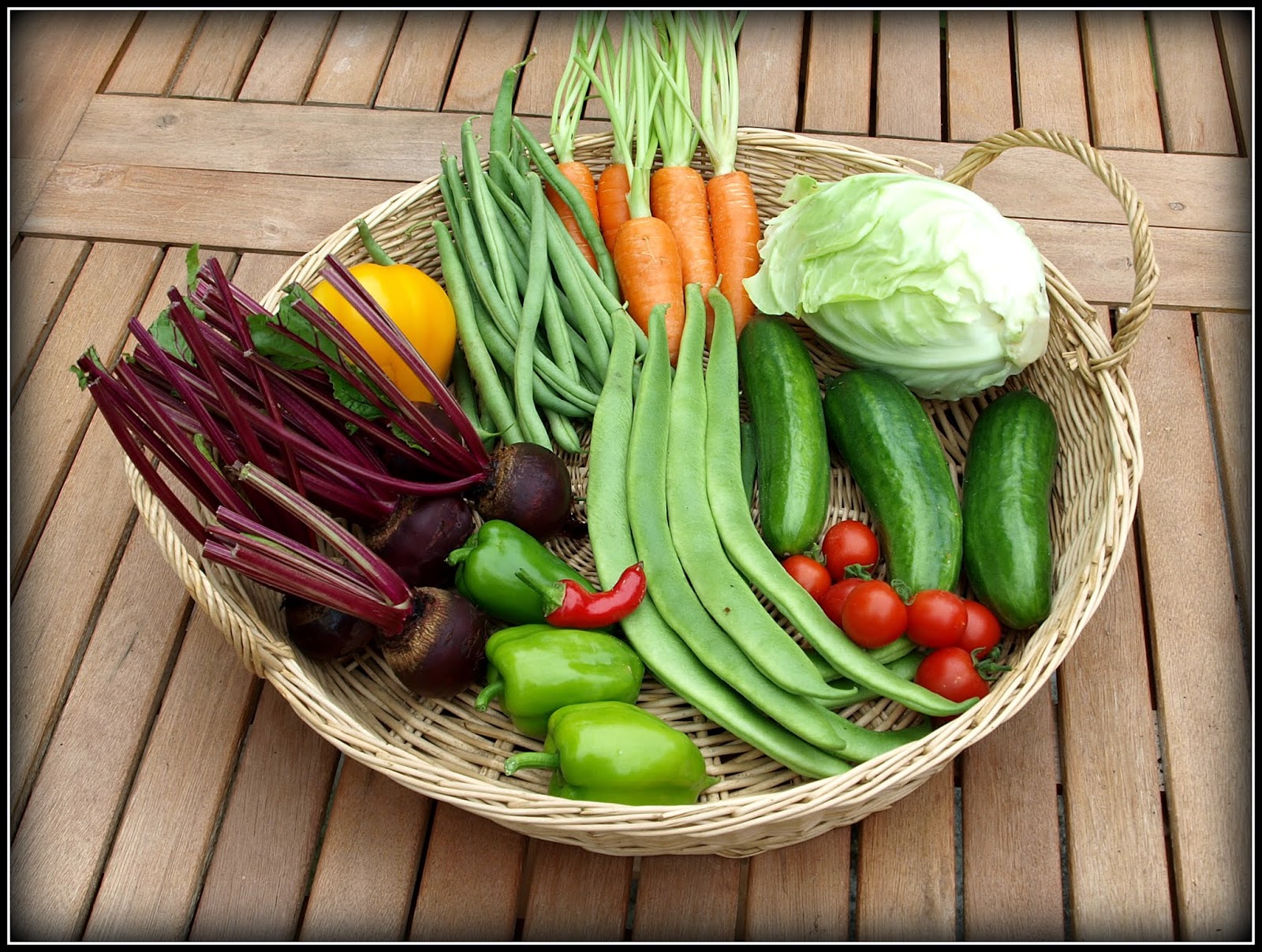 At the left of that photo are these "Boltardy" Beetroot. 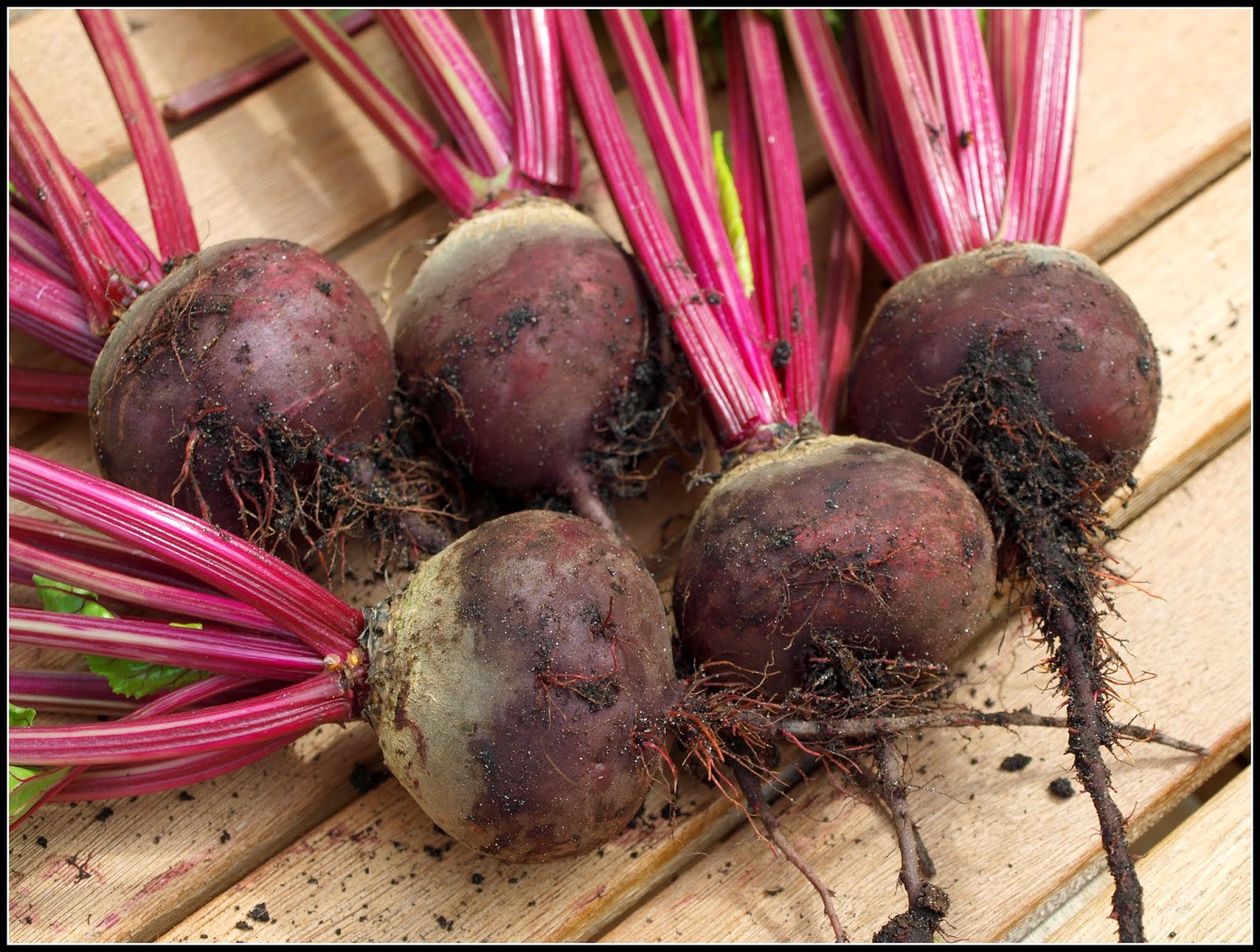 "Boltardy" is a good reliable variety of Beetroot, named after its good resistance to bolting. I like to harvest Beetroot at a size that is bigger than a golf ball but smaller than a tennis ball. Any bigger than that and they could perhaps be a bit tough. 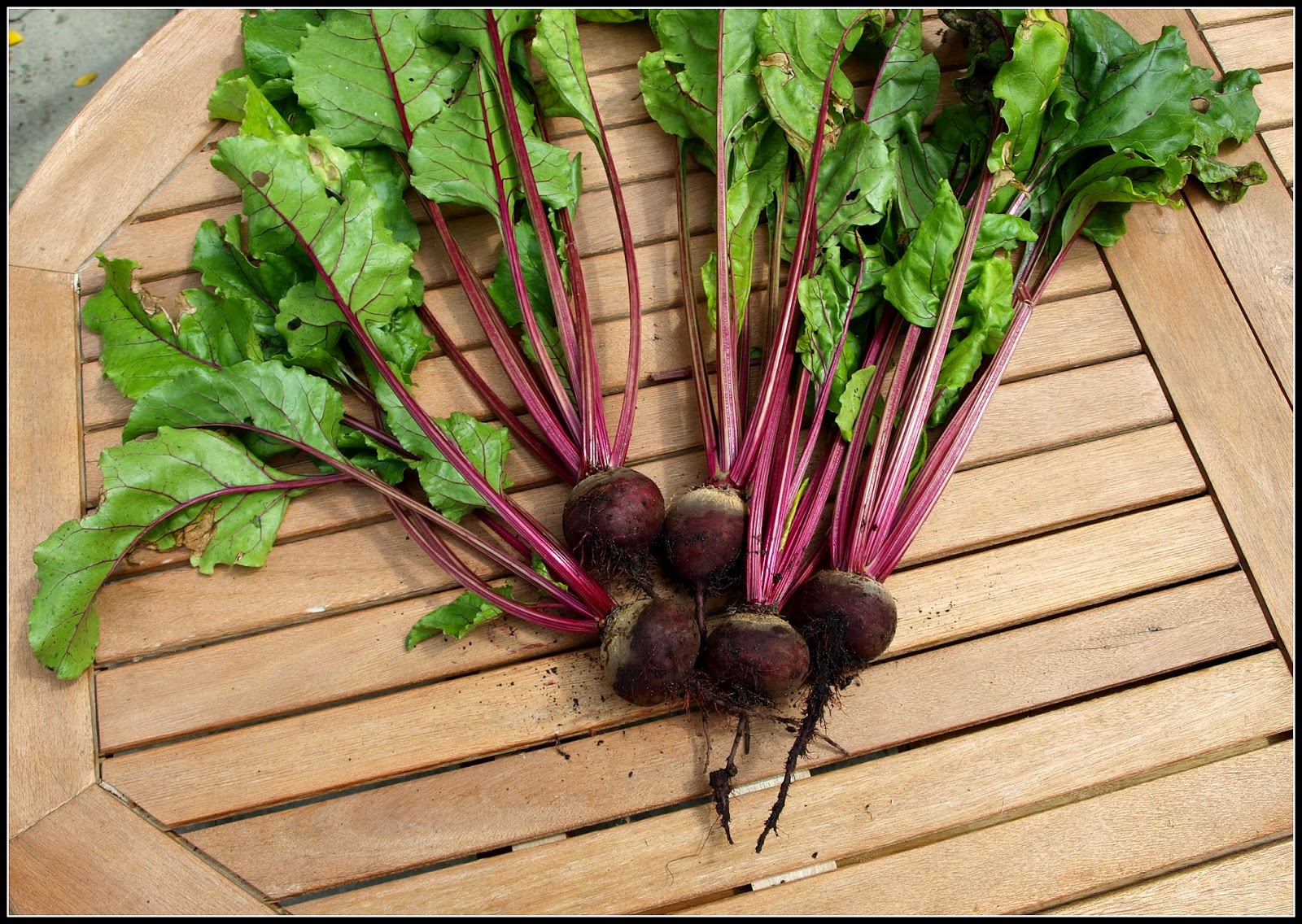 At this time of year I pick a few beans every day, and usually a cucumber too. 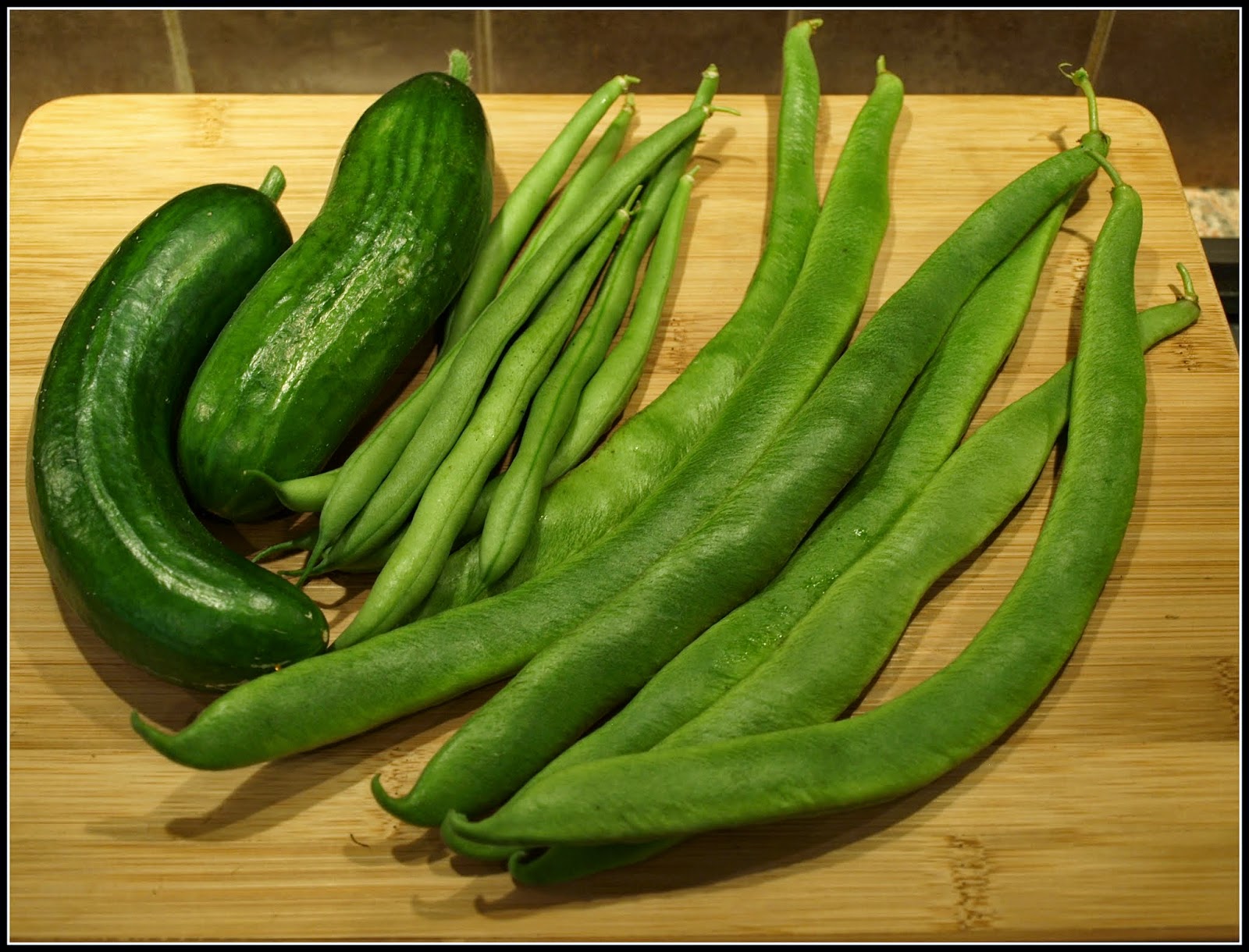 With vegetable crops it is important to keep picking the fruits, because if you don't the plants will stop producing new ones. Besides which, mature (old) beans are tough and not very appetising, whereas young ones are tender and delicious. Mature Runner beans develop a stringy membrane between the flesh of the pod and the bean itself, and this is not pleasant to eat.

My cucumber plants are producing fruit at a sensible rate, (I'd say an average of one a day) and this year I have Jane to help me eat them (this time last year she was in hospital). In the past I have given many cucumbers to my daughter Emma for her family, but now they grow their own and I don't need to do that any more.

Ripe tomatoes continue to trickle in. It's not the bountiful harvest I want, but it's not too bad, all things considered. 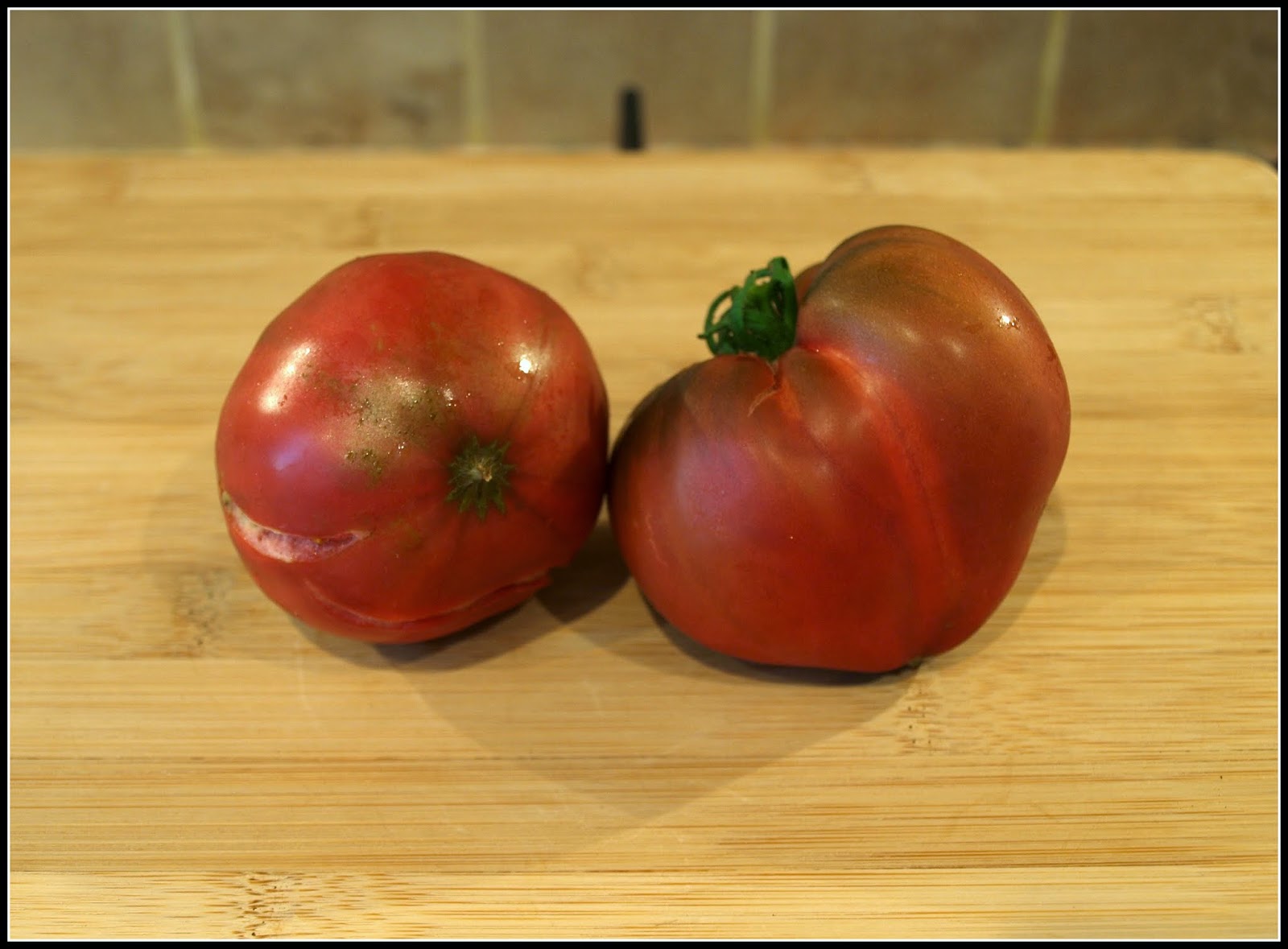 Theoretically, that is one each of "Giant Syrian" (left) and "Noire Charbonneuse" (right), although I'm not convinced. They look the same to me. They are probably both "Noire Charbonneuse", because "Giant Syrian" is supposed to be much redder than these, and much bigger too. I think there may have been a mix-up when a friend sent me the seeds. The one on the right is a nice specimen, but the one on the left is heavily cracked and split all the way round. 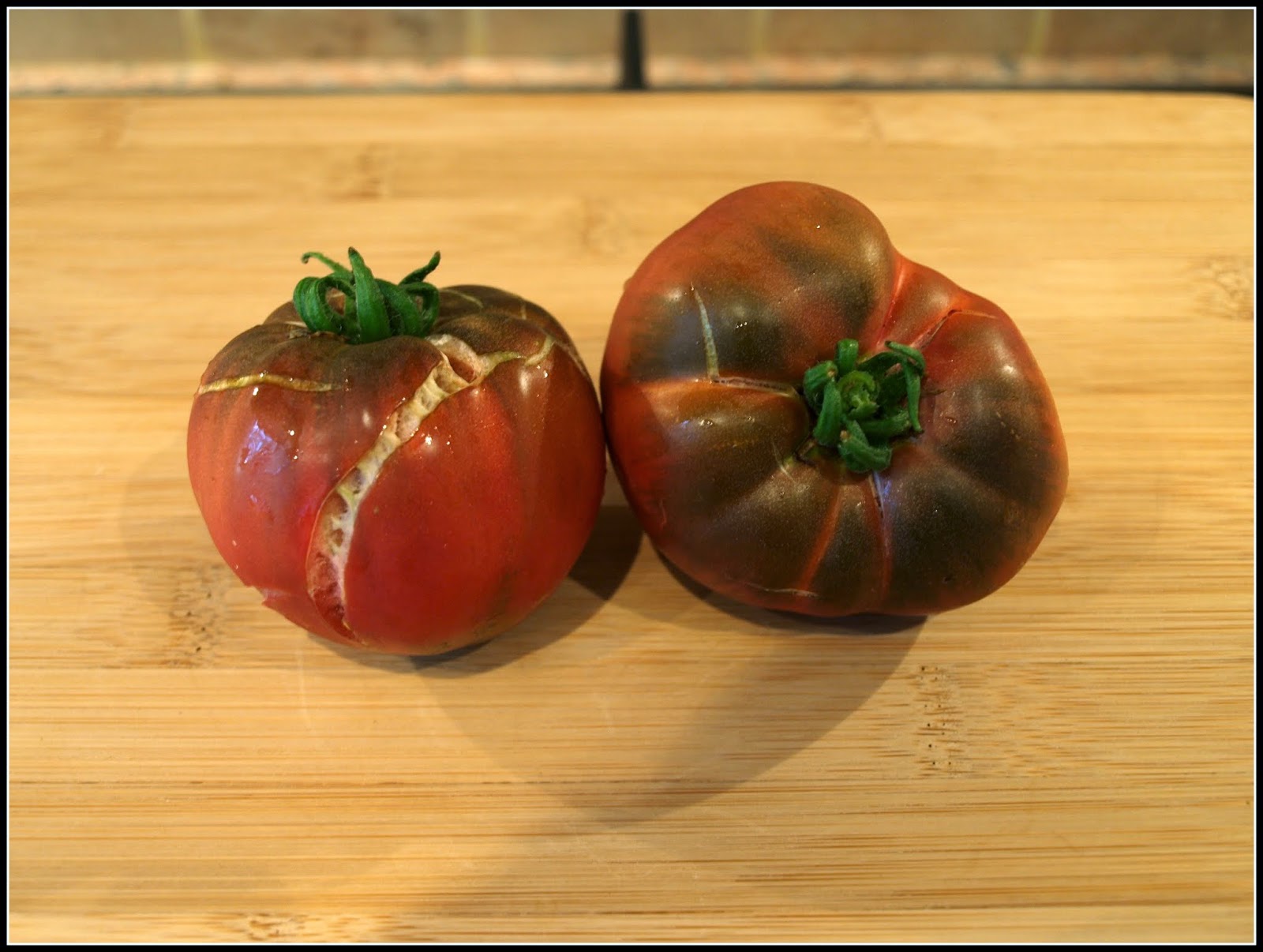 Tomatoes like that are still useable of course; you just have to prepare them carefully, and eat them promptly before mould has a chance to set in.

The potatoes are still going too. I had 26 pots of them, and there are 7 left now. This batch of 776g of "Nicola" was harvested on Thursday: 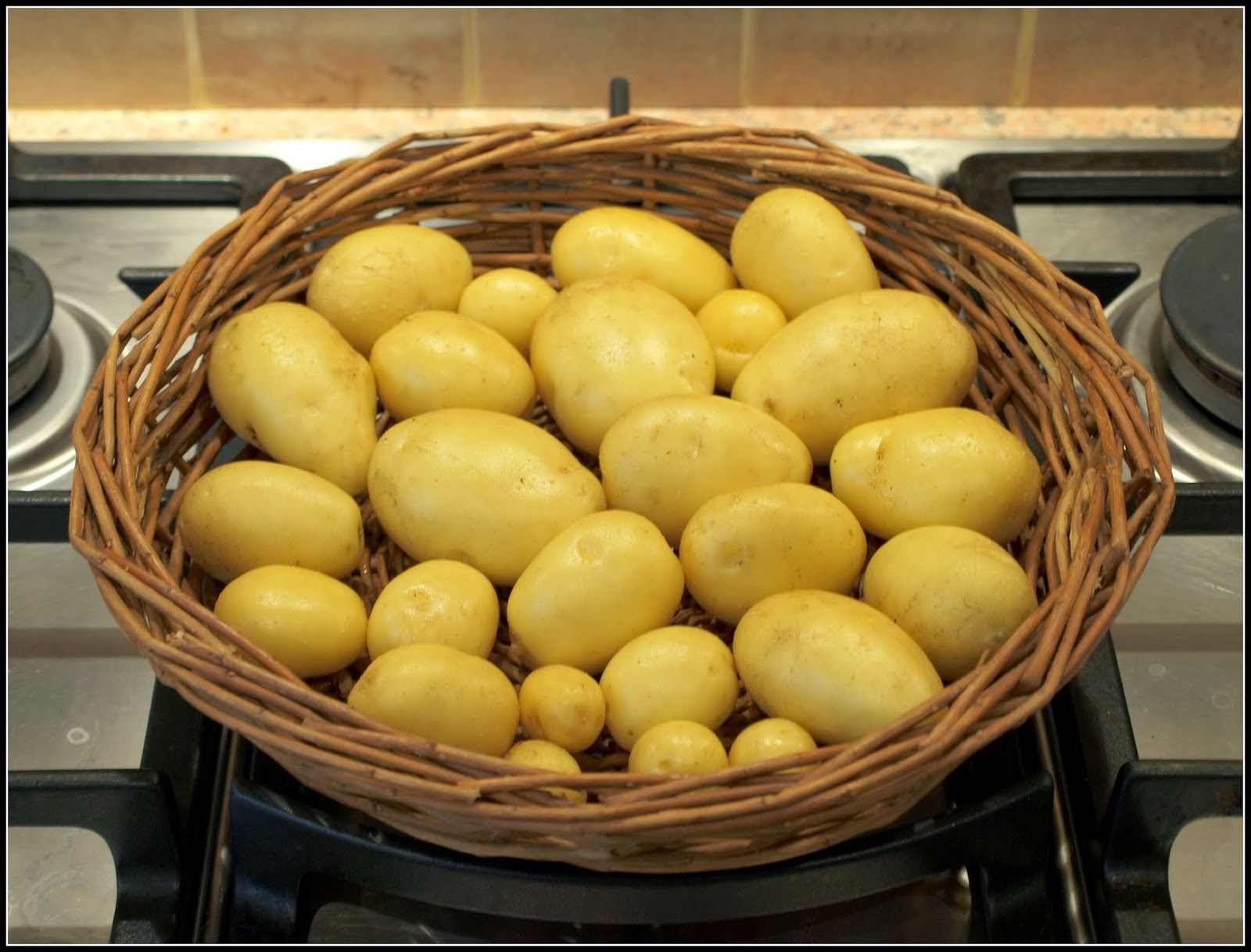 This week I also took up a few more carrots: 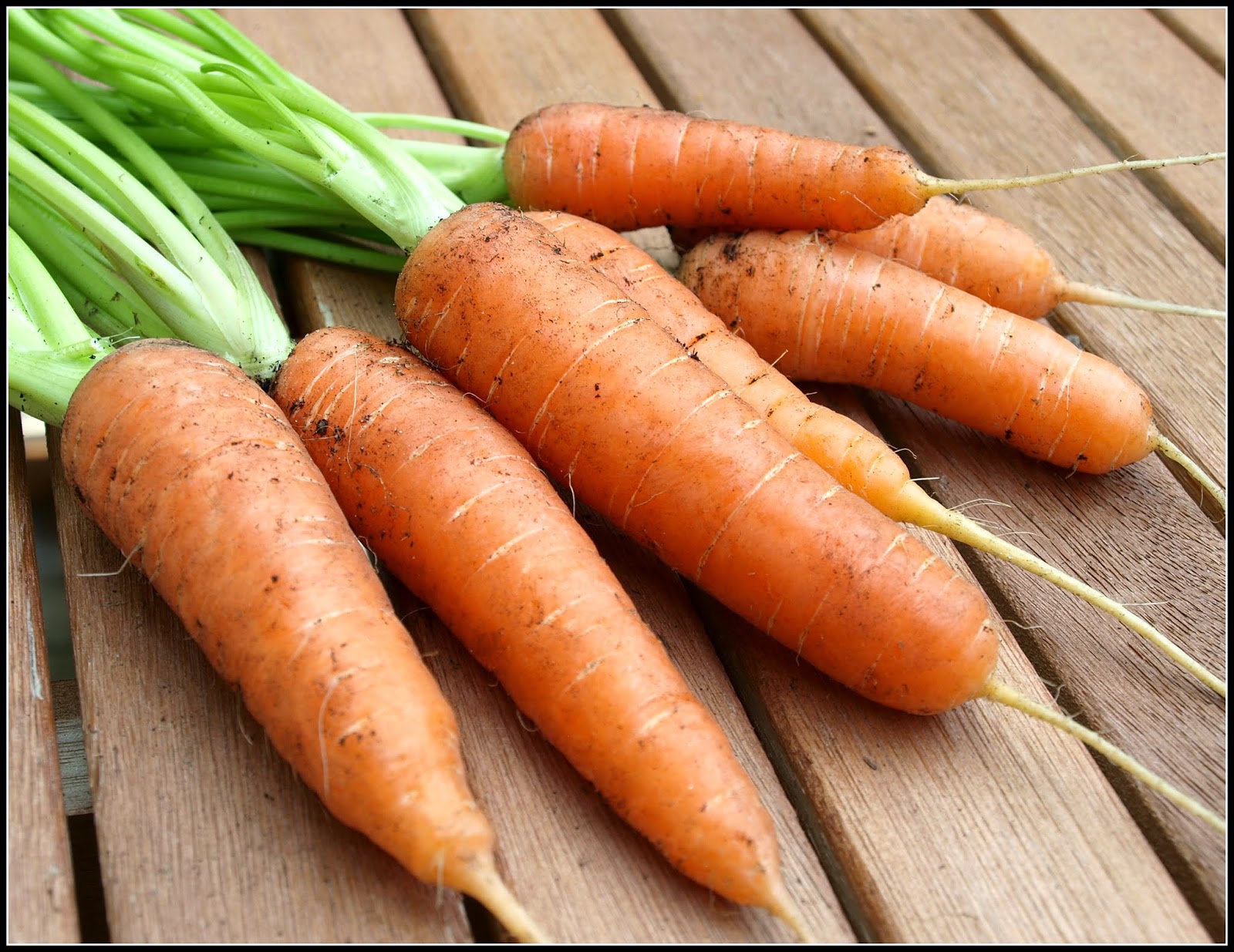 I'm very pleased with those! The best Carrots I have ever grown, without a doubt. The Enviromesh has certainly been worthwhile. My only concern at present is that the foliage of the nearby Parsnips has got so big that it is blocking out the light to the Carrots. Therefore, after pulling up those Carrots, I snipped off a load of Parsnip leaves. Let's hope they manage OK without them! 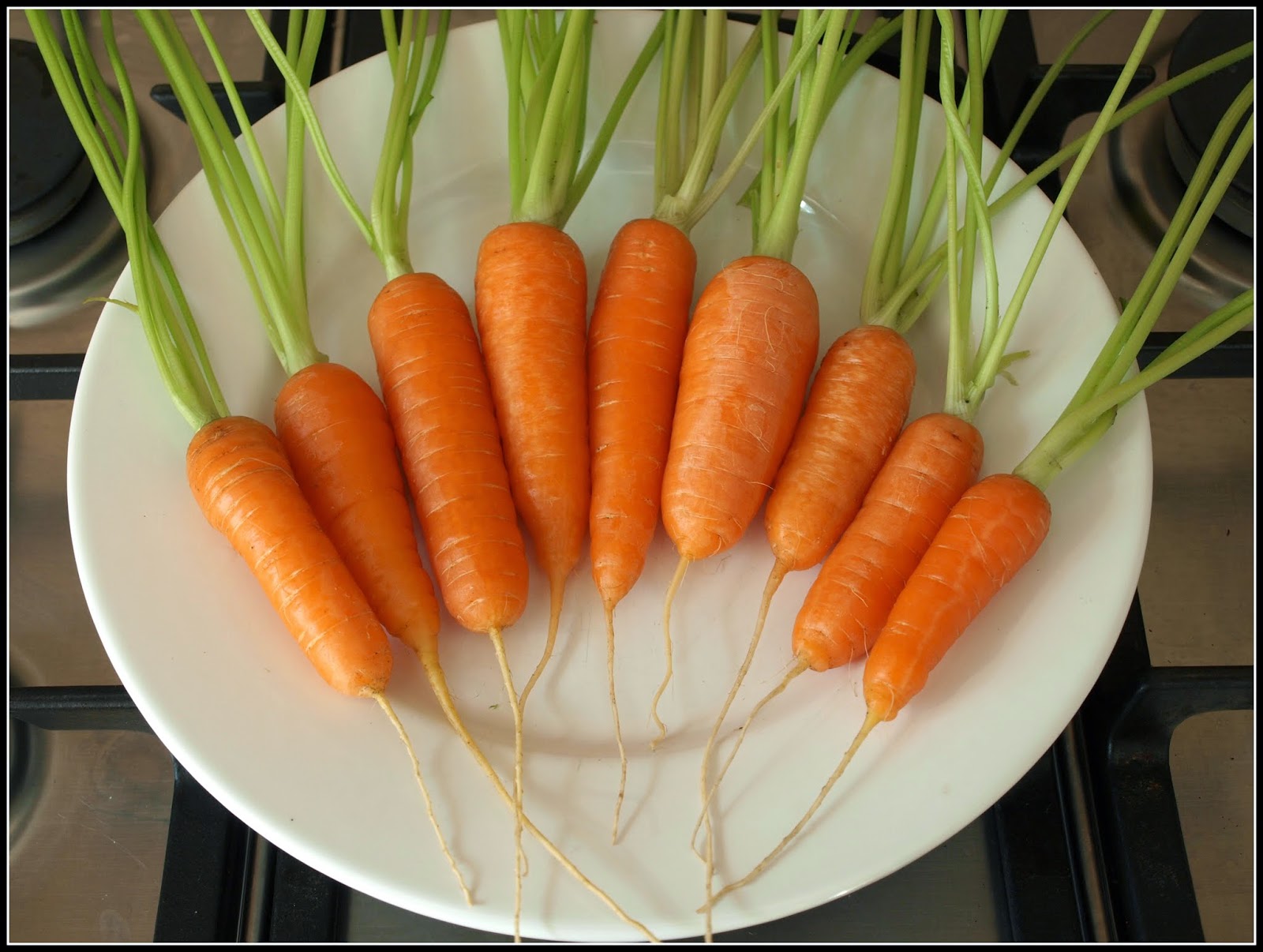 I didn't really want to harvest this: 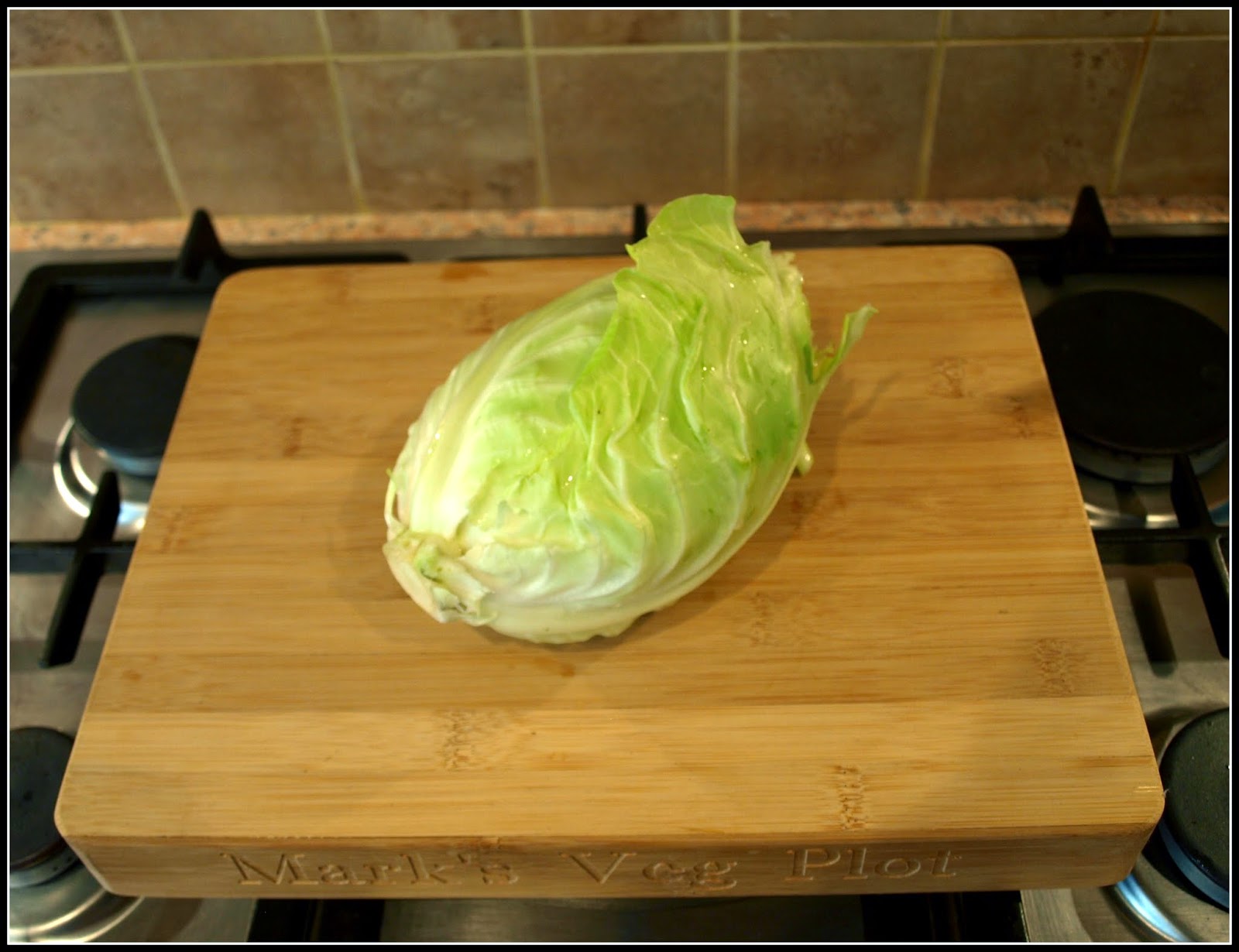 It's a "Caramba" Cabbage. As I said, I hadn't really been meaning to harvest it just yet, but the outer leaves were beginning to show a bit of caterpillar damage, so I thought it best to cut it while the going was good. The bit in my photo is just the heart - the useable bit, in other words. It was nice and densely-packed, weighing about 525 grams.

As you can see, I also harvested three green peppers. Two of them are the "Turkish Sweet Pepper" type and one is a "King of the North". I dislike peppers because they give me violent indigestion, but Jane likes them, especially when they are still green. She likes them in a dish that involves tinned Tuna and red onions. 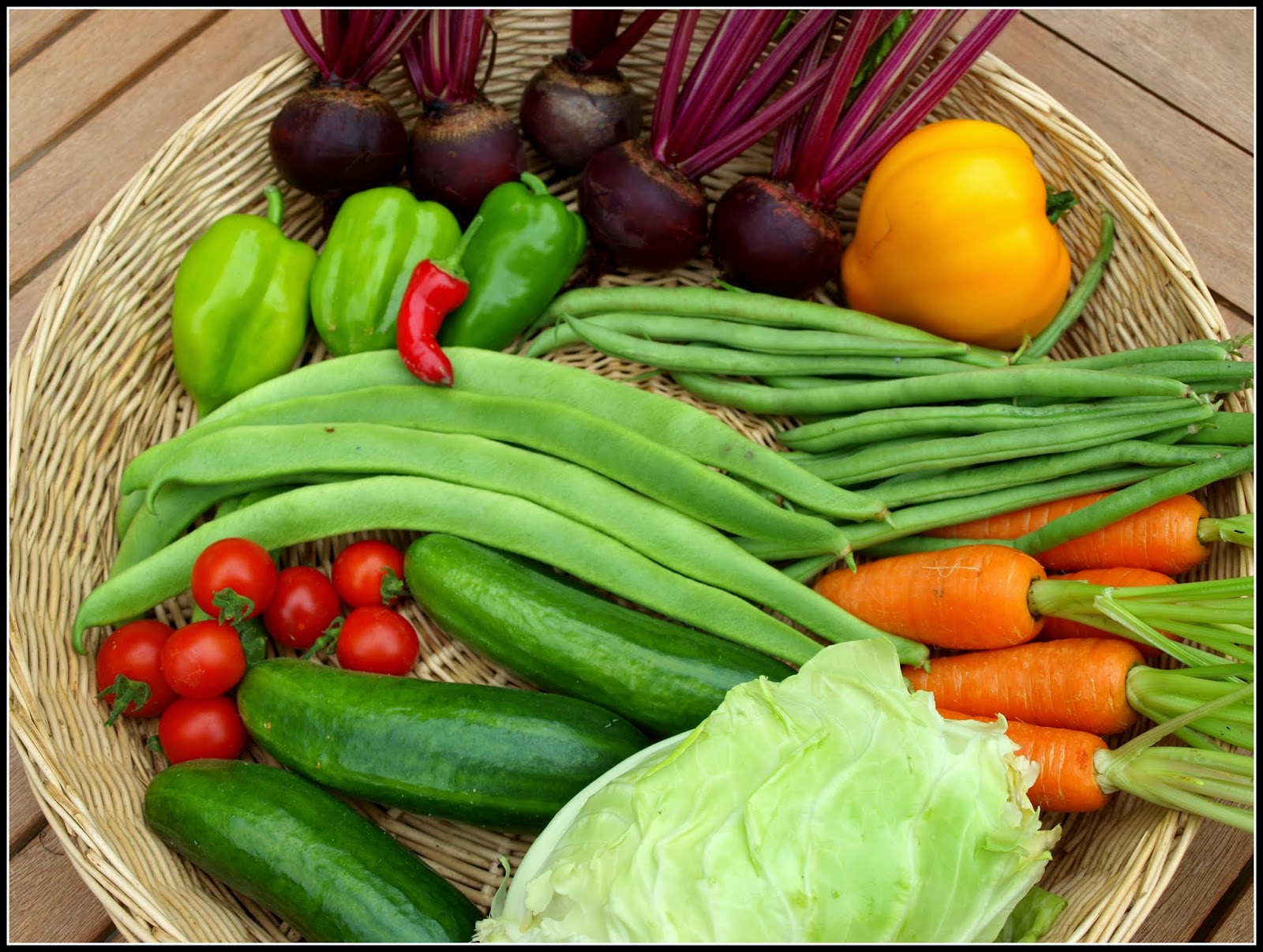 Notice the solitary big yellow tomato in the basket. It is a "Dynnye". A very nice tomato, in my opinion. firm and meaty, with a good taste.

On Sunday, just as I was finishing writing this post, I picked another load of veg, so I had to just squeeze in this photo: 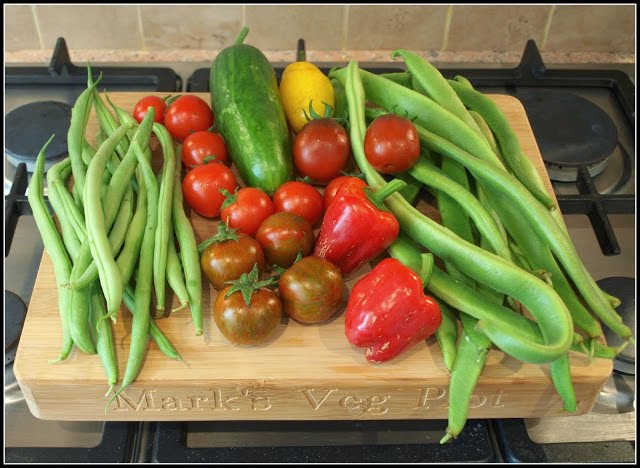 I wish I could have such varied harvests all the time!

This is my entry for Harvest Monday, hosted by Daphne's Dandelions, where I'm sure you will see lots of other wonderful harvests on display.